Famous As: 17th President of the United States
Born On: December 29, 1808
Died On: July 31, 1875
Born In: Raleigh, North Carolina, United States
Died At Age: 66
Andrew Johnson served as the 17th President of the United States (1865 to 1869). He assumed office after the assassination of Abraham Lincoln. Johnson was the first American president to be impeached. He was born in a poor family and lacked a formal education. Before assuming the office of the President, he was a member of the Tennessee legislature and the U.S. Congress, and also served as governor of Tennessee. During the Civil War, he was the only Southern senator who showed loyalty to the Union. In his endeavor towards restoring the Southern states to the Union, he clashed with Radical Republicans. His political life, including the presidency, was quite eventful. Being a well-known politician, he shared his views and thoughts on a number of subjects and issues. We have collected some of Andrew Johnson's famous quotes and sayings from his speeches, interviews, writings, and general life observations.
Listed In:
Leaders 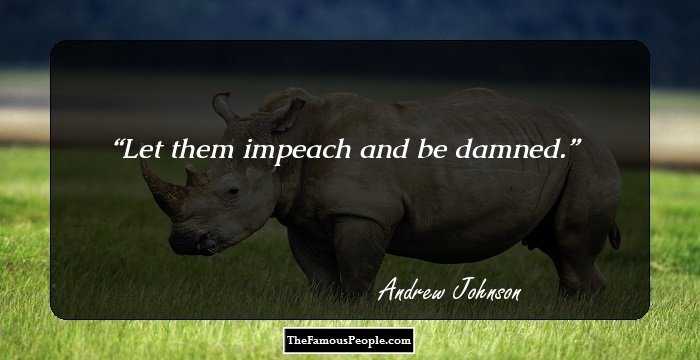 Let them impeach and be damned. 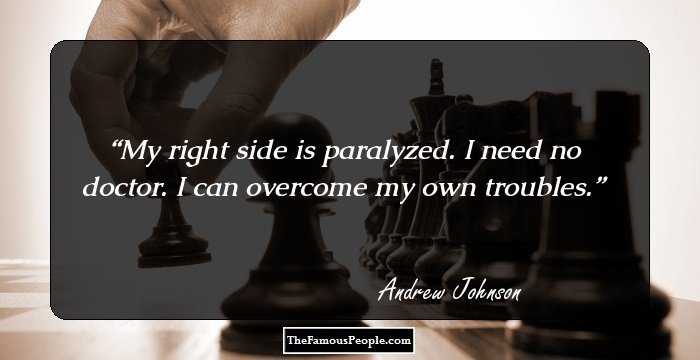 My right side is paralyzed. I need no doctor. I can overcome my own troubles. 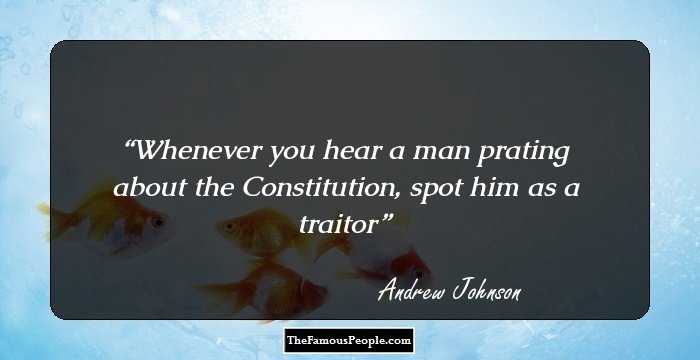 Whenever you hear a man prating about the Constitution, spot him as a traitor 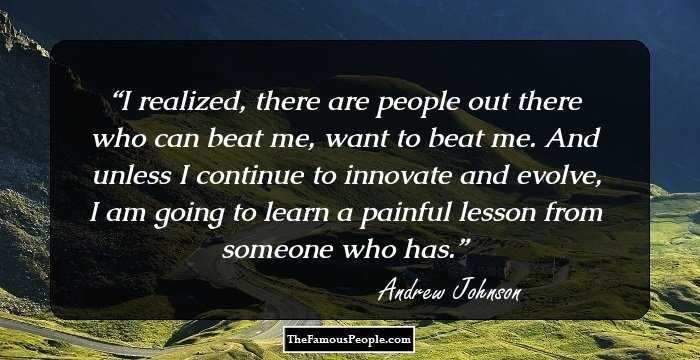 I realized, there are people out there who can beat me, want to beat me. And unless I continue to innovate and evolve, I am going to learn a painful lesson from someone who has. 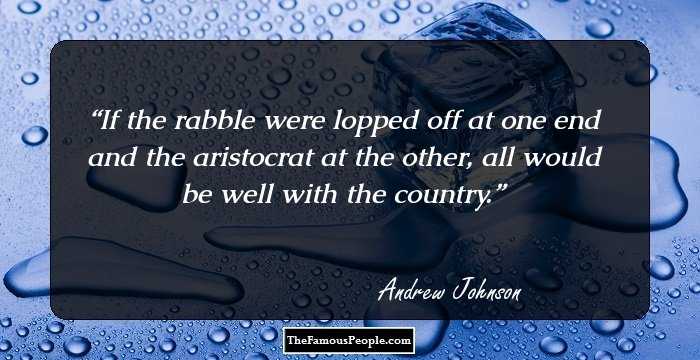 If the rabble were lopped off at one end and the aristocrat at the other, all would be well with the country. 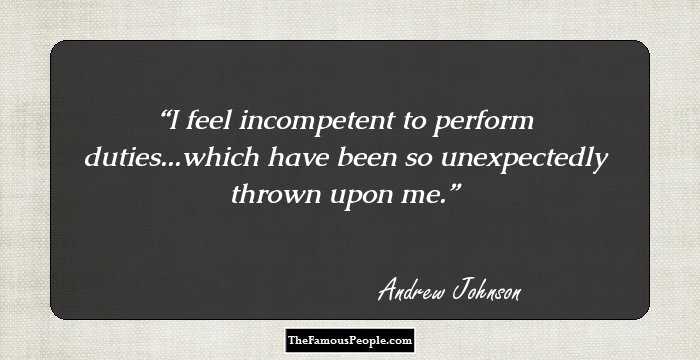 I feel incompetent to perform duties...which have been so unexpectedly thrown upon me. 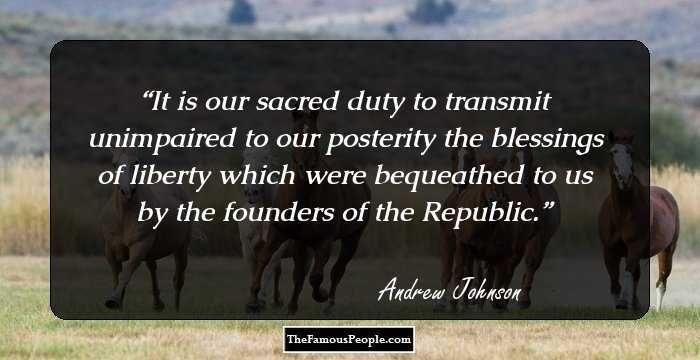 It is our sacred duty to transmit unimpaired to our posterity the blessings of liberty which were bequeathed to us by the founders of the Republic. 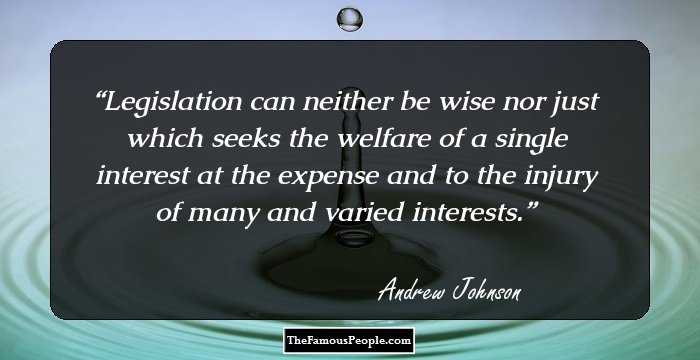 Legislation can neither be wise nor just which seeks the welfare of a single interest at the expense and to the injury of many and varied interests. 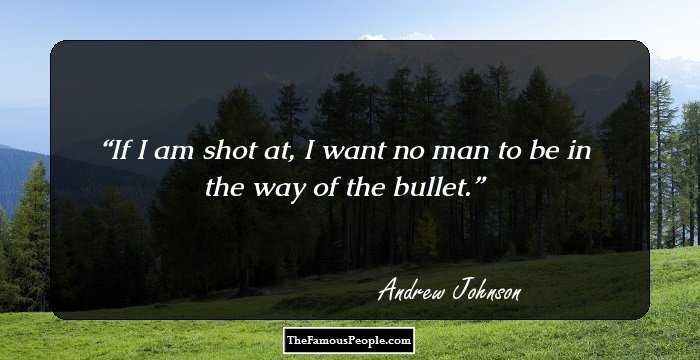 If I am shot at, I want no man to be in the way of the bullet. 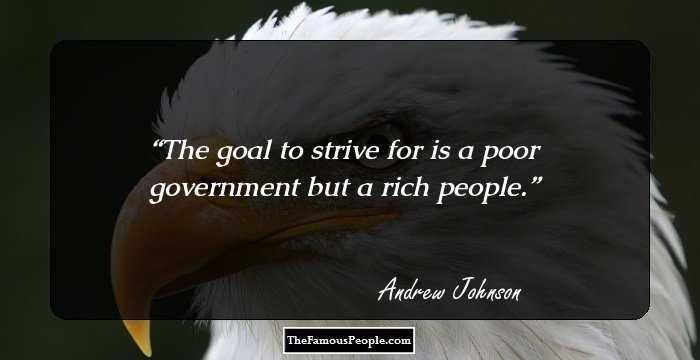 The goal to strive for is a poor government but a rich people. 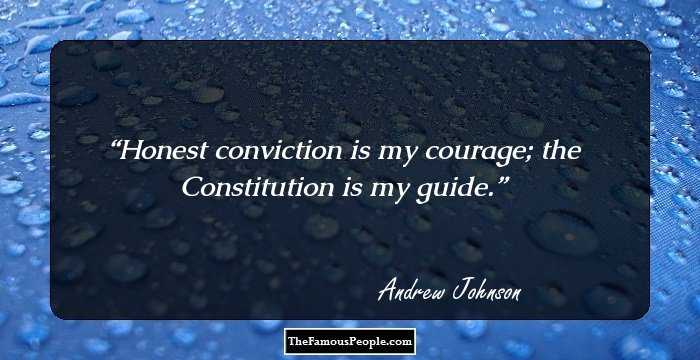 Honest conviction is my courage; the Constitution is my guide. 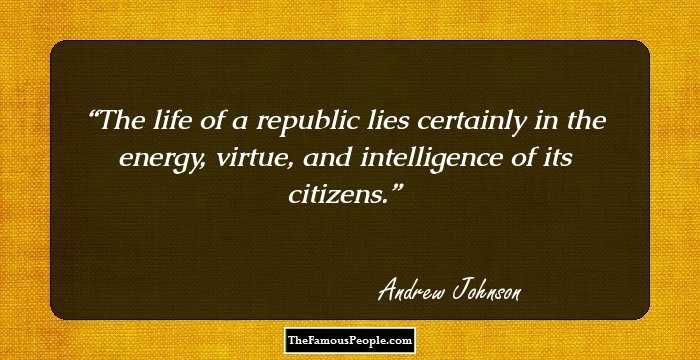 The life of a republic lies certainly in the energy, virtue, and intelligence of its citizens. 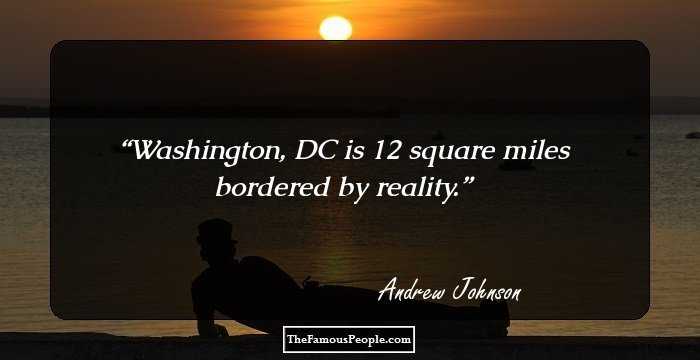 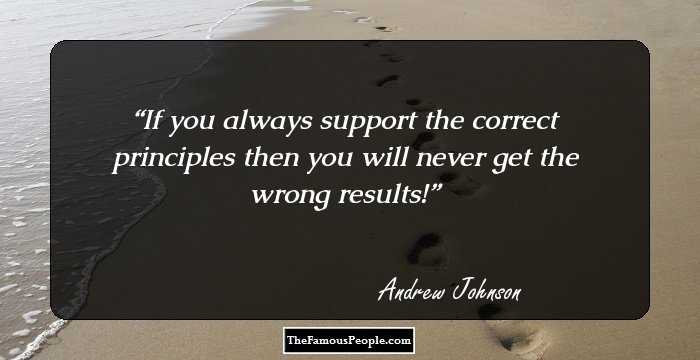 If you always support the correct principles then you will never get the wrong results! 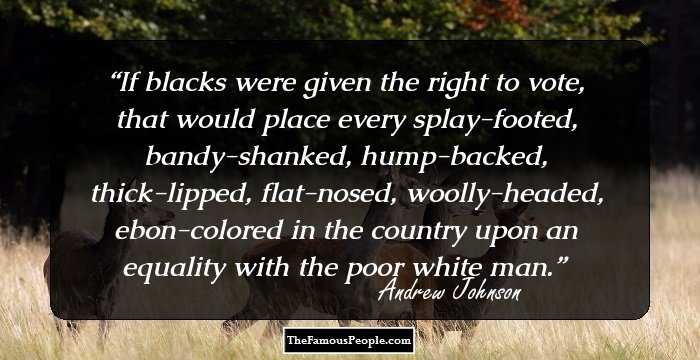 If blacks were given the right to vote, that would place every splay-footed, bandy-shanked, hump-backed, thick-lipped, flat-nosed, woolly-headed, ebon-colored in the country upon an equality with the poor white man. 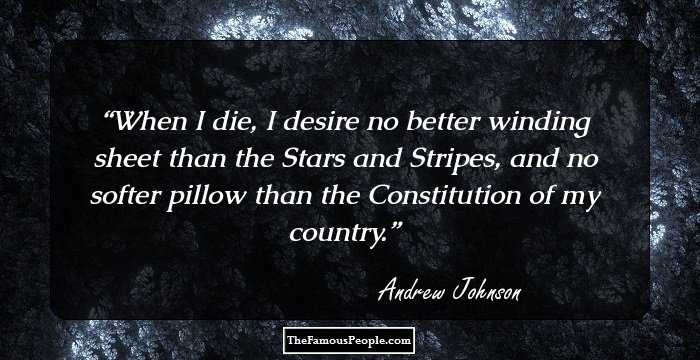 When I die, I desire no better winding sheet than the Stars and Stripes, and no softer pillow than the Constitution of my country.

Outside of the Constitution we have no legal authority more than private citizens, and within it we have only so much as that instrument gives us. This broad principle limits all our functions and applies to all subjects.

I have been almost overwhelmed by the announcement of the sad event [Lincoln's assassination] which has so recently occurred. I feel incompetent to perform duties so important and responsible as those which have been so unexpectedly thrown upon me.

Let us look forward to the time when we can take the flag of our country and nail it below the Cross, and there let it wave as it waved in the olden times, and let us gather around it and inscribed for our motto: 'Liberty and Union, one and inseparable, now and forever,' and exclaim, 'Christ first, our country next!'

There are some who lack confidence in the integrity and capacity of the people to govern themselves. To all who entertain such fears I will most respectfully say that I entertain none . . . If man is not capable, and is not to be trusted with the government of himself, is he to be trusted with the government of others . . . Who, then, will govern? The answer must be, Man for we have no angels in the shape of men, as yet, who are willing to take charge of our political affairs.

The sovereignty of the States is the language of the Confederacy and not the language of the Constitution. The latter contains the emphatic words. This Constitution and the laws of the United States which shall be made in pursuance thereof and all treaties made or which shall be made under the authority of the United States, shall be the supreme law of the land and the judges in every State shall be bound thereby, anything in the constitution or laws of any State to the contrary notwithstanding

If you could extend the elective franchise to all persons of color who can read the Constitution of the United States in English and write their names and to all persons of color who own real estate valued at not less than two hundred and fifty dollars and pay taxes thereon, and would completely disarm the adversary. This you can do with perfect safety. And as a consequence, the radicals, who are wild upon negro franchise, will be completely foiled in their attempts to keep the Southern States from renewing their relations to the Union.

The homestead policy was established only after long and earnest resistance; experience proves its wisdom. The lands in the hands of industrious settlers, whose labor creates wealth and contributes to the public resources, are worth more to the United States than if they had been reserved as a solitude for future purchasers.