Famous As: Former United States Secretary of State
Born On: February 25, 1888
Died On: May 24, 1959
Born In: Washington, D.C., U.S.
Died At Age: 71
John Foster Dulles was a renowned American diplomat, who played a significant role in the early Cold War era by upholding a hostile stance against communism across the globe. He was a Republican who served as the âUnited States Secretary of Stateâ from 1953 to 1959, under President Dwight D. Eisenhower. He graduated from George Washington University Law School and joined Sullivan & Cromwell, the New York City law firm. Dulles also held the position of the chief foreign policy adviser and, in 1944 and 1948, he stood as the Republican presidential nominee. Here is a list of notable, popular, inspiring and interesting quotes and sayings by John Foster Dulles, which have been corralled from his speeches, public utterances, thoughts, interviews, works, and life. Let us browse through the words of wisdom by John Foster Dulles in form of quotes and thoughts which are quoted extensively.
Listed In:
Quotes by Famous People
Leaders
Lawyers & Judges 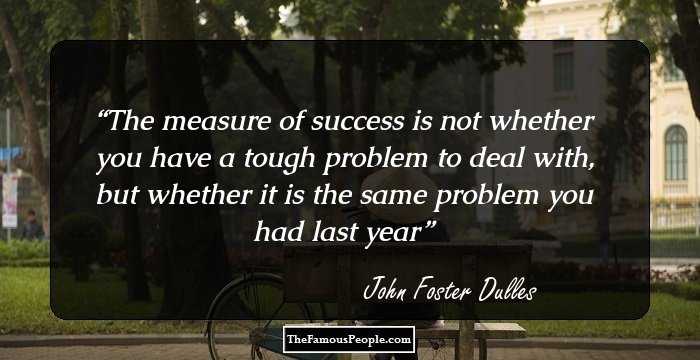 The measure of success is not whether you have a tough problem to deal with, but whether it is the same problem you had last year 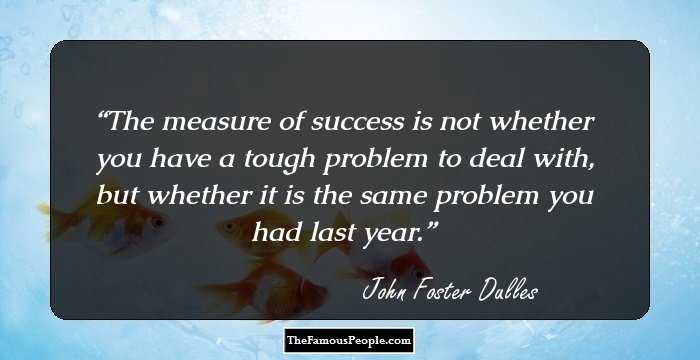 The measure of success is not whether you have a tough problem to deal with, but whether it is the same problem you had last year. 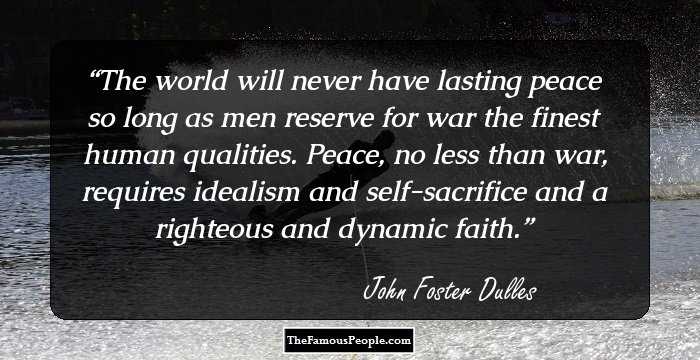 The world will never have lasting peace so long as men reserve for war the finest human qualities. Peace, no less than war, requires idealism and self-sacrifice and a righteous and dynamic faith. 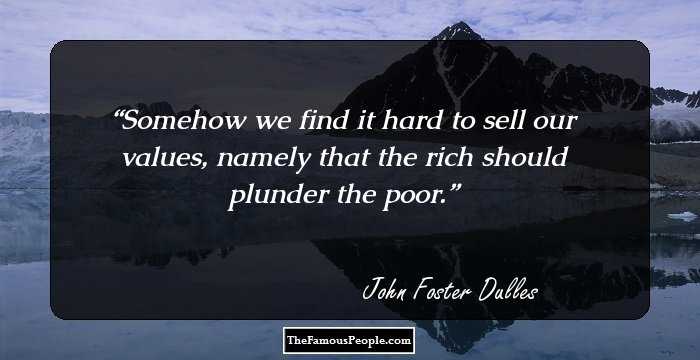 Somehow we find it hard to sell our values, namely that the rich should plunder the poor.

In order to bring a nation to support the burdens of maintaining great military establishments, it is necessary to create an emotional state akin to war psychology. There must be the portrayal of an external menace. This involves the development to a high degree of the nation-hero, nation-villain ideology and the arousing of the population to a sense of sacrifice. Once these exist, we have gone a long way on the path to war.

I hope the day will never come when the American nation will be the champion of the status quo. Once that happens, we shall have forfeited, and rightly forfeited, the support of the unsatisfied, of those who are the victims of inevitable imperfections, of those who, young in years or spirit, believe that they can make a better world and of those who dream dreams and want to make their dreams to come true. 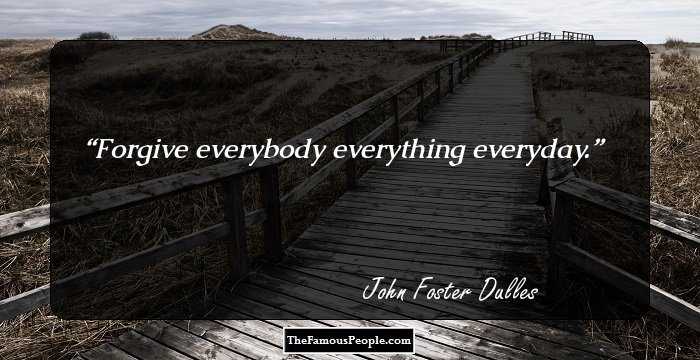 Forgive everybody everything everyday. 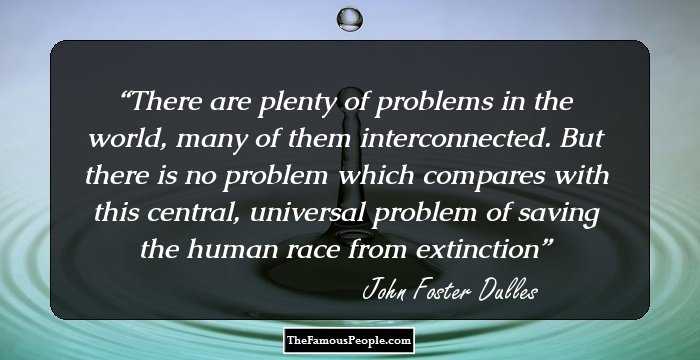 There are plenty of problems in the world, many of them interconnected. But there is no problem which compares with this central, universal problem of saving the human race from extinction 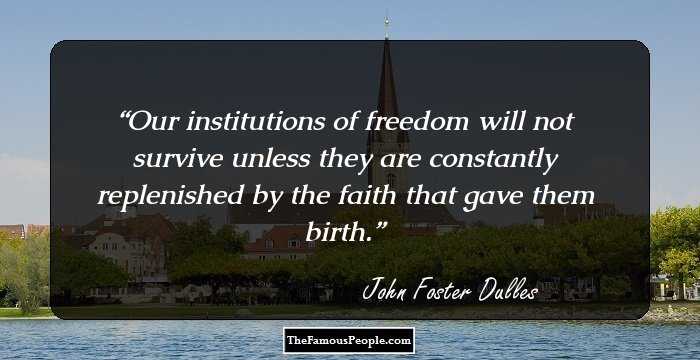 Our institutions of freedom will not survive unless they are constantly replenished by the faith that gave them birth.

Peace will never be won if men reserve for war their greatest efforts, Peace, too, requires well-directed and sustained sacrificial endeavor. Given that, we can, I believe, achieve the great goal of our foreign policy, that of enabling our people to enjoy in peace the blessings of liberty.

The United Nations represents not a final stage in the development of world order, but only a primitive stage. Therefore its primary task is to create the conditions which will make possible a more highly developed organization. 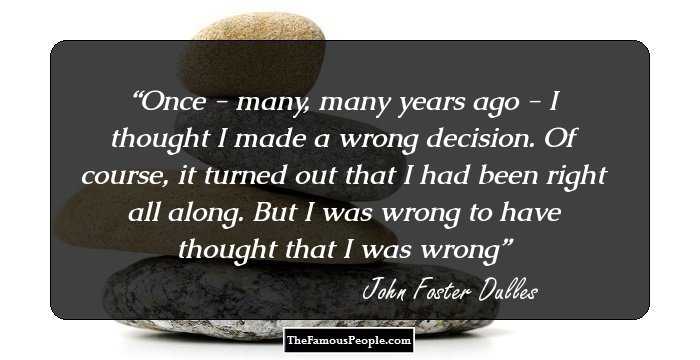 Once - many, many years ago - I thought I made a wrong decision. Of course, it turned out that I had been right all along. But I was wrong to have thought that I was wrong 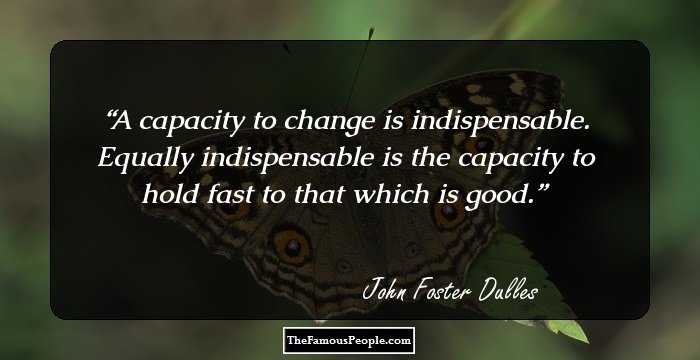 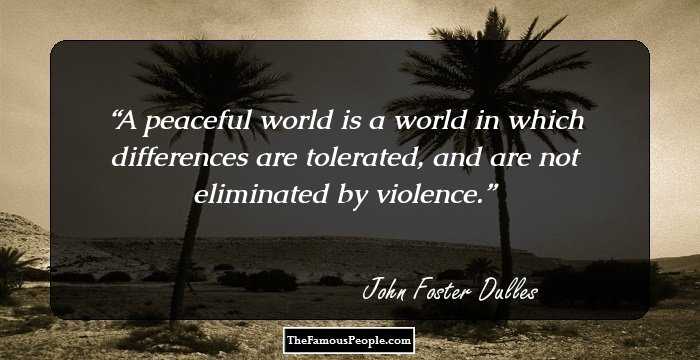 A peaceful world is a world in which differences are tolerated, and are not eliminated by violence. 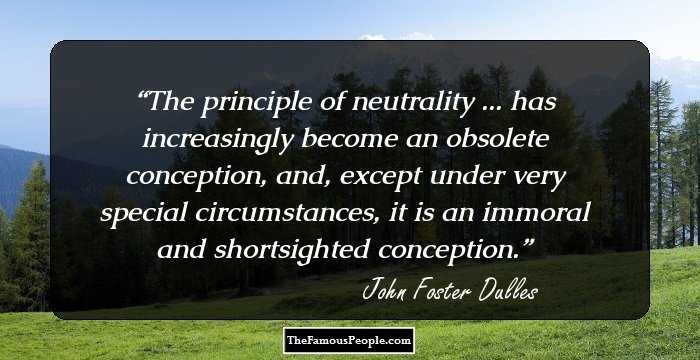 The principle of neutrality ... has increasingly become an obsolete conception, and, except under very special circumstances, it is an immoral and shortsighted conception. 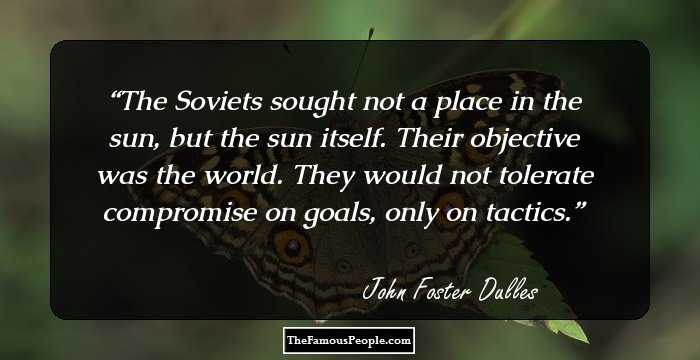 The Soviets sought not a place in the sun, but the sun itself. Their objective was the world. They would not tolerate compromise on goals, only on tactics. 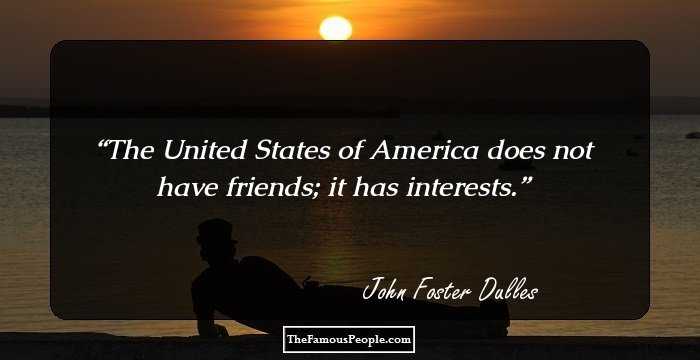 The United States of America does not have friends; it has interests.

Local defense will always be important. But there is no local defense which alone will contain the mighty land power of the Communist world. Local defense must be reinforced by the further deterrent of massive retaliatory power.

Mankind will never win lasting peace so long as men use their full resources only in tasks of war. While we are yet at peace, let us mobilize the potentialities, particularly the moral and spiritual potentialities, which we usually reserve for war. 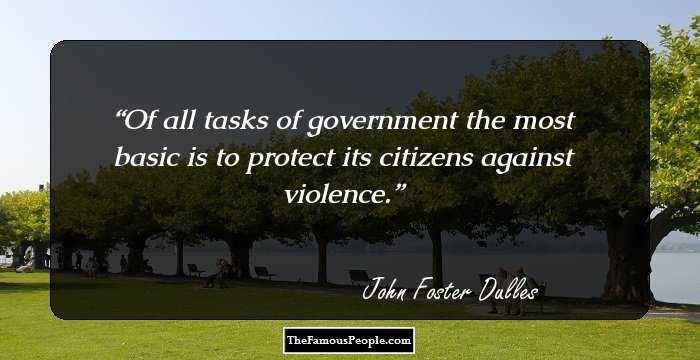 Of all tasks of government the most basic is to protect its citizens against violence. 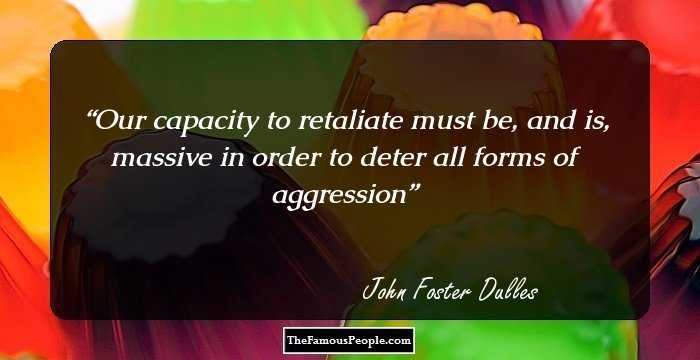 Our capacity to retaliate must be, and is, massive in order to deter all forms of aggression 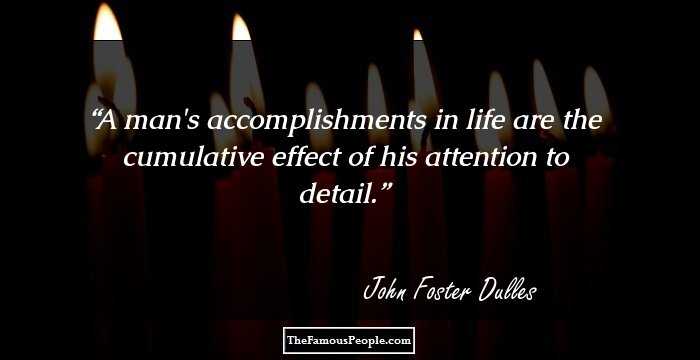 A man's accomplishments in life are the cumulative effect of his attention to detail. 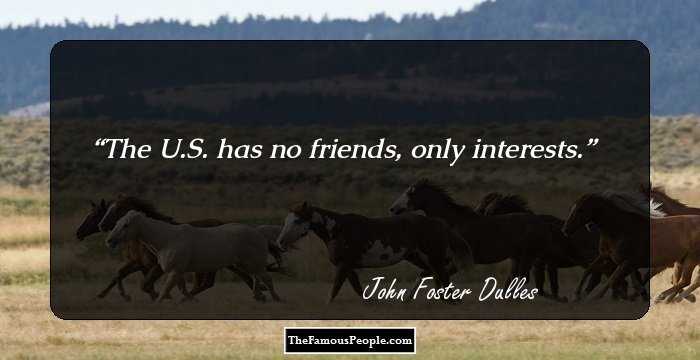 The U.S. has no friends, only interests. 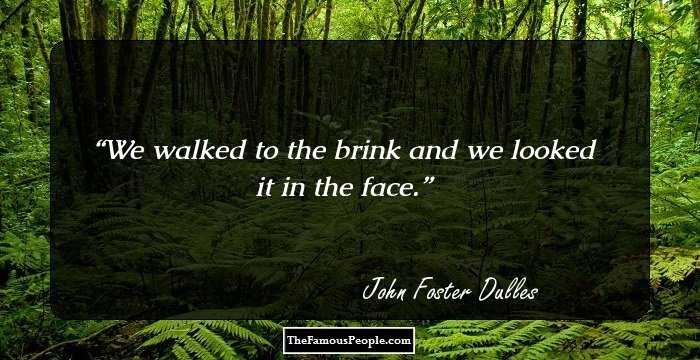 We walked to the brink and we looked it in the face. 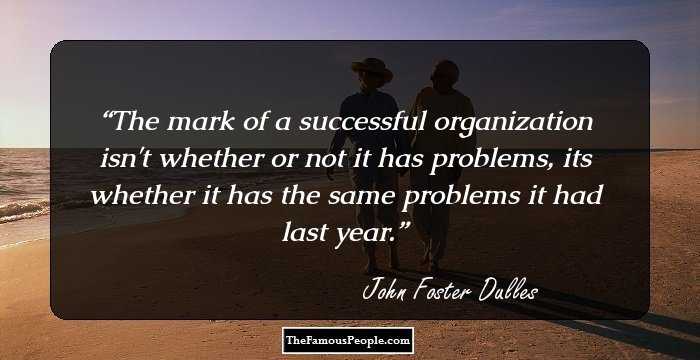 The mark of a successful organization isn't whether or not it has problems, its whether it has the same problems it had last year. 100 Famous Quotes by Hellen Keller, The Author of The Story of My Life