Famous As: Humorist, Writer and Politician
Born On: September 24, 1890
Died On: November 11, 1971
Born In: Ashtead, Surrey, England
Died At Age: 81
A.P. Herbert was a distinguished English novelist, humorist, law reform activist and playwright. His first book âThe Secret Battleâ was released following the World War I. In 1924, he was called by the editor of the 'Punch', Owen Seaman, to join their staff, which Herbert cheerfully acknowledged. Herbert was elected as an independent MP for Oxford University in 1935, with the assistance of his companion Frank Pakenham. During his time at the Parliament, he drafted a few bills including the âMatrimonial Causes Billâ, âPublic Refreshment Billâ and âBookmakers Billâ. During the same time he published his book âUncommon Lawâ which is considered as one of his best works till date. It was first distributed in the "Punch" under the title âMisleading Casesâ. Read through the inspiring quotes and thoughts by A.P. Herbert which have been extracted from his writings, books, plays, speeches, work and life. Presenting famous quotations and sayings by A.P. Herbert that will give you a glimpse of his work and life.
Listed In:
Writers
Leaders 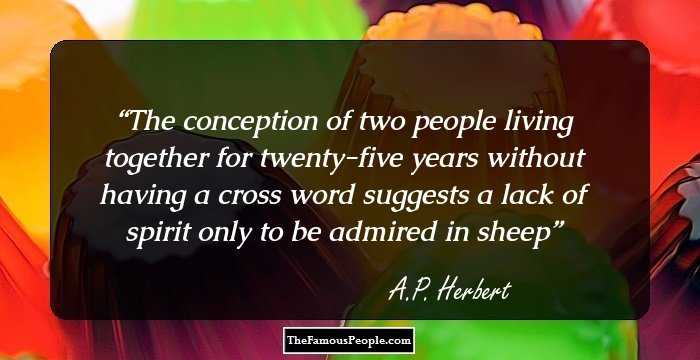 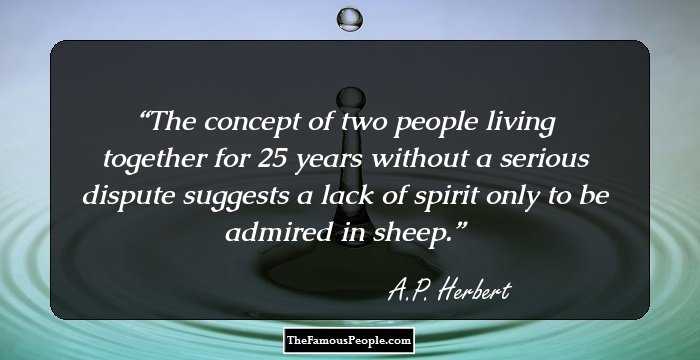 The concept of two people living together for 25 years without a serious dispute suggests a lack of spirit only to be admired in sheep. 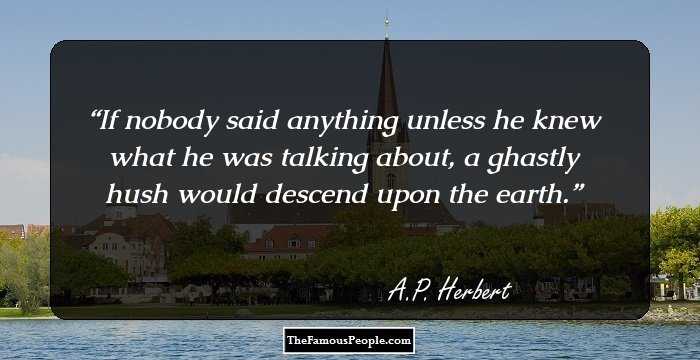 If nobody said anything unless he knew what he was talking about, a ghastly hush would descend upon the earth. 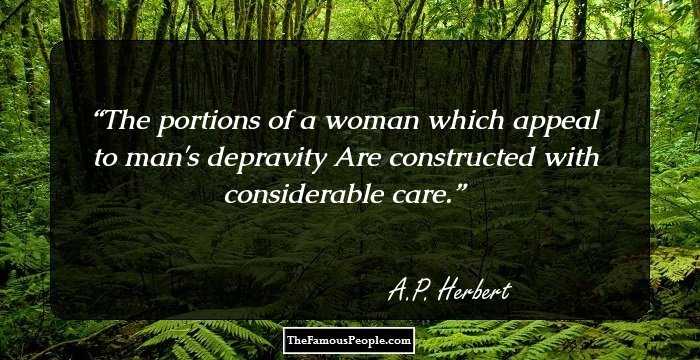 The portions of a woman which appeal to man's depravity Are constructed with considerable care. 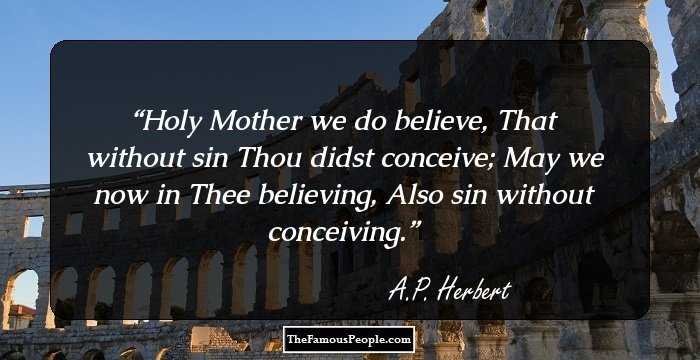 Holy Mother we do believe, That without sin Thou didst conceive; May we now in Thee believing, Also sin without conceiving.

Elderly gentlemen, gentle in all respects, kind to animals, beloved by children, and fond of music, are found in lonely corners of the downs, hacking at sandpits or tussocks of grass, and muttering in a blind, ungovernable fury elaborate maledictions which could not be extracted from them by robbery or murder. Men who would face torture without a word become blasphemous at the short fourteenth. It is clear that the game of golf may well be included in that category of intolerable provocations which may legally excuse or mitigate behavior not otherwise excusable. 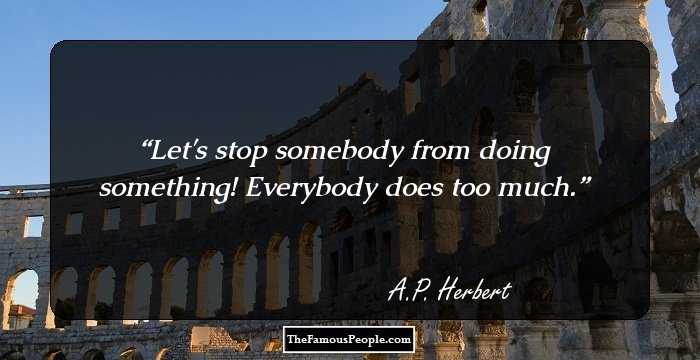 Let's stop somebody from doing something! Everybody does too much. 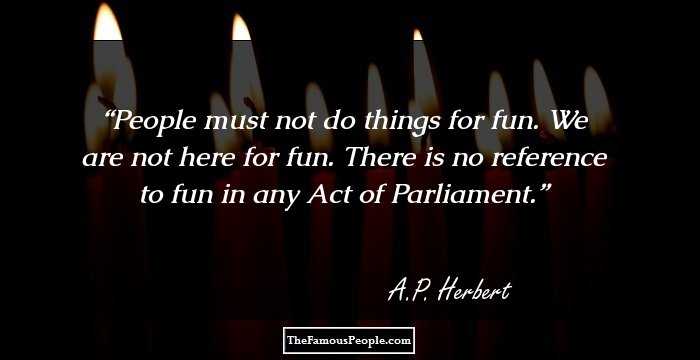 People must not do things for fun. We are not here for fun. There is no reference to fun in any Act of Parliament. 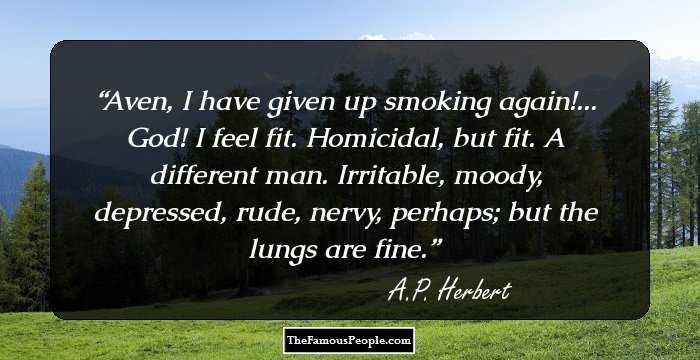 Aven, I have given up smoking again!... God! I feel fit. Homicidal, but fit. A different man. Irritable, moody, depressed, rude, nervy, perhaps; but the lungs are fine. 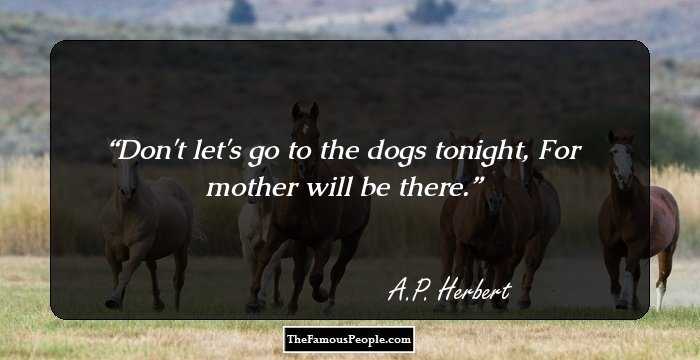 Don't let's go to the dogs tonight, For mother will be there. 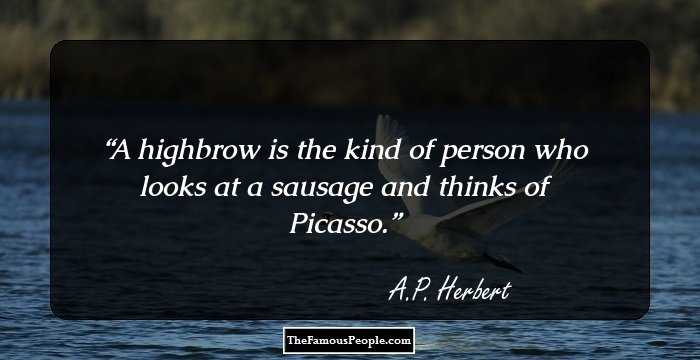 A highbrow is the kind of person who looks at a sausage and thinks of Picasso.

Citizens who take it upon themselves to do unusual actions which attract the attention of the police should be careful to bring these actions into one of the recognized categories of crimes and offences, for it is intolerable that the police should be put to the pains of inventing reasons for finding them undesirable.

There is no reason why a joke should not be appreciated more than once. Imagine how little good music there would be if, for example, a conductor refused to play Beethoven's Fifth Symphony on the ground that his audience might have heard it before.

A man who has made up his mind on a given subject twenty-five years ago and continues to hold his political opinions after he has been proved to be wrong is a man of principle; while he who from time to time adapts his opinions to the changing circumstances of life is an opportunist. 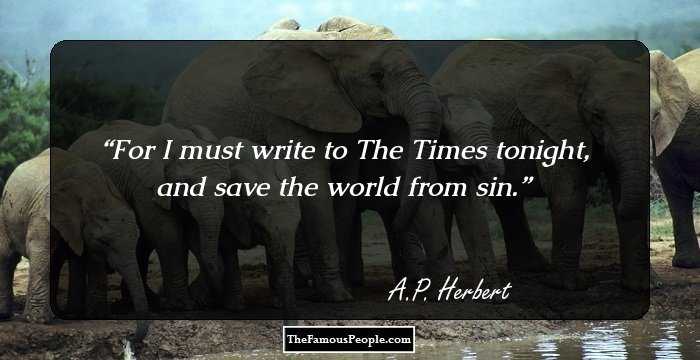 For I must write to The Times tonight, and save the world from sin. 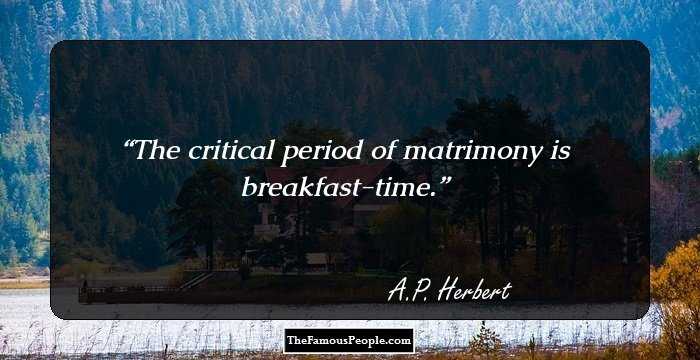 The critical period of matrimony is breakfast-time. 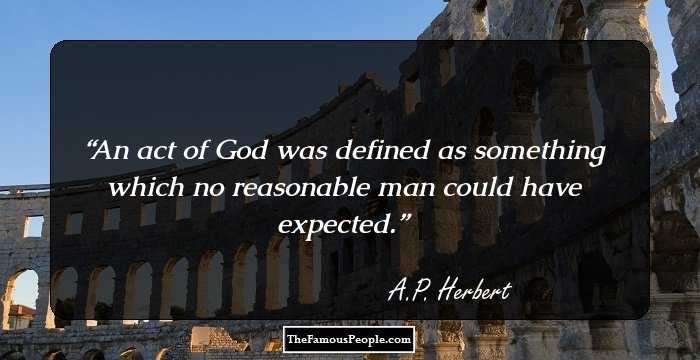 An act of God was defined as something which no reasonable man could have expected. 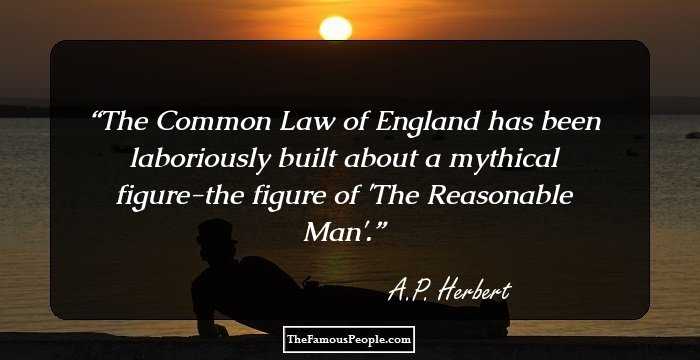 The Common Law of England has been laboriously built about a mythical figure-the figure of 'The Reasonable Man'. 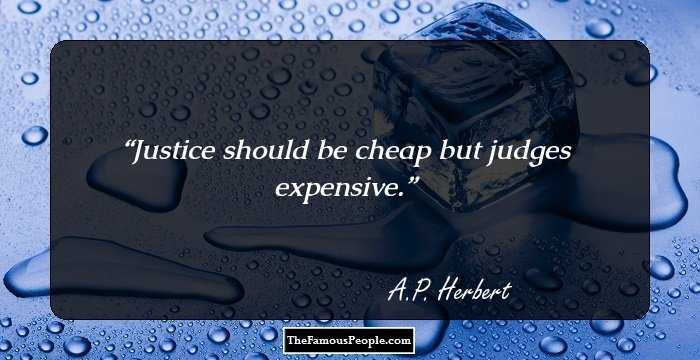 Justice should be cheap but judges expensive. 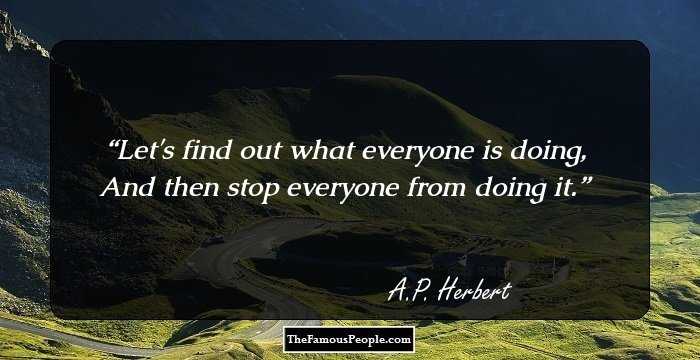 Let's find out what everyone is doing, And then stop everyone from doing it. 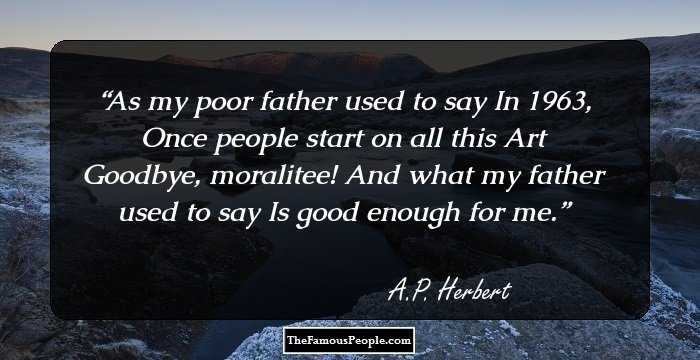 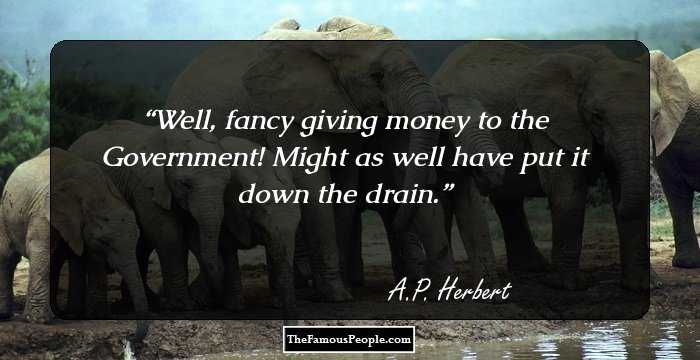 Well, fancy giving money to the Government! Might as well have put it down the drain. 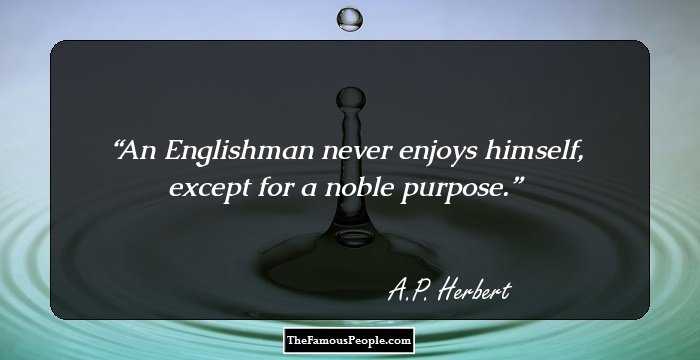 An Englishman never enjoys himself, except for a noble purpose. 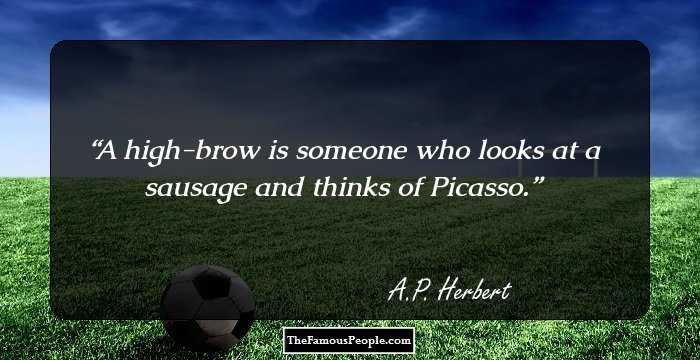 A high-brow is someone who looks at a sausage and thinks of Picasso.

My ball is in a bunch of fern, A jolly place to be; An angry man is close astern- He waves his club at me. Well, let him wave-the sky is blue; Go on, old ball, we are but two-We may be down in three, Or nine-or ten-or twenty-five-It matters not; to be alive, Is good enough for me.

The rain is plentious but, by God's decree, Only a third is meant for you and me; Two-thirds are taken by the growing things Or vanish Heavenward on vapour's wings: Nor does it mathematically fall With social equity on one and all. The population's habit is to grow In every region where the water's low: Nature is blamed for failings that are Man's, And well-run rivers have to change their plans.

Men who would face torture without a word become blasphemous at the short fourteenth. It is clear that the game of golf may well be included in that category of intolerable provocations which may legally excuse or mitigate behaviour not otherwise excusable.