Famous As: Former Secretary of State for Health and Social Care of the United Kingdom
Born On: June 16, 1912
Died On: February 8, 1998
Born In: Birmingham
Died At Age: 85
John Enoch Powell, also known as Enoch Powell, was a British politician, philologist, scholar, and poet. He served as a Member of Parliament, first as a member of the Conservative Party (1950â74), and second time as a member of the Ulster Unionist Party (1974â87). He also served as Minister of Health during 1960â63. Before moving to politics, he was a scholar and worked as a professor of Ancient Greek at the age of 25. During the World War II, Powell served in various positions, including staff and intelligence, and reached the rank of brigadier while he was still in his early thirties. He was also a poet and wrote several books on classical and political subjects. He became a national figure after his April 1968 "Rivers of Blood" speech. He criticised mass immigration into the UK. During his political life, he shared his views on several topics through speeches, writings, books, interviews, etc. We have curated some of his famous quotes from his work and speeches.
Listed In:
Intellectuals & Academics
Leaders 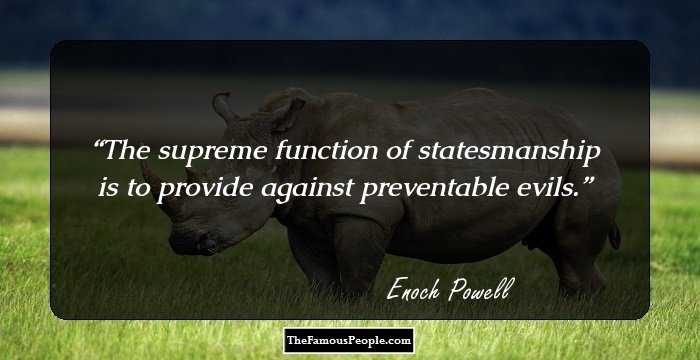 The supreme function of statesmanship is to provide against preventable evils.

We must be mad, literally mad, as a nation to be permitting the annual inflow of some 50,000 dependents, who are for the most part the material of the future growth of the immigrant-descended population. It is like watching a nation busily engaged in heaping up its own funeral pyre. 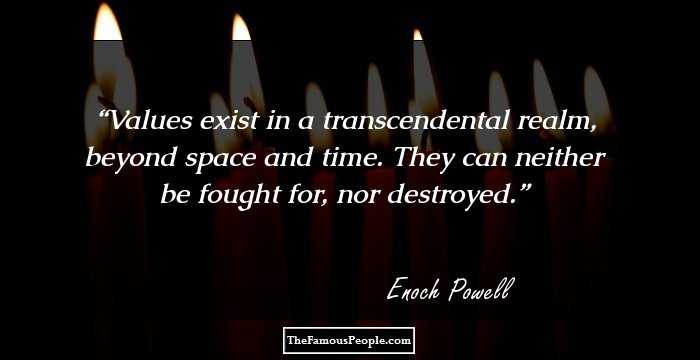 Values exist in a transcendental realm, beyond space and time. They can neither be fought for, nor destroyed. 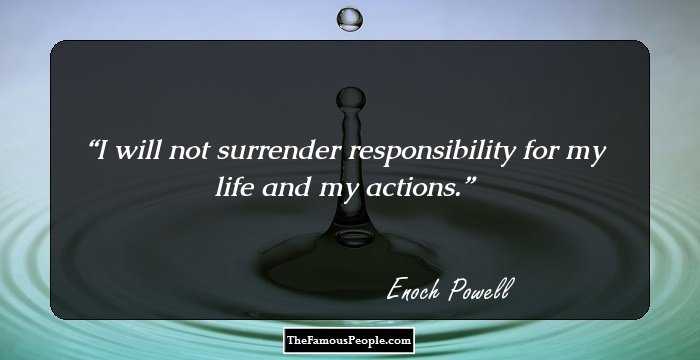 I will not surrender responsibility for my life and my actions. 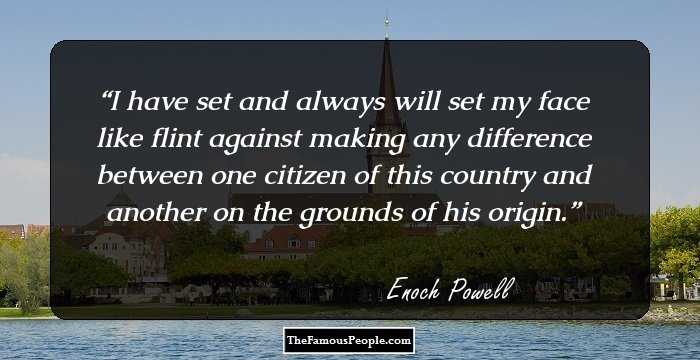 I have set and always will set my face like flint against making any difference between one citizen of this country and another on the grounds of his origin. 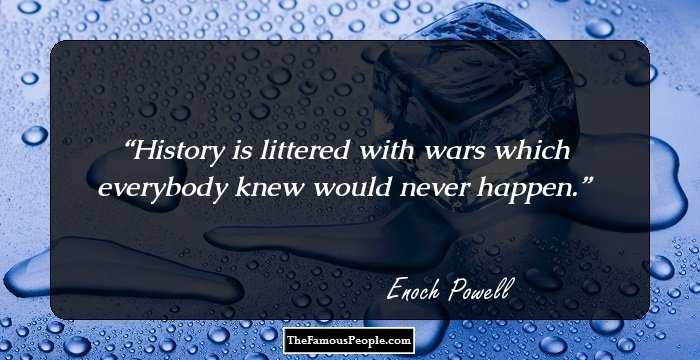 History is littered with wars which everybody knew would never happen. 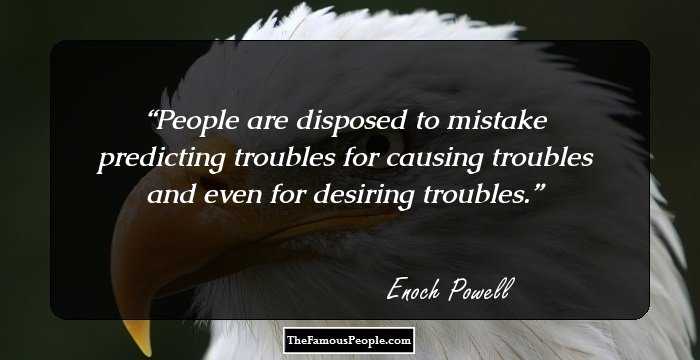 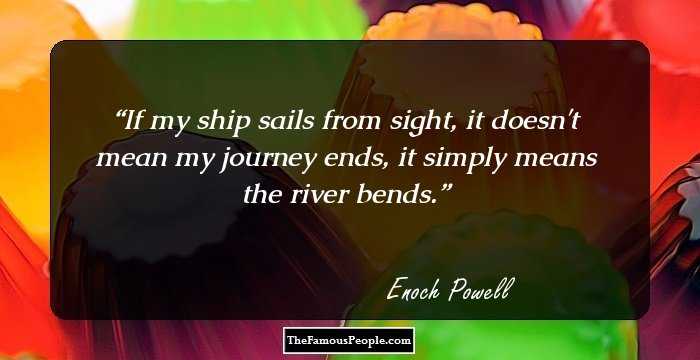 If my ship sails from sight, it doesn't mean my journey ends, it simply means the river bends. 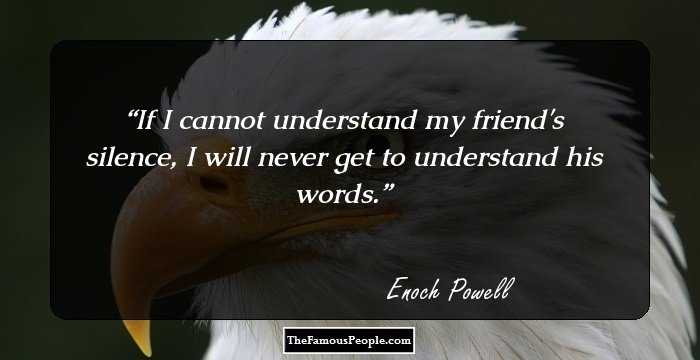 If I cannot understand my friend's silence, I will never get to understand his words. 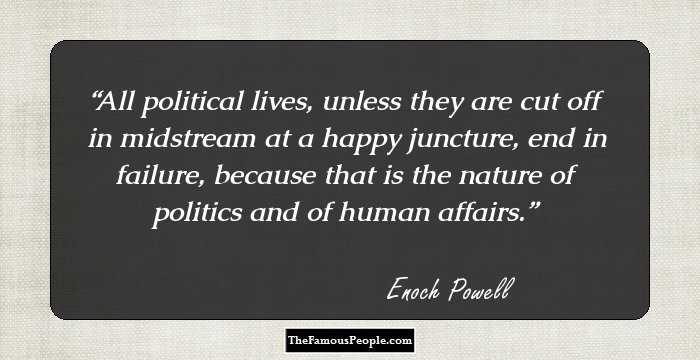 All political lives, unless they are cut off in midstream at a happy juncture, end in failure, because that is the nature of politics and of human affairs. 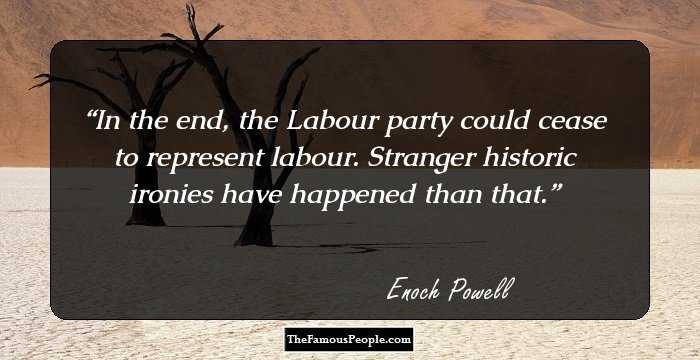 In the end, the Labour party could cease to represent labour. Stranger historic ironies have happened than that.

Yet we slink about like whipped curs:;... our self-abasement principally takes the form of subservience to the United States:;... we are under no necessity to participate in the American nightmare of a Soviet monster barely held at bay in all quarters of the globe by an inconceivable nuclear armament and by political intervention everywhere from Poland to Cambodia. It is the Americans who need us in order to act out their crazy scenario... We simply do not need to go chasing up and down after the vagaries of the next ignoramus to become President of the United States. 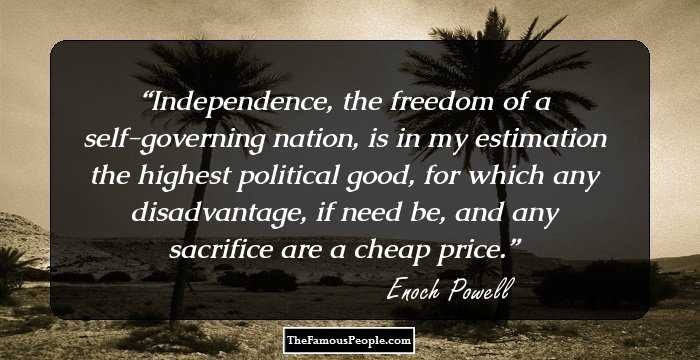 Independence, the freedom of a self-governing nation, is in my estimation the highest political good, for which any disadvantage, if need be, and any sacrifice are a cheap price. 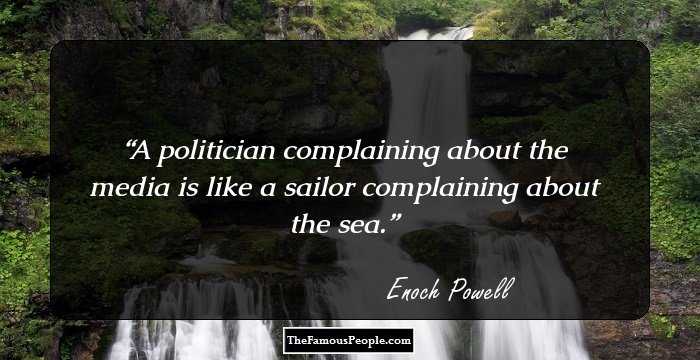 It is one of history's most mocking ironies that the German customs union, which set out to dominate Europe and conquer Britain in the form of Bismarckian or Hitlerian military force, has at last vanquished the victor by drawing Britain into a Zollverein which comprises Western Europe and aspires to comprise the Mediterranean as well. If the ghosts of the Hohenzollerns come back to haunt this planet, they must find a lot to laugh at.

Virtually the entire inflow was therefore Asiatic, and all but three or four thousand of that inflow originated from the Indian subcontinent... It is by 'black Power' that the headlines are caught, and under the shape of the negro that the consequences for Britain of immigration and what is miscalled 'race' are popularly depicted. Yet it is more truly when he looks into the eyes of Asia that the Englishman comes face to face with those who will dispute with him the possession of his native land.

It is like watching a nation busily engaged in heaping up its own funeral pyre. So insane are we that we actually permit unmarried persons to immigrate for the purpose of founding a family with spouses and fiancÃ©es whom they have never seen.

Lift the curtain and 'the State' reveals itself as a little group of fallible men in Whitehall, making guesses about the future, influenced by political prejudices and partisan prejudices, and working on projections drawn from the past by a staff of economists.

I refer to the misunderstanding of Soviet Russia as an aggressive power, militaristically and ideologically bent upon world domination 'seeing', to quote a recent speech of the British Prime Minister, 'the rest of the world as its rightful fiefdom.' How any rational person, viewing objectively the history of the last thirty-five years, could entertain this 'international misunderstanding' challenges, if it does not defeat, comprehension. The notion has no basis in fact... If Russia is bent on world conquest, she has been remarkably slothful and remarkably unsuccessful. 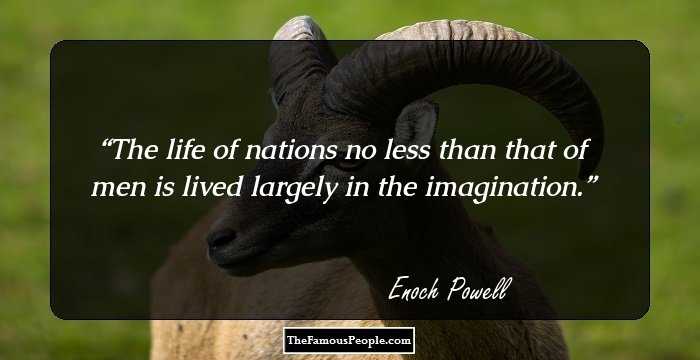 The life of nations no less than that of men is lived largely in the imagination.

It is advertising that enthrones the customer as king. This infuriates the socialist...[it is] the crossing of the boundary between West Berlin and East Berlin. It is Checkpoint Charlie, or rather Checkpoint Douglas, the transition from the world of choice and freedom to the world of drab, standard uniformity.