Sam Shepard was an eminent American playwright, screenwriter, actor, director and author. His career spanned over five decades and he won 10 âObie Awardsâ for directing and writing. He wrote over fifty-five plays and also a number of books of essays, memoirs and short stories. In 1979, he earned a âPulitzer Prize for Drama.â He earned an âAcademy Awardâ nomination for his supporting role in âThe Right Stuff.â In 2009, as a master American dramatist, he earned the âPEN/Laura Pels Theatre Award.â Have a look at some interesting quotes by Sam Shepard which has been curated from his writings, dialogues, movies, memoirs, plays, essays and short stories. Go through these Sam Shepard quotes on inspiration, character, acting, love, belief, plays, ideas, nostalgia, destiny, culture, knowledge, heritage, alcohol, evil, tragedy, etc. 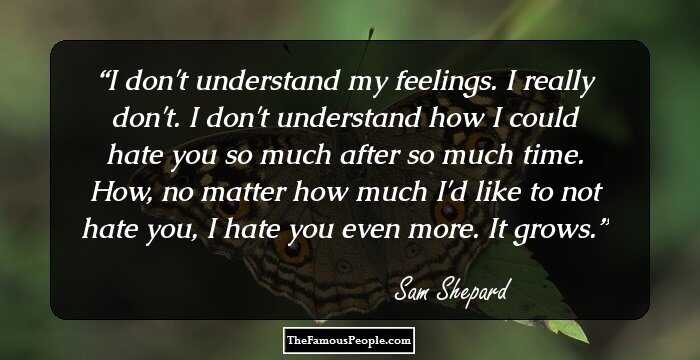 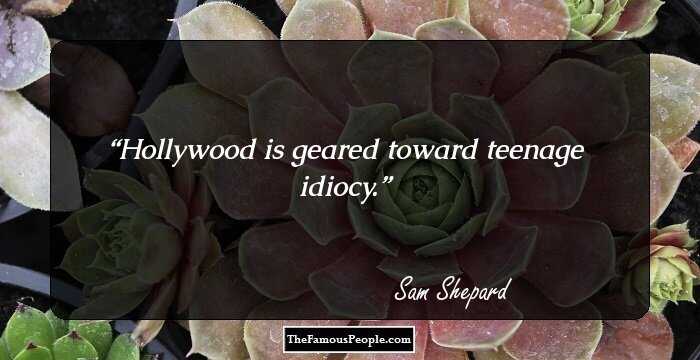 Hollywood is geared toward teenage idiocy. 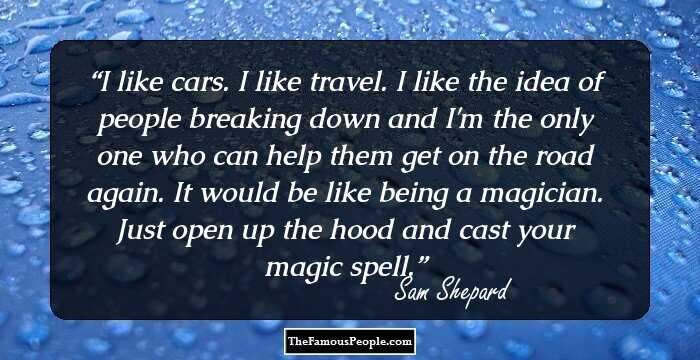 I like cars. I like travel. I like the idea of people breaking down and I'm the only one who can help them get on the road again. It would be like being a magician. Just open up the hood and cast your magic spell. 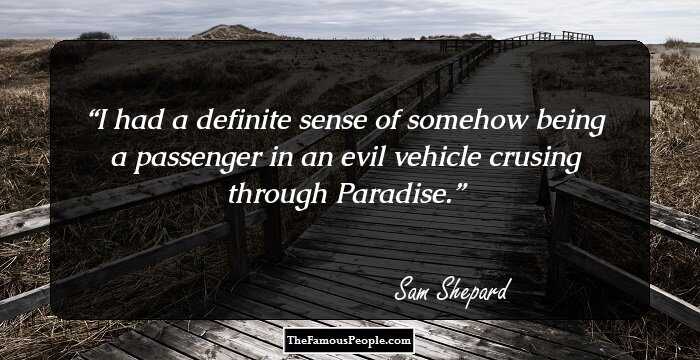 I had a definite sense of somehow being a passenger in an evil vehicle crusing through Paradise. 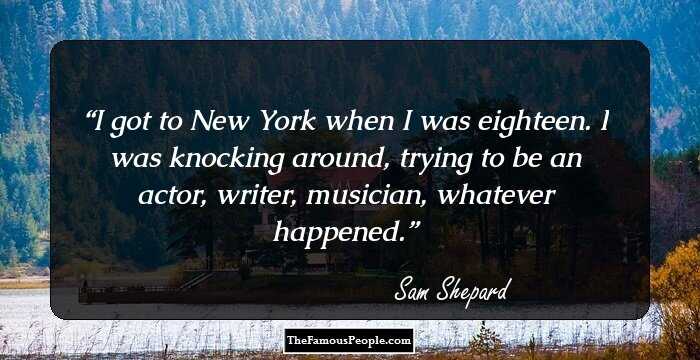 I got to New York when I was eighteen. I was knocking around, trying to be an actor, writer, musician, whatever happened. 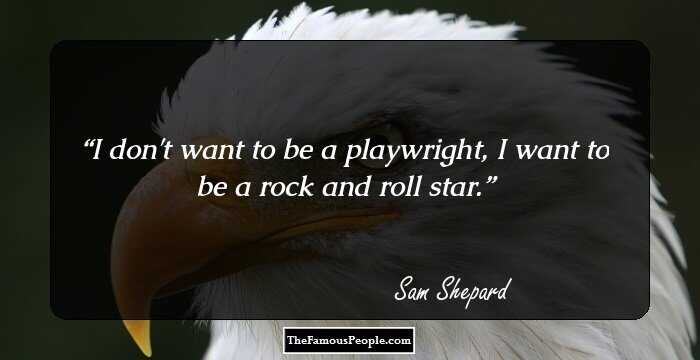 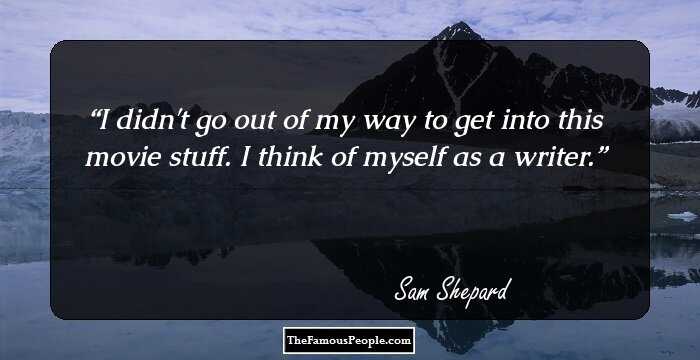 I didn't go out of my way to get into this movie stuff. I think of myself as a writer. 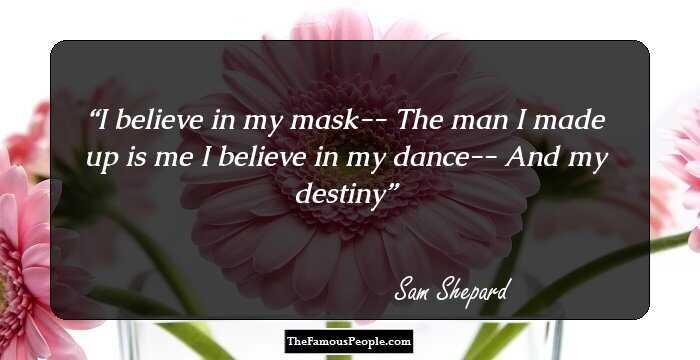 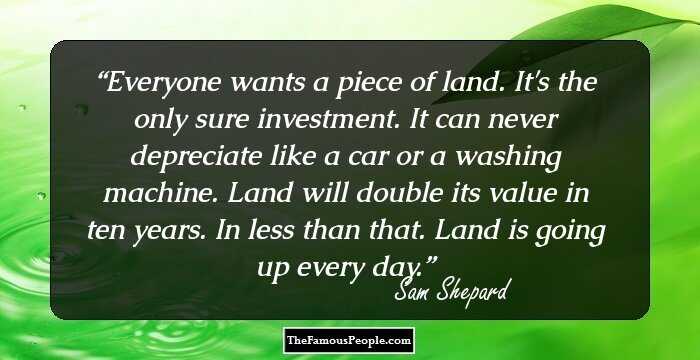 Everyone wants a piece of land. It's the only sure investment. It can never depreciate like a car or a washing machine. Land will double its value in ten years. In less than that. Land is going up every day. 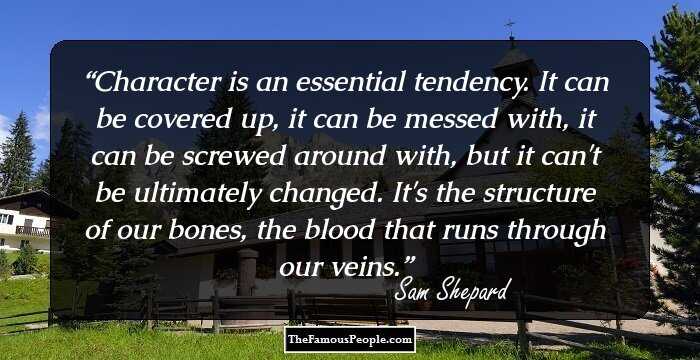 Character is an essential tendency. It can be covered up, it can be messed with, it can be screwed around with, but it can't be ultimately changed. It's the structure of our bones, the blood that runs through our veins. 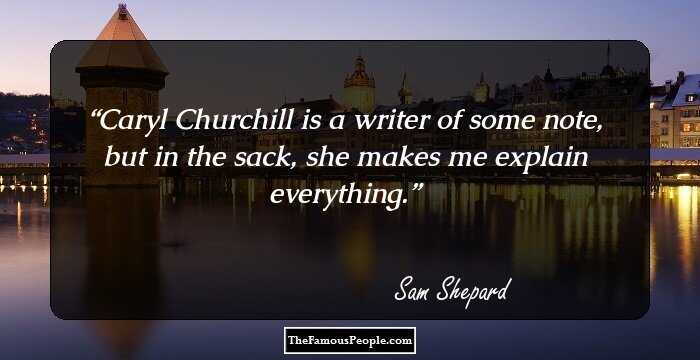 Caryl Churchill is a writer of some note, but in the sack, she makes me explain everything. 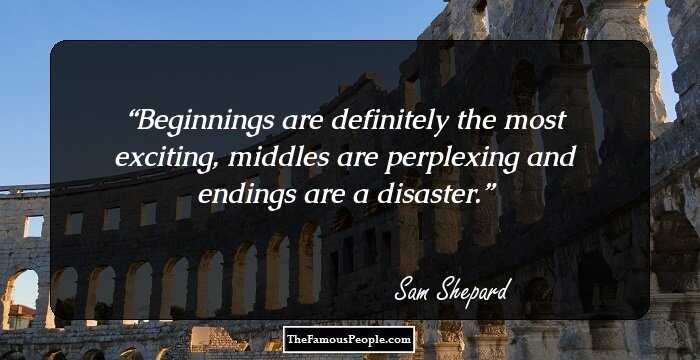 Beginnings are definitely the most exciting, middles are perplexing and endings are a disaster.

After the falling out with my father, I worked on a couple of ranches - thoroughbred layup farms, actually - out toward Chino, California. That was fine for a little while, but I wanted to get out completely, and twenty miles away wasnt far enough.

All that stuff about my father and my childhood is interesting up to a certain point, but I kind of capsized with the family drama a long time ago. Now I want to get away from that. Not that I won't return to it, but a certain element has been exhausted, and it feels like why regurgitate all this stuff?

Being a writer is so great because you're literally not dependent on anybody. Whereas, as an actor, you have to audition or wait for somebody else to make a decision about how to use you, with writing, you can do it anywhere, anytime you want. You don't have to ask permission.

Democracy's a very fragile thing. You have to take care of democracy. As soon as you stop being responsible to it and allow it to turn into scare tactics, it's no longer democracy, is it? It's something else. It may be an inch away from totalitarianism.

Farm country -- you know, hay, horses, cattle. It's the ideal situation for me. I like the physical endeavors that go with the farm -- cutting hay, cleaning out stalls, or building a barn. You go do that and then come back to the writing.

Film acting is really the trick of doing moments. You rarely do a take that lasts more than 20 seconds. You really earn your spurs acting onstage. I needed to do that for myself. I would hate to say at the end of everything that I never did a stage play.

For me, playwriting is and has always been like making a chair. Your concerns are balance, form, timing, lights, space, music. If you don't have these essentials, you might as well be writing a theoretical essay, not a play.

I don't get offered leading parts. I suppose I've become a kind of character actor or sideman. I think it had to do with probably in the '90s, I refused so many leading roles that they gave up on me, or I just became unpopular, or I became old. All those reasons.

I feel like I've never had a home, you know? I feel related to the country, to this country, and yet I don't know exactly where I fit in... There's always this kind of nostalgia for a place, a place where you can reckon with yourself.

I feel very lucky and privileged to be a writer. I feel lucky in the sense that I can branch out into prose and tell different kinds of stories and stuff. But being a writer is so great because youre literally not dependent on anybody.

I hate endings. Just detest them. Beginnings are definitely the most exciting, middles are perplexing and endings are a disaster. â¦ The temptation towards resolution, towards wrapping up the package, seems to me a terrible trap. Why not be more honest with the moment? The most authentic endings are the ones which are already revolving towards another beginning. Thatâs genius.

I still haven't gotten over this thing of walking down the street and somebody recognizing you because you've been in a movie. There's this illusion that movie stars only exist in the movies. And to see one live is like seeing a leopard let out of the zoo.

100 Woody Allen Quotes That Highlight His Take On Life