Famous As: Known as Father of Rocket Science
Born On: March 23, 1912
Died On: June 16, 1977
Born In: Wyrzysk, Poland
Died At Age: 65
Wernher Von Braun was a renowned German-American scientist popularly known as âFather of Rocket Scienceâ. He started reading books of famous physicist at an early age which are believed to have cultivated his interest in science and mathematics. He joined the âUniversity of Berlinâ to pursue his Bachelorâs Degree and went on to do his research on liquid-fuel rockets. During his initial days, he along with his team, launched a couple of such rockets. This encouraged them to enhance the range and after a few years of research they came up with the V-2 Missile. He further joined the âU.S. Army Ordnance Corpsâ to further work on the altitude and was eventually made the head of âU.S. Army Ordnance Guided Missile Projectâ. As the head, he contributed in making various missiles including âJupiter-Câ and âRedstoneâ before launching the first âAmerican Artificial Satelliteâ called âExplorer Iâ. He further contributed to various important projects but the most notable one was as the chief of âSaturn Vâ which was the first spacecraft to launch humans on the moon. He even wrote a couple of books called âConquest of the Moon-1953â and âSpace Travel-A History-1985â. He was honored with various awards including âWar Merit Crossâ. Here is a compilation of some of the noteworthy quotations and thoughts by the celebrated scientist. Go through the inspiring quotes and thoughts by Wernher Von Braun which have been scanned from his books, writings, life, research and work.
Listed In:
Scientists
Engineers
Inventors 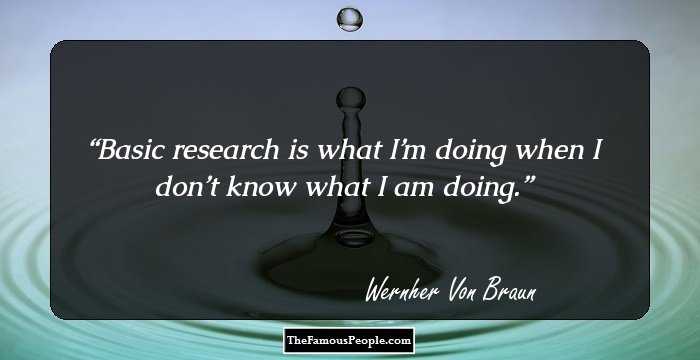 Basic research is what I’m doing when I don’t know what I am doing. 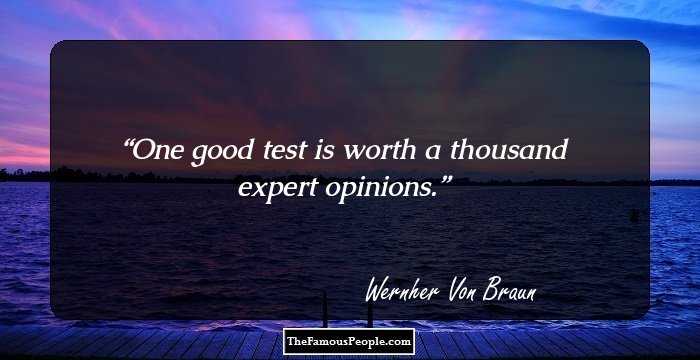 One good test is worth a thousand expert opinions. 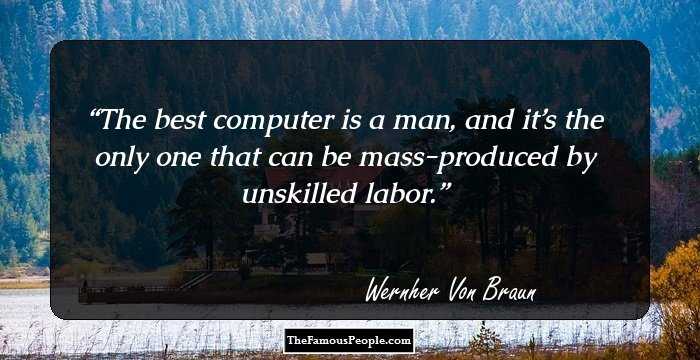 The best computer is a man, and it’s the only one that can be mass-produced by unskilled labor. 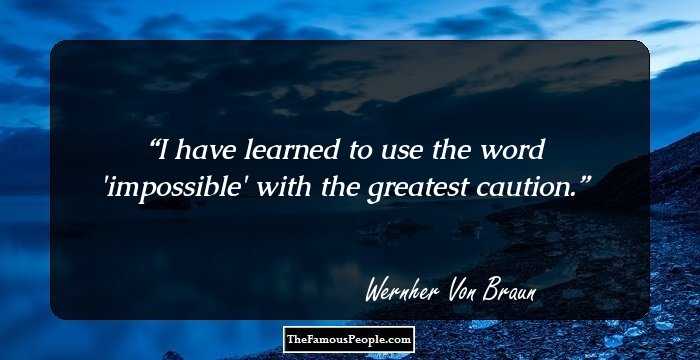 I have learned to use the word 'impossible' with the greatest caution. 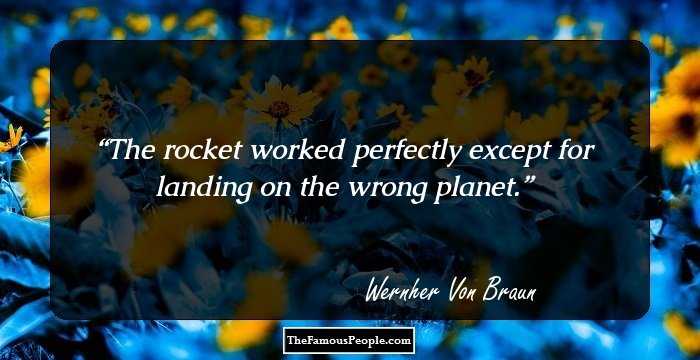 The rocket worked perfectly except for landing on the wrong planet. 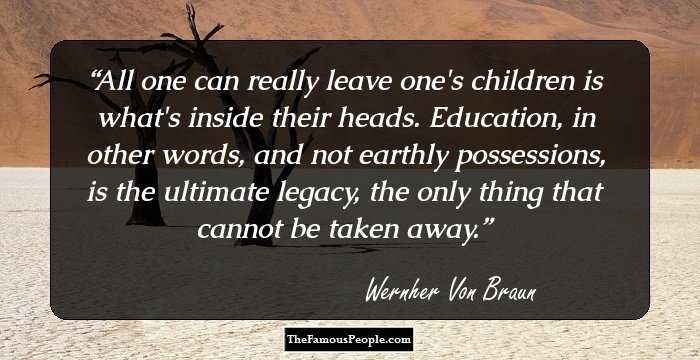 All one can really leave one's children is what's inside their heads. Education, in other words, and not earthly possessions, is the ultimate legacy, the only thing that cannot be taken away. 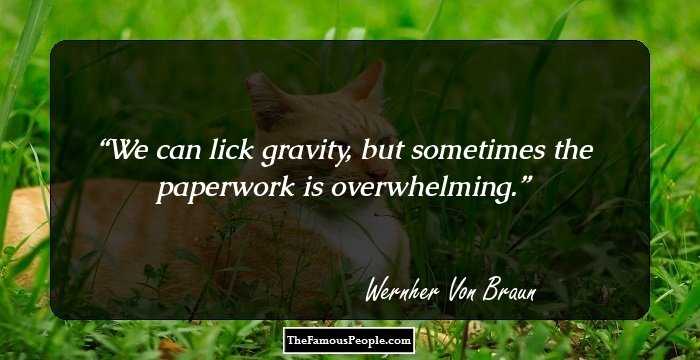 We can lick gravity, but sometimes the paperwork is overwhelming. 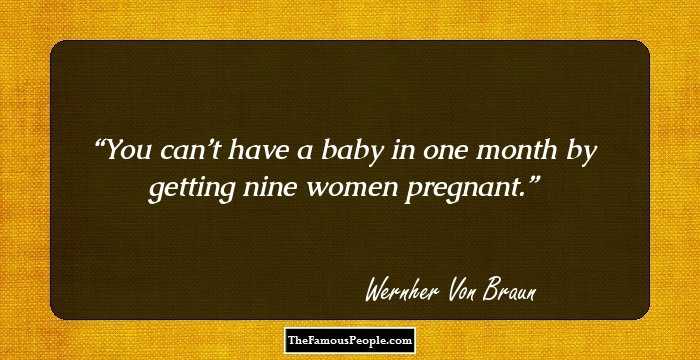 You can’t have a baby in one month by getting nine women pregnant. 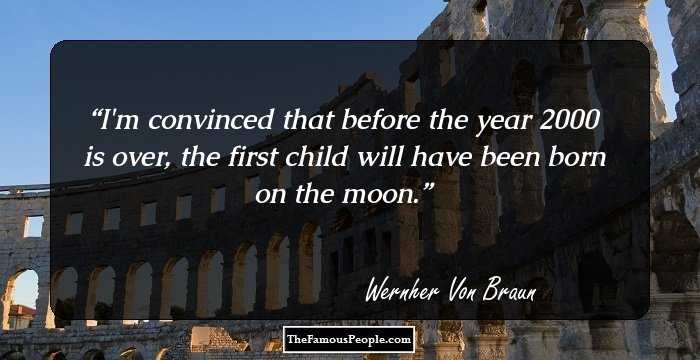 I'm convinced that before the year 2000 is over, the first child will have been born on the moon. 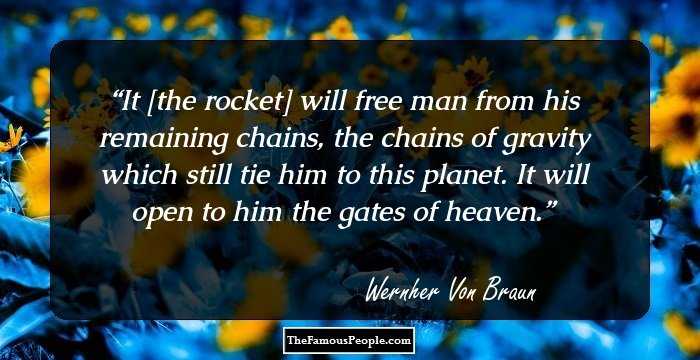 It [the rocket] will free man from his remaining chains, the chains of gravity which still tie him to this planet. It will open to him the gates of heaven. 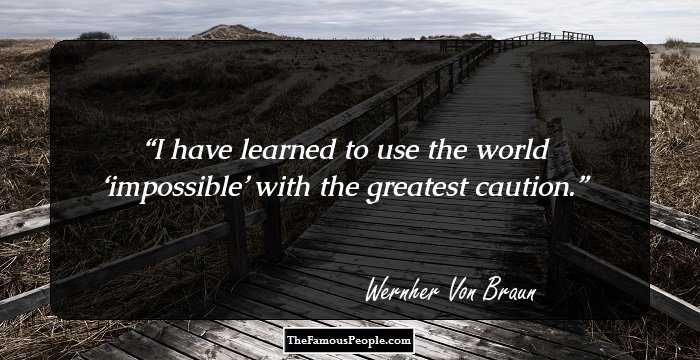 I have learned to use the world ‘impossible’ with the greatest caution. 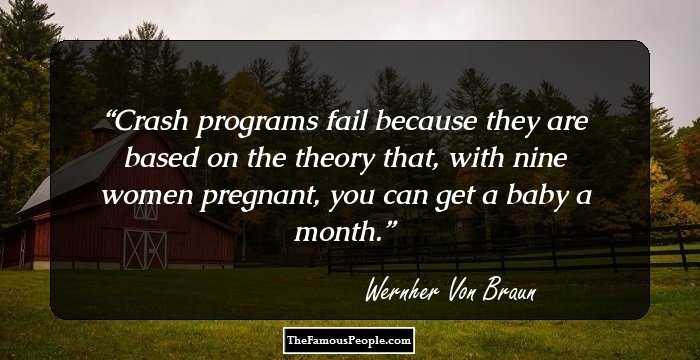 Crash programs fail because they are based on the theory that, with nine women pregnant, you can get a baby a month. 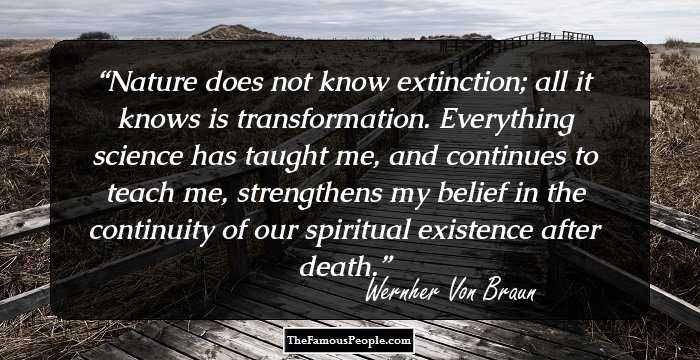 Nature does not know extinction; all it knows is transformation. Everything science has taught me, and continues to teach me, strengthens my belief in the continuity of our spiritual existence after death.