Famous As: German Poet Who Was Also a Noted Botanist and Philologist
Born On: January 30, 1781
Died On: August 21, 1838
Born In: Sivry-Ante, France
Died At Age: 57
Adelbert von Chamisso was an illustrious German botanist and poet. He is renowned for penning down âPeter Schlemihl,â the story of a man who sold his own shadow. He is also known for his works as a botanist and a number of species like the genera Camissonia Link and Chamissoa Kunth were named in his honor. His early writings also include, âLe Comte de Comminge,â which is a verse translation of the tragedy. His thoughts, writings and works also included a number of poems that added to his reputation. âFrauenliebe un-lebenâ is a cycle of lyrical poems which is till date popular. Take a look at the words of wisdom in form of thoughts and quotes by Adelbert von Chamisso. Let us browse through the interesting sayings and quotes by Adelbert von Chamisso which have been amassed from his poems, books, thoughts, writings, works, stories and life.
Listed In:
Scientists
Writers
Poets 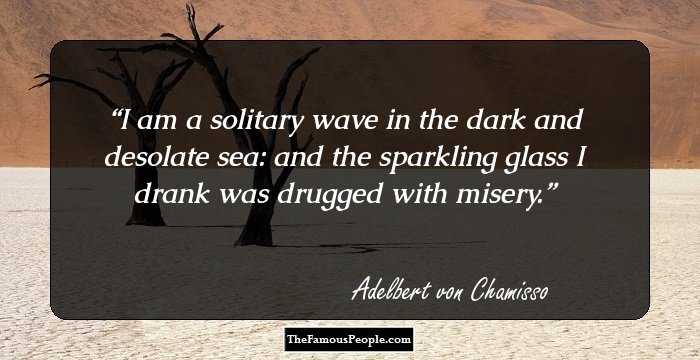 I am a solitary wave in the dark and desolate sea: and the sparkling glass I drank was drugged with misery. 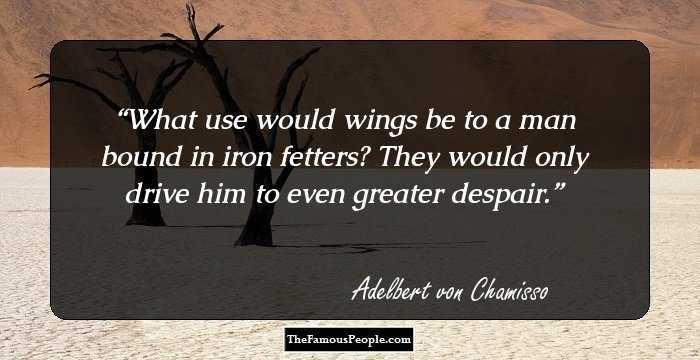 What use would wings be to a man bound in iron fetters? They would only drive him to even greater despair. 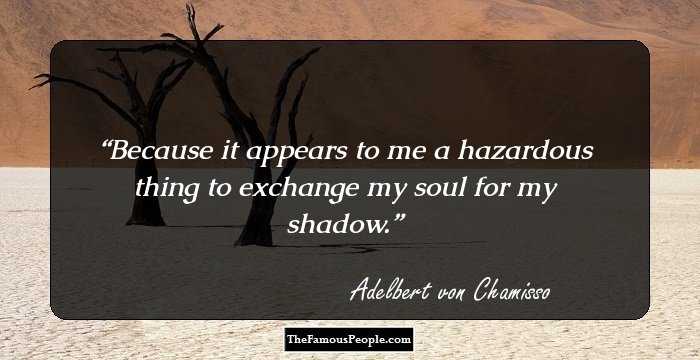 Because it appears to me a hazardous thing to exchange my soul for my shadow.

After a prosperous, but to me very wearisome, voyage, we came at last into port. Immediately on landing I got together my few effects; and, squeezing myself through the crowd, went into the nearest and humblest inn which first met my gaze. 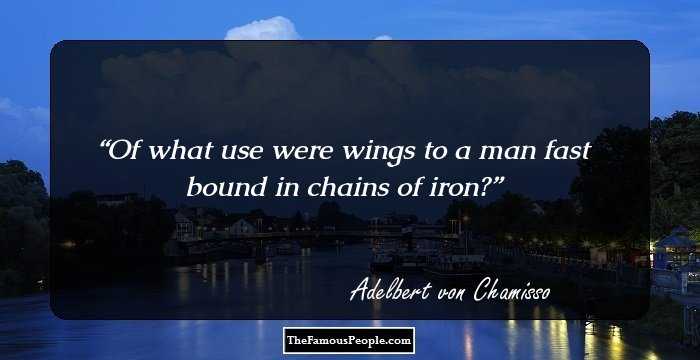 Of what use were wings to a man fast bound in chains of iron? 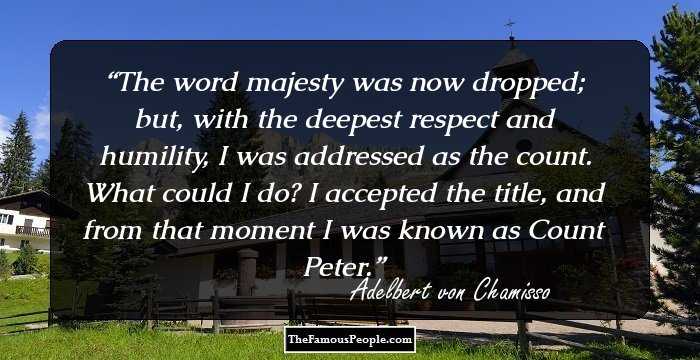 The word majesty was now dropped; but, with the deepest respect and humility, I was addressed as the count. What could I do? I accepted the title, and from that moment I was known as Count Peter. 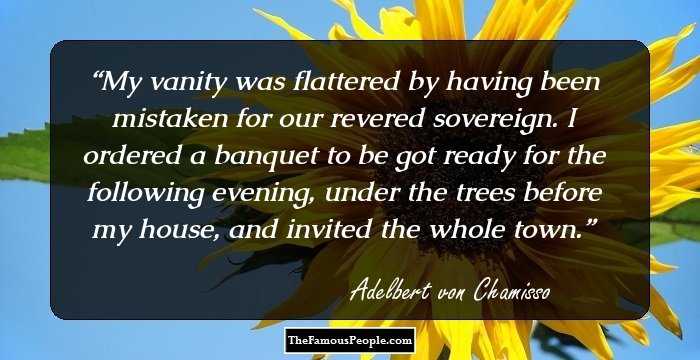 My vanity was flattered by having been mistaken for our revered sovereign. I ordered a banquet to be got ready for the following evening, under the trees before my house, and invited the whole town. 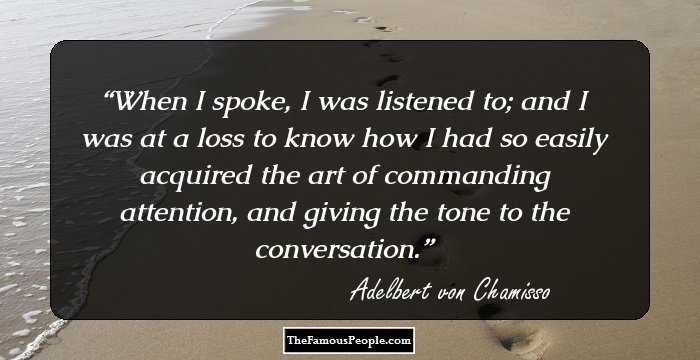 When I spoke, I was listened to; and I was at a loss to know how I had so easily acquired the art of commanding attention, and giving the tone to the conversation. 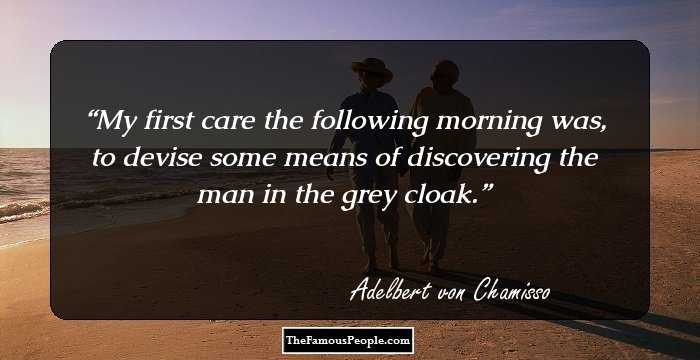 My first care the following morning was, to devise some means of discovering the man in the grey cloak. 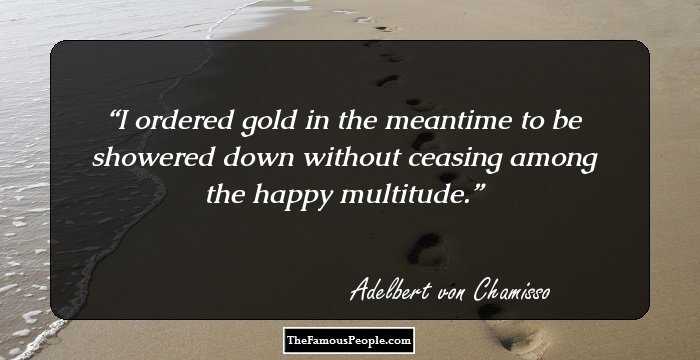 I ordered gold in the meantime to be showered down without ceasing among the happy multitude. 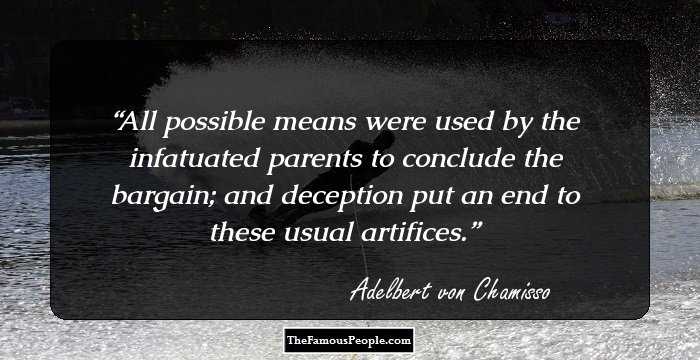 All possible means were used by the infatuated parents to conclude the bargain; and deception put an end to these usual artifices. 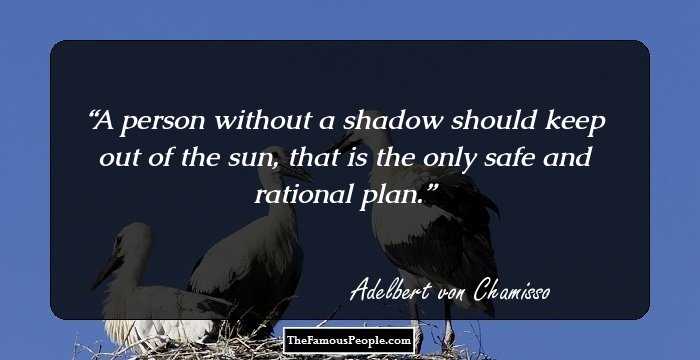 A person without a shadow should keep out of the sun, that is the only safe and rational plan. 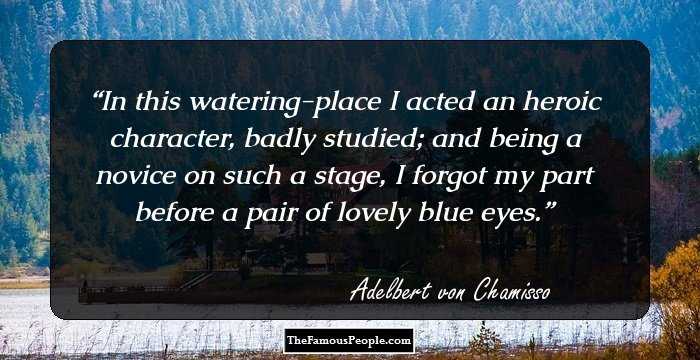 In this watering-place I acted an heroic character, badly studied; and being a novice on such a stage, I forgot my part before a pair of lovely blue eyes.

On recovering my senses, I hastened to quit a place where I hoped there was nothing further to detain me. I first filled my pockets with gold, then fastened the strings of the purse round my neck, and concealed it in my bosom.

This man, although he appeared so humble and embarrassed in his air and manners, and passed so unheeded, had inspired me with such a feeling of horror by the unearthly paleness of his countenance, from which I could not avert my eyes, that I was unable longer to endure it. 100 Famous quotes by Bertolt Brecht, the author of Life of Galileo 21 Inspiring Quotes By Hermann Hesse For Wordsmiths And Colorists 54 Inspiring Quotes By Novalis That Will Lift Your Spirits 70 Mind-Blowing Quotes By Hannah Arendt On Power, Politics And Philosophy