German mathematicianÂ David Hilbert is known as one of the most influential mathematicians of the nineteenth century. After graduation, David enrolled at the University of Konigsberg, studied mathematics, and was friends with Herman Minkowski, also aÂ German mathematician. During his initial days, David taught mathematics at the University of Konigsberg and Gottingen. Mathematicians like Ernest Zermelo and Hermann Weyl were some of his well-known students. David had supervised the dissertation projects of more than 69 students; some of them later became prominent mathematicians. Wilhelm Ackermann, Otto Blumenthal, Richard Courant and Hugo Steinhaus are some of them. Later Hilbert listed more than 20 unsolved mathematical questions at the international Congress of Mathematicians which was held in Paris during the year 1900. Two years later, he was appointed as the co-editor of âMathematische Annalenâ, one of the leading mathematical journals of the time. His other work includes co-authoring âGrundlagen der MathematikâÂ which is considered to be the follow-up book of âPrinciples of Mathematical Logic', written by Hilbert and Ackermann. His other famous book is âThe Foundations of Geometryâ. We have gathered a few of his quotes and sayings that relate to mathematics, rules, physics, spirit, man, numbers, religion, opinion and much more.Â . 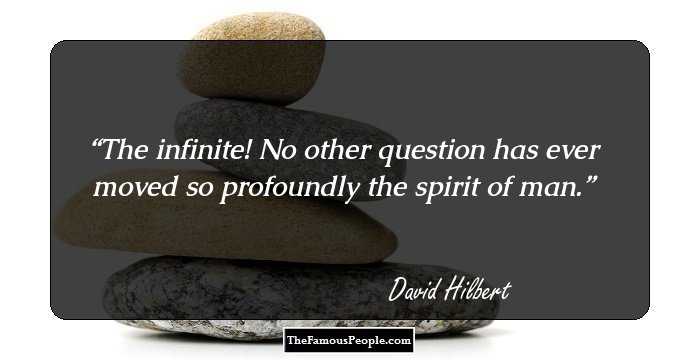 The infinite! No other question has ever moved so profoundly the spirit of man. 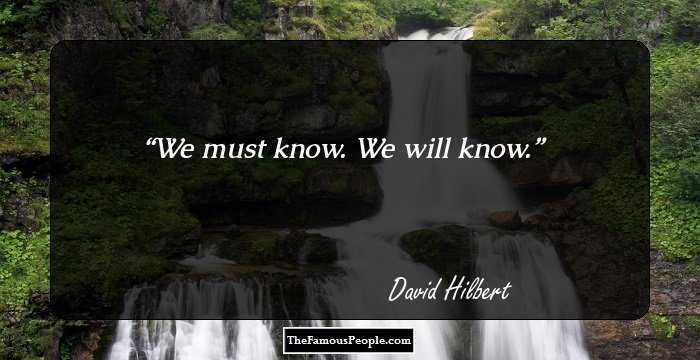 We must know. We will know. 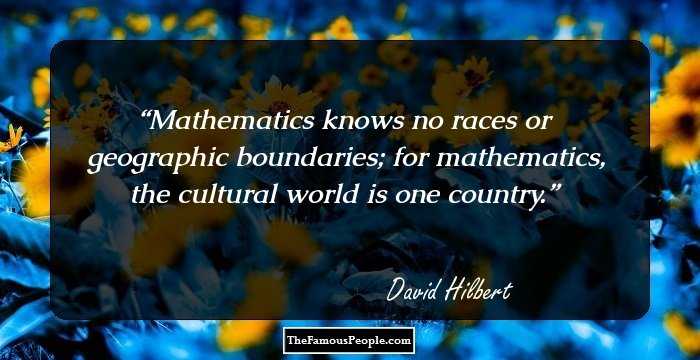 Mathematics knows no races or geographic boundaries; for mathematics, the cultural world is one country. 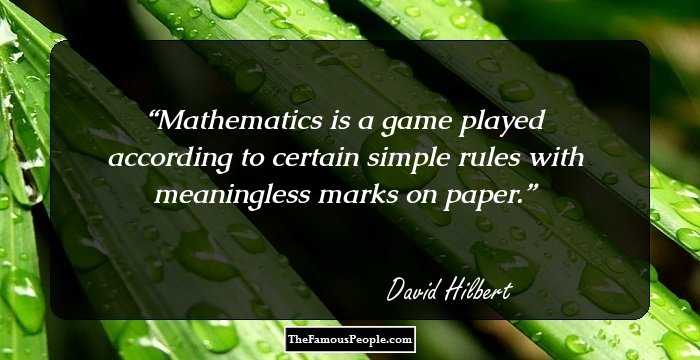 Mathematics is a game played according to certain simple rules with meaningless marks on paper.

Physics is becoming too difficult for the physicists. 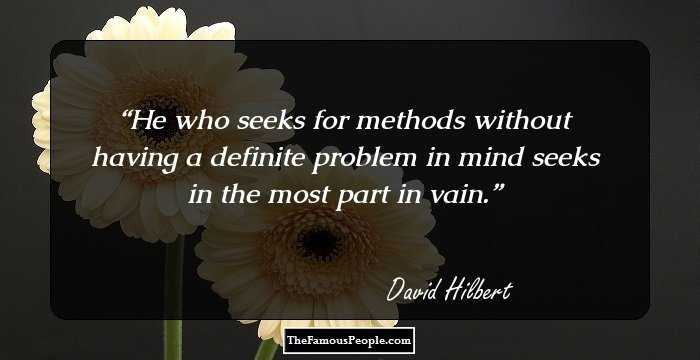 He who seeks for methods without having a definite problem in mind seeks in the most part in vain. 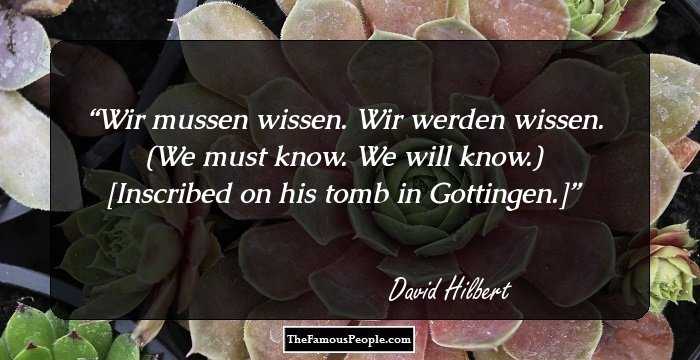 Wir mussen wissen. Wir werden wissen. (We must know. We will know.) [Inscribed on his tomb in Gottingen.] 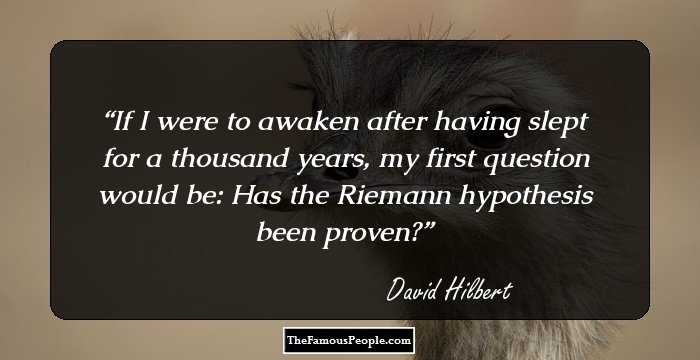 If I were to awaken after having slept for a thousand years, my first question would be: Has the Riemann hypothesis been proven? 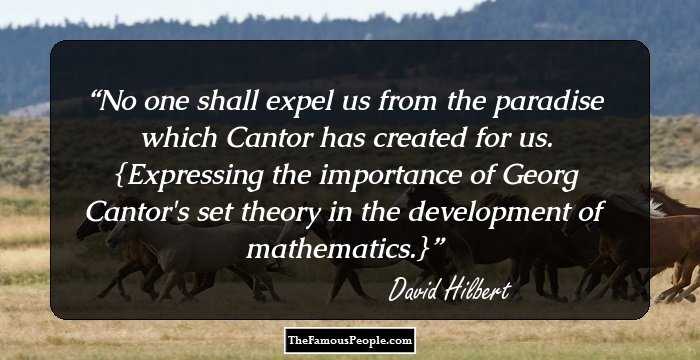 No one shall expel us from the paradise which Cantor has created for us. {Expressing the importance of Georg Cantor's set theory in the development of mathematics.} 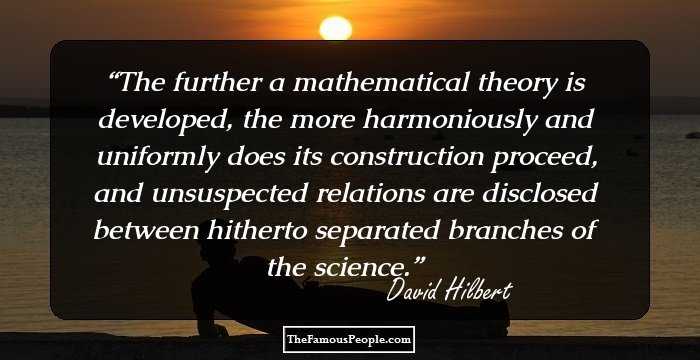 The further a mathematical theory is developed, the more harmoniously and uniformly does its construction proceed, and unsuspected relations are disclosed between hitherto separated branches of the science. 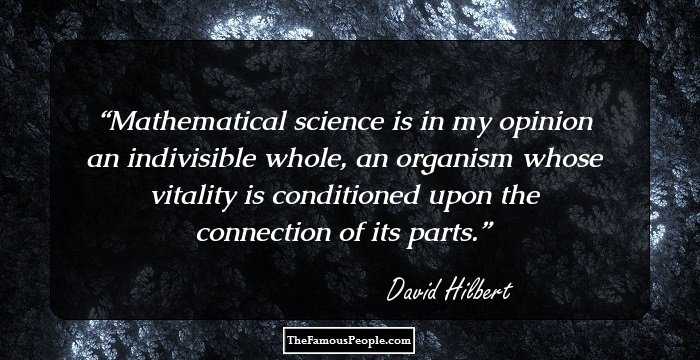 Mathematical science is in my opinion an indivisible whole, an organism whose vitality is conditioned upon the connection of its parts. 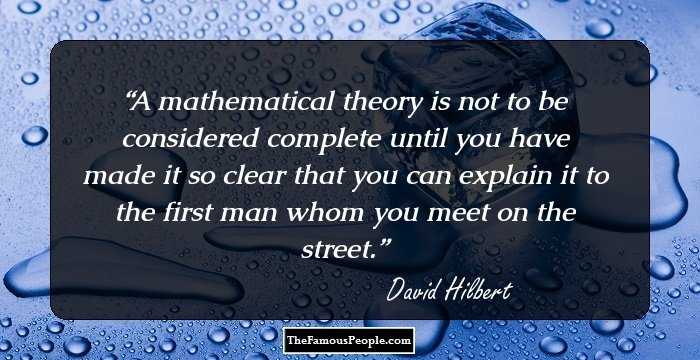 A mathematical theory is not to be considered complete until you have made it so clear that you can explain it to the first man whom you meet on the street. 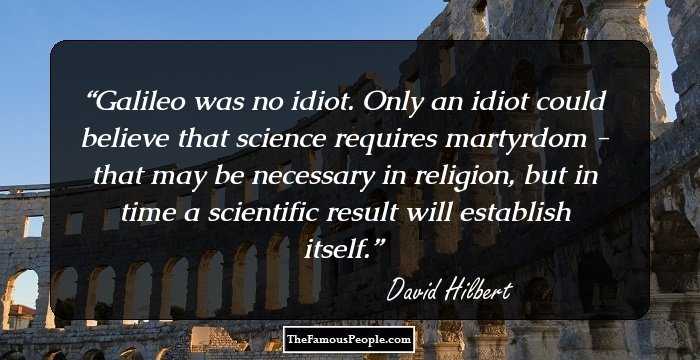 Galileo was no idiot. Only an idiot could believe that science requires martyrdom - that may be necessary in religion, but in time a scientific result will establish itself. 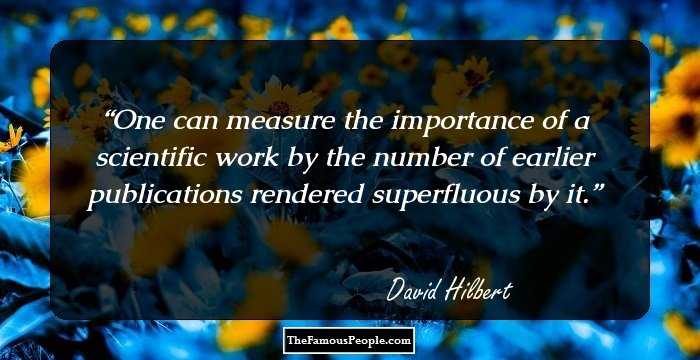 One can measure the importance of a scientific work by the number of earlier publications rendered superfluous by it. 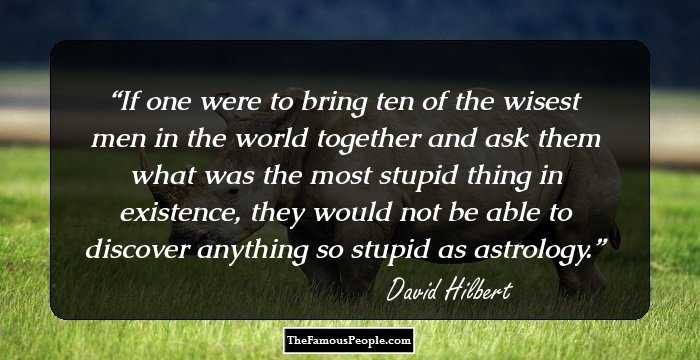 If one were to bring ten of the wisest men in the world together and ask them what was the most stupid thing in existence, they would not be able to discover anything so stupid as astrology. 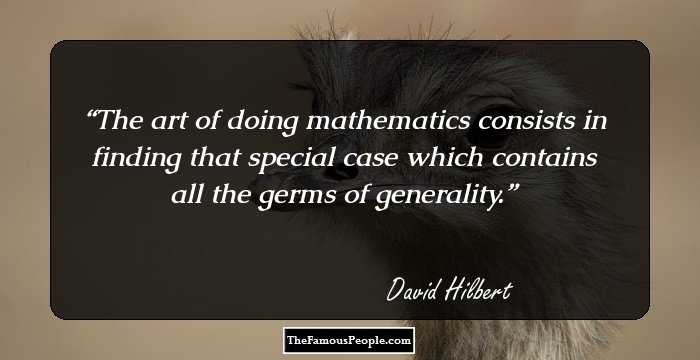 The art of doing mathematics consists in finding that special case which contains all the germs of generality.

How thoroughly it is ingrained in mathematical science that every real advance goes hand in hand with the invention of sharper tools and simpler methods which, at the same time, assist in understanding earlier theories and in casting aside some more complicated developments.