George Fredinand Ludwig Phillip Cantor was a famous German mathematician, known for building and discovering hierarchy of infinite sets. Cantor was born into a family of musicians and even had slight interest in music during his early age but that later changed. After graduating from the University of Zurich with specialization in mathematics, physics and philosophy, Cantor started working as a teacher in Berlin girlsâ school. He worked there for 10 years and in-between he also published a series of ten papers wherein he mentioned about the theory of numbers. Soon after that he started working on trigonometric series by Bernhard Riemann, a German mathematician and his work later came to be known as the set theory. His article âOn a Property of the Collection of All Real Algebraic Numbersâ, marked the beginning of set theory as a branch in mathematics. Cantor later extended his studies and published a series of six articles âMathematics Annalenâ which contained an introduction to this set theory. Despite the criticism he faced, he continued publishing papers and stated his âdiagonal argumentâ and proved the existence of uncountable set. His theory today is known as the âCantorâs Theoremâ. Being a renowned mathematician, he shared his views on various aspects of life including mathematics, research, life, success, failure, etc. We have collected some of his greatest quotes and sayings below.Â 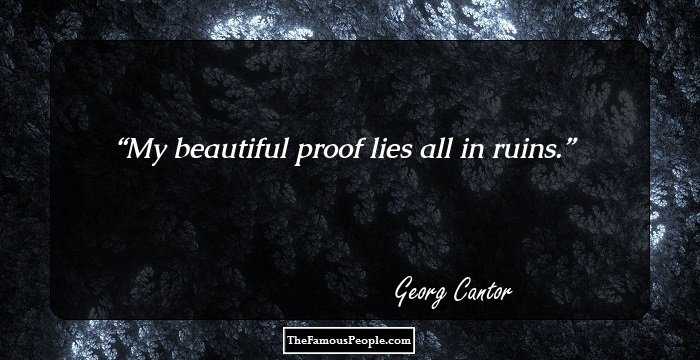 My beautiful proof lies all in ruins. 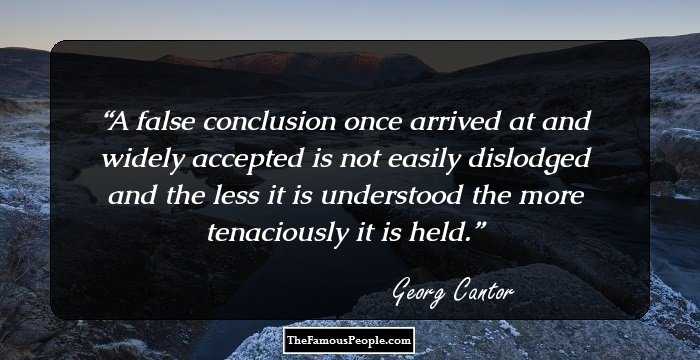 A false conclusion once arrived at and widely accepted is not easily dislodged and the less it is understood the more tenaciously it is held. 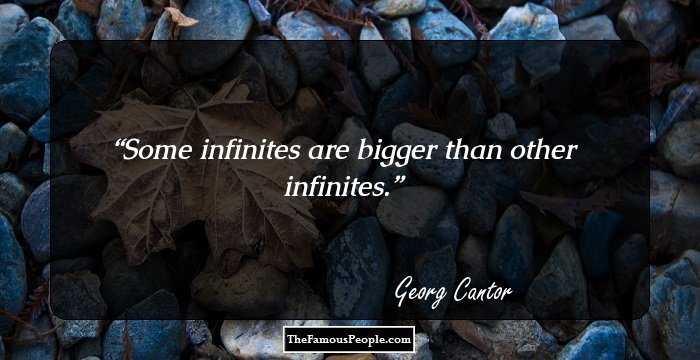 Some infinites are bigger than other infinites. 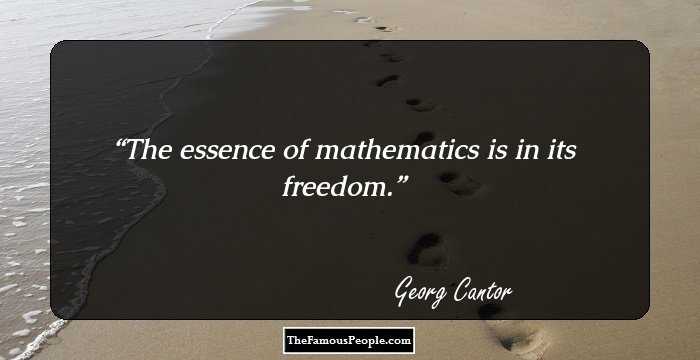 The essence of mathematics is in its freedom. 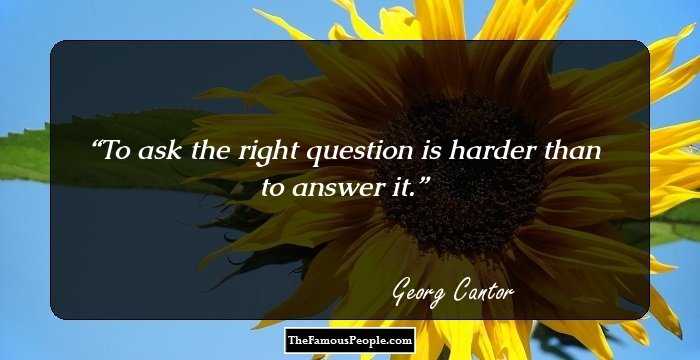 To ask the right question is harder than to answer it. 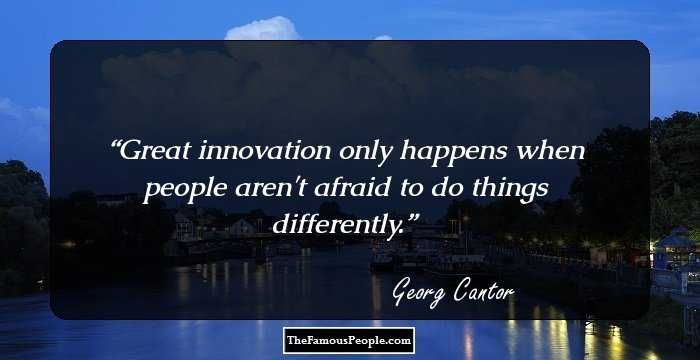 Great innovation only happens when people aren't afraid to do things differently. 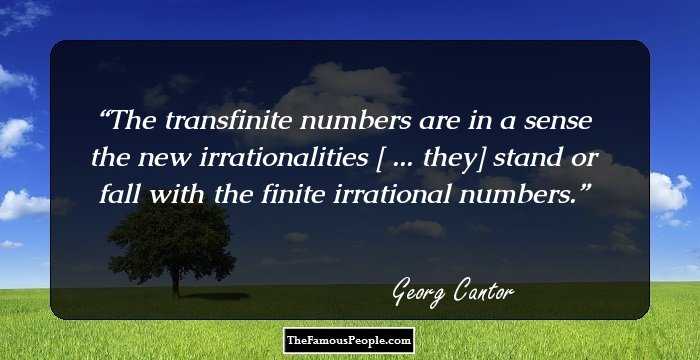 The transfinite numbers are in a sense the new irrationalities [ ... they] stand or fall with the finite irrational numbers. 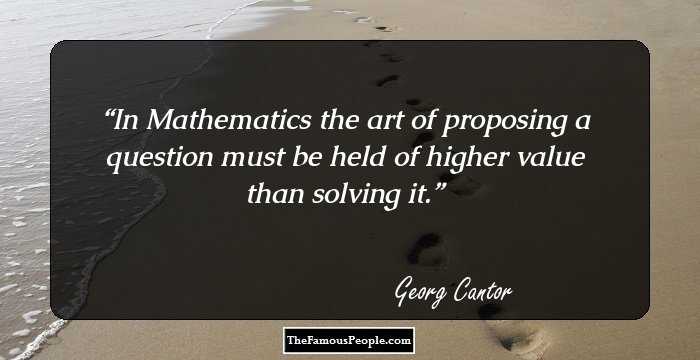 In Mathematics the art of proposing a question must be held of higher value than solving it. 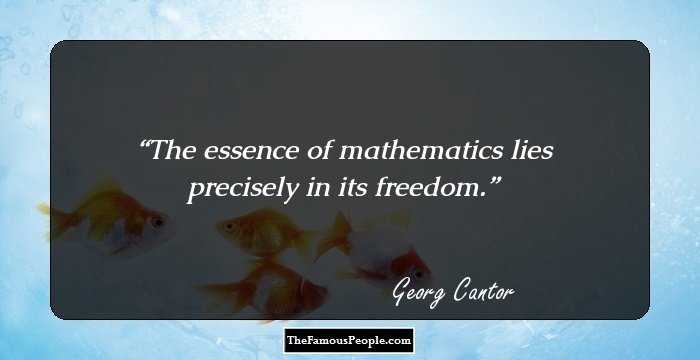 The essence of mathematics lies precisely in its freedom. 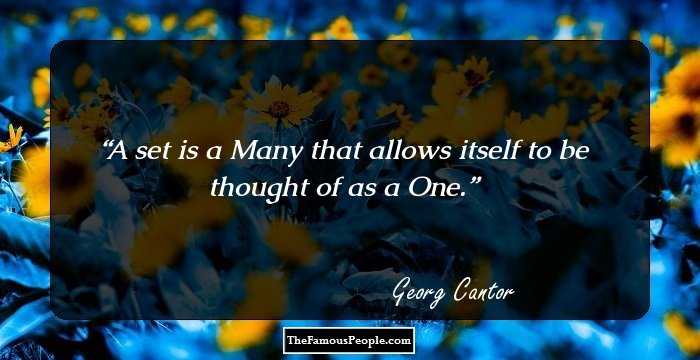 A set is a Many that allows itself to be thought of as a One.

The fear of infinity is a form of myopia that destroys the possibility of seeing the actual infinite, even though it in its highest form has created and sustains us, and in its secondary transfinite forms occurs all around us and even inhabits our minds. 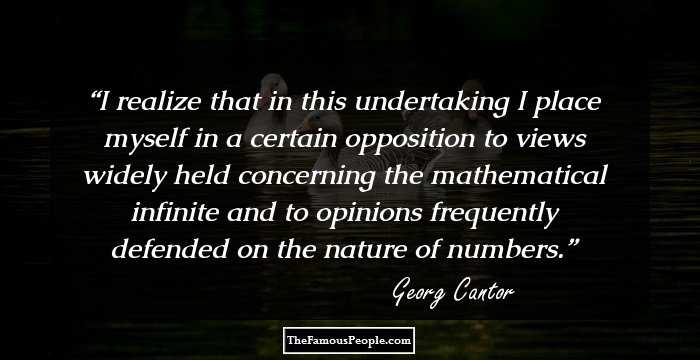 I realize that in this undertaking I place myself in a certain opposition to views widely held concerning the mathematical infinite and to opinions frequently defended on the nature of numbers. 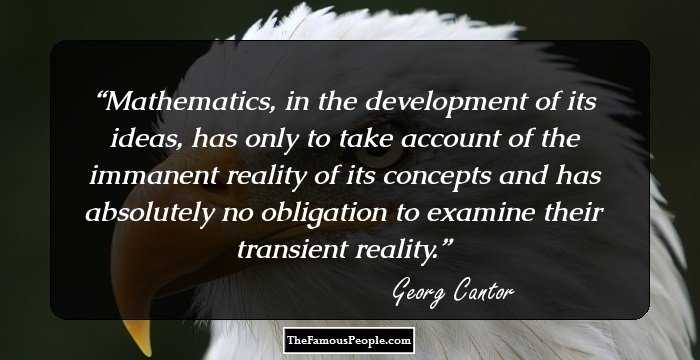 Mathematics, in the development of its ideas, has only to take account of the immanent reality of its concepts and has absolutely no obligation to examine their transient reality. 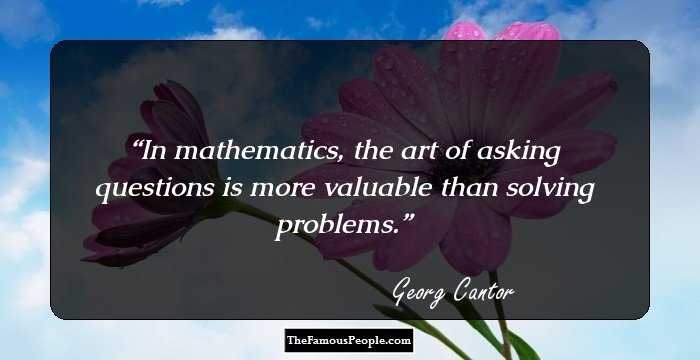 In mathematics, the art of asking questions is more valuable than solving problems. 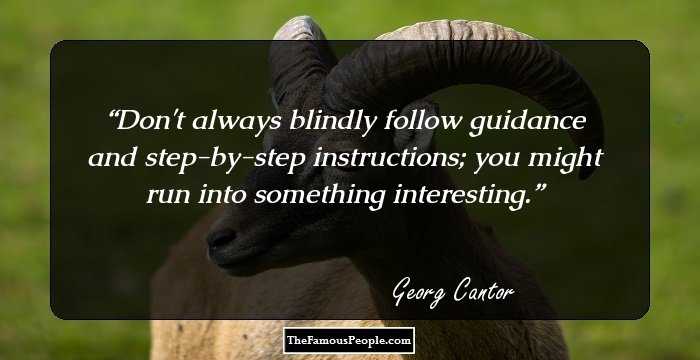 My theory stands as firm as a rock; every arrow directed against it will return quickly to its archer. How do I know this? Because I have studied it from all sides for many years; because I have examined all objections which have ever been made against the infinite numbers; and above all because I have followed its roots, so to speak, to the first infallible cause of all created things.

Will I
Georg Cantor 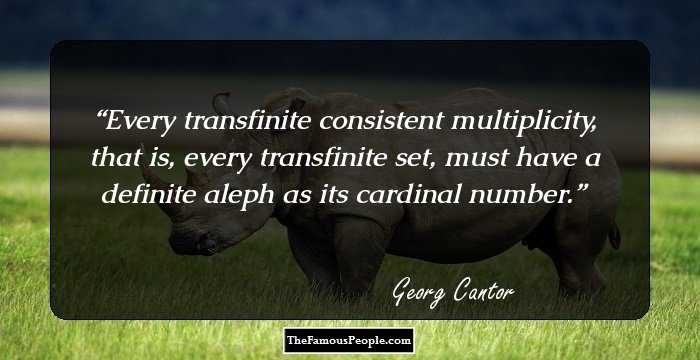 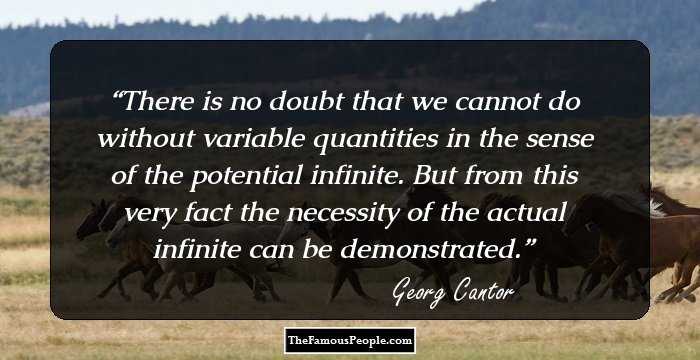 There is no doubt that we cannot do without variable quantities in the sense of the potential infinite. But from this very fact the necessity of the actual infinite can be demonstrated. 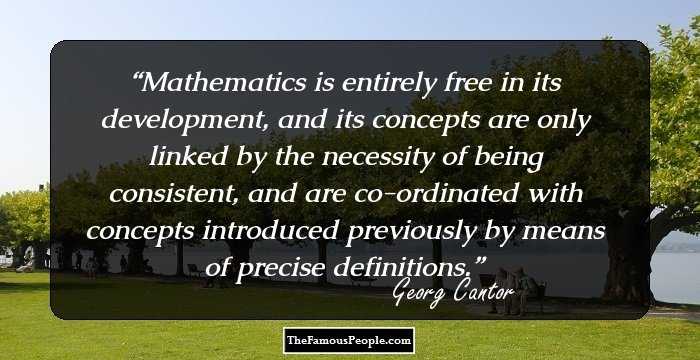 Mathematics is entirely free in its development, and its concepts are only linked by the necessity of being consistent, and are co-ordinated with concepts introduced previously by means of precise definitions.

The actual infinite arises in three contexts: first when it is realized in the most complete form, in a fully independent otherworldly being, in Deo, where I call it the Absolute Infinite or simply Absolute; second when it occurs in the contingent, created world; third when the mind grasps it in abstracto as a mathematical magnitude, number or order type.

The transfinite numbers are in a certain sense themselves new irrationalities and in fact in my opinion the best method of defining the finite irrational numbers is wholly disimilar to, and I might even say in priciple the same as, my method described above of introducing trasfinite numbers. One can say unconditionally: the transfinite numbers stand or fall with the finite irrational numbers; they are like each other in their innermost being; for the former like the latter are definite delimited forms or modifications of the actual infinite.

This view [of the infinite], which I consider to be the sole correct one, is held by only a few. While possibly I am the very first in history to take this position so explicitly, with all of its logical consequences, I know for sure that I shall not be the last!

I entertain no doubts as to the truths of the tranfinites, which I recognized with God's help and which, in their diversity, I have studied for more than twenty years; every year, and almost every day brings me further in this science.

Me I
Georg Cantor

I am so in favor of the actual infinite that instead of admitting that Nature abhors it, as is commonly said, I hold that Nature makes frequent use of it everywhere, in order to show more effectively the perfections of its Author. Thus I believe that there is no part of matter which is not - I do not say divisible - but actually divisible; and consequently the least particle ought to be considered as a world full of an infinity of different creatures.

What I assert and believe to have demonstrated in this and earlier works is that following the finite there is a transfinite (which one could also call the supra-finite), that is an unbounded ascending lader of definite modes, which by their nature are not finite but infinite, but which just like the finite can be determined by well-defined and distinguishable numbers.