Famous As: Author
Born On: October 14, 1938
Born In: Akron
Age: 84 Years
John Dean is a prominent American author, investment banker, lecturer and columnist. During 1970-73 he served as the White House Counsel for the then President of America, Richard Nixon. He is renowned not only for his writings and thoughts but also his profound association in the events that lead to ensuing Watergate scandal and Watergate crimes. Though he was considered as the âmaster manipulatorâ he pleaded guilty and his prison-tenure was decreased. He found solace in writing and expressed his opinions, thoughts, views and experiences on the Scandal and Nixon White House Books which proved controversial yet became highly popular and hurled him into the limelight. We have created a treasure trove of quotes and sayings by John Dean which have been extricated from his writings, works, thoughts, books, interviews, populace utterances and life. Let us have a look at the quotes and thoughts by John Dean.
Listed In:
Writers
Lawyers & Judges 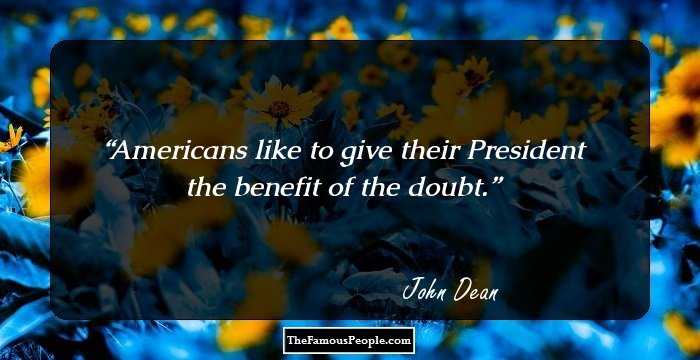 Americans like to give their President the benefit of the doubt. 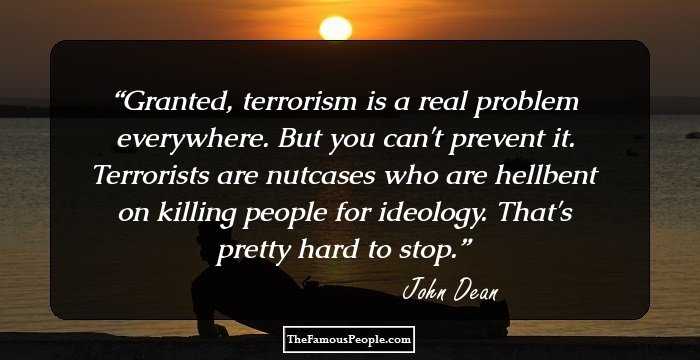 Granted, terrorism is a real problem everywhere. But you can't prevent it. Terrorists are nutcases who are hellbent on killing people for ideology. That's pretty hard to stop. 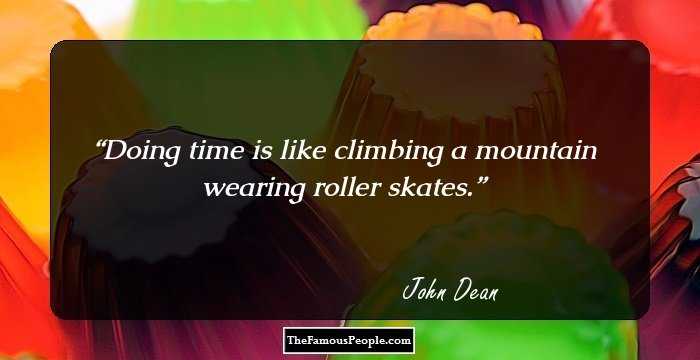 Doing time is like climbing a mountain wearing roller skates. 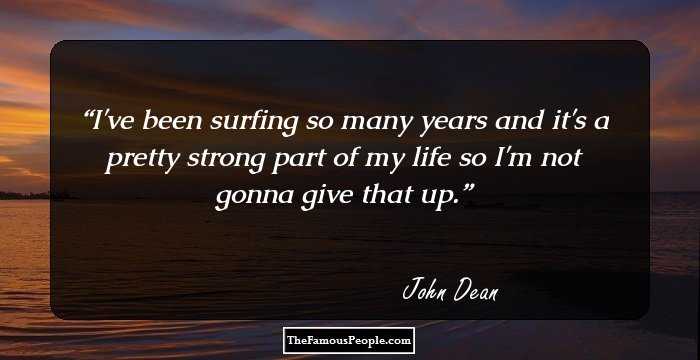 I've been surfing so many years and it's a pretty strong part of my life so I'm not gonna give that up. 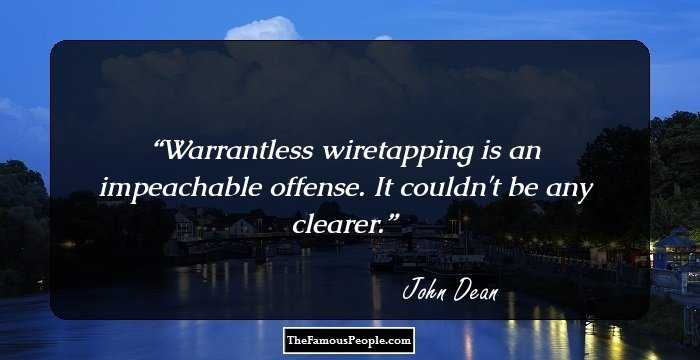 Warrantless wiretapping is an impeachable offense. It couldn't be any clearer. 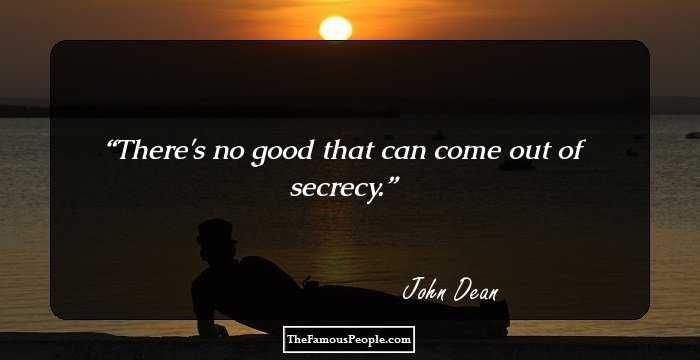 There's no good that can come out of secrecy. 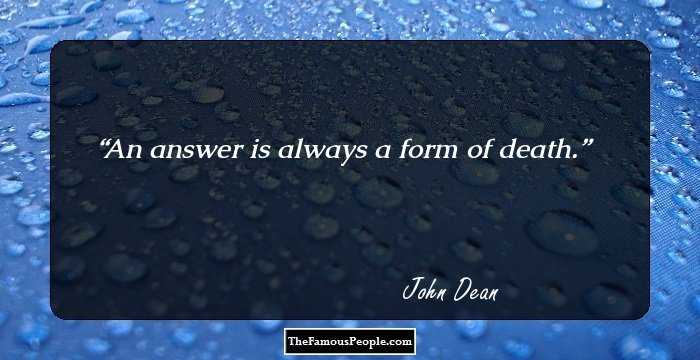 An answer is always a form of death. 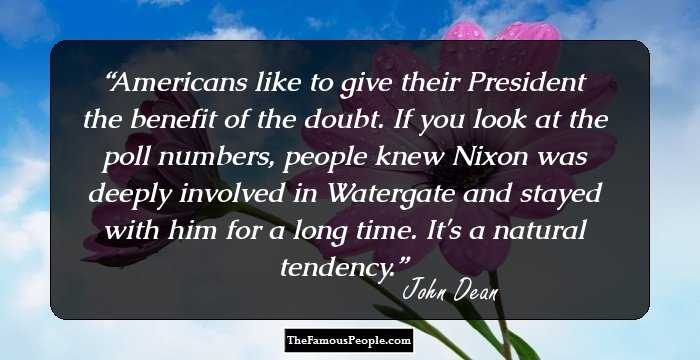 Americans like to give their President the benefit of the doubt. If you look at the poll numbers, people knew Nixon was deeply involved in Watergate and stayed with him for a long time. It's a natural tendency. 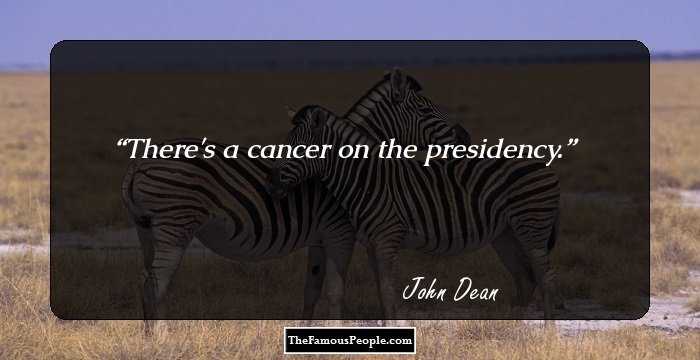 There's a cancer on the presidency. 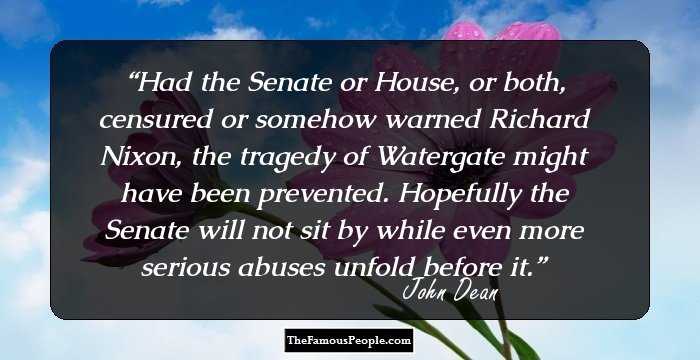 Had the Senate or House, or both, censured or somehow warned Richard Nixon, the tragedy of Watergate might have been prevented. Hopefully the Senate will not sit by while even more serious abuses unfold before it. 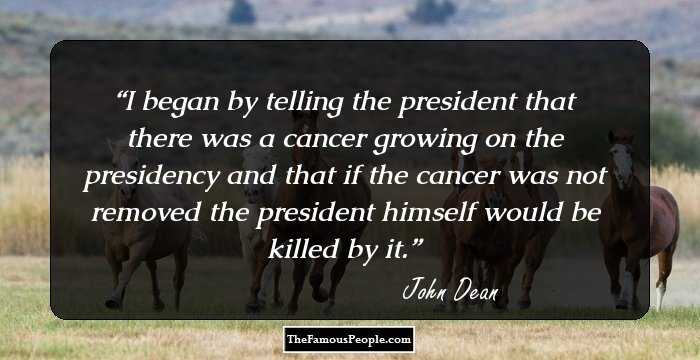 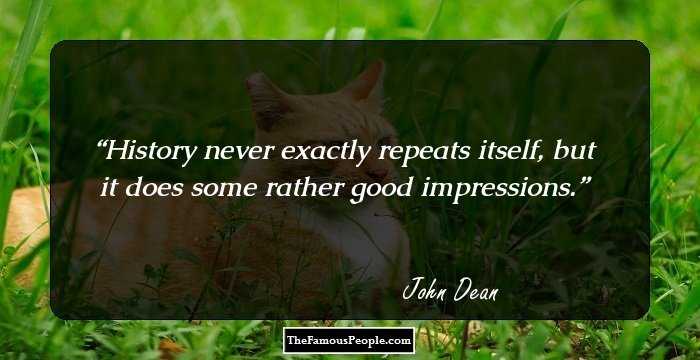 History never exactly repeats itself, but it does some rather good impressions.

Who voted for Trump? Who are these people who, as he famously said, would let him shoot someone on Fifth Avenue and still support him? It's people who want too strong a leader, who would do what that leader tells them. Similar to the Europeans following Mussolini and Hitler. There's a streak in humanity that likes that kind of leader. That's Trump's core. Authoritarianism.

9/11 changed everything. We lose more Americans every year drowning in the bathtub than through terrorism. But terrorism has been used as a lever to frighten people, pass legislation, sound tough and coerce us into giving away our rights in pursuit of phantom problems.

Bush had expertise in one thing: How to run a Presidential campaign. He understands campaigns and Presidential politics. He has no interest or disposition or I think probably - he's not stupid, but he's not bright, he's not a rocket scientist - he isn't interested in policy.

I don't think Trump is a deeply self-aware person. But he's absolutely off the charts as a narcissist. He is the consummate narcissistic salesman. He is in fact a sick man. And that's potentially very dangerous. The only positive thing about Trump is that he has no ideology, he is an empty vessel, surrounded by people who give him ideas, and it only matters which ideas will shine the light on Trump.

To me the fact that a Vice President can go to Capitol Hill and lobby for torture is just unbelievable. Just unbelievable! The fact that a small clique of attorneys in the Department of Justice can write how can we get around the Geneva Conventions so that we can torture during interrogations - I can't even get their mentally. And when you read their briefs, they didn't get there mentally.

Donald Trump hasn't blown us up yet. But he terrifies me. For one thing, the incompetence. He doesn't have any real understanding of how the presidency works or even how Washington works. The only comfort I have is that he is so imcompetent that he can't do anything to cause a real problem.

Trump hasn't really done anything yet to abuse his powers. I don't even know if he knows what all his powers are as president. And that worries me. He will learn. After he learns how the presidency works, he could become much more dangerous, because his personality doesn't change. Once presidents find their powers, they don't give them up. They use them.

One of the reasons I thought a censure resolution was appropriate was because if somebody had censured Nixon or even if a resolution of either house had passed, saying what you're doing is unacceptable to Congress, that shot across the bow might have straightened him up. 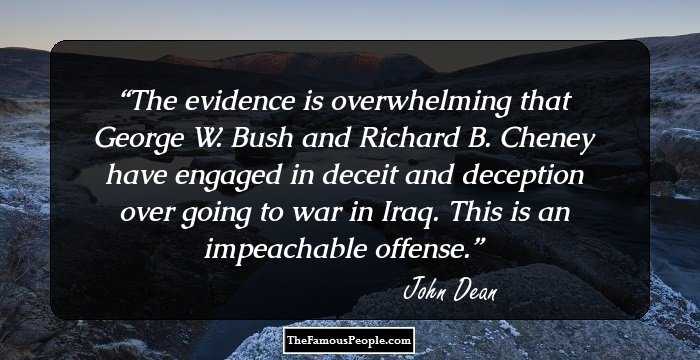 The evidence is overwhelming that George W. Bush and Richard B. Cheney have engaged in deceit and deception over going to war in Iraq. This is an impeachable offense.

There are similiarities between Nixon and Trump, no question. But there are also big differences. Nixon was shy, private, he attacked the media behind closed doors and insulted people behind their backs, and we only know about it because of the taping system in the Oval Office. The dark side, the vengeance we only know because of these tapes. Trump is right out and front with it. He actually campaigned on how nasty he can be, which found resonance with enough voters to get him into the White House.