Famous As: Academic
Born On: May 27, 1931
Died On: March 2, 2012
Born In: Denver, Colorado, United States
Died At Age: 80
James Q. Wilson was a distinguished American political scientist, academic, and an authority on public administration. He spent a major part of his career serving as a professor at the Harvard University and the UCLA. He also served as the Presidentâs Council on Bioethics, lead the Council of Academic Advisors as the chairman at the American Enterprise Institute and was also a part of the Presidentâs Foreign Intelligence Advisory Board. Wilson was also appointed at Harvard-MIT as the Director of Joint Centre For Urban Studies. He was the co-author of âAmerican Governmentâ, one of the leading university textbooks. He expressed his views, thoughts, opinions and shared his experiences on subjects close to his heart through his writings, articles, scholarly books, op-ed essays and works. Read through the corpus of quotable sayings and quotes by James Q. Wilson. Take a look at the interesting thoughts and quotes by James Q. Wilson.
Listed In:
Writers
Quotes by Famous People
Intellectuals & Academics 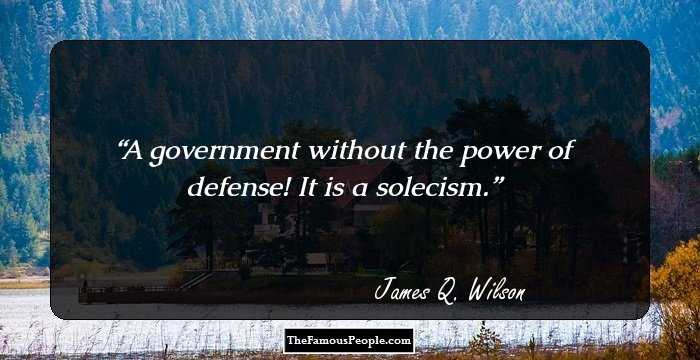 A government without the power of defense! It is a solecism. 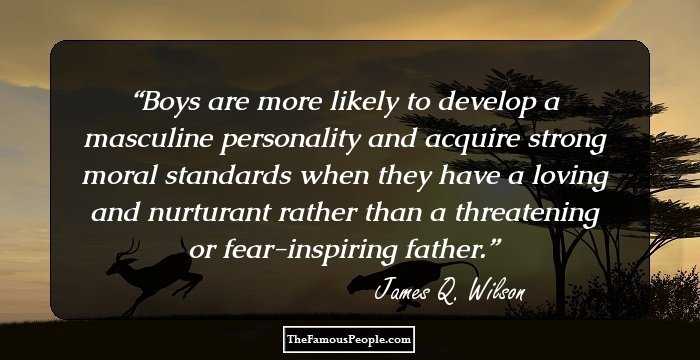 Boys are more likely to develop a masculine personality and acquire strong moral standards when they have a loving and nurturant rather than a threatening or fear-inspiring father. 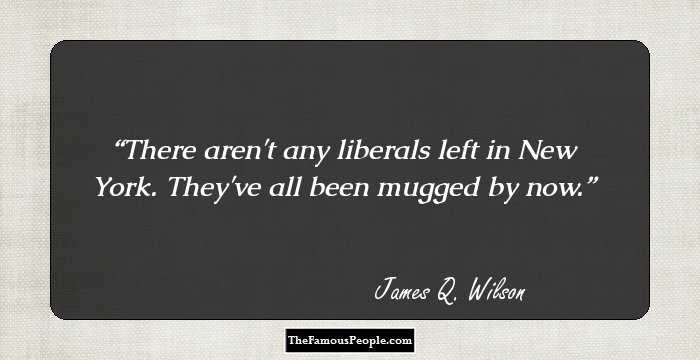 There aren't any liberals left in New York. They've all been mugged by now. 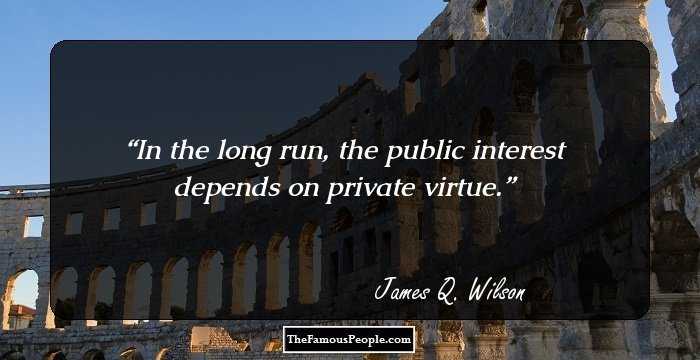 In the long run, the public interest depends on private virtue. 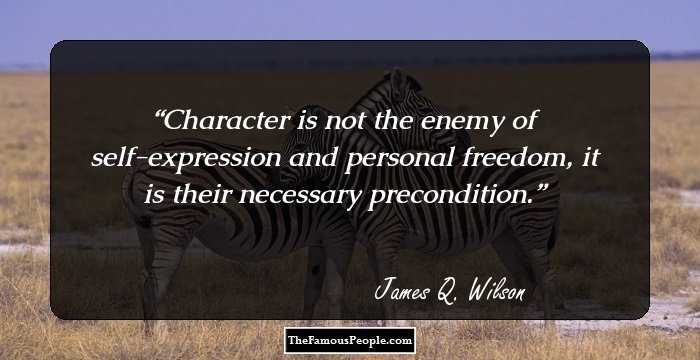 Character is not the enemy of self-expression and personal freedom, it is their necessary precondition. 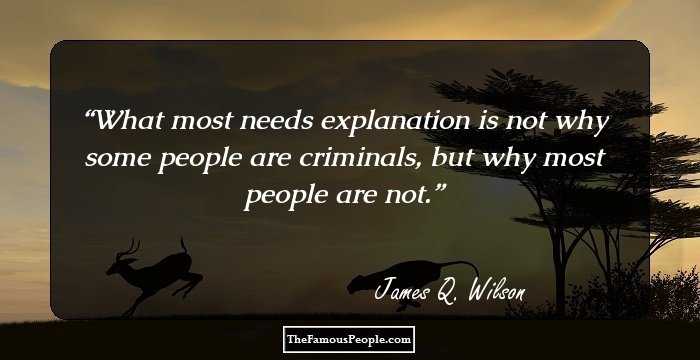 What most needs explanation is not why some people are criminals, but why most people are not. 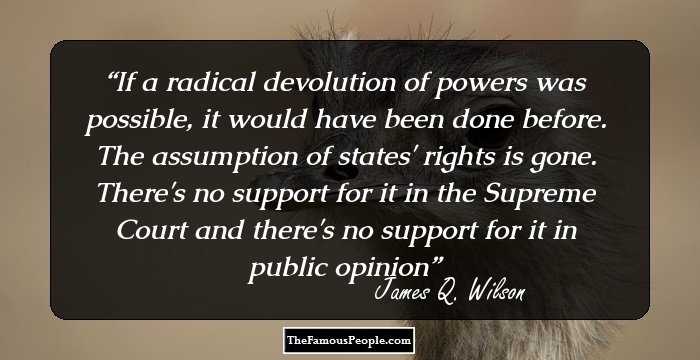 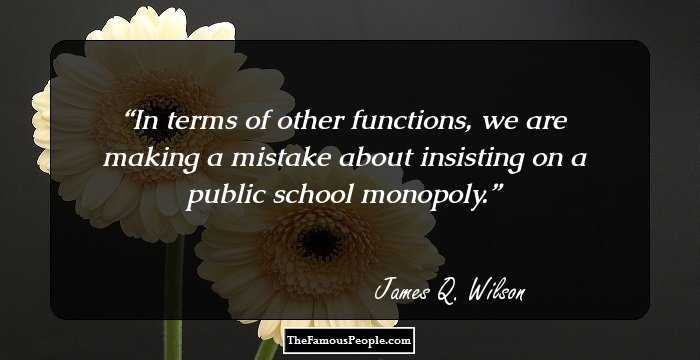 In terms of other functions, we are making a mistake about insisting on a public school monopoly. 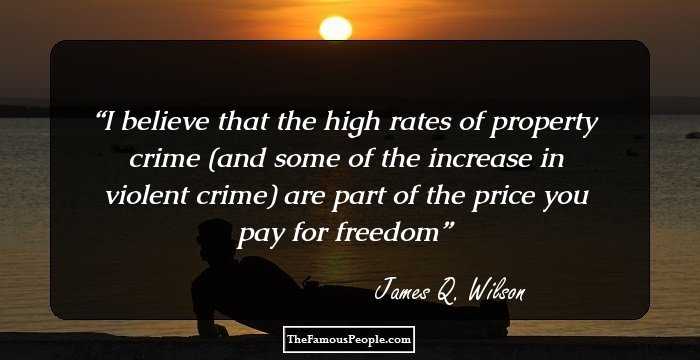 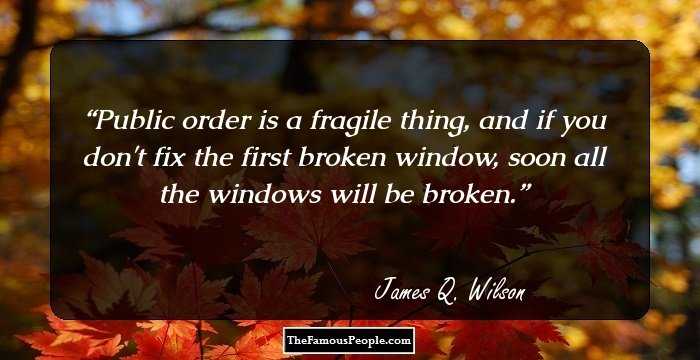 Public order is a fragile thing, and if you don't fix the first broken window, soon all the windows will be broken. 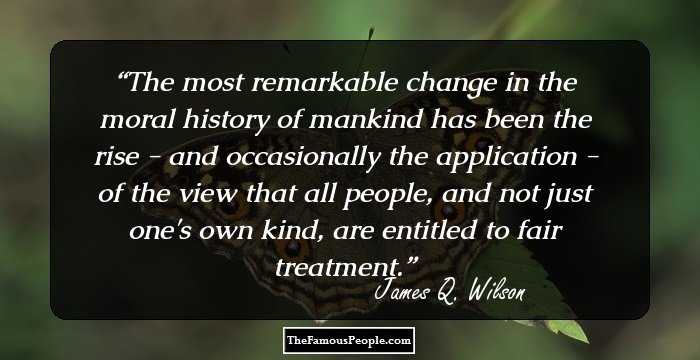 The most remarkable change in the moral history of mankind has been the rise - and occasionally the application - of the view that all people, and not just one's own kind, are entitled to fair treatment. 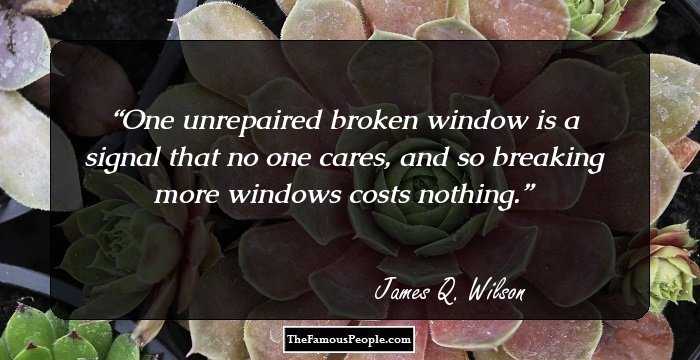 One unrepaired broken window is a signal that no one cares, and so breaking more windows costs nothing. 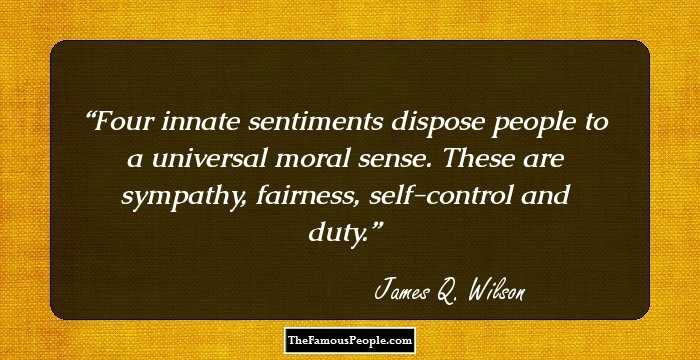 Broken Window Theory: Consider a building with a few broken windows. If the windows are not repaired, the tendency is for vandals to break a few more windows. Eventually, they may even break into the building, and if it's unoccupied, perhaps become squatters or light fires inside. Or consider a sidewalk. Some litter accumulates. Soon, more litter accumulates. Eventually, people even start leaving bags of trash from take-out restaurants there or even break into cars.

Many, if not most, of the difficulties we experience in dealing with government agencies arise from the agencies being part of a fragmented and open political systemâ¦The central feature of the American constitutional systemâthe separation of powersâexacerbates many of these problems. The governments of the US were not designed to be efficient or powerful, but to be tolerable and malleable. Those who designed these arrangements always assumed that the federal government would exercise few and limited powers.

The selection process has been powerful enough to produce one indisputable outcome: the family is a universal human institution. . . . In virtually every society into which historians or anthropologists have inquired, one finds people living together on the basis of kinship ties and having responsibility for raising children. . . . Even in societies where men and women have relatively unrestricted sexual access to one another beginning at an early age, marriage is still the basis for family formation. It is desired by the partners and expected by society.

Window-breaking does not necessarily occur on a large scale because some areas are inhabited by determined window-breakers whereas others are populated by window-lovers; rather, one unrepaired broken window is a signal that no one cares, and so breaking more windows costs nothing.

It's no surprise that academics in this country have been generally suspicious of business or that in a time like this, when general public confidence in the corporation has fallen, the expressions of hostility grow sharper.

I know my political ideas affect what I write, but I've tried to follow the facts wherever they land. Every topic I've written about begins as a question. How do police departments behave? Why do bureaucracies function the way they do? What moral intuitions do people have? How do courts make their decisions? What do blacks want from the political system? I can honestly say I didn't know the answers to those questions when I began looking into them.

Arresting a single drunk or a single vagrant who has harmed no identifiable person seems unjust, and in a sense it is. But failing to do anything about a score of drunks or a hundred vagrants may destroy an entire community.

The view that we know less than we thought we knew about how to change the human condition came, in time, to be called neoconservatism. Many ... , myself included, disliked the term because we did not think we were conservative, neo or paleo. (I voted for John Kennedy, Lyndon Johnson and Hubert Humphrey and worked in the latter's presidential campaign.) It would have been better if we had been called policy skeptics; that is, people who thought it was hard, though not impossible, to make useful and important changes in public policy.

A particular rule that seems to make sense in the individual case makes no sense when it is made a universal rule and applied to all cases. It makes no sense because it fails to take into account the connection between one broken window left untended and a thousand broken windows.