Famous As: Translator
Born On: March 19, 1821
Died On: October 20, 1890
Born In: Torquay
Died At Age: 69
Richard Francis Burton was an English explorer, linguist, fencer, orientalist, geographer, spy and poet. He was a person who liked learning different languages and learned Arabic during his college. He was posted in India during the term of his Army Service and there he learned various languages like Hindi and Gujarati. His skill of learning languages helped him become the best intelligence officer and he successfully carried many covert operations. He further moved to France where he wrote four books on India and also went on a Muslim pilgrimage to Mecca and Medina disguised as an Arab trader. He recorded his experiences in a travelogue âA Personal Narrative of a Pilgrimage to Al-Madinah and Meccahâ which made him popular as it was impossible for a non-Muslim to go into these cities. This encouraged him to further carry more dangerous expeditions like finding the source of the White Nile. During the expedition, he was attacked by the Somali Warriors and severely injured while one of his friends lost his life. These expeditions helped him establish a reputation as an explorer. Here is a collection of quotes and sayings coming straight from the heart of an explorer. Read on the most noted quotations and thoughts by Richard Francis Burton.
Listed In:
Writers
Quotes by Famous People
Intellectuals & Academics 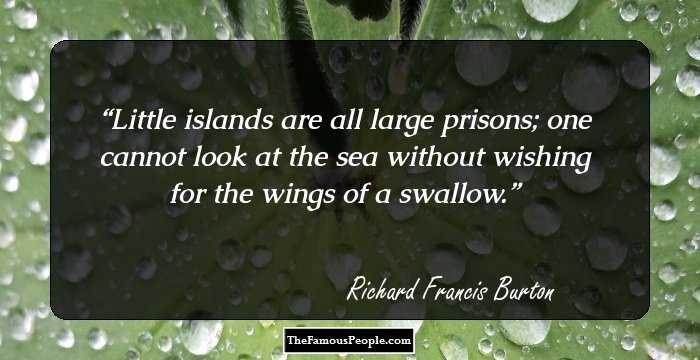 Little islands are all large prisons; one cannot look at the sea without wishing for the wings of a swallow. 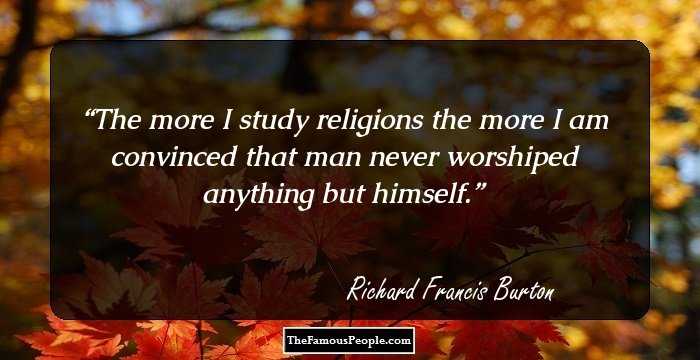 The more I study religions the more I am convinced that man never worshiped anything but himself. 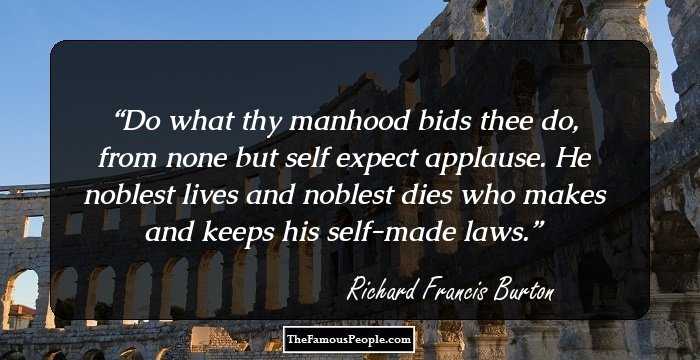 Do what thy manhood bids thee do, from none but self expect applause. He noblest lives and noblest dies who makes and keeps his self-made laws. 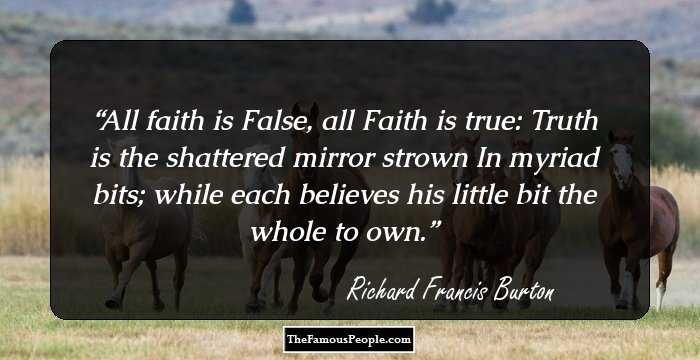 All faith is False, all Faith is true: Truth is the shattered mirror strown In myriad bits; while each believes his little bit the whole to own. 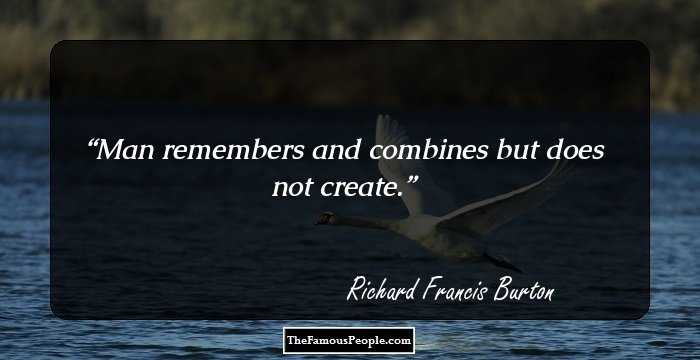 Man remembers and combines but does not create. 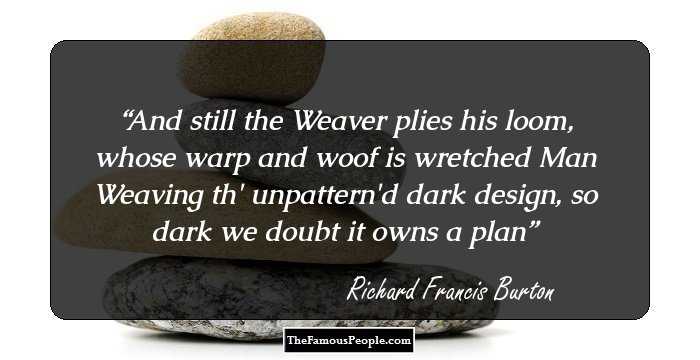 And still the Weaver plies his loom, whose warp and woof is wretched Man Weaving th' unpattern'd dark design, so dark we doubt it owns a plan 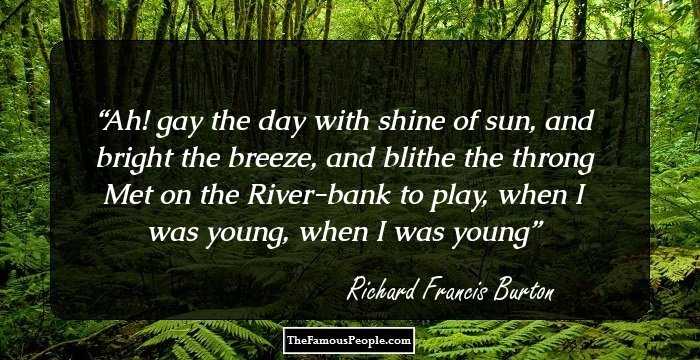 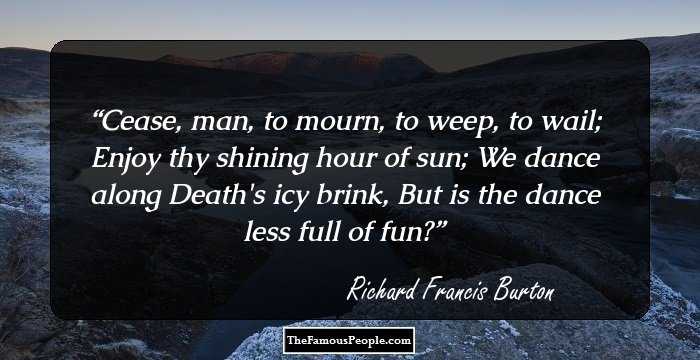 Cease, man, to mourn, to weep, to wail; Enjoy thy shining hour of sun; We dance along Death's icy brink, But is the dance less full of fun? 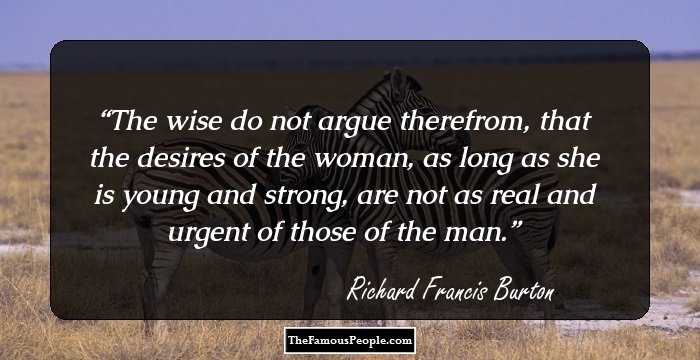 The wise do not argue therefrom, that the desires of the woman, as long as she is young and strong, are not as real and urgent of those of the man. 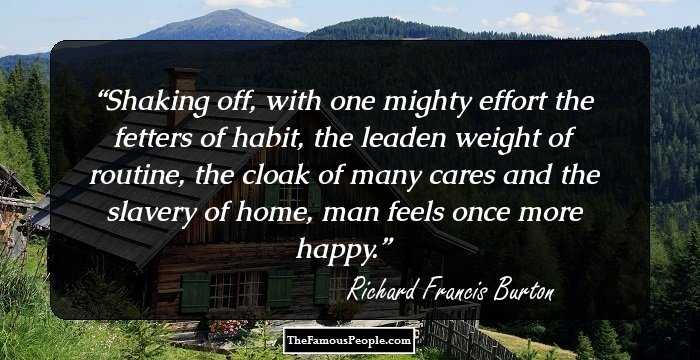 Shaking off, with one mighty effort the fetters of habit, the leaden weight of routine, the cloak of many cares and the slavery of home, man feels once more happy. 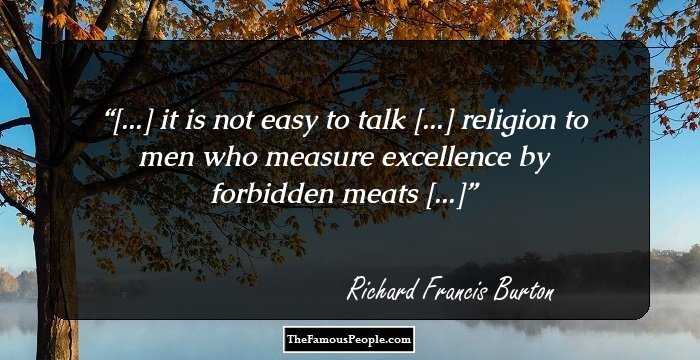