Famous As: Actress and Comedian Known for Her Role in the Series: 'The Office' and 'The Mindy Project'
Born On: June 24, 1979
Born In: Cambridge, Massachusetts, United States
Age: 43 Years
Vera Mindy Chokalingam, famous as Mindy Kaling, is a celebrated American producer, actress, comedian, and writer. She gained recognition for her performance in âThe Office,â where she portrayed Kelly Kapoor. She also served as the executive producer, director, and writer for the same. She also earned a âPrimetime Emmy Awardâ nomination for her work on the series. She rose to prominence for starring, writing, producing and creating the comedy series âThe Mindy Project.â Some of her other noteworthy works include âFour Weddings And A Funeral,â âChampions,â âNever Have I Ever,â âLate Night,â âWreck-It Ralph,â âThe Night Before,â âDespicable Me,â âInside Out,â and more. She has also written two New York Times top-selling memoirs, âWhy Not Me?,â and âIs Everyone Hanging Out Without Me? (And Other Concerns).â We bring to you popular sayings by Mindy Kaling.
Listed In:
Film & Theater Personalities
Actresses
Comedians 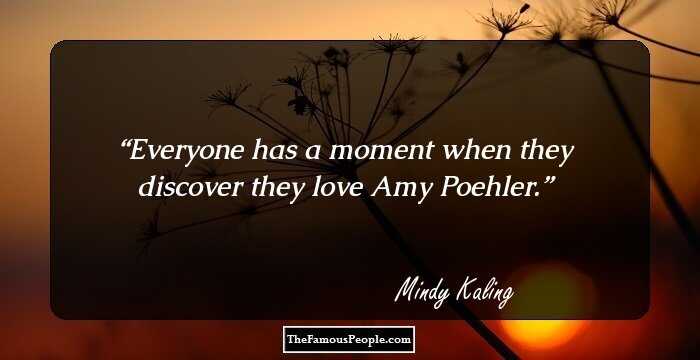 Everyone has a moment when they discover they love Amy Poehler. 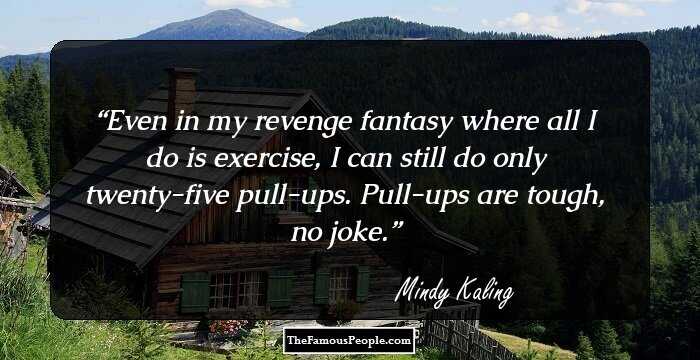 Even in my revenge fantasy where all I do is exercise, I can still do only twenty-five pull-ups. Pull-ups are tough, no joke. 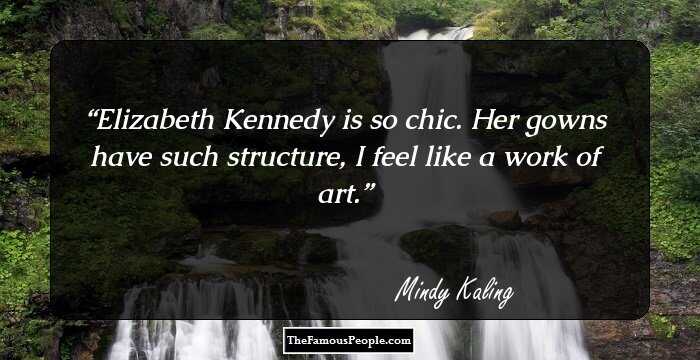 Elizabeth Kennedy is so chic. Her gowns have such structure, I feel like a work of art. 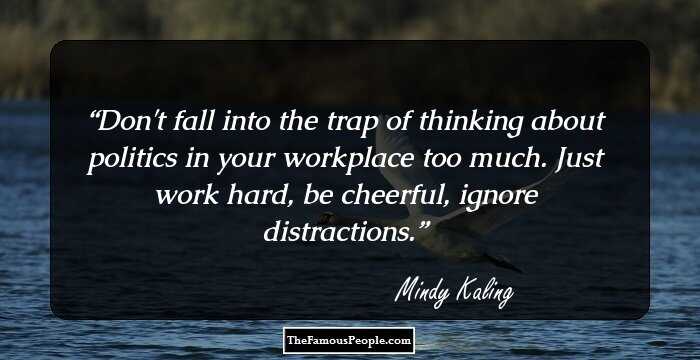 Don't fall into the trap of thinking about politics in your workplace too much. Just work hard, be cheerful, ignore distractions. 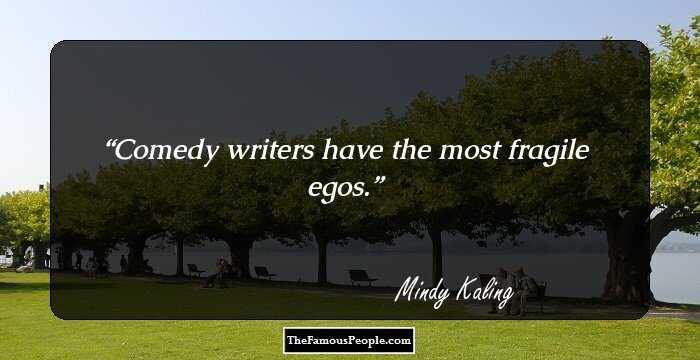 Comedy writers have the most fragile egos. 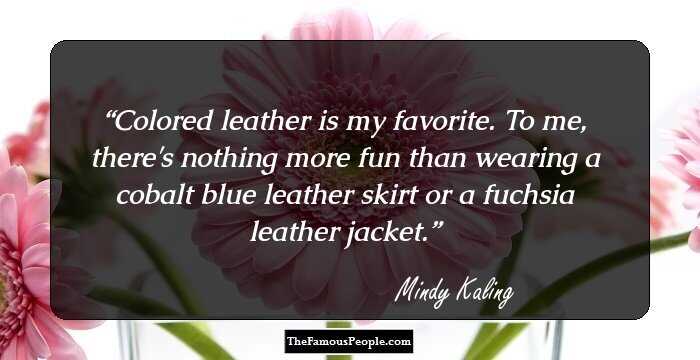 Colored leather is my favorite. To me, there's nothing more fun than wearing a cobalt blue leather skirt or a fuchsia leather jacket. 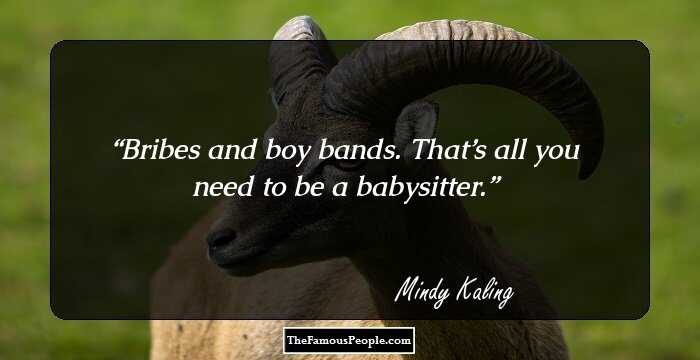 Bribes and boy bands. Thatâs all you need to be a babysitter. 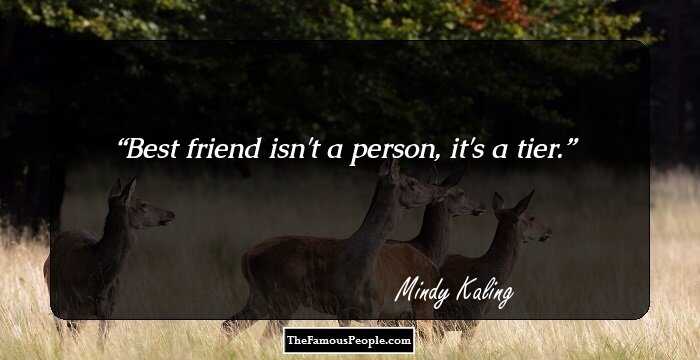 Best friend isn't a person, it's a tier. 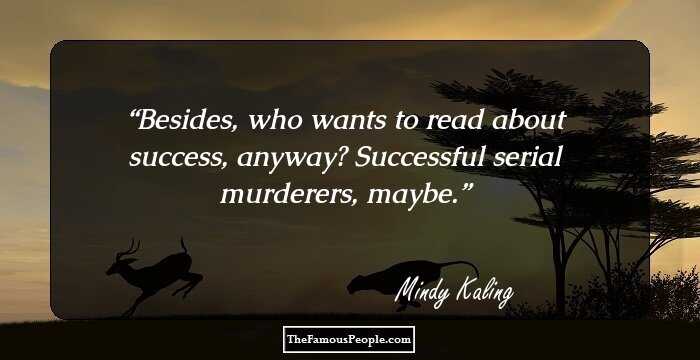 Besides, who wants to read about success, anyway? Successful serial murderers, maybe. 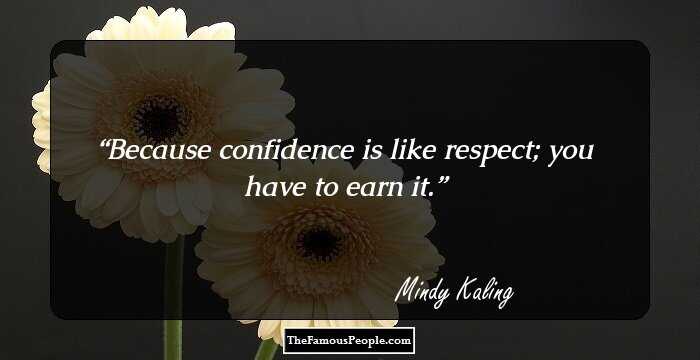 Because confidence is like respect; you have to earn it. 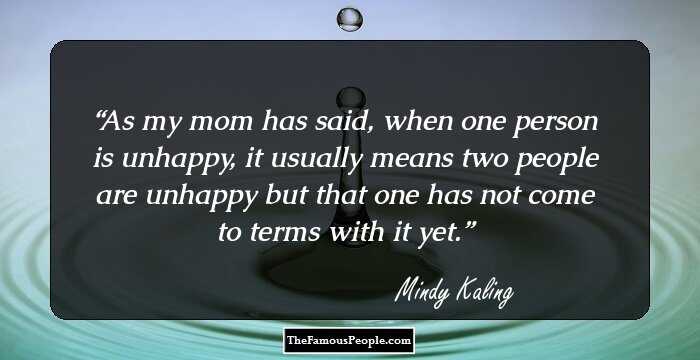 As my mom has said, when one person is unhappy, it usually means two people are unhappy but that one has not come to terms with it yet. 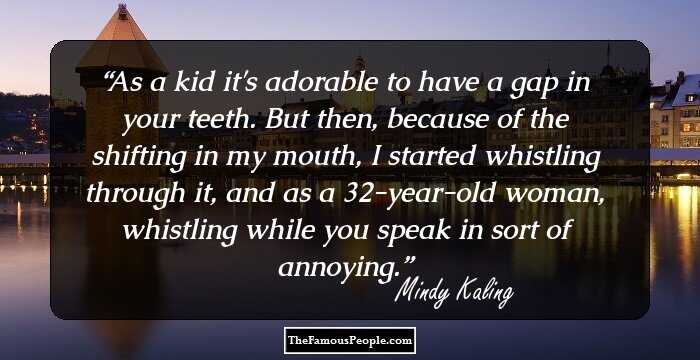 As a kid it's adorable to have a gap in your teeth. But then, because of the shifting in my mouth, I started whistling through it, and as a 32-year-old woman, whistling while you speak in sort of annoying. 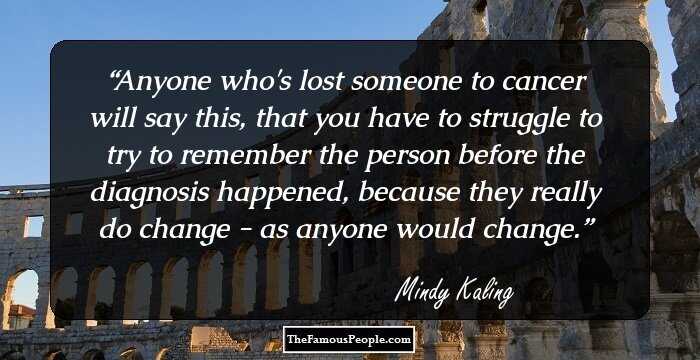 Anyone who's lost someone to cancer will say this, that you have to struggle to try to remember the person before the diagnosis happened, because they really do change - as anyone would change. 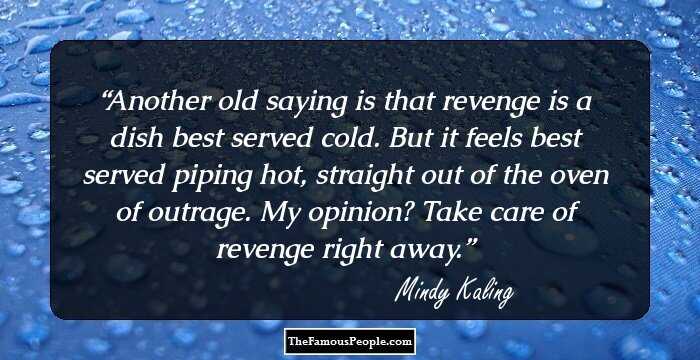 Another old saying is that revenge is a dish best served cold. But it feels best served piping hot, straight out of the oven of outrage. My opinion? Take care of revenge right away. 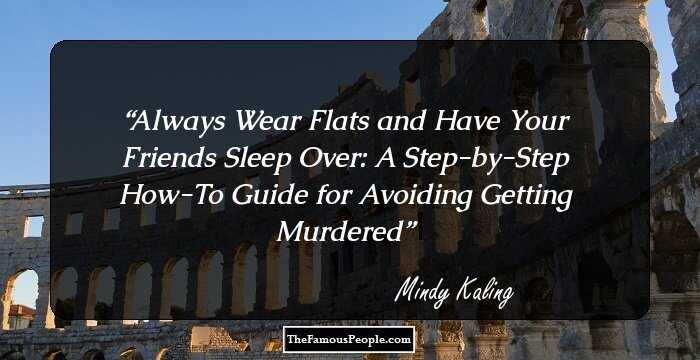 Always Wear Flats and Have Your Friends Sleep Over: A Step-by-Step How-To Guide for Avoiding Getting Murdered 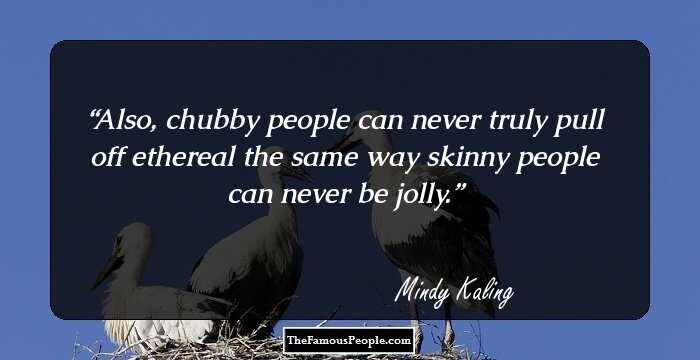 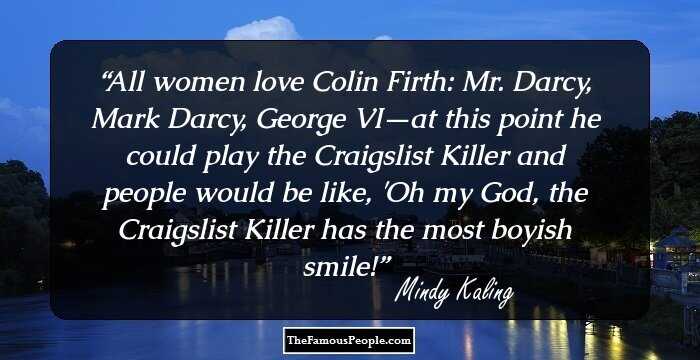 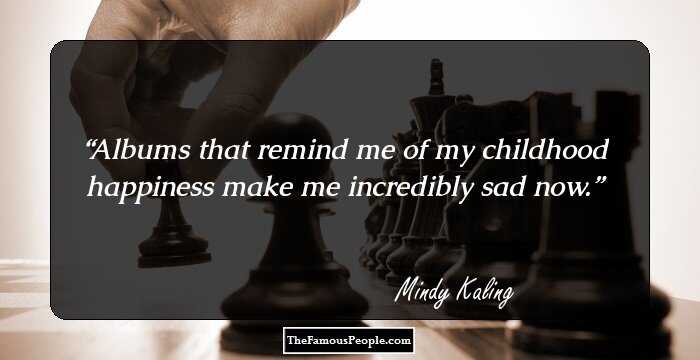 Albums that remind me of my childhood happiness make me incredibly sad now. 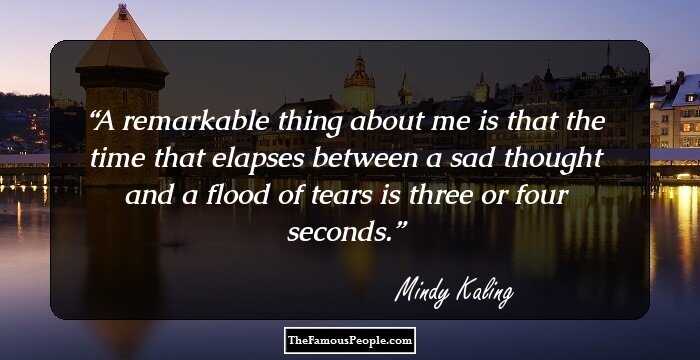 A remarkable thing about me is that the time that elapses between a sad thought and a flood of tears is three or four seconds.

All I want to do is be a gay icon. I was reading Lady Gaga's twitter, because she has like 12 million followers, or something like that. I feel like she has fans, gay, straight, bi, who would throw themselves off a building for her.

Almost every college playwright or sketch or improv comedian was sort of aware of Christopher Durang - even kids in high school. His short plays were so accessible to younger people and I think that was inspirational to me.

Anybody can have a birthday. It requires nothing. Murderers have birthdays. It's the opposite of anything that I believe in. And I don't like at work where you stop everything to sing 'Happy Birthday' to someone. I feel like that's for children.

As a kid, I always loved serialized books. Itâs the reason why people love Harry Potter. Serialization is amazing. It works in television. It works in film and it works in books. Especially when youâre a young kid, you get attached to these characters.

Catharsis isn't art. You can't rely on catharsis to get a laugh. Because guess what? People do laugh when something's shocking, but that is, to me, the absolute fakest of laughs. That's not something that sustains a television series, or a movie, or even 45 minutes of a stand-up set at Carolines.

Couples are really funny, because if they are together, they can fight and do fun things together. In Jane Austen books, marriage is the end of the story, but I actually think a really funny couple could be a fun thing to watch.