Famous As: Actor
Born On: December 19, 1980
Born In: Los Angeles, California, United States
Age: 41 Years
Jake Gyllenhaal is an American actor who began his acting career as a child with âCity Stickers.â His breakthrough performance came in 1999 in the role of Homer Hickman in âOctober Sky.â Some of his other noteworthy works include âThe Good Girl,â âA Dangerous Woman,â âDonnie Darko,â âThe Day After Tomorrow,â âProof,â âBrokeback Mountain,â and various others. He has received critical acclaim and has been nominated for a number of awards and accolades, including the âBAFTA Award,â âGolden Globe Award,â âScreen Actors Guild Award,â etc. Read through the collection of quotations by Jake Gyllenhaal.
Listed In:
Actors
Film & Theater Personalities 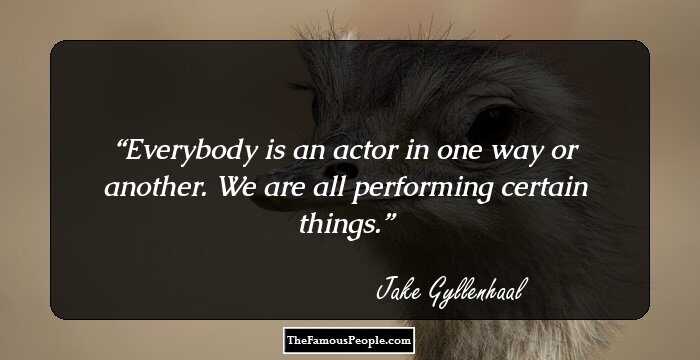 Everybody is an actor in one way or another. We are all performing certain things. 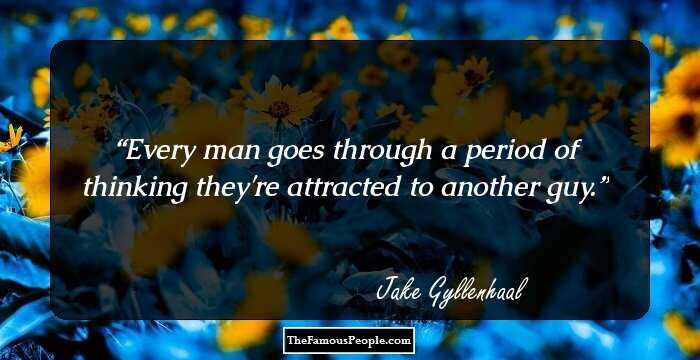 Every man goes through a period of thinking they're attracted to another guy. 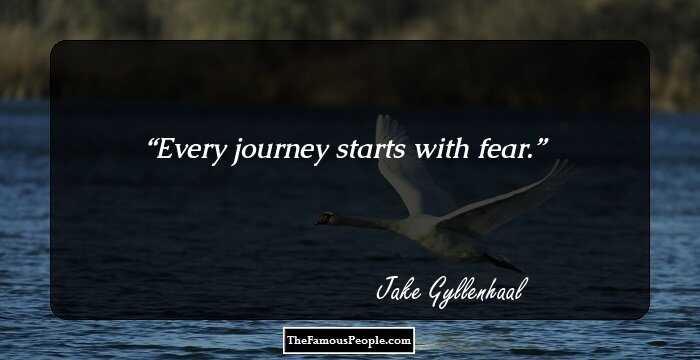 Every journey starts with fear. 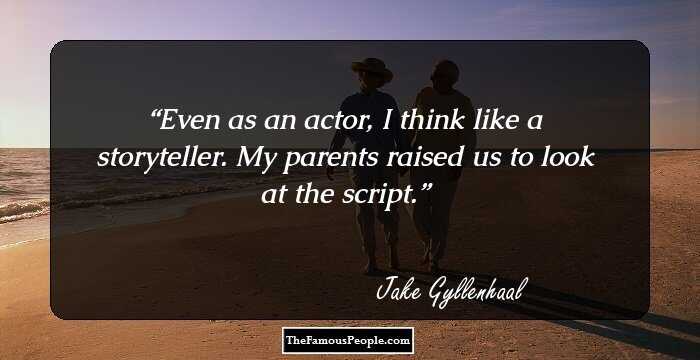 Even as an actor, I think like a storyteller. My parents raised us to look at the script. 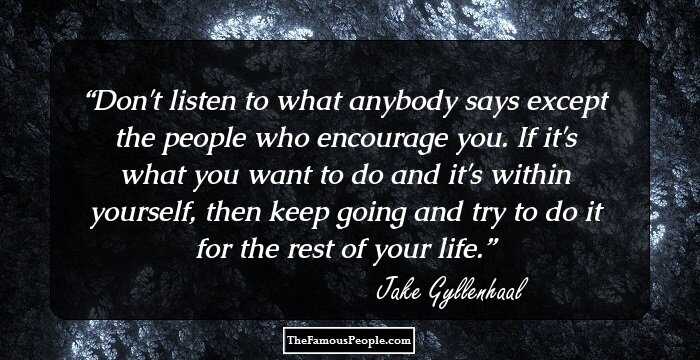 Don't listen to what anybody says except the people who encourage you. If it's what you want to do and it's within yourself, then keep going and try to do it for the rest of your life. 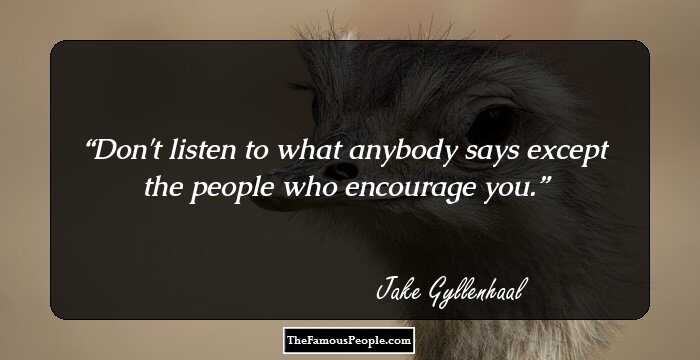 Don't listen to what anybody says except the people who encourage you. 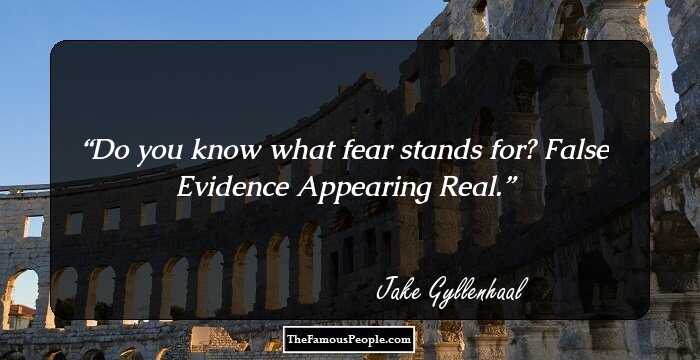 Do you know what fear stands for? False Evidence Appearing Real. 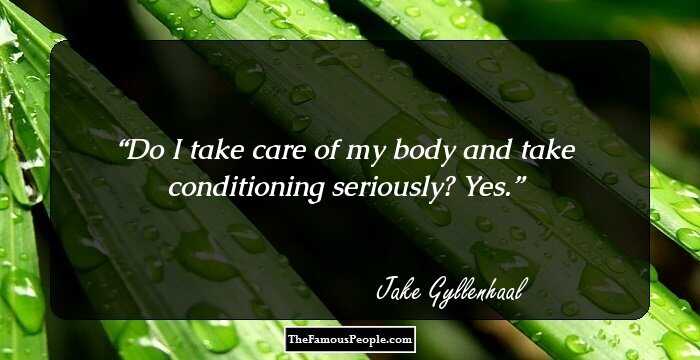 Do I take care of my body and take conditioning seriously? Yes. 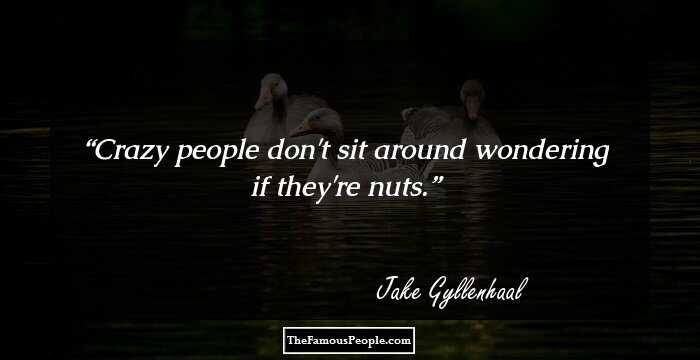 Crazy people don't sit around wondering if they're nuts. 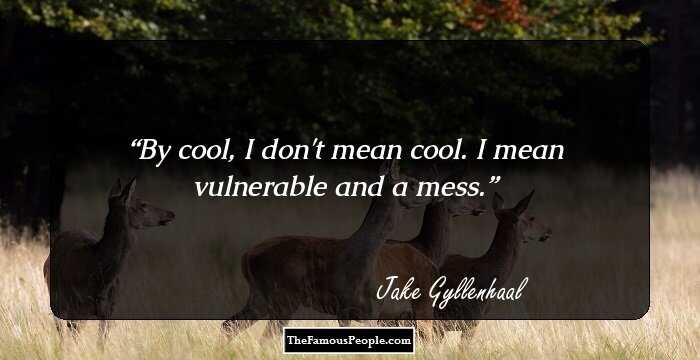 By cool, I don't mean cool. I mean vulnerable and a mess. 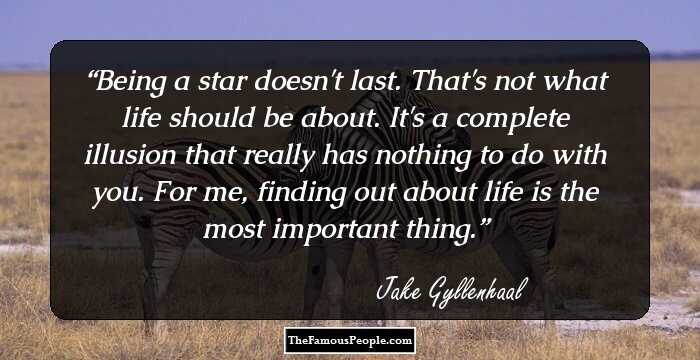 Being a star doesn't last. That's not what life should be about. It's a complete illusion that really has nothing to do with you. For me, finding out about life is the most important thing. 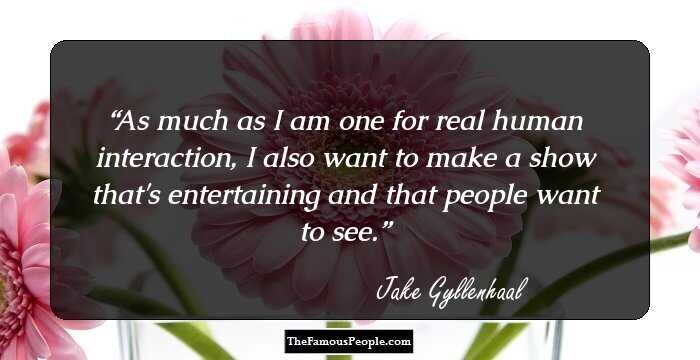 As much as I am one for real human interaction, I also want to make a show that's entertaining and that people want to see. 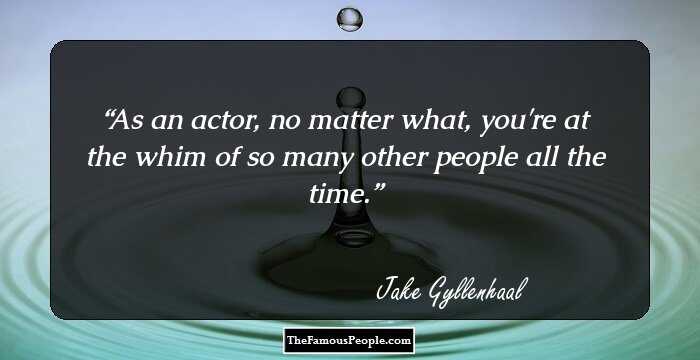 As an actor, no matter what, you're at the whim of so many other people all the time. 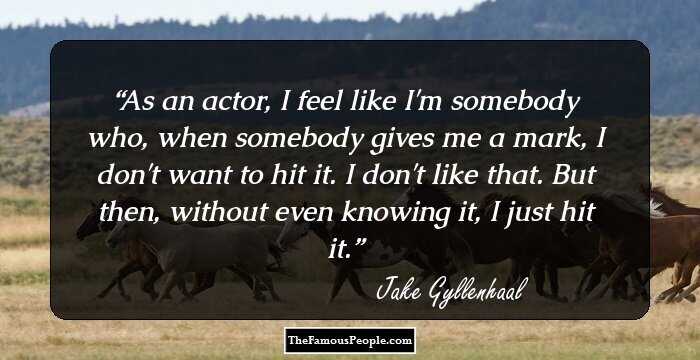 As an actor, I feel like I'm somebody who, when somebody gives me a mark, I don't want to hit it. I don't like that. But then, without even knowing it, I just hit it. 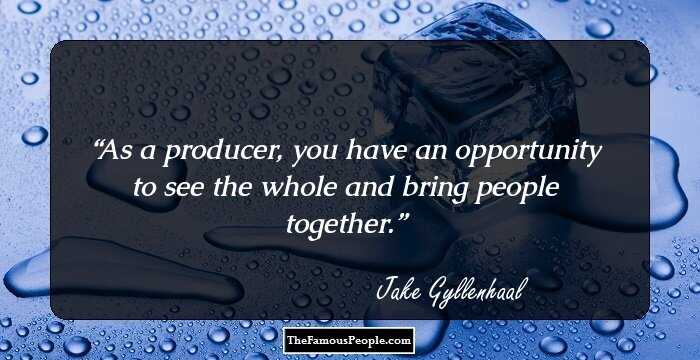 As a producer, you have an opportunity to see the whole and bring people together. 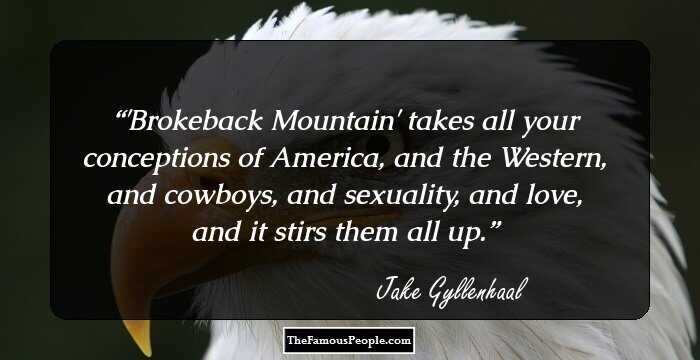 'Brokeback Mountain' takes all your conceptions of America, and the Western, and cowboys, and sexuality, and love, and it stirs them all up.

A Separation is another film that I think is extraordinary, and one of those things that feels like it's from another planet, much like Terrence Malick's movies did: at a certain point, you feel like he's an alien from another planet telling us and looking at us and showing us how we are. I also really, really love Jerry McGuire.

Ang [Lee] gave us a lot of books about cowboys who had been gay or stories about it and all that stuff. And I just talked to a lot of my friends - who [was] their first, particularly same-sex, first situation. That was fascinating to me - trying to learn what that was in a certain period of time. Certain age. The secrecy involved in it. All those things.

As a producer, it starts when I talk about privacy and silence. It starts before anybody believes in it. And I think that's, you have to have a real sense of self, and in order to push things through. And so often, what's interesting, is how many people dismiss an idea that eventually everybody [gloms] onto. So to me it's, that's what I mean by hard.

Being the youngest, I constantly have that insecurity of being the youngest, which ultimately is probably my drive. in a lot of ways. In terms of as an artist, the way we could communicate as a family very clearly was through movies and through acting, and when things became complicated with all of our own personalities, that's where we are most clear. I think that's also where we are most brutal with each other as well.

But you need to strive to try and communicate and try and change things in a similar way. And then people can think that's pretentious or whatever, but it's your life's work, and you've decided that. That's what they made us believe. So we have a pretty high standard, which is at times great and at times not.

Dad, I may not be the best, but I come to believe that I got it in me to be somebody in this world. And it's not because I'm so different from you either. It's because I'm the same. I mean, I can be just as hard-headed, and just as tough. I only hope I can be as good a man as you.