Famous As: Scottish Actor and Film Producer
Born On: November 13, 1969
Born In: Paisley, Renfrewshire, Scotland
Age: 53 Years
Gerard Butler is a celebrated Scottish singer, actor, and producer who started his career with minor roles. He gained global recognition in 2007 with â300,â an epic war film. Some of his other well-known works include âThe Phantom of the Opera,â âAttila,â âTale of the Mummy,â âGift of the Night Fury,â âMachine Gun Preacher.â He has been nominated for various awards and accolades, including âPeopleâs Choice Award,â âTeen Choice Award,â âEmpire Awards,â âSaturn Awardsâ and âSatellite Awards.â Take a look at the compilation of popular quotations and thoughts by Gerard Butler.
Listed In:
Actors
Film & Theater Personalities 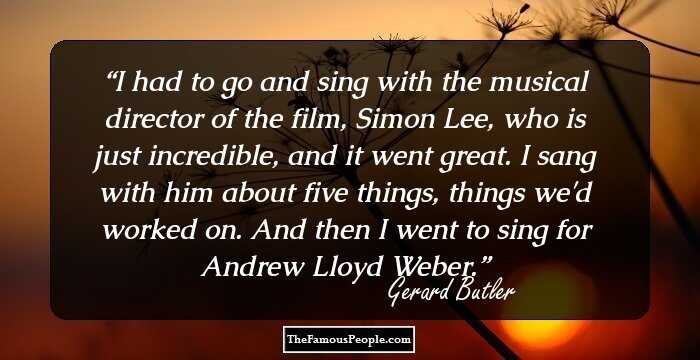 I had to go and sing with the musical director of the film, Simon Lee, who is just incredible, and it went great. I sang with him about five things, things we'd worked on. And then I went to sing for Andrew Lloyd Weber. 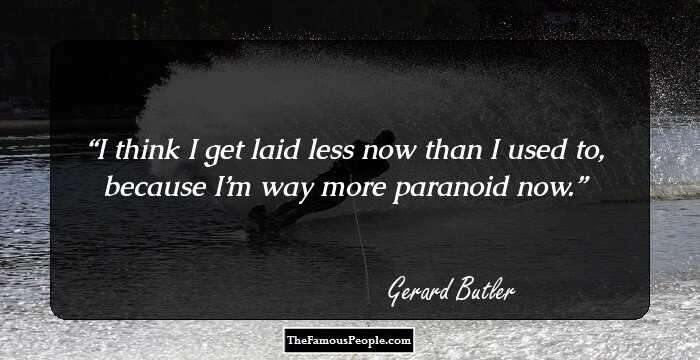 I think I get laid less now than I used to, because Iâm way more paranoid now. 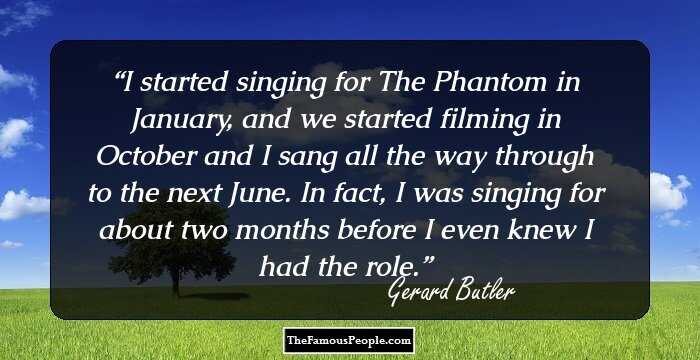 I started singing for The Phantom in January, and we started filming in October and I sang all the way through to the next June. In fact, I was singing for about two months before I even knew I had the role. 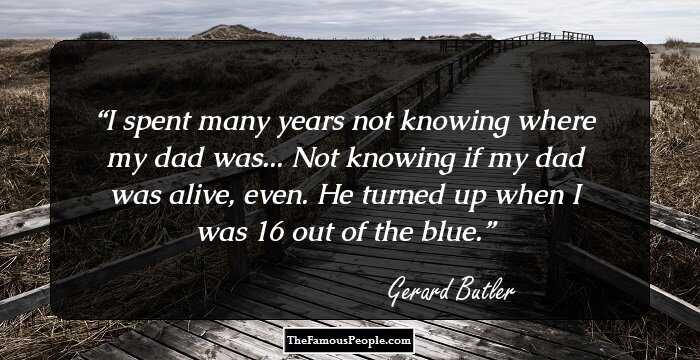 I spent many years not knowing where my dad was... Not knowing if my dad was alive, even. He turned up when I was 16 out of the blue. 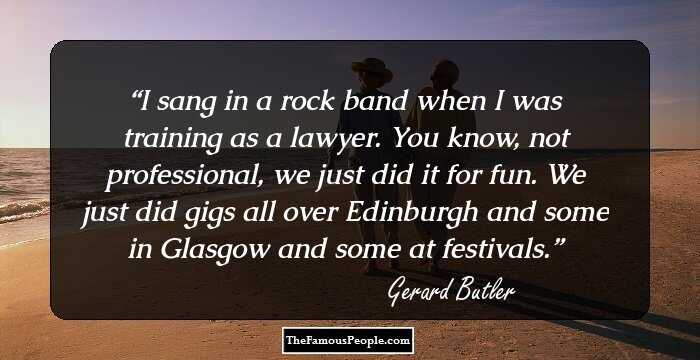 I sang in a rock band when I was training as a lawyer. You know, not professional, we just did it for fun. We just did gigs all over Edinburgh and some in Glasgow and some at festivals. 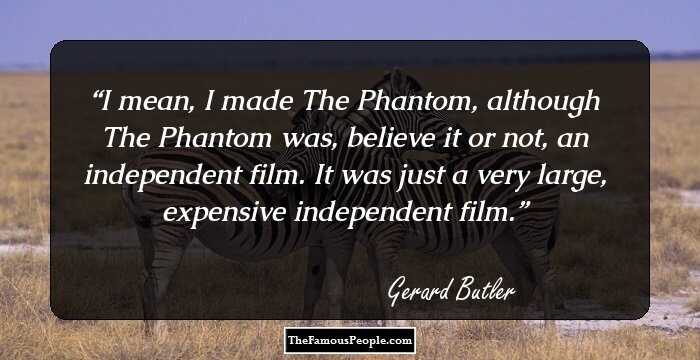 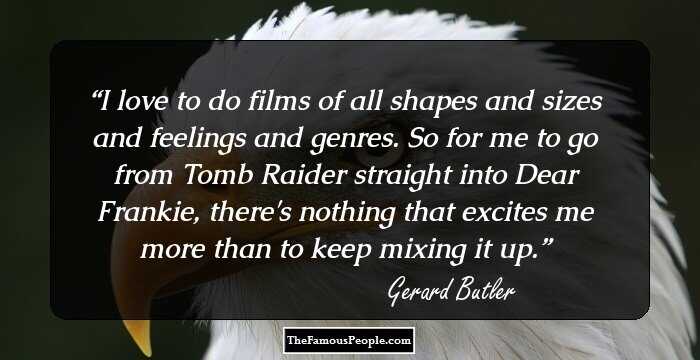 I love to do films of all shapes and sizes and feelings and genres. So for me to go from Tomb Raider straight into Dear Frankie, there's nothing that excites me more than to keep mixing it up. 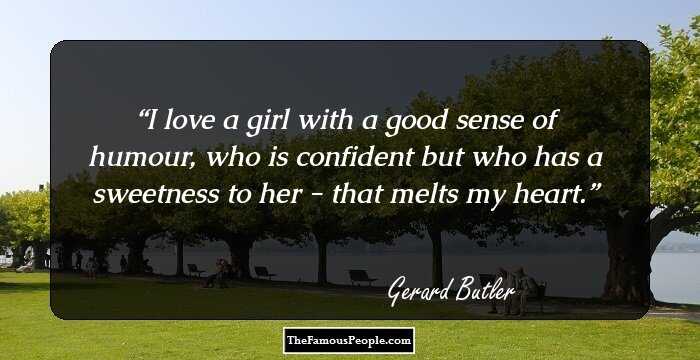 I love a girl with a good sense of humour, who is confident but who has a sweetness to her - that melts my heart. 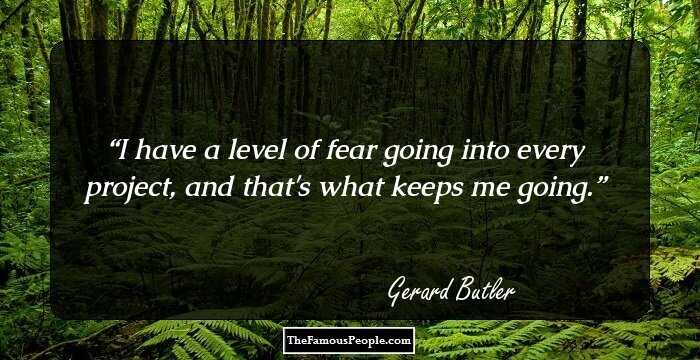 I have a level of fear going into every project, and that's what keeps me going. 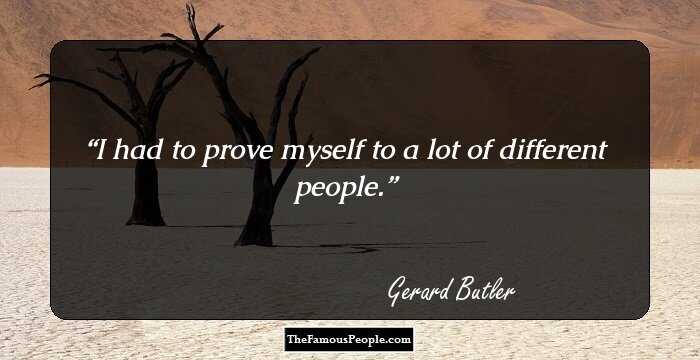 I had to prove myself to a lot of different people. 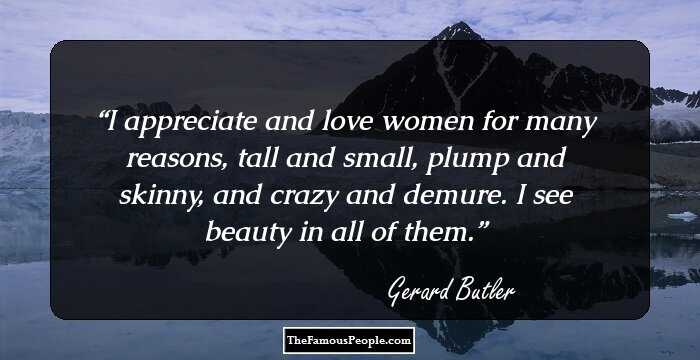 I appreciate and love women for many reasons, tall and small, plump and skinny, and crazy and demure. I see beauty in all of them. 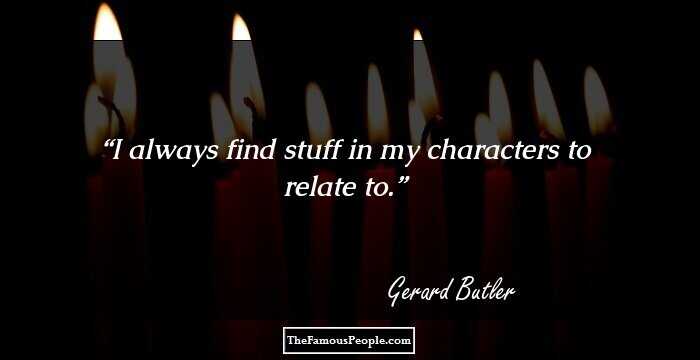 I always find stuff in my characters to relate to. 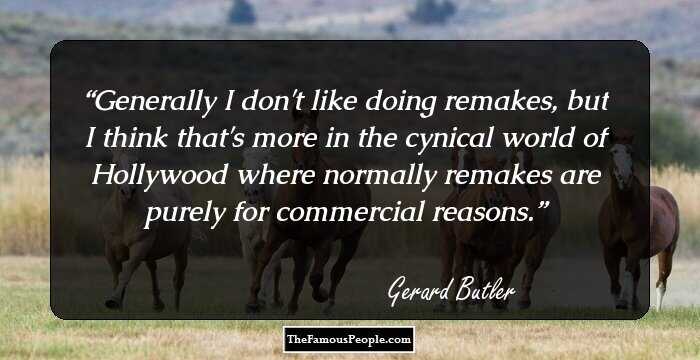 Generally I don't like doing remakes, but I think that's more in the cynical world of Hollywood where normally remakes are purely for commercial reasons. 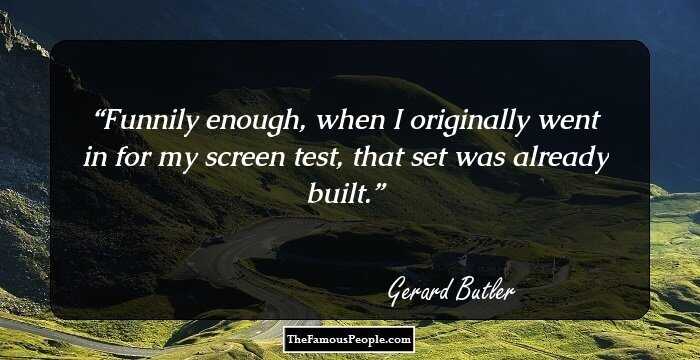 Funnily enough, when I originally went in for my screen test, that set was already built. 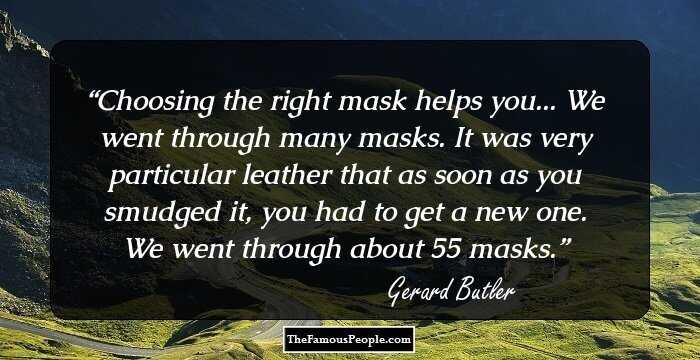 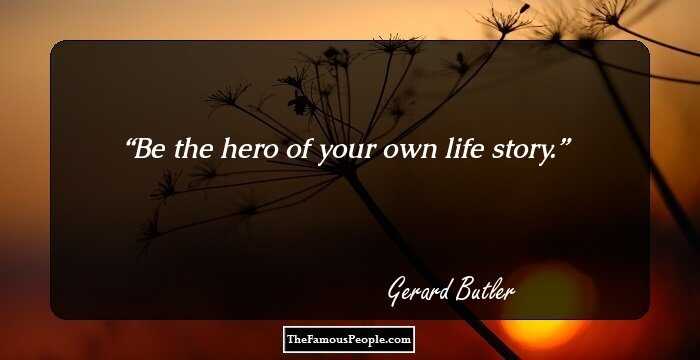 Be the hero of your own life story. 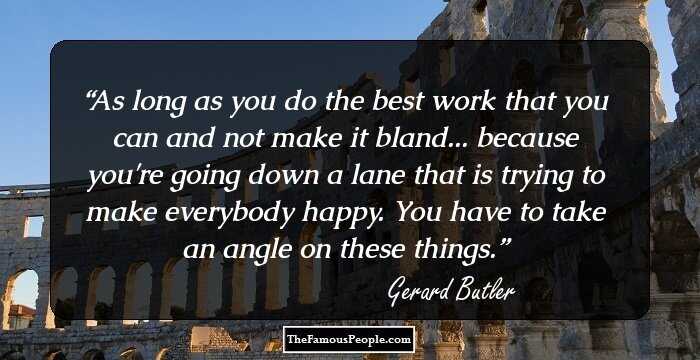 As long as you do the best work that you can and not make it bland... because you're going down a lane that is trying to make everybody happy. You have to take an angle on these things.

At first it was a bit strange and daunting to have to wear a mask, but afterwards I came to enjoy it. In warm conditions, though, it started to slip off my face. Other times they used this double-sided sticky tape, and I literally couldn't get it off my face. I would feel like I was ripping my face off and I had a lot of cuts and bruises because of it-huge red marks. People might think it was method acting.

Comedy is actually very hard. It's hard to choose those moments and know when you can really push it, and know when you should be bringing it back and making it more subtle, and knowing as time goes on, as you do take after take and the crowd around you stops laughing. Whenever you do comedy, you realize you're up against - you're performing next to people who you would think are so unbelievably good at it, that that's a bit of a pressure. But at the same time, it's just fun. It's fun to be able to let out that side of you.

I do get stressed at times, but I love what I do as an actor. This is the part that I don't like. I don't actually like talking about - I wish I could just go and get on with my job, because I love getting a script, breaking it down, working with other people, bonding with other people, fighting with other people, and out of those arguments, creating something that nobody expected and seeing it all come together. Telling a story, having an impact on people's lives, moving them and making them laugh.

I don't know whether it's spiritual development or trying to learn the psychologically with being an actor, but I realise the more I get into it that this was something I was always supposed to do. That allowed me to sit easiser in the life I was living. But that doesn't mean to say you just stroll through it. It takes work and the work is not always about acting. It's sometimes about how you deal with the ups and downs of hope, of expectation.

I felt that let's understand that all these people are just human, even the advisors in the White House, they're just real people trying to make real decisions and they make mistakes like anybody else does under pressure. If you can get that with these great performances then you claim it on that level as well.

I had to get used to wearing a mask and wearing a prosthetic and performing with those things while singing and expressing myself through stylized movement, while keeping it as human as possible so the audience could be closer to the horror of the Phantom.

I know I have within myself... a side of solitude. I think people who know me can see, but people who just meet me can't because I'm generally very fun and gregarious. I love to spend a lot of time on my own. I can seriously go into my own head and often love to let myself travel where I don't know where I'm going. I always felt that that was his kind of form of escape, in a way.

I think it's one of the nicest privileges as an actor is to know that you can move people in one moment, make them think about their lives, or make them laugh or make them cry or make them understand something. Or just make them feel something because I think so many of us, including myself, spend too much time not feeling enough, you know?