Christopher Nolan is an eminent British-American filmmaker. He is renowned for making distinctive and personal films within the Hollywood mainstream. His directorial efforts have garnered a total of ten wins of thirty-four âAcademyâ nominations and have grossed more than US $4.7 billion across the globe. âFollowing,â a British neo-noir crime thriller film, marked his acting debut. He gained global recognition for his performance in âMemento.â Some of his other notable works include âDunkirk,â âInception,â âThe Dark Knight trilogy,â âInsomnia,â âPrestige,â âInterstellar,â and more. Here is a collection of famous sayings by Christopher Nolan on risk, dream, learning, mistakes, character, time, culture, mind, power, technology, future, etc. 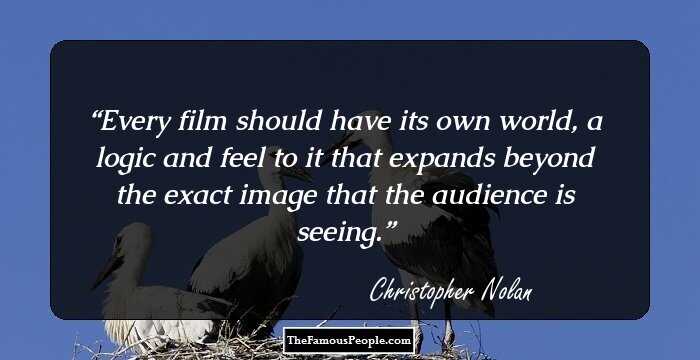 Every film should have its own world, a logic and feel to it that expands beyond the exact image that the audience is seeing. 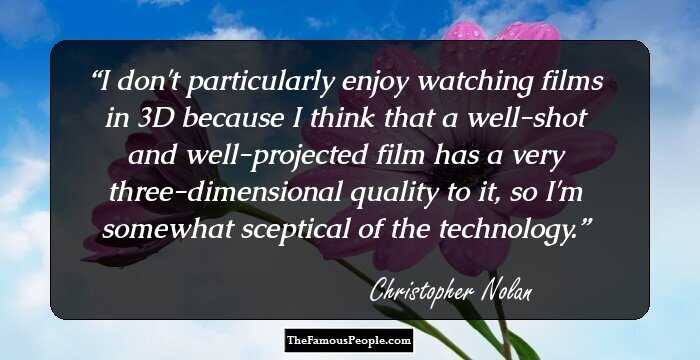 I don't particularly enjoy watching films in 3D because I think that a well-shot and well-projected film has a very three-dimensional quality to it, so I'm somewhat sceptical of the technology. 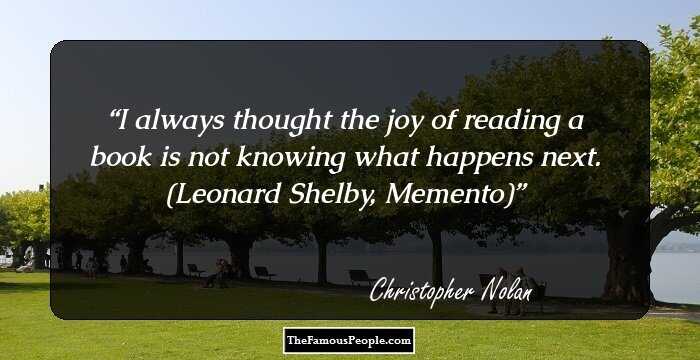 I always thought the joy of reading a book is not knowing what happens next. (Leonard Shelby, Memento) 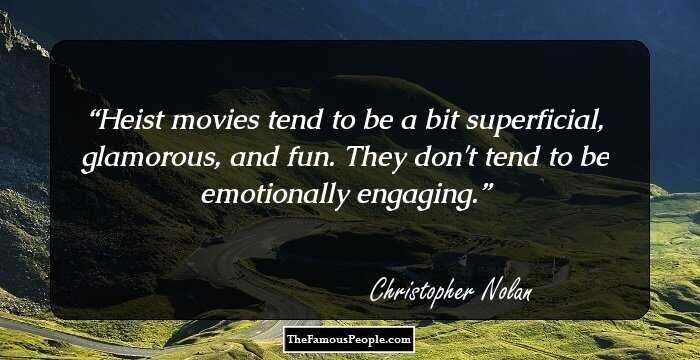 Heist movies tend to be a bit superficial, glamorous, and fun. They don't tend to be emotionally engaging. 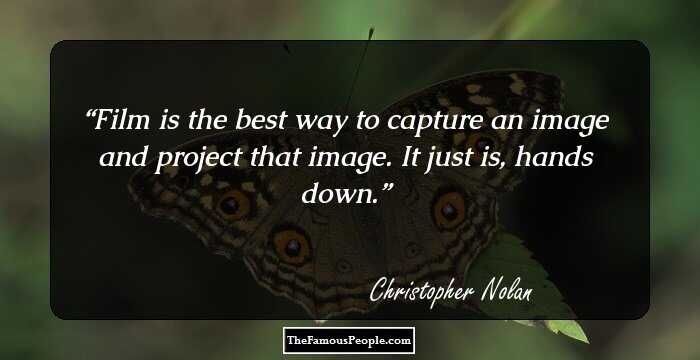 Film is the best way to capture an image and project that image. It just is, hands down. 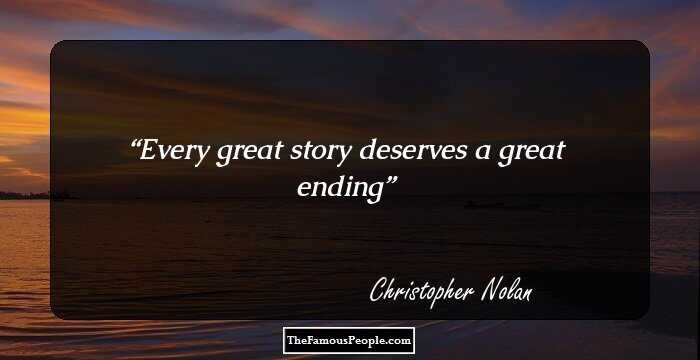 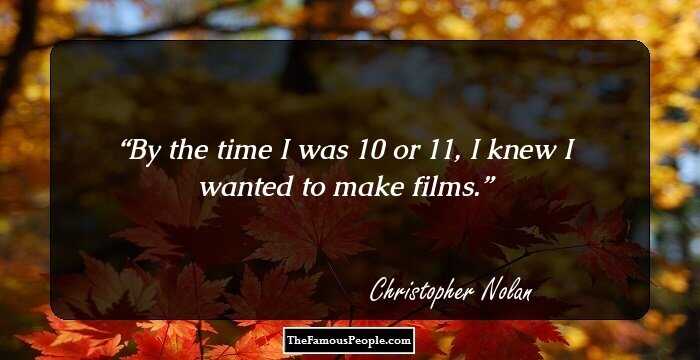 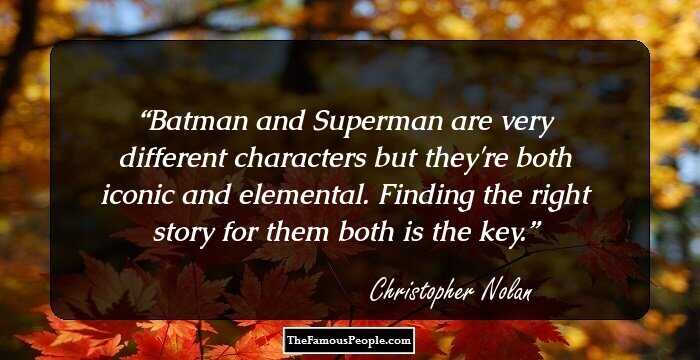 Batman and Superman are very different characters but they're both iconic and elemental. Finding the right story for them both is the key. 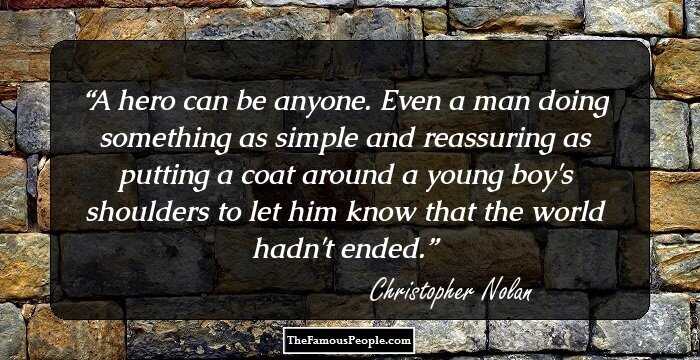 A hero can be anyone. Even a man doing something as simple and reassuring as putting a coat around a young boy's shoulders to let him know that the world hadn't ended. 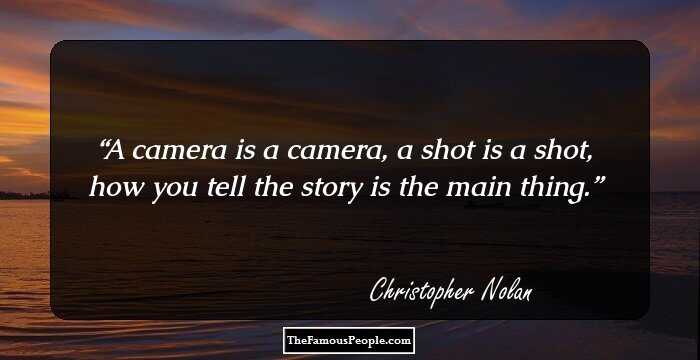 A camera is a camera, a shot is a shot, how you tell the story is the main thing.

As far as the dreams go, really I would only point to there are times in my life where I experienced lucid dreaming, which is a big feature of Inception - the idea of realizing you're in a dream and therefore trying to change or manipulate it in some way. That's a very striking experience for people who have it.

As soon as television became the only secondary way in which films were watched, films had to adhere to a pretty linear system, whereby you can drift off for ten minutes and go and answer the phone and not really lose your place.

But, in each case, as a filmmaker who's been given sizable budgets with which to work, I feel a responsibility to the audience to be shooting with the absolute highest quality technology that I can and make the film in a way that I want.

Chris [ Nolan] and I have a strange way of working from the non-movie process, where after all these conversations and reading the script and more conversations, Chris went out and shot the films and the first thing he did, he wouldn't show it to me until I had written the music - not out of meanness, or anything, it just sort of seemed an interesting idea to see if there was some synchronicity and letting me use my imagination to the fullest instead of being constricted by cuts and images.

Don't talk like one of them. You're not! Even if you'd like to be. To them, you're just a freak, like me! They need you right now, but when they don't, they'll cast you out, like a leper! You see, their morals, their code, it's a bad joke. Dropped at the first sign of trouble. They're only as good as the world allows them to be. I'll show you. When the chips are down, these... these civilized people, they'll eat each other. See, I'm not a monster. I'm just ahead of the curve. -The Joker

Films are subjective - what you like, what you don't like. But the thing for me that is absolutely unifying is the idea that every time I go to the cinema and pay my money and sit down and watch a film go up on-screen, I want to feel that the people who made that film think it's the best movie in the world, that they poured everything into it and they really love it. Whether or not I agree with what they've done, I want that effort there - I want that sincerity. And when you don't feel it, that's the only time I feel like I'm wasting my time at the movies.

For me, as a film goer, I like nothing more than to sit in the cinema, have the lights go down and not know what I'm about to see or unfold on-screen. Every time we go to make a film, we do everything we can to try to systematise things so we're able to make the film in private, so that when it's finished it's up to the audience to make of it what they will.

For me, Batman is the one that can most clearly be taken seriously. He's not from another planet, or filled with radioactive gunk. I mean, Superman is essentially a god, but Batman is more like Hercules: he's a human being, very flawed, and bridges the divide.

George Lazenby is no one's favorite James Bond, but for me the anonymity at the center of this lavish production only serves to reveal the Bond machine firing on all cylinders: superb editing and photography, incredible score, great setpieces. The most romantic in the series, and it actually has, of all things, a tragic ending.

I always find myself gravitating to the analogy of a maze. Think of film noir and if you picture the story as a maze, you don't want to be hanging above the maze watching the characters make the wrong choices because it's frustrating. You actually want to be in the maze with them, making the turns at their side, that keeps it more exciting...I quite like to be in that maze.

I believe movies are one of the great American art forms and the shared experience of watching a story unfold on screen is an important and joyful pastime. The movie theatre is my home, and the idea that someone would violate that innocent and hopeful place in such an unbearably savage way is devastating to me.

I don't actually tend to do a lot of research when I'm writing. I do know because I think a lot of what I find you want to do with research is just confirming things you want to do. If the research contradicts what you want to do, you tend to go ahead and do it anyway.

I don't ever like to feel myself in the position to demand of an actor that they trust I'm going to do something worthwhile. I feel a responsibility to articulate what it is I'm going to do. Whether that's showing them a full script or sitting down with them and describing my ideas in detail. It's a very healthy burden on me as a film director to be able to articulate what I want to do, to inspire actors, rather than just saying, take it on trust I'll be able to do something worthwhile.

I have always been a big fan of the character and am more of a moviegoer than a comic book guy, there is always something about the character of Batman that is very elemental. There is a great powerful myth to the character and romantic element that draws from a lot of literary sources

I have always been a huge fan of Ridley Scott and certainly when I was a kid. 'Alien,' 'Blade Runner' just blew me away because they created these extraordinary worlds that were just completely immersive. I was also an enormous Stanley Kubrick fan for similar reasons.