A collection of quotes, one-liners and sayings by Bruce Campbell on Hollywood, role, horror, character, business, comedy, audience, and classic. 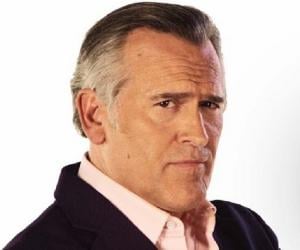 Famous As: American actor
Born On: June 22, 1958
Born In: Royal Oak
Age: 63 Years
Bruce Campbell is a celebrated American comedian, actor, writer, director, and producer. He is renowned for his portrayal in âEvil Deadâ franchise as 'Ash Williams.' He began his career in 1978 with a short film titled, âWithin the Woods.â He has appeared in a number of low-budget cult films including, âBubba Ho-Tep,â âManiac Cop,â âCrimewave,â and âSundown: The Vampire in Retreatâ amongst various others. As far as his television career is considered, he has played the lead in âJack of All the Trades,â and âThe Adventures of Brisco Country, Jr.â We have gathered a number of sayings and quotes by Bruce Campbell which have been collected from his writings, thoughts, movies, dialogues, interviews, utterances, works, and life. Here is a collection of noteworthy quotes and thoughts by Bruce Campbell.
Listed In:
Actors
Film & Theater Personalities 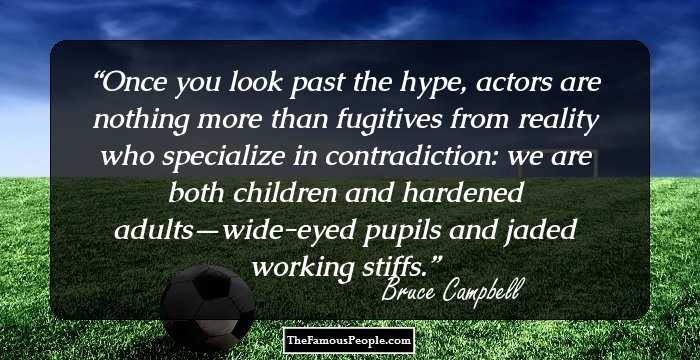 Once you look past the hype, actors are nothing more than fugitives from reality who specialize in contradiction: we are both children and hardened adults—wide-eyed pupils and jaded working stiffs.

You Past Children
Bruce Campbell 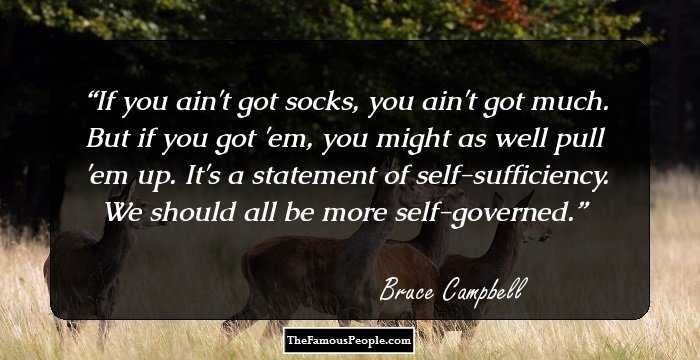 If you ain't got socks, you ain't got much. But if you got 'em, you might as well pull 'em up. It's a statement of self-sufficiency. We should all be more self-governed. 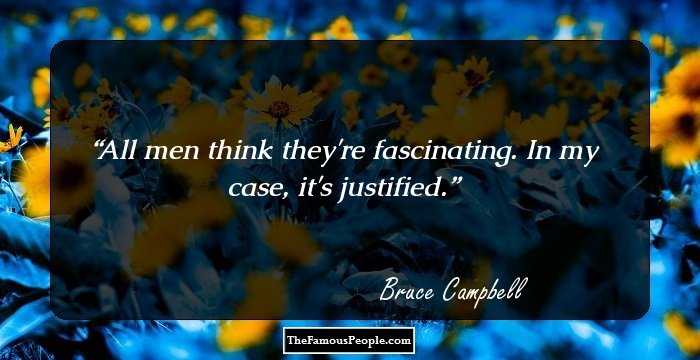 All men think they're fascinating. In my case, it's justified. 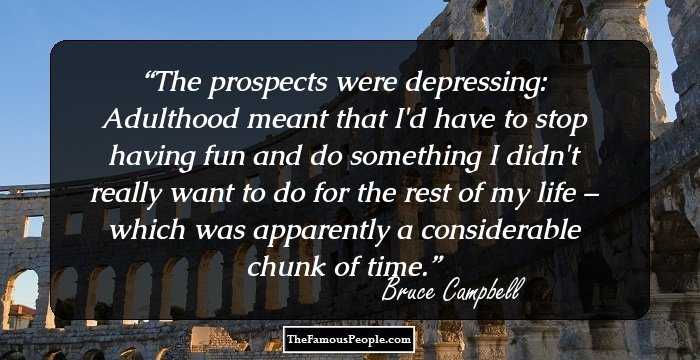 The prospects were depressing: Adulthood meant that I'd have to stop having fun and do something I didn't really want to do for the rest of my life – which was apparently a considerable chunk of time. 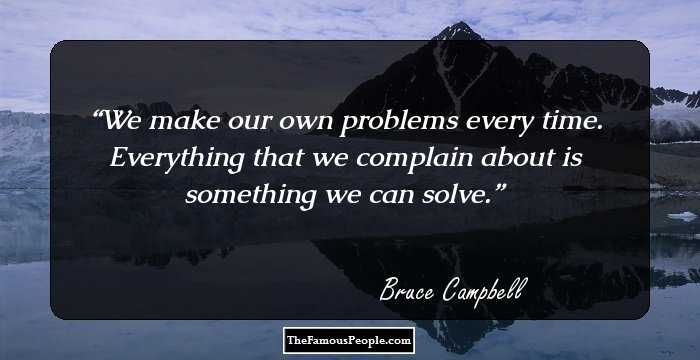 We make our own problems every time. Everything that we complain about is something we can solve. 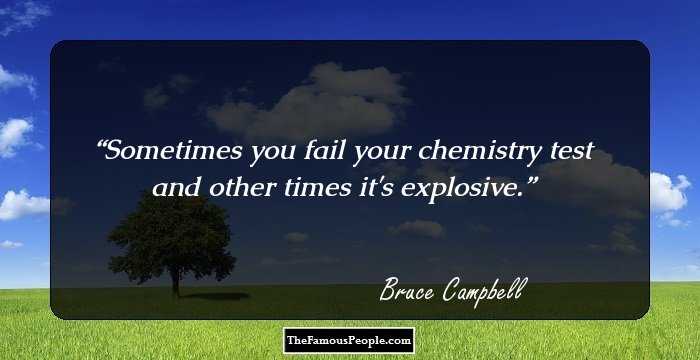 Sometimes you fail your chemistry test and other times it's explosive.

Only comedies can get you that engaged in a movie, dramas people just sort of sit there and eat their popcorn and nothing really happens, they might cry a little bit, but that's it. Horror movies are talking at the screen, guys are elbowing each other, laughing at each other because they got scared. That's the beauty of a horror movie. 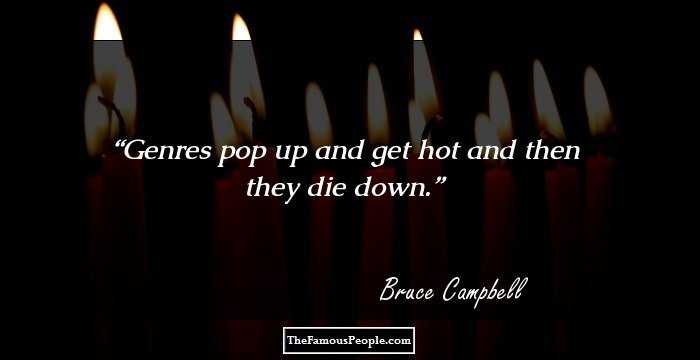 Genres pop up and get hot and then they die down.

The Way I See It: If you're worried about getting a job-or keeping one-start a company of your own. By doing so, you'll reap the rewards of your hard work and you'll only get fired if you fail. This is the land of opportunity. Live in it. 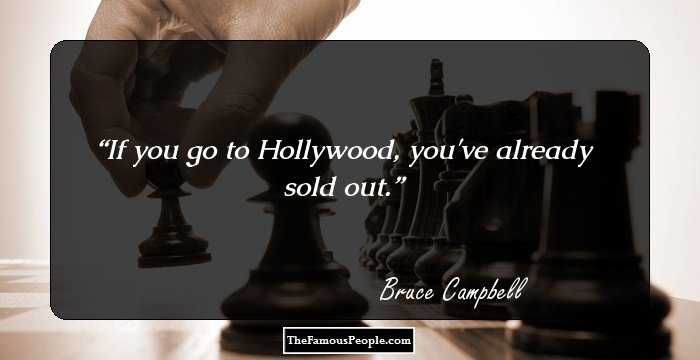 If you go to Hollywood, you've already sold out. 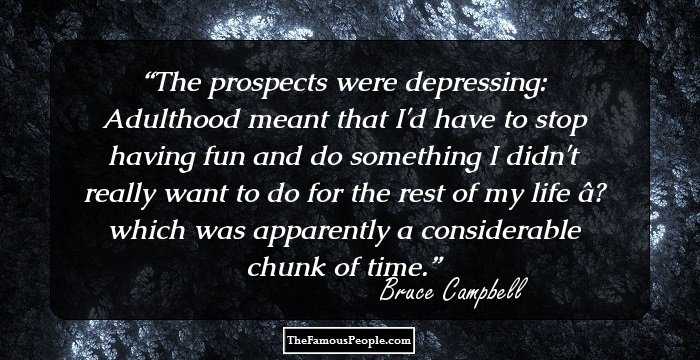 The prospects were depressing: Adulthood meant that I'd have to stop having fun and do something I didn't really want to do for the rest of my life â which was apparently a considerable chunk of time. 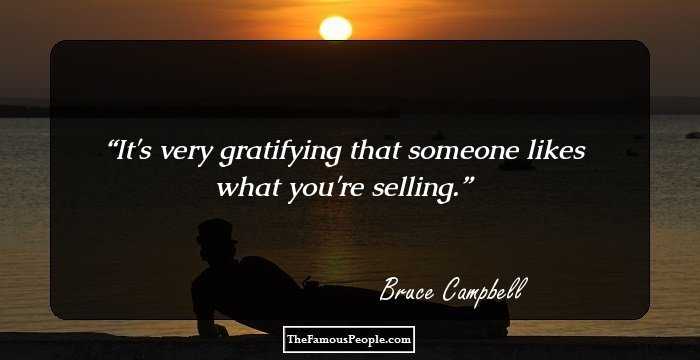 It's very gratifying that someone likes what you're selling. 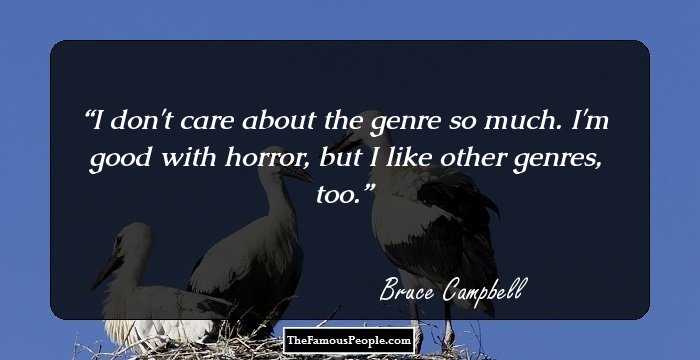 I don't care about the genre so much. I'm good with horror, but I like other genres, too. 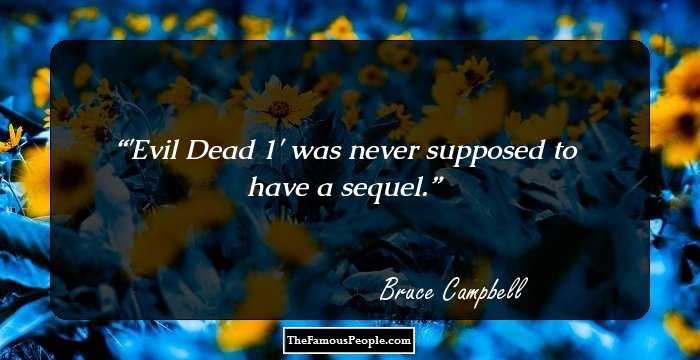 'Evil Dead 1' was never supposed to have a sequel. 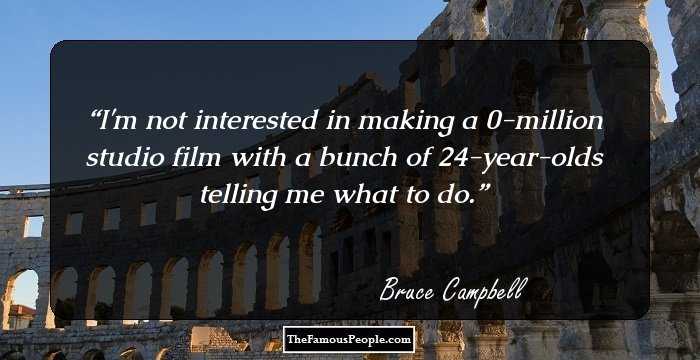 I'm not interested in making a $60-million studio film with a bunch of 24-year-olds telling me what to do. 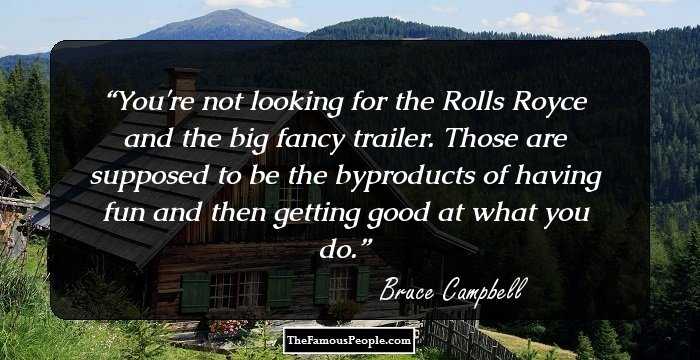 You're not looking for the Rolls Royce and the big fancy trailer. Those are supposed to be the byproducts of having fun and then getting good at what you do. 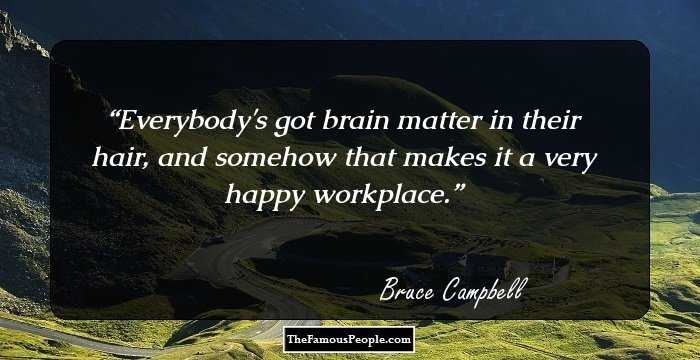 Everybody's got brain matter in their hair, and somehow that makes it a very happy workplace.

Funny stories on set - there are thousands of them, but they are only funny to the people who were on the movies. You start to have inside jokes and gallows humor. You have all kinds of things you laugh at, but as soon as you tell somebody, the joke falls flat because they don't know the context of it.

Producers might cast an actor because he is too tall next to the leading lady, who is too short, or they might not cast your guy because he's blond, and they wanted a brunette. There's all kinds of reasons why they want one person over another. I don't worry about it, but it can hurt sometimes if you really wanted something, if you really went after something.

I think none of the humor in the first Evil Dead was intentional. We weren't that sophisticated. We got more sophisticated with Evil Dead 2 and Army of Darkness where you can start to manipulate the audience a little more, having more control over the medium instead of just trying to figure out how to do it. I suppose that's pretty normal with any craft. Every carpenter is better 20 years later.

You can't show up on set and expect it all to come together. You have to have a plan, much like how the director can't just show up and go, well, where should I put the camera? That is gonna determine how it is lit, you should have already been in the room looking at it earlier, pre-lit the room, you know there is a lot of prep that goes into it, so it is the same thing with acting. You can't just show up.

The happy medium is television. And if you find a good suitor, you can do it for years. With movies, you roll the dice. If people don't show that weekend, you're doomed. TV allows you to percolate a little bit, and it gives you a chance for people to find it.