Billy Crudup is a celebrated American actor. He earned a âTony Awardâ for his performance in âThe Coast of Utopia.â He won two âScreen Actors Guild Awardâ nominations and was also nominated for âIndependent Spirit Awardâ for his role in âJesusâ Son.â He bagged in a âCriticsâ Choice Television Award,â and a âPrimetime Emmy Awardâ for his performance in âThe Morning Show.â Take a look at the famous quotes by Billy Crudup, which have been gathered from his movies, tweets, dialogues, and interviews. Here is a list of Billy Crudup sayings on joy, ability, people, acting, character, insecurity, truth, opportunity, opinion, attitude, kind, philosophy, challenges, expectations, heart, etc. 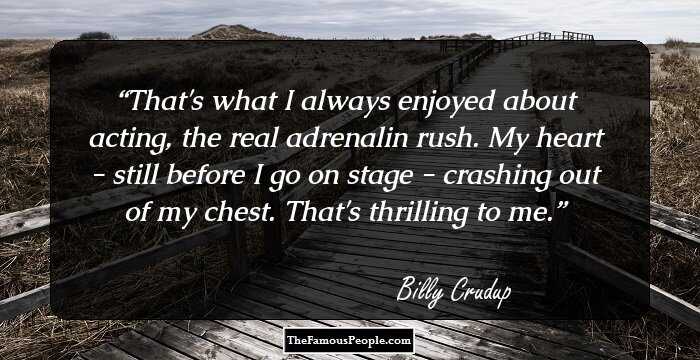 That's what I always enjoyed about acting, the real adrenalin rush. My heart - still before I go on stage - crashing out of my chest. That's thrilling to me. 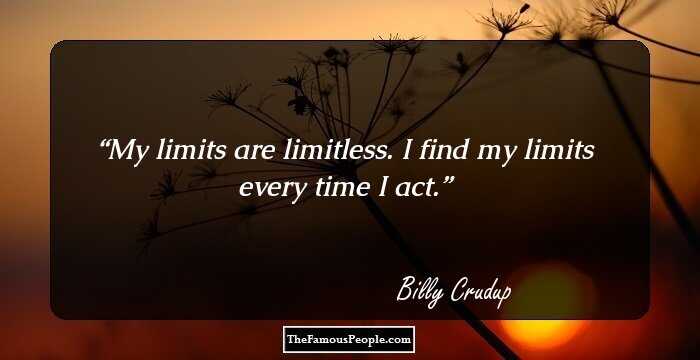 My limits are limitless. I find my limits every time I act. 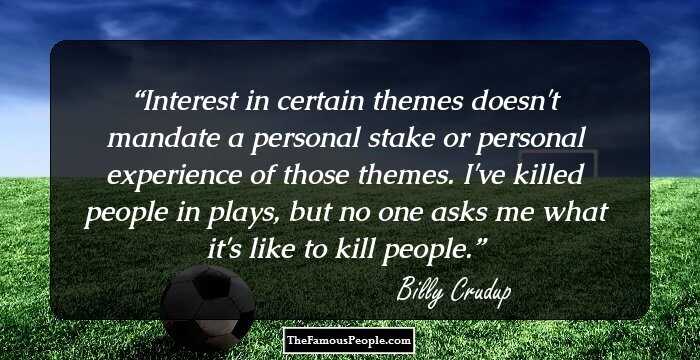 Interest in certain themes doesn't mandate a personal stake or personal experience of those themes. I've killed people in plays, but no one asks me what it's like to kill people. 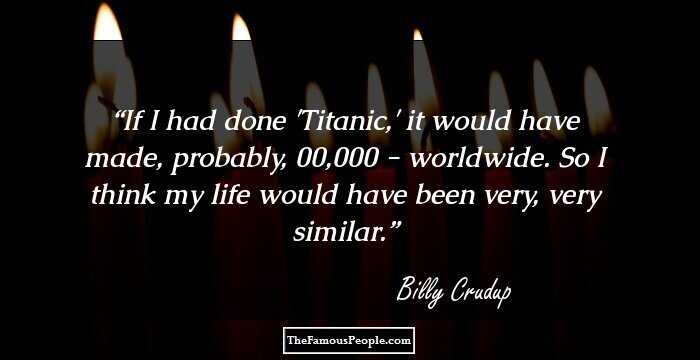 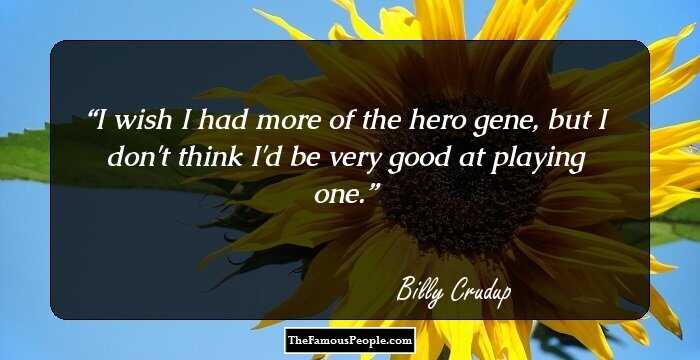 I wish I had more of the hero gene, but I don't think I'd be very good at playing one. 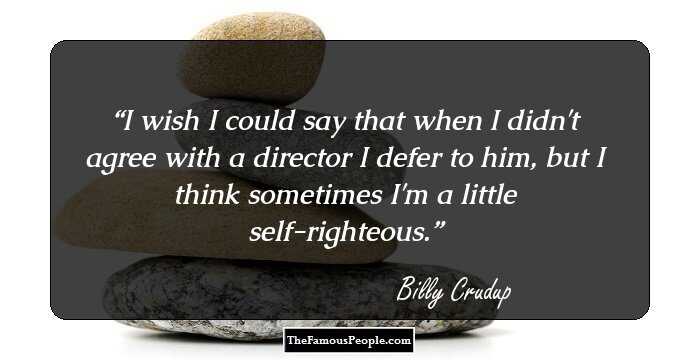 I wish I could say that when I didn't agree with a director I defer to him, but I think sometimes I'm a little self-righteous. 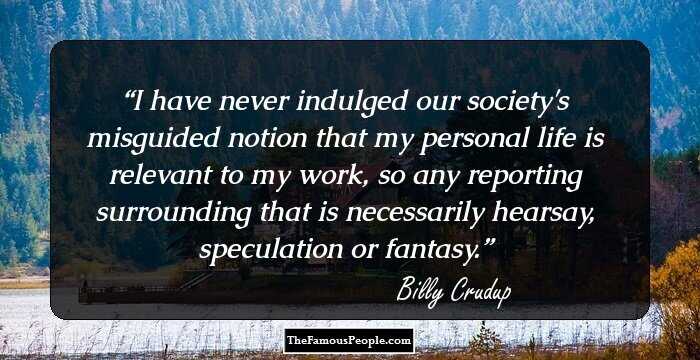 I have never indulged our society's misguided notion that my personal life is relevant to my work, so any reporting surrounding that is necessarily hearsay, speculation or fantasy. 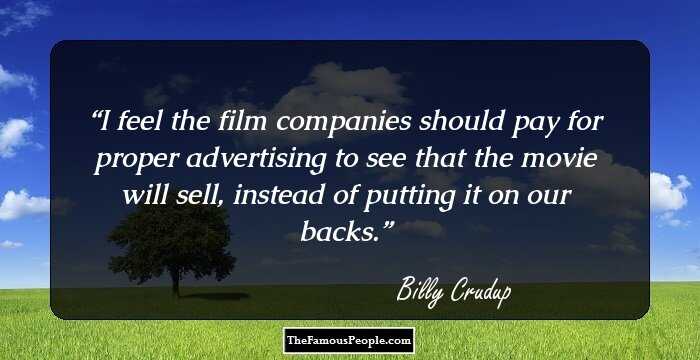 I feel the film companies should pay for proper advertising to see that the movie will sell, instead of putting it on our backs. 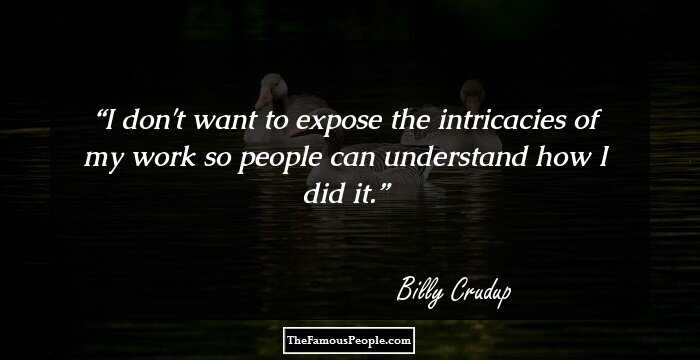 I don't want to expose the intricacies of my work so people can understand how I did it. 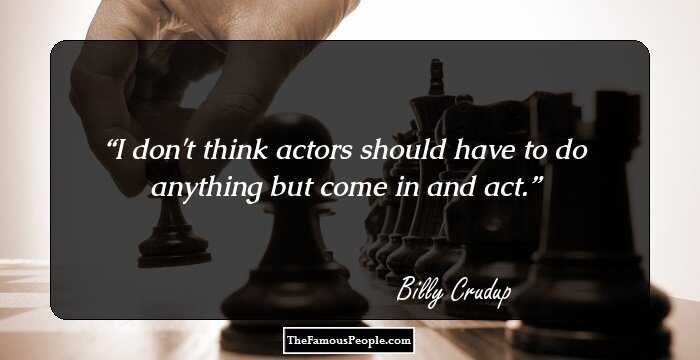 I don't think actors should have to do anything but come in and act. 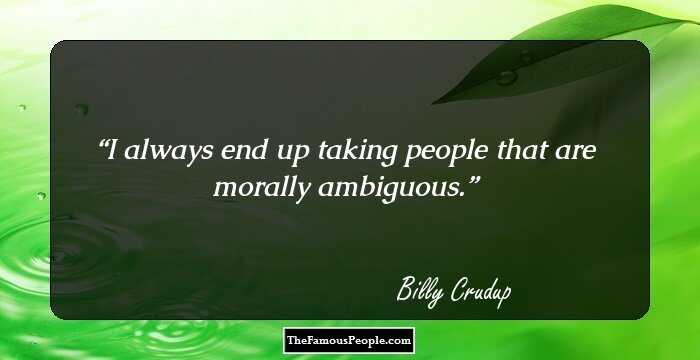 I always end up taking people that are morally ambiguous. 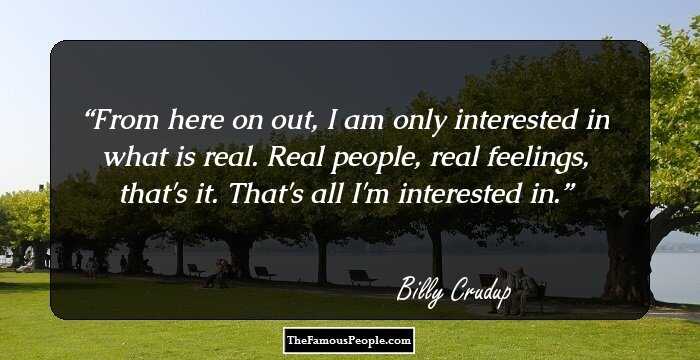 From here on out, I am only interested in what is real. Real people, real feelings, that's it. That's all I'm interested in. 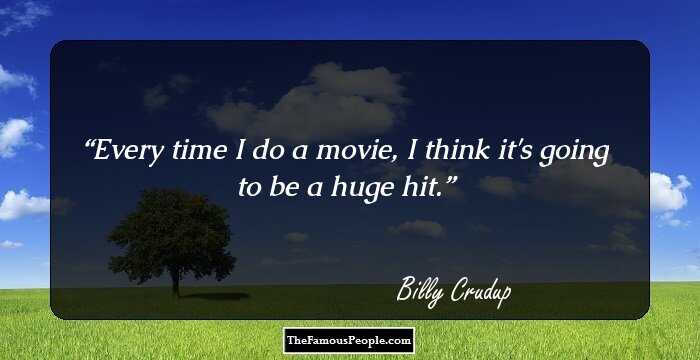 Every time I do a movie, I think it's going to be a huge hit. 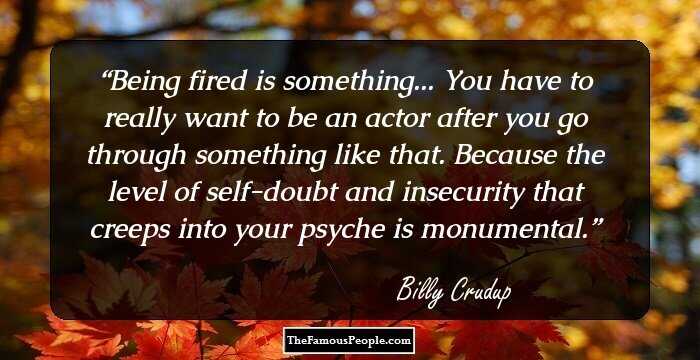 Being fired is something... You have to really want to be an actor after you go through something like that. Because the level of self-doubt and insecurity that creeps into your psyche is monumental. 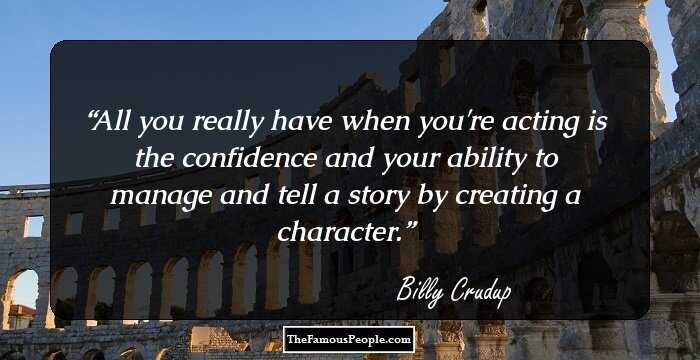 All you really have when you're acting is the confidence and your ability to manage and tell a story by creating a character. 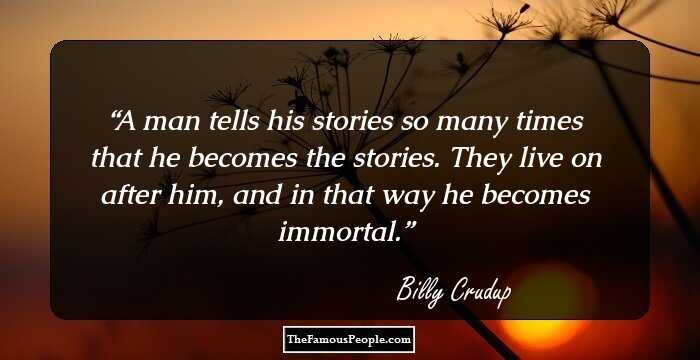 A man tells his stories so many times that he becomes the stories. They live on after him, and in that way he becomes immortal.

I put a lot of time and energy and thought behind what I do and the characters that I create, and I don't want to do anything peripheral that is going to make an audience see me up there on the screen rather than who I'm playing.

My parents were really encouraging. But I had to teach them the proper way you respond to an actor after seeing a play - regardless of whether you like their performance you tell them how great they are because they have to go on again the next night.

One of the great tools we use in acting is the idea of immediacy, that the audience gets to see you witness something apparently for the first time, so you create a lot of tools to kind of trick yourself into making it appear something is happening for the first time.

When you get many opportunities early on, and you have people who have been working for a while counting on you, you have to at least pretend that you know what you're doing. So any actor that's pretending, you start to develop philosophies. Without years and years of experience, you kind of go with an attitude that you know what you're doing. And so I think right around that time, I was kind of at the peak of rigidly thinking that I knew how to work in film in a way that I wanted to. Cameron was extremely patient and generous with me.

You can find the richness in any moment, even the most seemingly bleak. To try to do a movie about that was a joyful experience. So actually, it was really the context of it that made the experience so worthwhile, rather than the actual subject matter, if that makes sense.

You have to let go of stuff when you act for a while. You stay too attached to things that have worked or haven't worked, it kind of makes it harder for you to move forward. So I try to concentrate on the experience that I have and then let the public expression of it be its own deal.