Algernon Charles Swinburne was an English poet, playwright, novelist and a Victorian Era critic renowned for his obsession towards lesbianism and medieval history. Charles brought into light anathematic issues such as BDSM, sado-masochism, cannibalism and anti-theism. His popular collective works include Poems and Ballads, The poems of Algernon Charles Swinburne, The Swinburne Letters and A Century of Roundels. Swinburneâs style of poetry was heavily influenced by the thoughts of legendary writers such as William Shakespeare, Percy Bysshe Shelley, Alfred Lord Tennyson and Victor Hugo. He was nominated for Nobel Prize for literature multiple times during the first decade of the 20th century. During the later stages of his career as a poet, he focused into issues concerning politics and philosophy. Many considered Swinburne to be the master of vocabulary and rhyming while criticizing his use of intricate words, which emphasized only on rhyming scheme with trivial context. Swinburneâs quotes were based on spirituality and the relationship between the human soul and God. We have collected some of his most famous quotes from his writings and characters. Here are some of the famous quotes from this bold English poet in the Victorian Era. 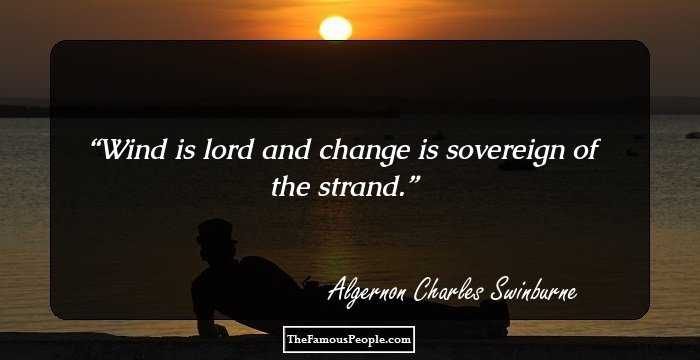 Wind is lord and change is sovereign of the strand. 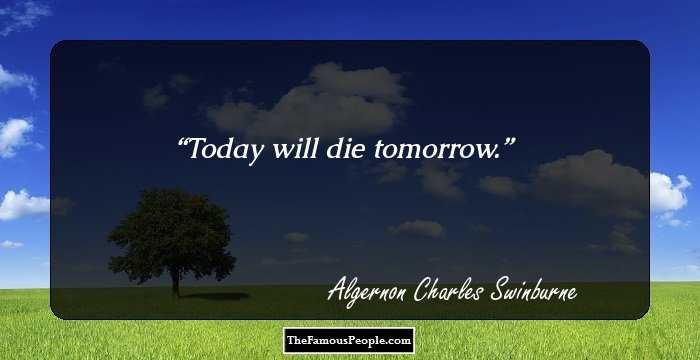 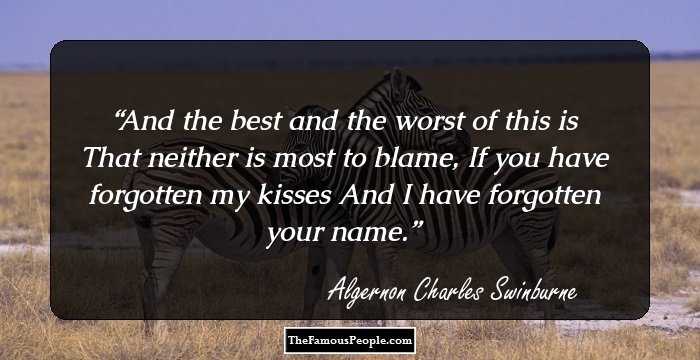 You I
Algernon Charles Swinburne 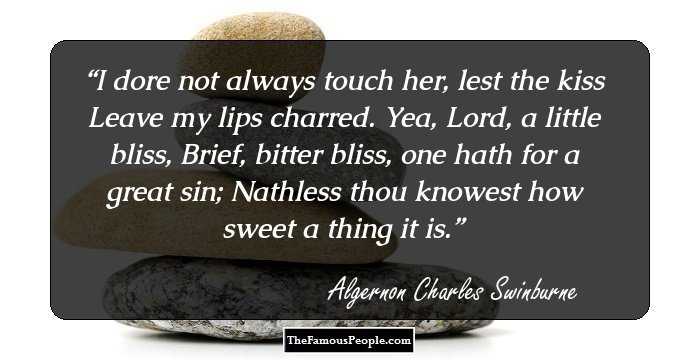 I dore not always touch her, lest the kiss Leave my lips charred. Yea, Lord, a little bliss, Brief, bitter bliss, one hath for a great sin; Nathless thou knowest how sweet a thing it is. 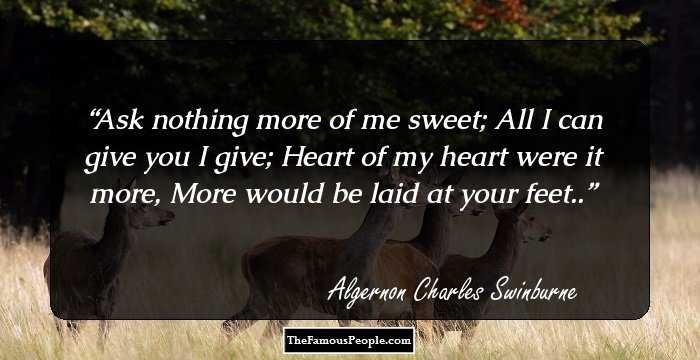 Ask nothing more of me sweet; All I can give you I give; Heart of my heart were it more, More would be laid at your feet..

You Me Heart I
Algernon Charles Swinburne

A man is not an orange. You can't eat the fruit and throw the peel away. 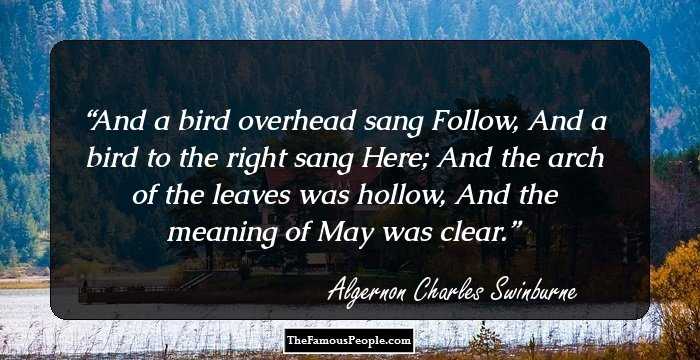 And a bird overhead sang Follow, And a bird to the right sang Here; And the arch of the leaves was hollow, And the meaning of May was clear. 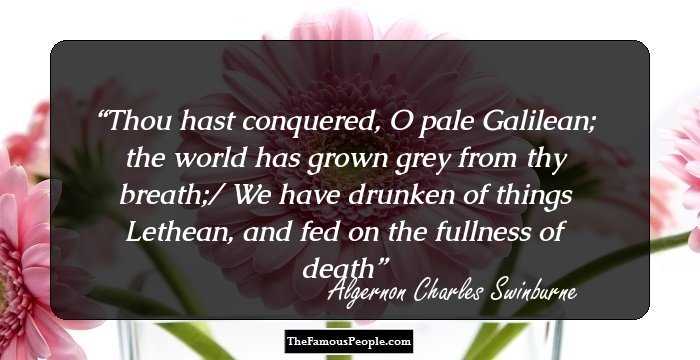 Thou hast conquered, O pale Galilean; the world has grown grey from thy breath;/ We have drunken of things Lethean, and fed on the fullness of death 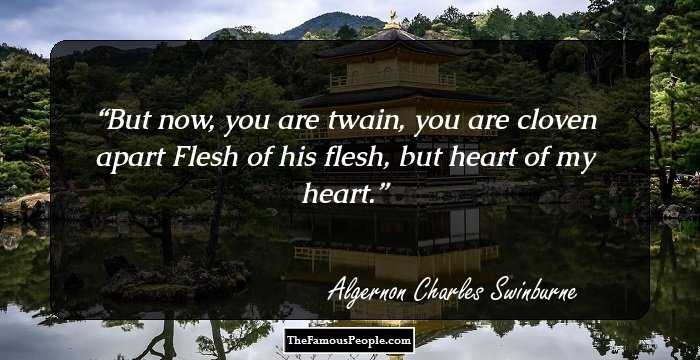 But now, you are twain, you are cloven apart Flesh of his flesh, but heart of my heart. 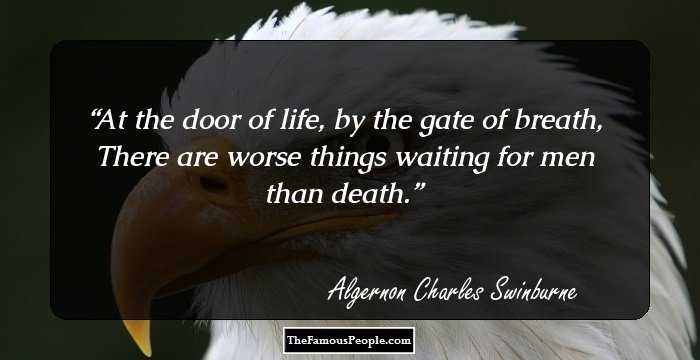 At the door of life, by the gate of breath, There are worse things waiting for men than death. 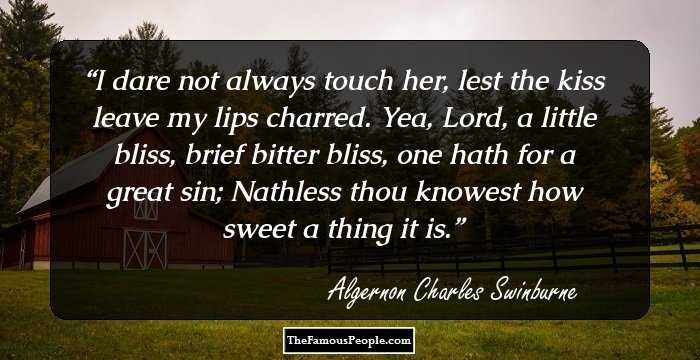 I dare not always touch her, lest the kiss leave my lips charred. Yea, Lord, a little bliss, brief bitter bliss, one hath for a great sin; Nathless thou knowest how sweet a thing it is. 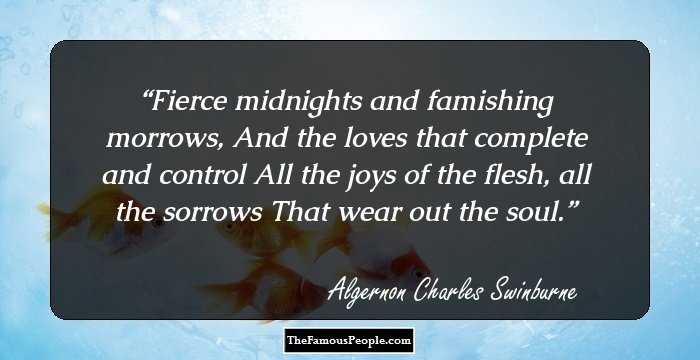 Fierce midnights and famishing morrows, And the loves that complete and control All the joys of the flesh, all the sorrows That wear out the soul. 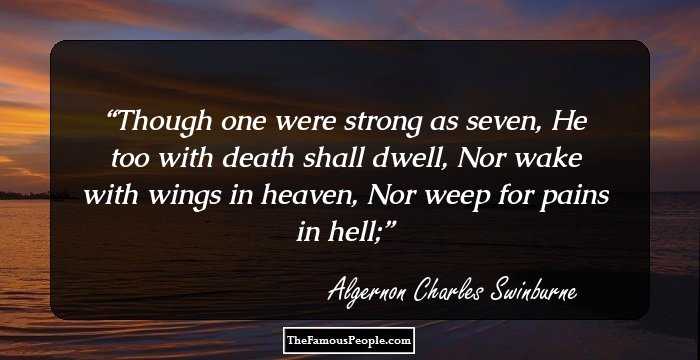 Though one were strong as seven, He too with death shall dwell, Nor wake with wings in heaven, Nor weep for pains in hell; 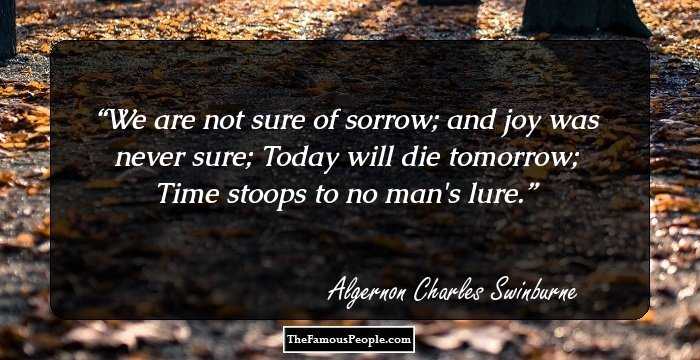 We are not sure of sorrow; and joy was never sure; Today will die tomorrow; Time stoops to no man's lure. 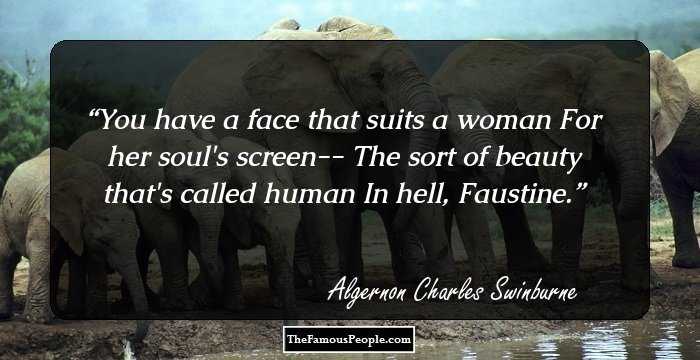 You have a face that suits a woman For her soul's screen-- The sort of beauty that's called human In hell, Faustine. 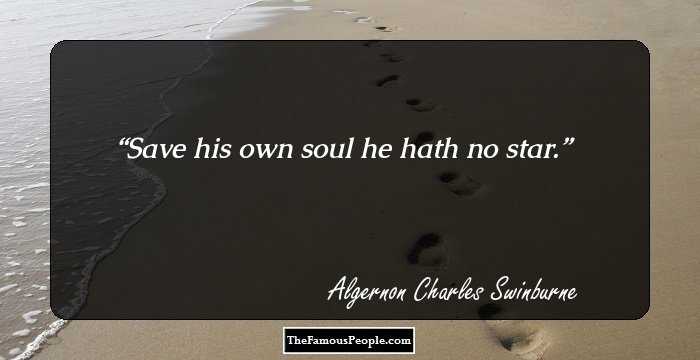 Save his own soul he hath no star. 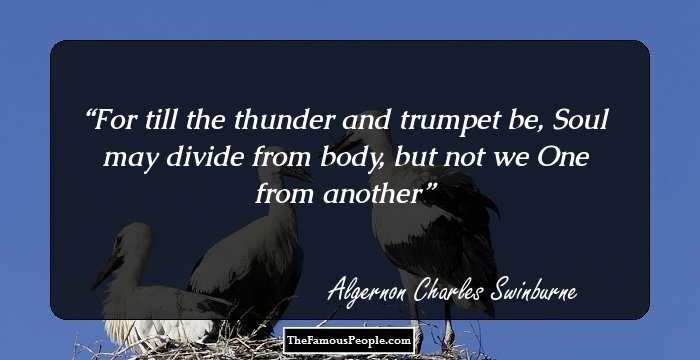 For till the thunder and trumpet be, Soul may divide from body, but not we One from another 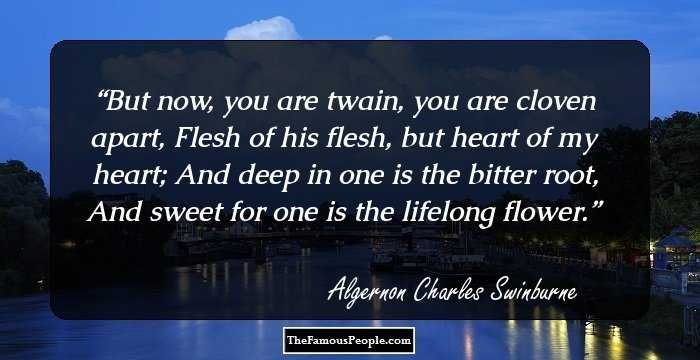 But now, you are twain, you are cloven apart, Flesh of his flesh, but heart of my heart; And deep in one is the bitter root, And sweet for one is the lifelong flower. 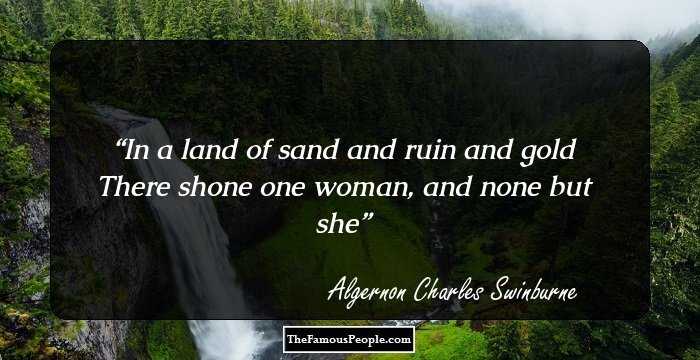 In a land of sand and ruin and gold There shone one woman, and none but she 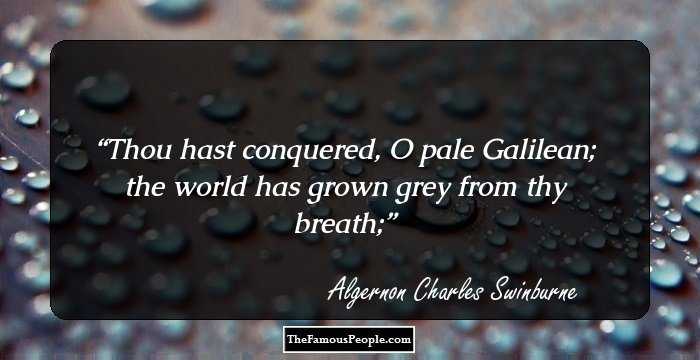 Thou hast conquered, O pale Galilean; the world has grown grey from thy breath; 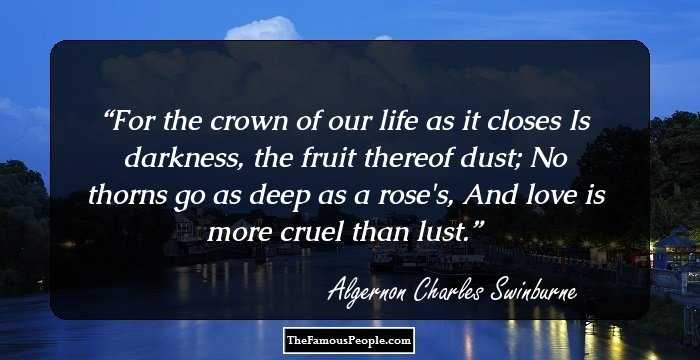 For the crown of our life as it closes Is darkness, the fruit thereof dust; No thorns go as deep as a rose's, And love is more cruel than lust.