Famous As: Writer
Born On: December 23, 1955
Born In: Glasgow, Scotland
Age: 66 Years
Carol Ann Duffy is a renowned Scottish playwright and poet. She is the first female to have been appointed Poet Laureate of the United Kingdom. She was interested in reading and writing poems from the very beginning and got her first poem published at an early age of 15. She served as a poetry critic for âThe Guardianâ and even worked as an editor for a poetry magazine. Her poem âStanding Female Nudeâ was well appreciated by the masses and was honored with the âScottish Arts Council Awardâ. This was followed by âSelling Manhattanâ which was another notable work of her career and received the âSomerset Maugham Awardâ. She further published âMean Timeâ which was honored with multiple awards including the âForward Poetry Prizeâ. She went on to write many poetry books which covered various topics like sexism, equality, and birth and were critically appreciated. She even wrote many childrenâs book, including the âThe Tear Thiefâ which became one of her most popular books. She was honored with various awards including âEric Gregory Awardâ for her admired literary works. We bring to you a treasure trove of quotes and thoughts by Carol Ann Duffy which have been extracted from the vast sea of her work, writings, books, poems and interviews. Read on the collection of thoughts and quotations by Carol Ann Duffy.
Listed In:
Writers
Poets 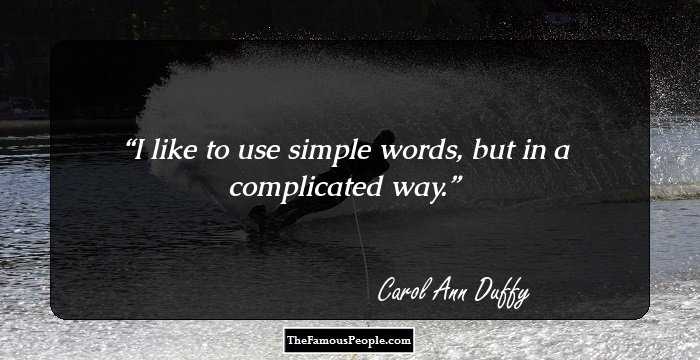 I like to use simple words, but in a complicated way. 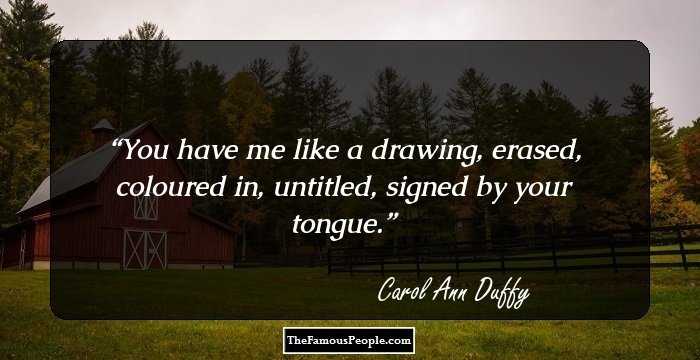 You have me like a drawing, erased, coloured in, untitled, signed by your tongue. 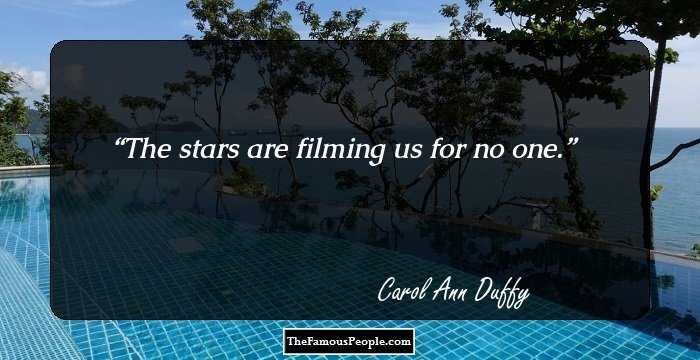 The stars are filming us for no one. 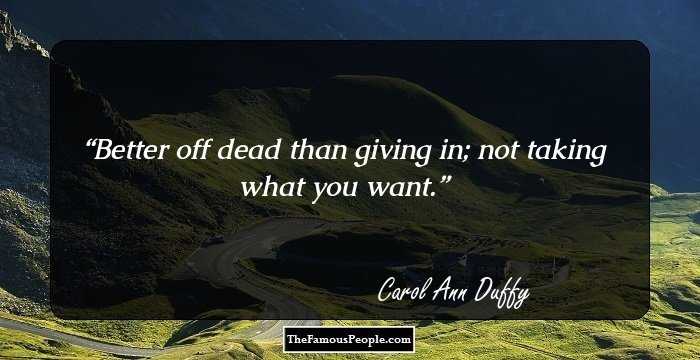 Better off dead than giving in; not taking what you want. 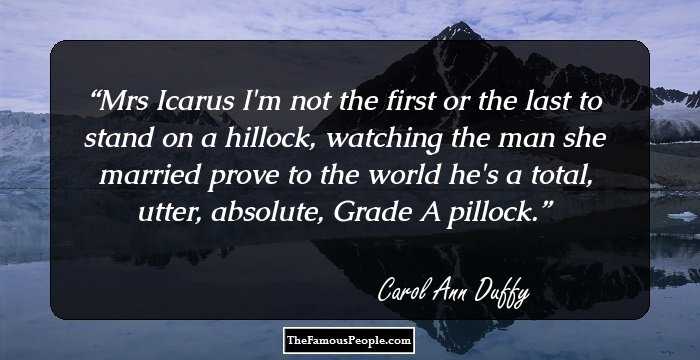 Mrs Icarus I'm not the first or the last to stand on a hillock, watching the man she married prove to the world he's a total, utter, absolute, Grade A pillock. 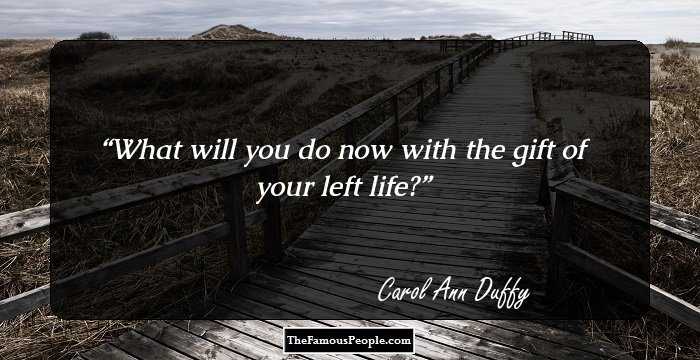 What will you do now with the gift of your left life?

You Life Will
Carol Ann Duffy 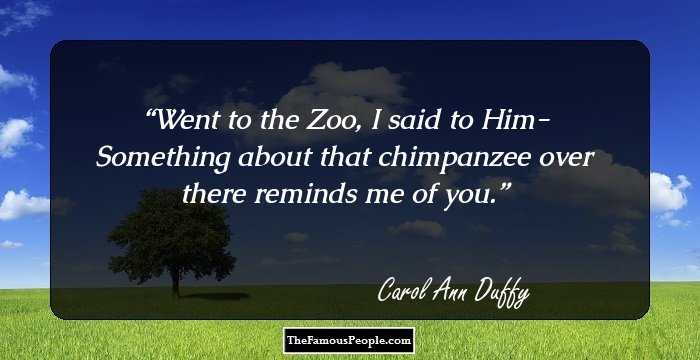 Went to the Zoo, I said to Him- Something about that chimpanzee over there reminds me of you.

You Me I
Carol Ann Duffy 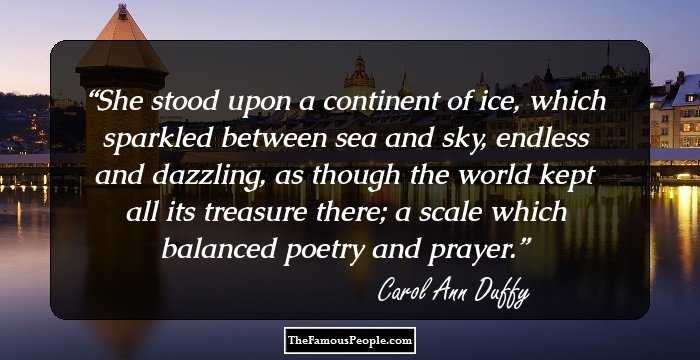 She stood upon a continent of ice, which sparkled between sea and sky, endless and dazzling, as though the world kept all its treasure there; a scale which balanced poetry and prayer. 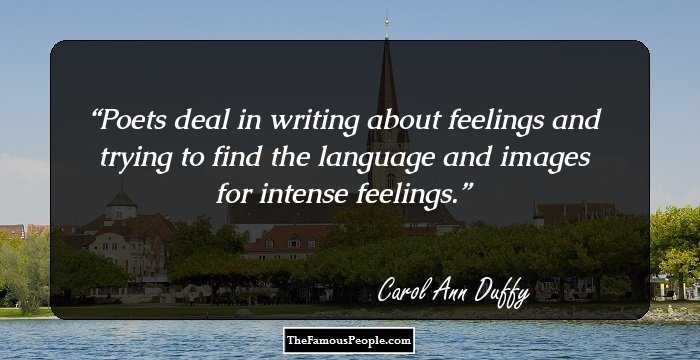 Poets deal in writing about feelings and trying to find the language and images for intense feelings. 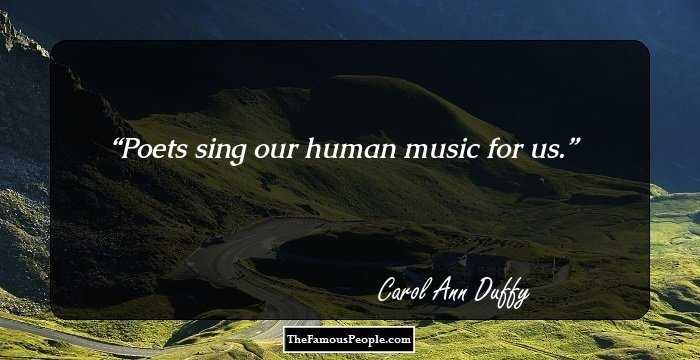 Poets sing our human music for us. 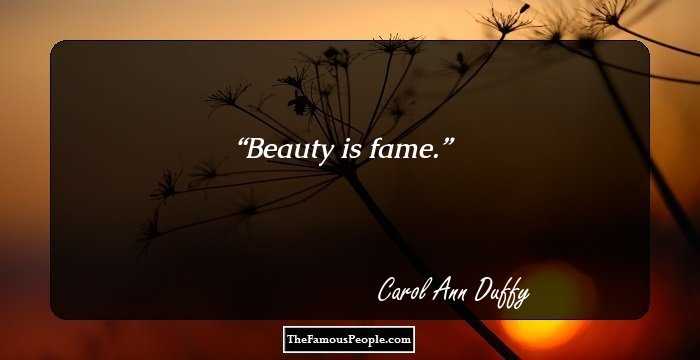 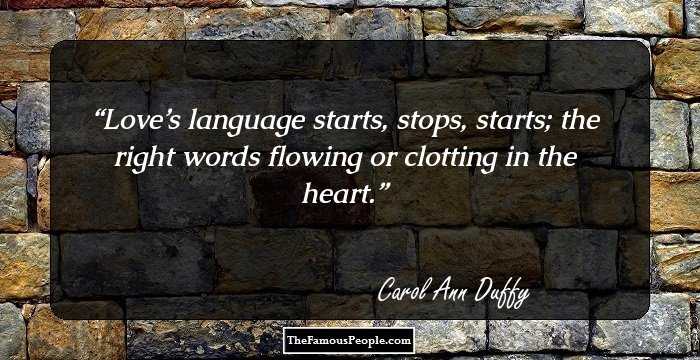 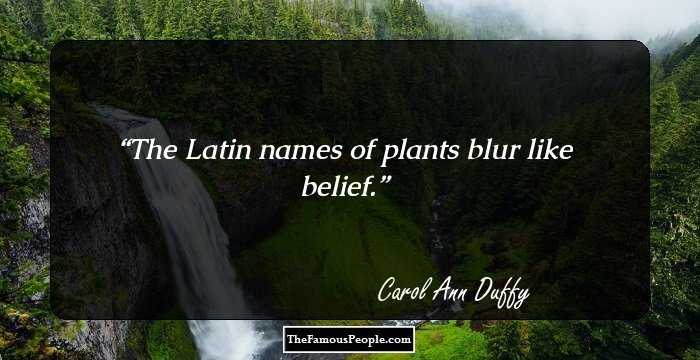 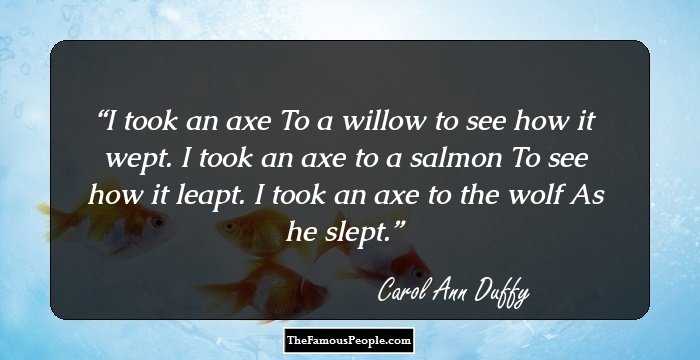 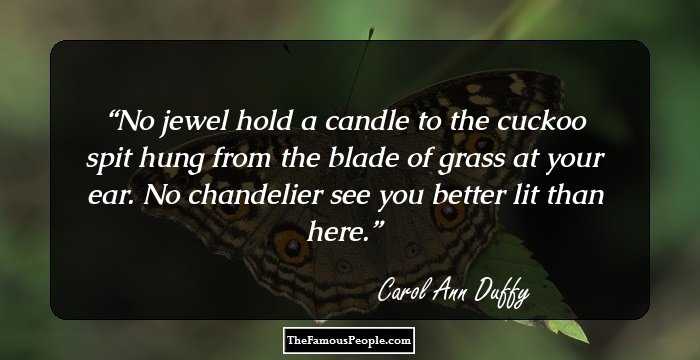 No jewel hold a candle to the cuckoo spit hung from the blade of grass at your ear. No chandelier see you better lit than here. 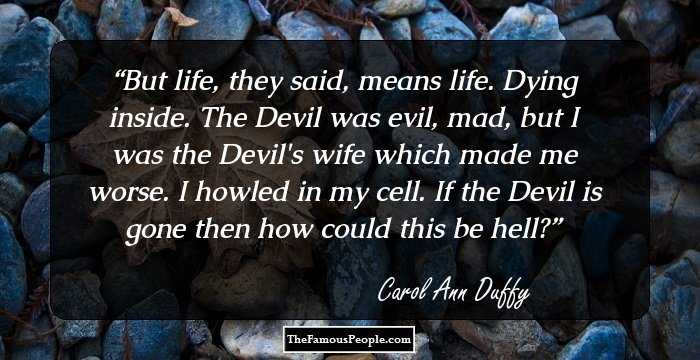 But life, they said, means life. Dying inside. The Devil was evil, mad, but I was the Devil's wife which made me worse. I howled in my cell. If the Devil is gone then how could this be hell?

Life Me I
Carol Ann Duffy 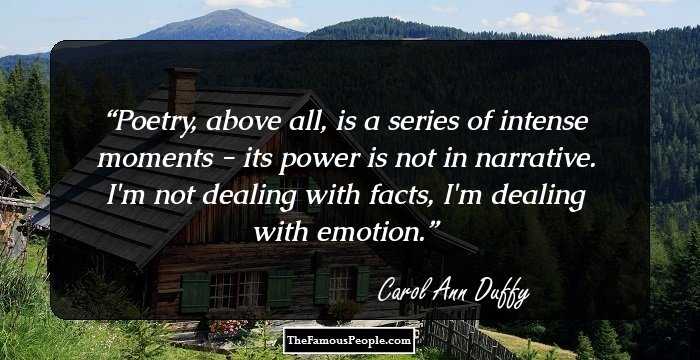 Poetry, above all, is a series of intense moments - its power is not in narrative. I'm not dealing with facts, I'm dealing with emotion. 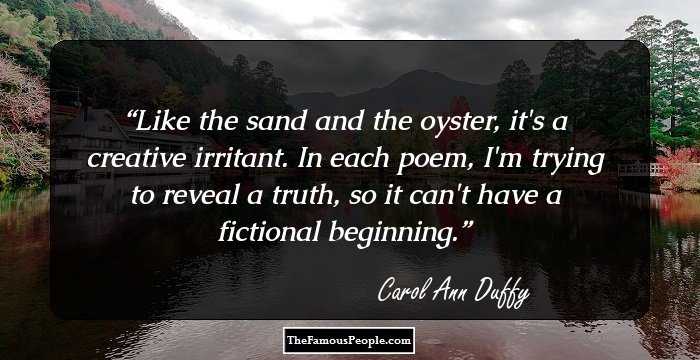 Like the sand and the oyster, it's a creative irritant. In each poem, I'm trying to reveal a truth, so it can't have a fictional beginning. 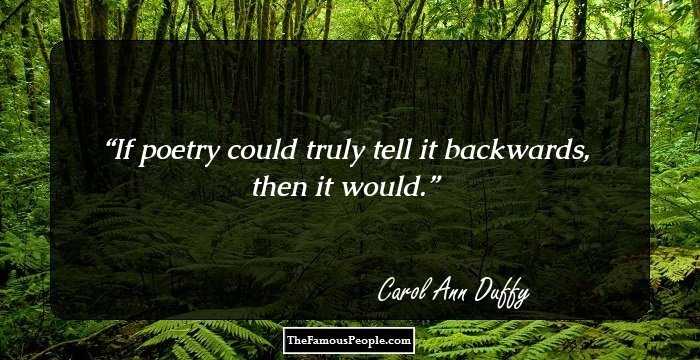 If poetry could truly tell it backwards, then it would. 100 Top quotes by Angela Carter, The Author of The Bloody Chamber 158 Wisest Quotes By George MacDonald Which Will Enrich Your Life