Yash Chopra was a celebrated Indian film producer and director. He founded the distribution and film company âYash Raj Films.â He won numerous awards and accolades for his works, including eleven âFilmfare Awards,â and six âNational Film Awards.â Regarded as one of the most illustrious filmmakers, he was a recipient of the âPadma Bhushanâ and the âDadasaheb Phalkeâ award. He was the foremost Indian to receive the honour of lifetime membership of the âBritish Academy of Film and Television Arts.â He shot to fame with âWaqt,â which was critically and commercially a big hit. Some of his other notable works include âKabhie Kabhie,â âDeewaar,â âChandni,â âVeer-Zara,â âDarr,â âJab Tak Hai Jaan,â âDil To Pagal Hai,â and âLamhe,â amongst various others. We have amassed some popular sayings by Yash Chopra. Zoom through the corpus of famous quotes by Yash Chopra. 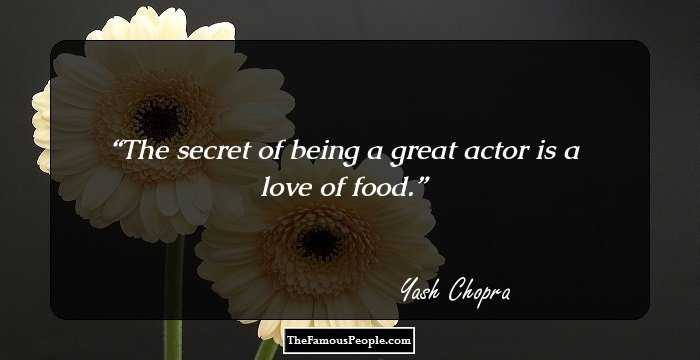 The secret of being a great actor is a love of food. 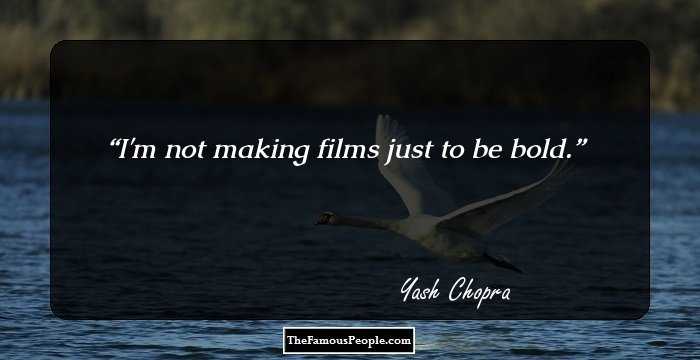 I'm not making films just to be bold. 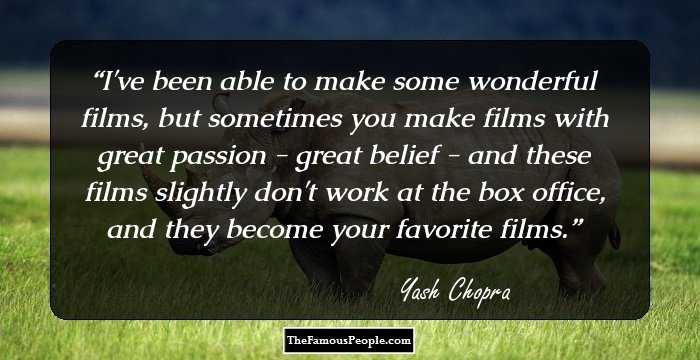 I've been able to make some wonderful films, but sometimes you make films with great passion - great belief - and these films slightly don't work at the box office, and they become your favorite films. 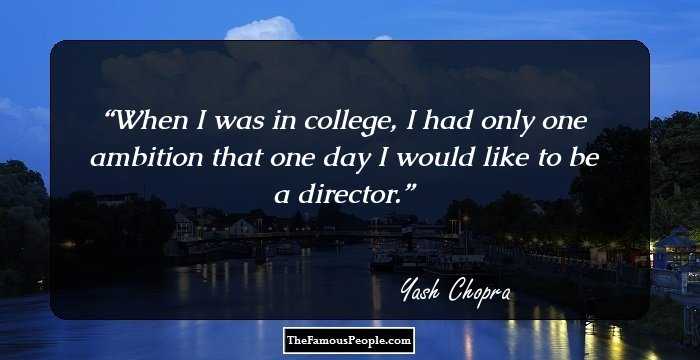 When I was in college, I had only one ambition that one day I would like to be a director. 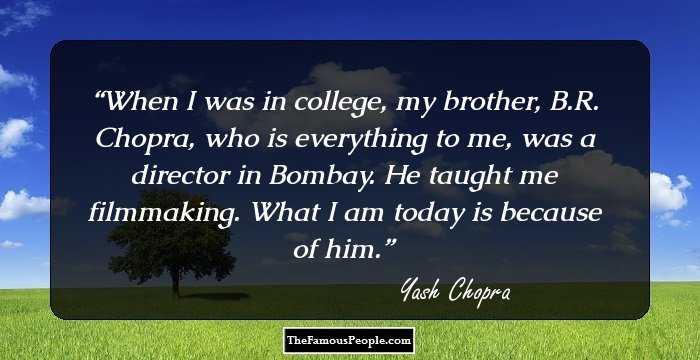 When I was in college, my brother, B.R. Chopra, who is everything to me, was a director in Bombay. He taught me filmmaking. What I am today is because of him.

Me I
Yash Chopra 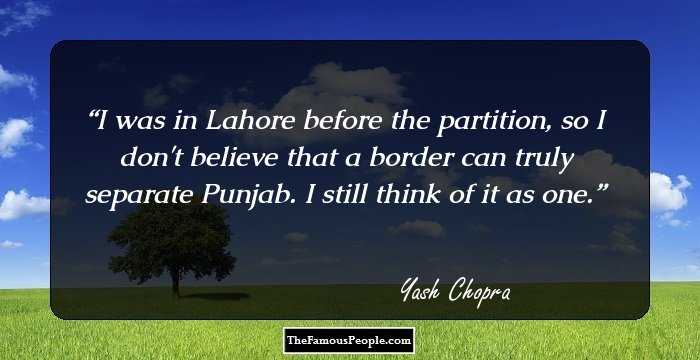 I was in Lahore before the partition, so I don't believe that a border can truly separate Punjab. I still think of it as one. 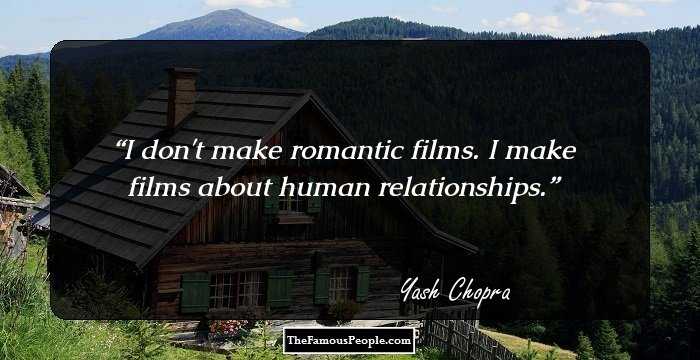 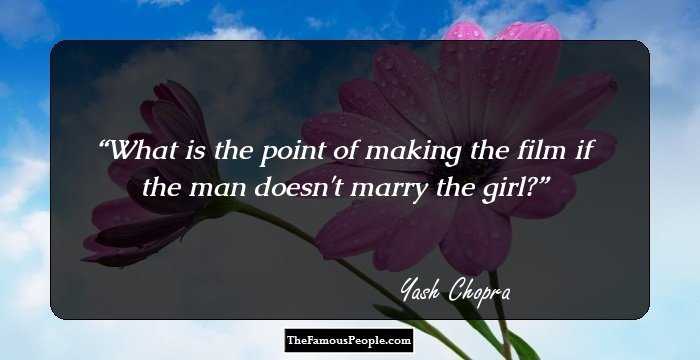 What is the point of making the film if the man doesn't marry the girl? 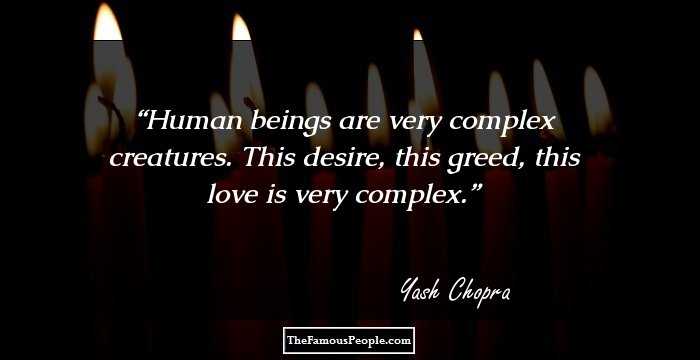 Human beings are very complex creatures. This desire, this greed, this love is very complex.

My technicians are my most important tools. Once I establish a rapport with them, then they would understand me in my next film. I wouldn't have to train anyone new. I give a lot of respect to all my technicians, because I'm a technician too. I wouldn't be able to convey a feeling if the writer didn't write it well, and the cameraman didn't shoot it well. 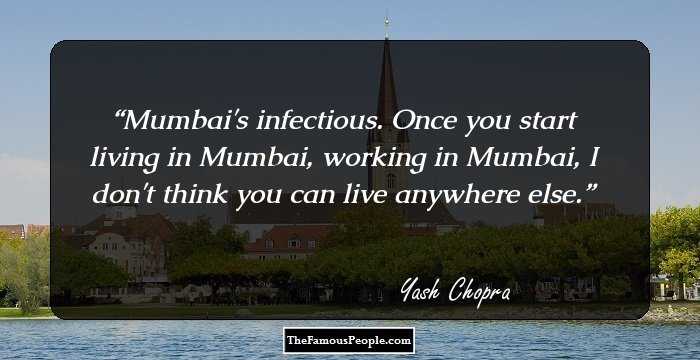 You Think Living I
Yash Chopra 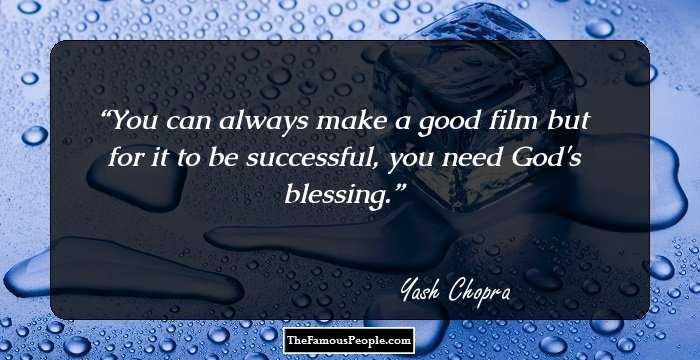 You can always make a good film but for it to be successful, you need God's blessing. 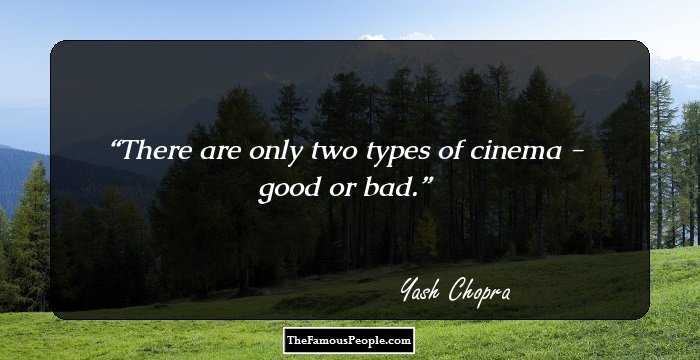 There are only two types of cinema - good or bad. 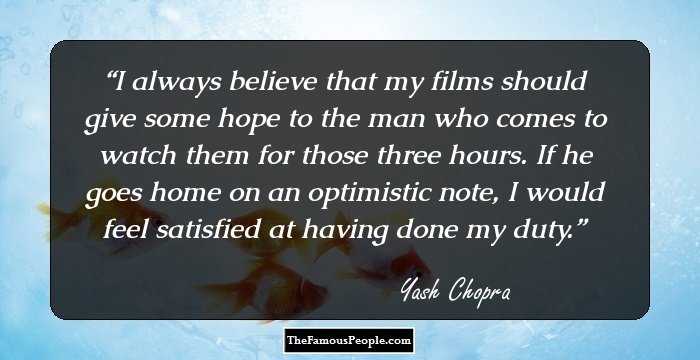 I always believe that my films should give some hope to the man who comes to watch them for those three hours. If he goes home on an optimistic note, I would feel satisfied at having done my duty.

Films have been my only passion in life. I have always been proud of making films and will continue taking pride in all my films. I have never made a movie I have not believed in. However, though I love all my films, one tends to get attached to films that do well. But I do not have any regrets about making films that did not really do well at the box office.

[on the reason for his seven-year hiatus in direction] My son Aditya made Mohabbatein, which took a lot of time and energy. Then we started looking for a script for me to direct. Nothing seemed to excite us both. There's a complete bankruptcy of screenwriting in our cinema. I wanted a very earthy and Indian subject. I was tired of the promos on television. With semi-clad girls, they all looked the same. Of course Dhoom has them too. But I'd personally not make a film like that.

Though, technically, I'm shooting on location, my films are actually based inside a woman's heart. I think women are more emotional than men, and that's a thread I've explored in all my films. When I see TV these days, I'm shocked at how all the main women characters are portrayed as evil. Women are the foundation of everything, and they deserve to be treated that way on camera. 32 Quotes By Satyajit Ray That Prove His Genius

100 Amazing Quotes By Jiddu Krishnamurti That Will Change Your Thinking