Famous As: Filmmaker of the 'New Hollywood Era' Known for His Films: 'M*A*S*Hâ,â McCabe & Mrs. Millerâ & âThe Long Goodbyeâ
Born On: February 20, 1925
Died On: November 20, 2006
Born In: Kansas City, Missouri, United States
Died At Age: 81
Robert Altman was an American filmmaker, producer, and writer. He is best remembered for directing the 1970 war comedy film âMASH.â Robert was known for his unconventional themes and anti-Hollywood satire, which made him one of the greatest directors in the history of Hollywood cinema. He took a job with the âCalvin Companyâ where he directed a film for the first time. His breakthrough came after he co-directed the documentary âThe James Dean Story,â in 1957, which got him the attention of Hollywood. Some of his popular feature films include âMcCabe & Mrs. Miller,â âNashville,â âThe Player,â âShort Cuts,â and âGosford Park.â Robert was nominated for five âAcademy Awards.â He was honored with an âHonorary Oscar,â in 2005. He won countless nominations, mentions, and prestigious awards during his career. We have curated some of his quotes from his films, interviews, etc. Letâs have a look at some of Robert Altman quotes on inspiration, chance, motivation, films, advice, mistakes, giving, winning, trying, etc.
Listed In:
Film & Theater Personalities 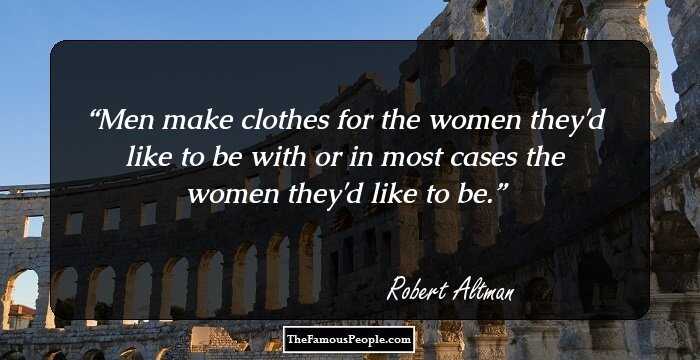 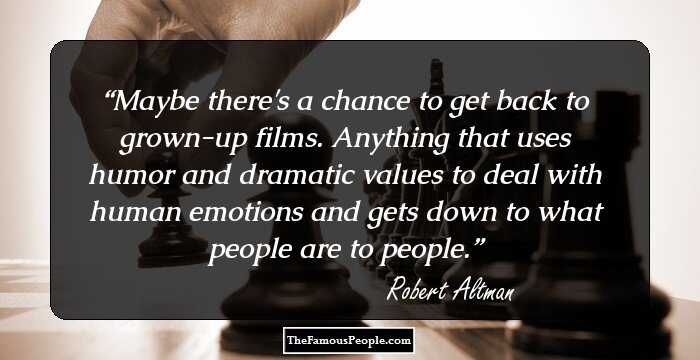 Maybe there's a chance to get back to grown-up films. Anything that uses humor and dramatic values to deal with human emotions and gets down to what people are to people. 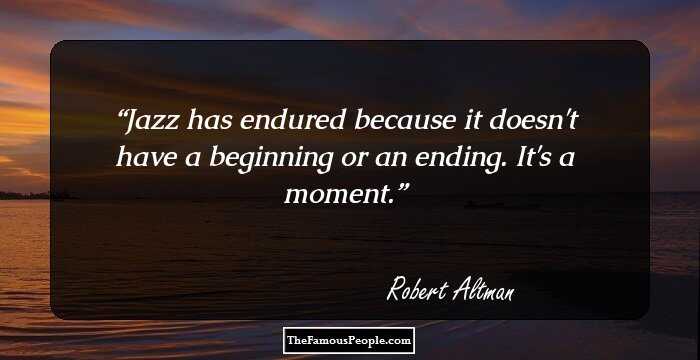 Jazz has endured because it doesn't have a beginning or an ending. It's a moment. 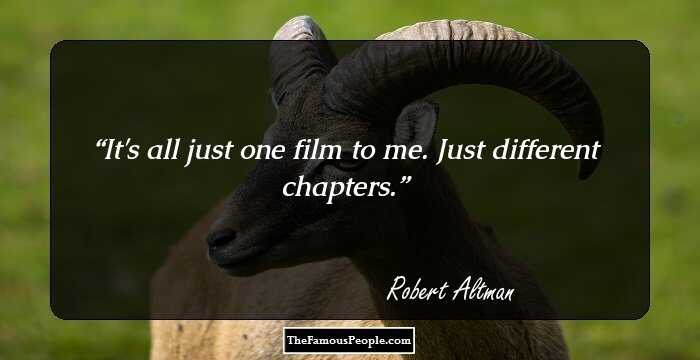 It's all just one film to me. Just different chapters. 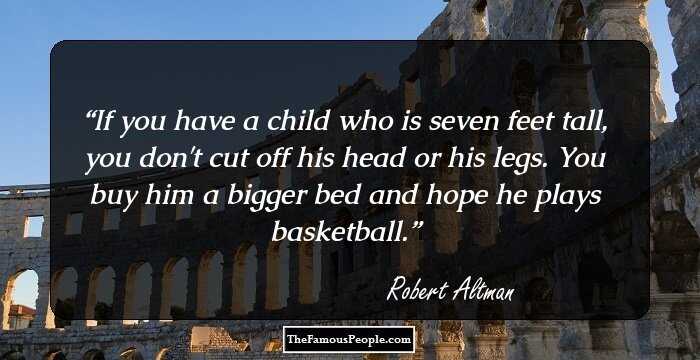 If you have a child who is seven feet tall, you don't cut off his head or his legs. You buy him a bigger bed and hope he plays basketball. 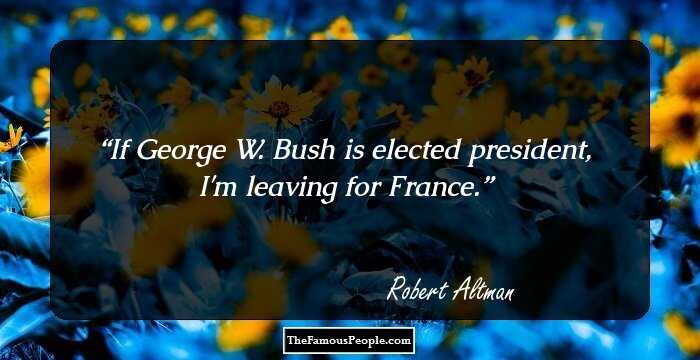 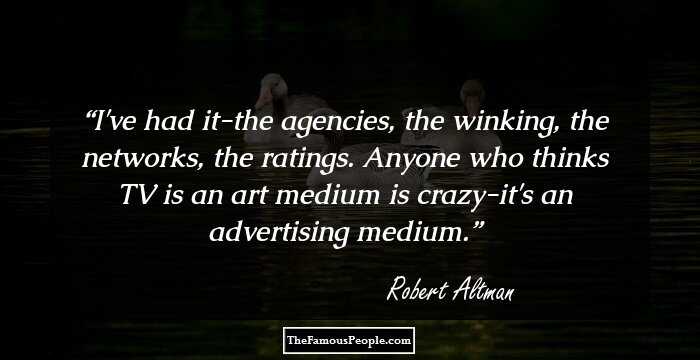 I've had it-the agencies, the winking, the networks, the ratings. Anyone who thinks TV is an art medium is crazy-it's an advertising medium. 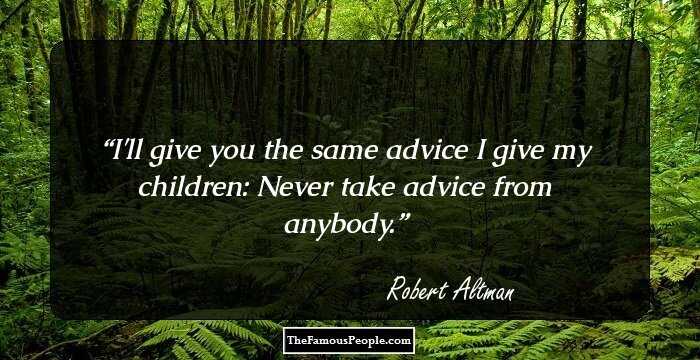 I'll give you the same advice I give my children: Never take advice from anybody. 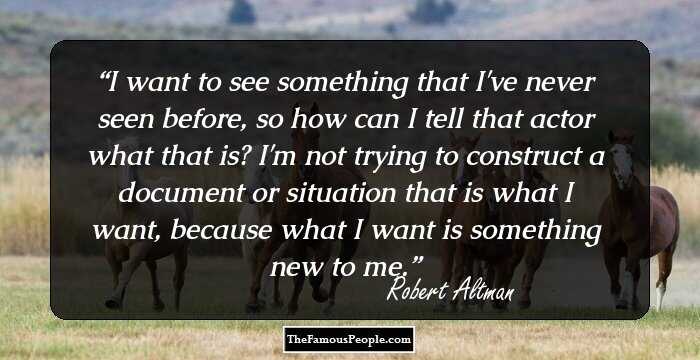 I want to see something that I've never seen before, so how can I tell that actor what that is? I'm not trying to construct a document or situation that is what I want, because what I want is something new to me. 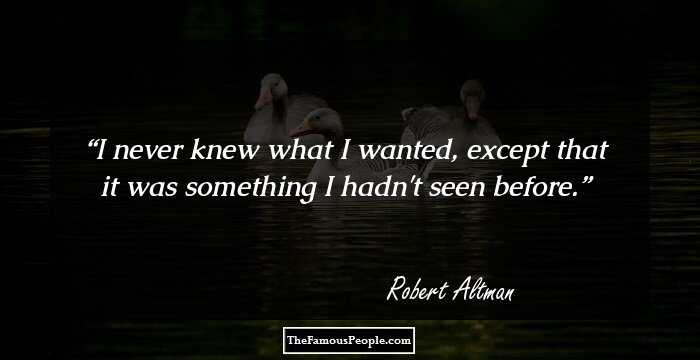 I never knew what I wanted, except that it was something I hadn't seen before. 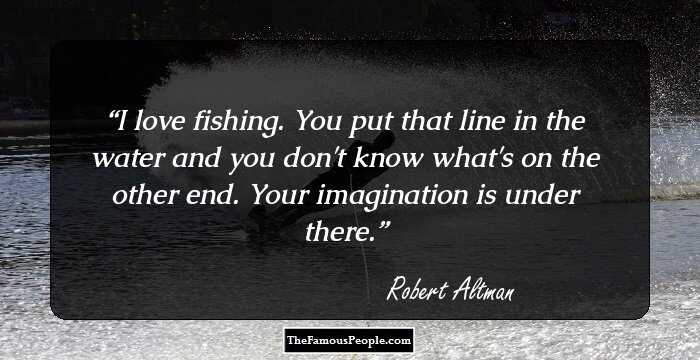 I love fishing. You put that line in the water and you don't know what's on the other end. Your imagination is under there. 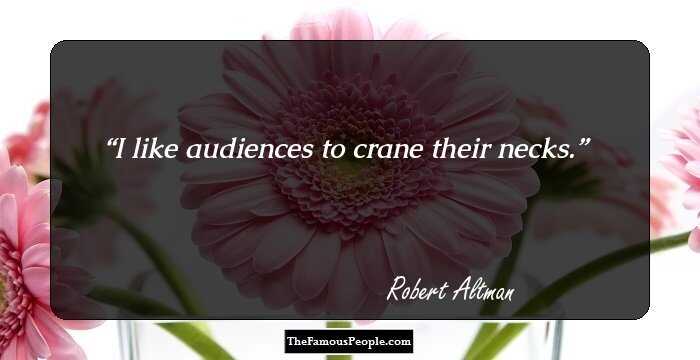 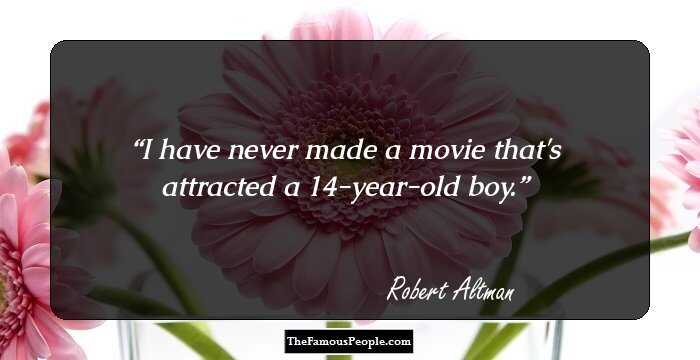 I have never made a movie that's attracted a 14-year-old boy. 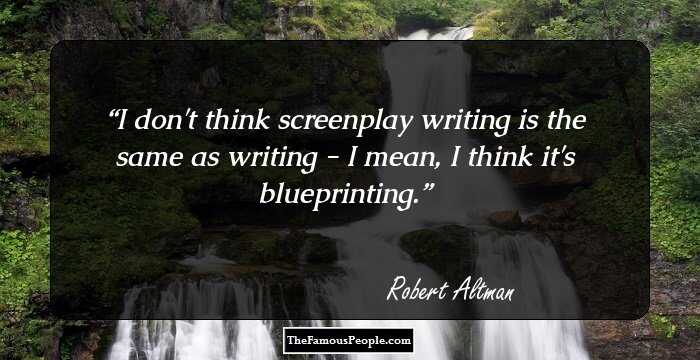 I don't think screenplay writing is the same as writing - I mean, I think it's blueprinting. 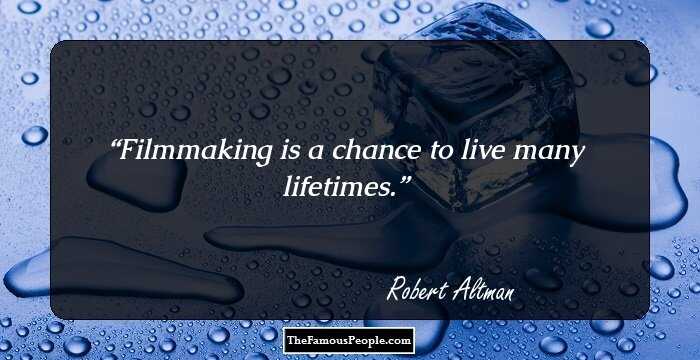 Filmmaking is a chance to live many lifetimes. 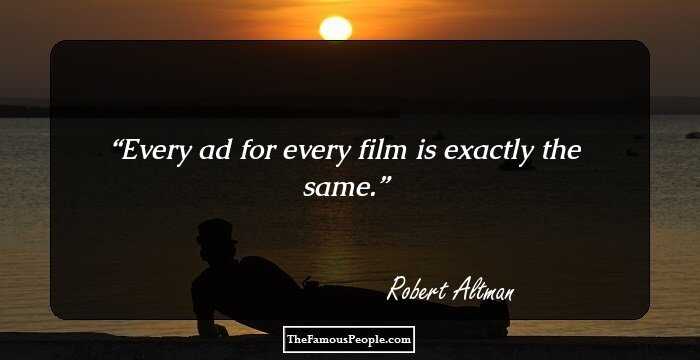 Every ad for every film is exactly the same. 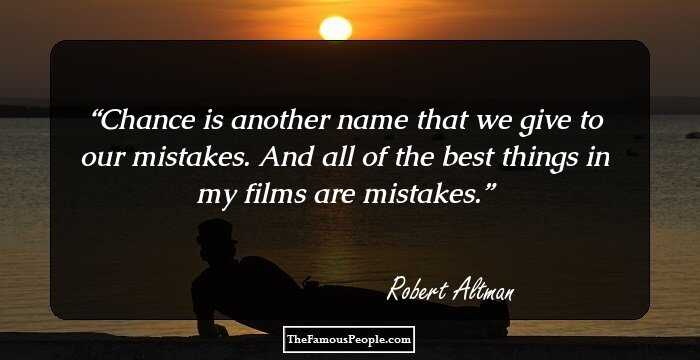 Chance is another name that we give to our mistakes. And all of the best things in my films are mistakes. 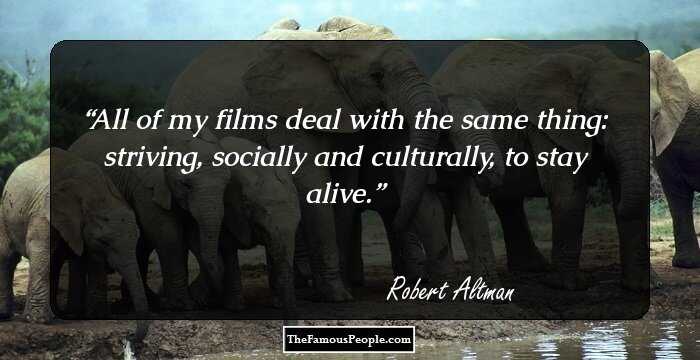 All of my films deal with the same thing: striving, socially and culturally, to stay alive.

I am not an expert. That is someone else's job. If I were expert, the approach would be all wrong. It would be from the inside. I am a blunderer. I usually don't know what I am going into at the start. I go into the fog and trust something will be there.

I insist that they do what they became actors to do. I want them to create something and not just hit marks and say words. So they all love that because they're playing. It's called playacting. Their contributions are not only welcomed, but are accepted and used.

I was a heavy drinker, but the alcohol affected my heart rather than my liver. So I stopped. I smoke grass now. I say that to everybody, because marijuana should be legalized. It's ridiculous that it isn't. If at the end of the day I feel like smoking a joint I do it. It changes the perception of what I've been through all day.

If something works for you, you continue to do it. I did a bunch of pictures for 20th Century Fox when Alan Ladd was over there, but I set the budgets so low that they'd approve and I'd deliver the film. They would have no say in it, which is the kind of arrangement I liked.

Making a movie is like chipping away at a stone. You take a piece off here, you take a piece off there and when you're finished, you have a sculpture. You know that there's something in there, but you're not sure exactly what it is until you find it.