Famous As: Best Known for His Role in the Film 'Apocalypse Now' and TV Series 'The West Wing'
Born On: August 3, 1940
Born In: Dayton, Ohio, United States
Age: 82 Years

Ramon Gerard Antonio Estevez, renowned as Martin Sheen, is a distinguished American actor. He first hogged the limelight for his roles in films âBadlandsâ and âThe Subject Was Roses.â He gained international acclaim for his roles in âThe West Wingâ for which he earned two âScreen Actors Guild Awardâ and a âGolden Globeâ; Â âApocalypse Now,â for which he also bagged in a âBAFTA Awardâ nomination; and âGrace and Frankie.â In 1989, he was honoured with a star on the âHollywood Walk of Fame.â He earned an âEmmy Awardâ for his role in âMurphy Brown.â Here is a compilation of interesting sayings by Martin Sheen faith, self, age, happiness, pain, perseverance, acting, time, pain, winning, gratitude, accomplishments, etc. 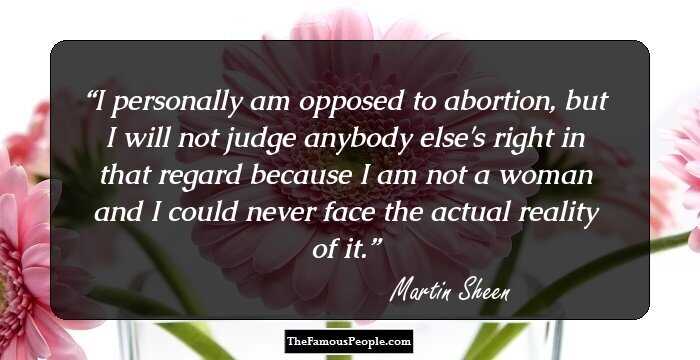 I personally am opposed to abortion, but I will not judge anybody else's right in that regard because I am not a woman and I could never face the actual reality of it. 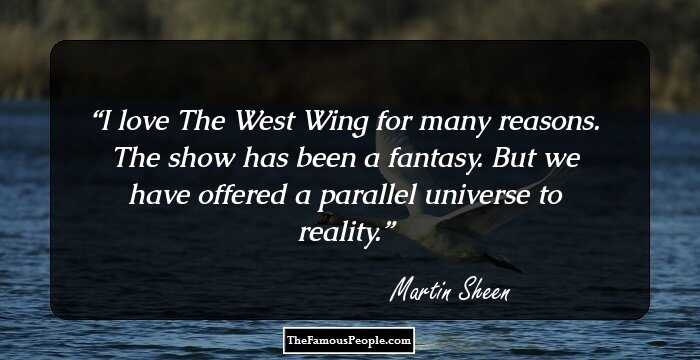 I love The West Wing for many reasons. The show has been a fantasy. But we have offered a parallel universe to reality. 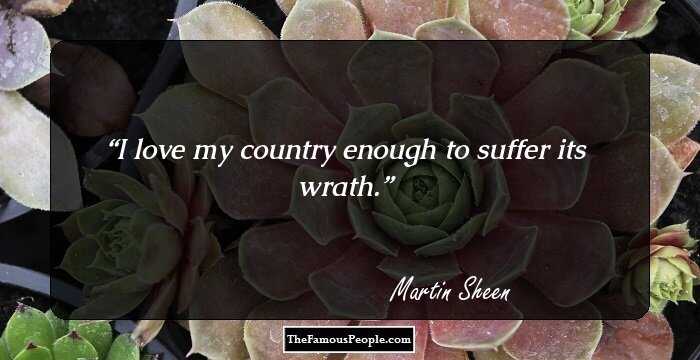 I love my country enough to suffer its wrath. 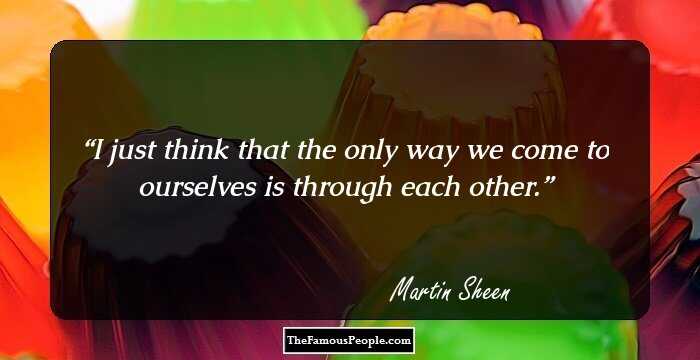 I just think that the only way we come to ourselves is through each other. 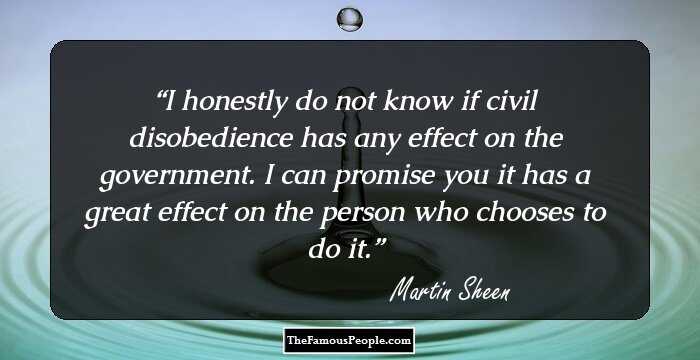 I honestly do not know if civil disobedience has any effect on the government. I can promise you it has a great effect on the person who chooses to do it. 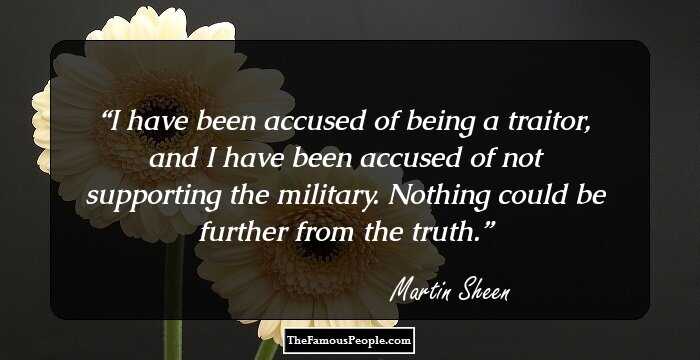 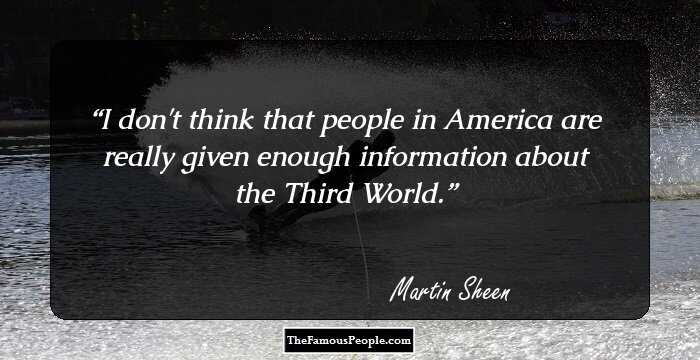 I don't think that people in America are really given enough information about the Third World. 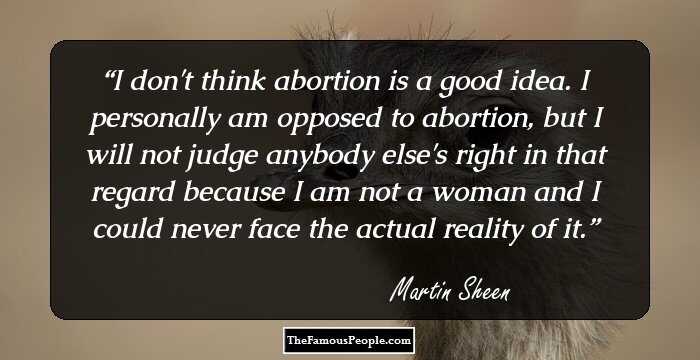 I don't think abortion is a good idea. I personally am opposed to abortion, but I will not judge anybody else's right in that regard because I am not a woman and I could never face the actual reality of it. 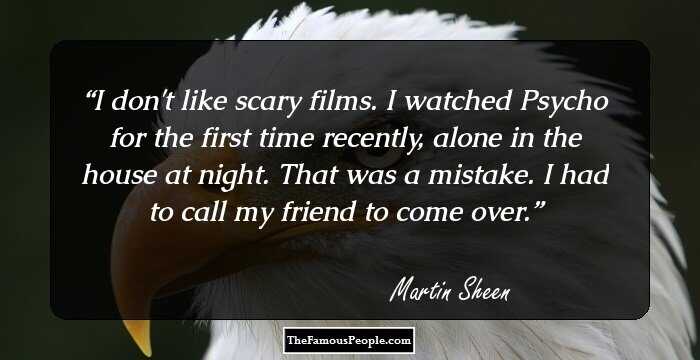 I don't like scary films. I watched Psycho for the first time recently, alone in the house at night. That was a mistake. I had to call my friend to come over. 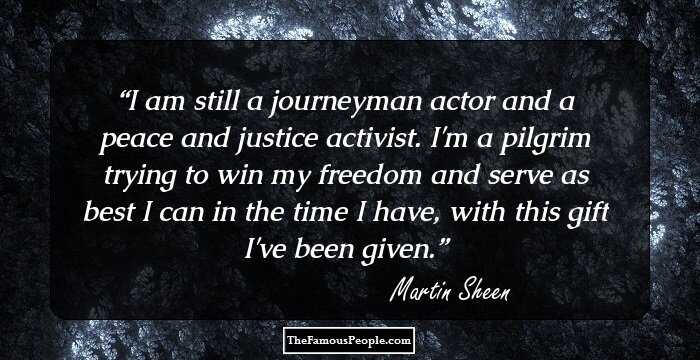 I am still a journeyman actor and a peace and justice activist. I'm a pilgrim trying to win my freedom and serve as best I can in the time I have, with this gift I've been given. 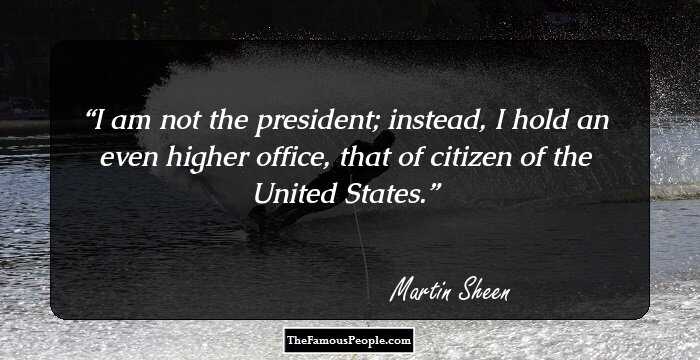 I am not the president; instead, I hold an even higher office, that of citizen of the United States. 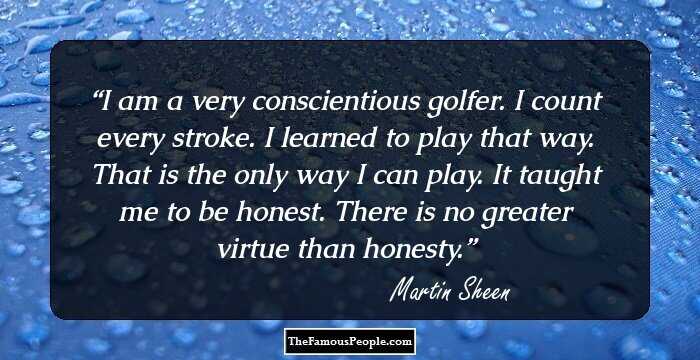 I am a very conscientious golfer. I count every stroke. I learned to play that way. That is the only way I can play. It taught me to be honest. There is no greater virtue than honesty. 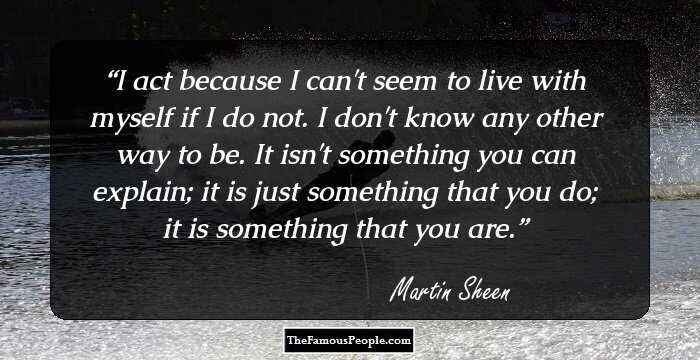 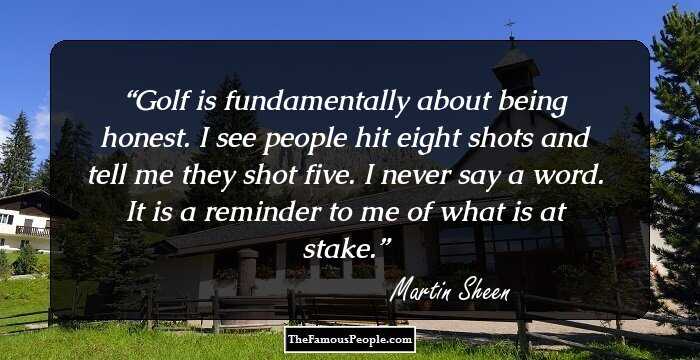 Golf is fundamentally about being honest. I see people hit eight shots and tell me they shot five. I never say a word. It is a reminder to me of what is at stake. 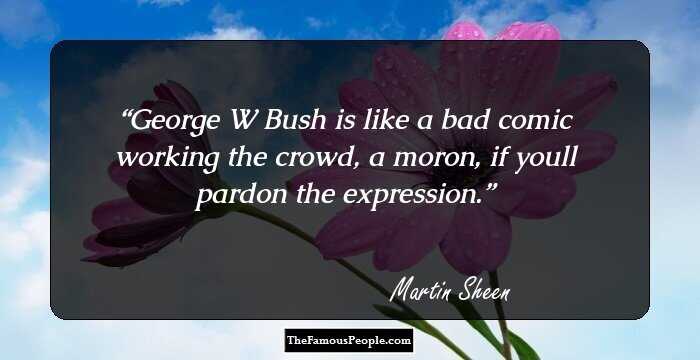 George W Bush is like a bad comic working the crowd, a moron, if youll pardon the expression. 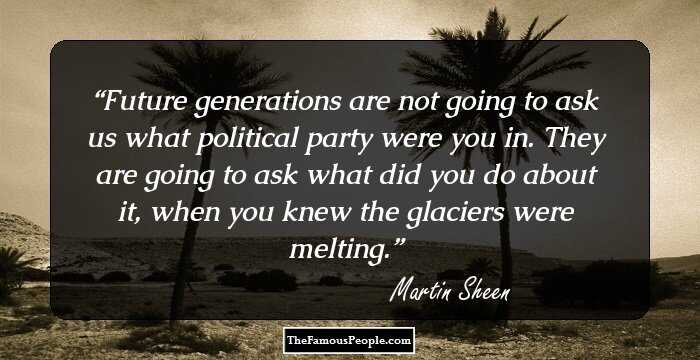 Future generations are not going to ask us what political party were you in. They are going to ask what did you do about it, when you knew the glaciers were melting. 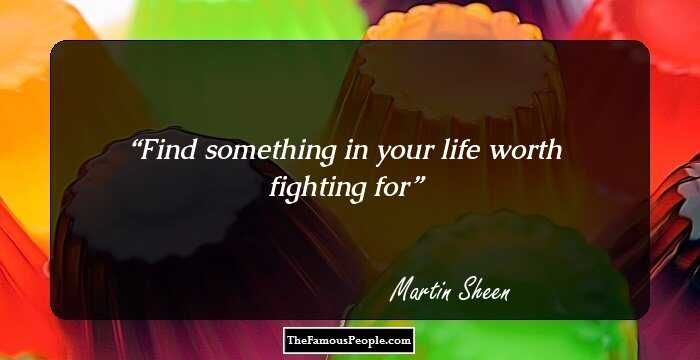 Find something in your life worth fighting for 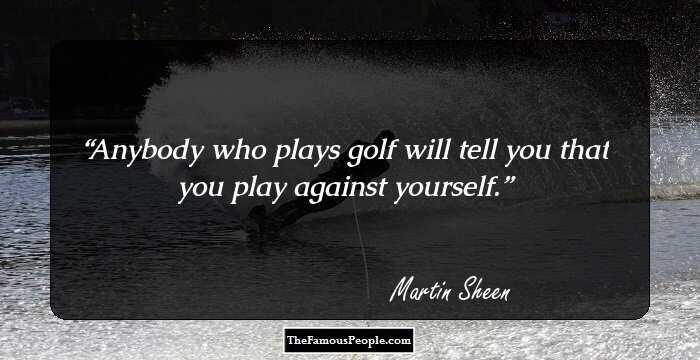 Anybody who plays golf will tell you that you play against yourself. 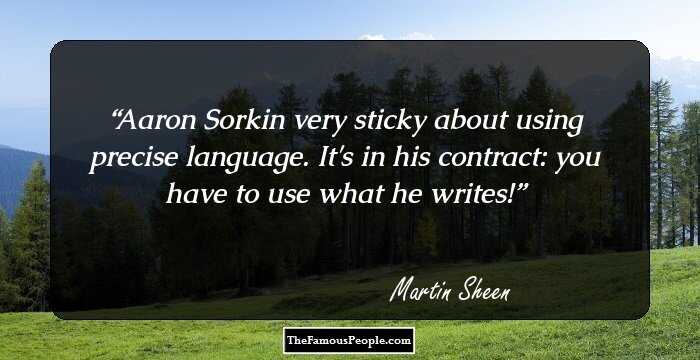 Aaron Sorkin very sticky about using precise language. It's in his contract: you have to use what he writes!

And there are so many people in the third world suffering so horribly right now, and we are so focused on ourselves and our culture that a lot of things are showing up in our culture that are making it impossible for us to focus on others. We're so self-focused.

Childhood hunger in America is as much a paradox as it is a tragedy. Why, in the wealthiest country in the world, should hunger darken the lives and dreams of 12 million children and their families? I believe that, when Americans learn the facts and understand how their involvement can make a difference, banishing childhood hunger will be a national, local and personal priority.

I am not a politician or a public servant. I am still a journeyman actor and a peace and justice activist. I'm a pilgrim trying to win my freedom and serve as best I can in the time I have, with this gift I've been given.

I don't have any conscious memory of wanting to be an actor, but early on, there was something in my makeup that I felt comfortable with. Then when I was around five or six, I started going to the movies and gradually it dawned on me that I was like one of those people on the screen. And that was it. There was never any question or doubt about what I was going to do for a living.

I never lost my faith...But like all modern Catholics, I felt for a time that I had outgrown the church. Now it is a bone of contention in my soul that I did not share my faith with my kids, as my parents did with me. It was a source of grace when I needed it. I have been greatly nurtured and inspired by my faith.