Famous As: Screenwriter, Novelist, Journalist, Writer, Essayist
Born On: December 5, 1934
Born In: Sacramento, California, United States
Age: 88 Years
Joan Didion is a prominent American journalist and writer renowned for her screenplays, novels and autobiographical works. She is distinguished for her memoirs and literary journalism. Her thoughts, work, writings, views, and opinions traverse the cultural chaos and disintegration of the countryâs morals. The preponderant theme of her works is social and individual fragmentation. She attained the zenith of success for her writings that defined American subcultures for conventional audiences. She bagged in âThe National Book Award for Nonfictionâ in 2005. She was also a finalist for, âPulitzer Prizeâ and âNational Book Critics Circle Awardâ for her book titled, âThe Year of Magical Thinkingâ. In order to celebrate the ways she helped us make sense of it all, we have compiled some quotable quotes and sayings by the prolific writer. Read through the quotes and thoughts by Joan Didion from whatever she has said or written in her legendary career.
Listed In:
Writers
Media Personalities 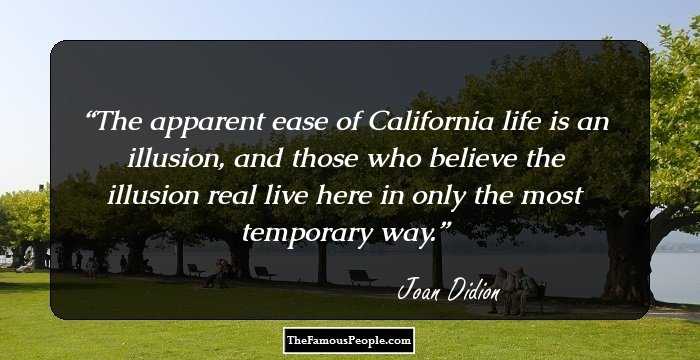 The apparent ease of California life is an illusion, and those who believe the illusion real live here in only the most temporary way. 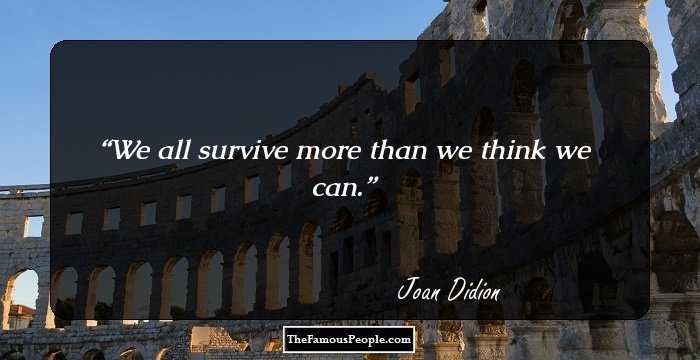 We all survive more than we think we can. 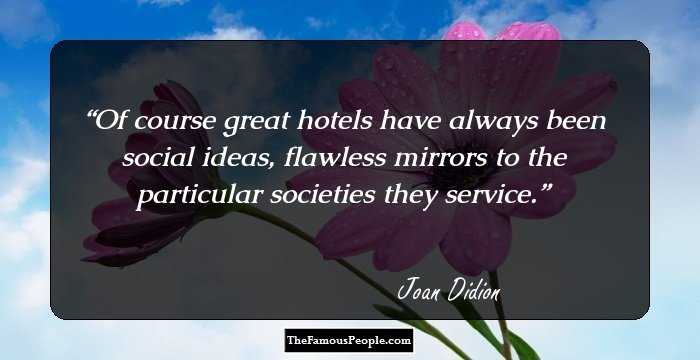 Of course great hotels have always been social ideas, flawless mirrors to the particular societies they service. 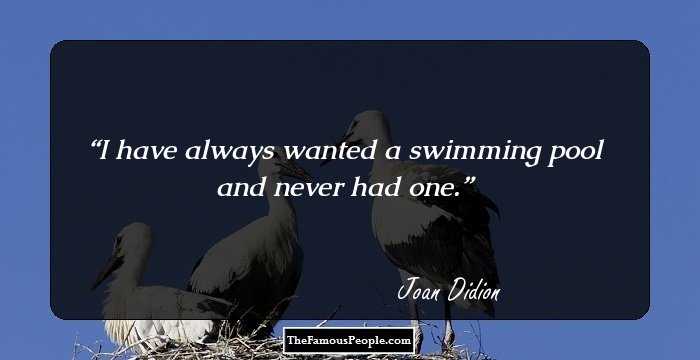 I have always wanted a swimming pool and never had one. 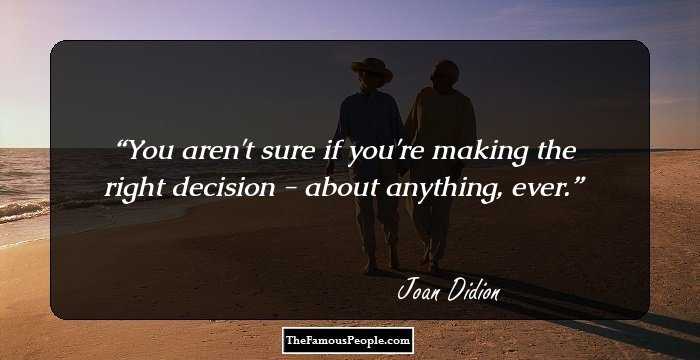 You aren't sure if you're making the right decision - about anything, ever. 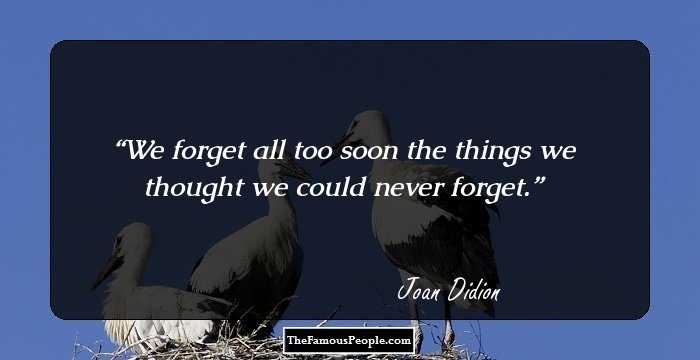 We forget all too soon the things we thought we could never forget. 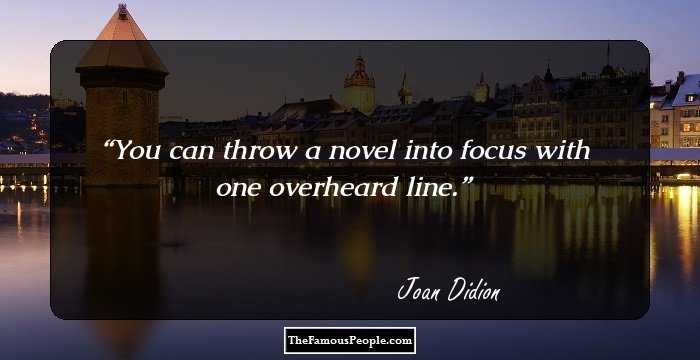 You can throw a novel into focus with one overheard line. 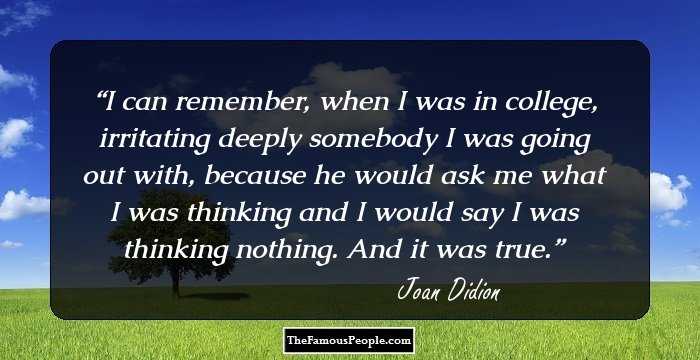 I can remember, when I was in college, irritating deeply somebody I was going out with, because he would ask me what I was thinking and I would say I was thinking nothing. And it was true. 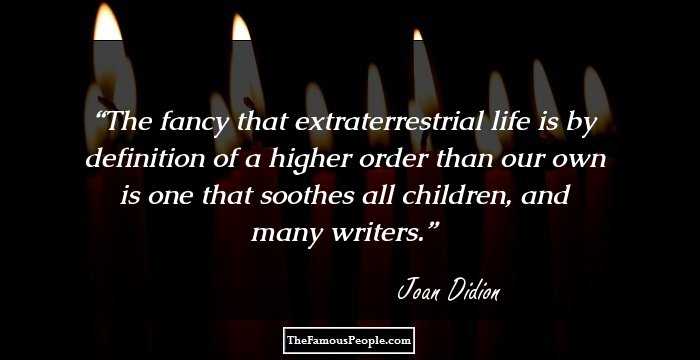 The fancy that extraterrestrial life is by definition of a higher order than our own is one that soothes all children, and many writers. 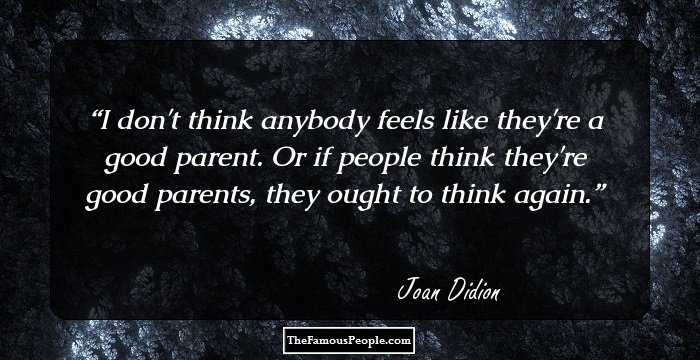 I don't think anybody feels like they're a good parent. Or if people think they're good parents, they ought to think again. 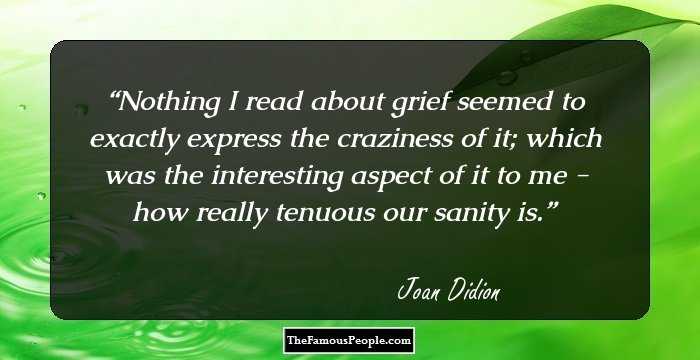 Nothing I read about grief seemed to exactly express the craziness of it; which was the interesting aspect of it to me - how really tenuous our sanity is. 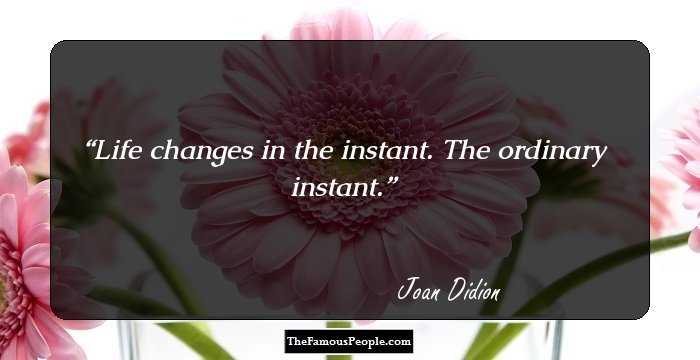 Life changes in the instant. The ordinary instant. 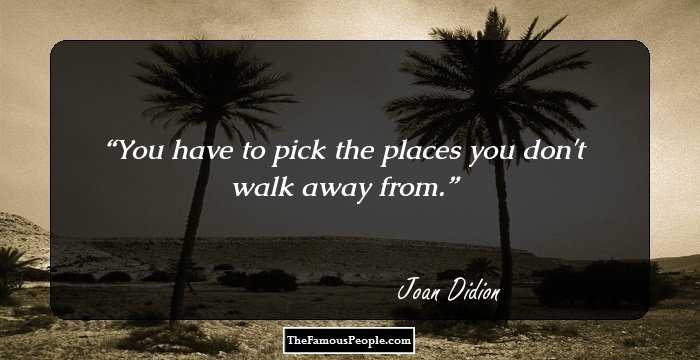 You have to pick the places you don't walk away from. 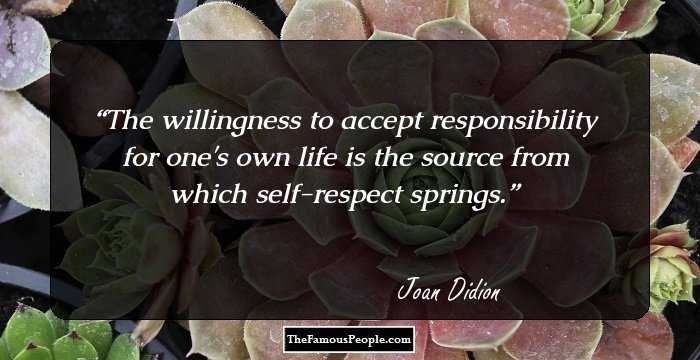 The willingness to accept responsibility for one's own life is the source from which self-respect springs. 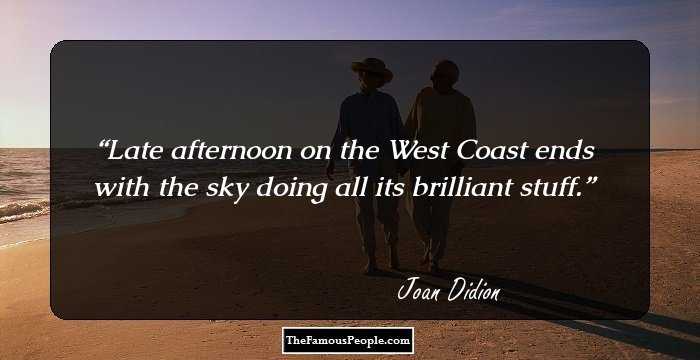 Late afternoon on the West Coast ends with the sky doing all its brilliant stuff. 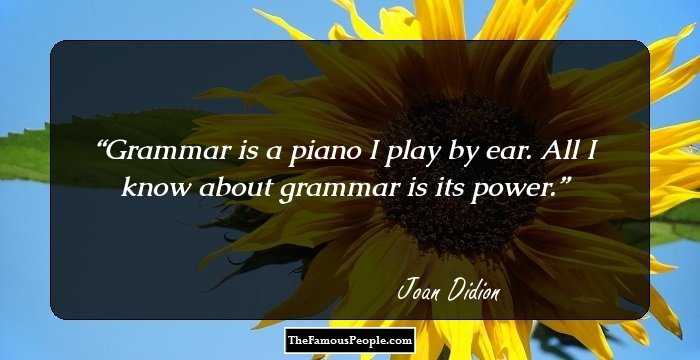 Grammar is a piano I play by ear. All I know about grammar is its power. 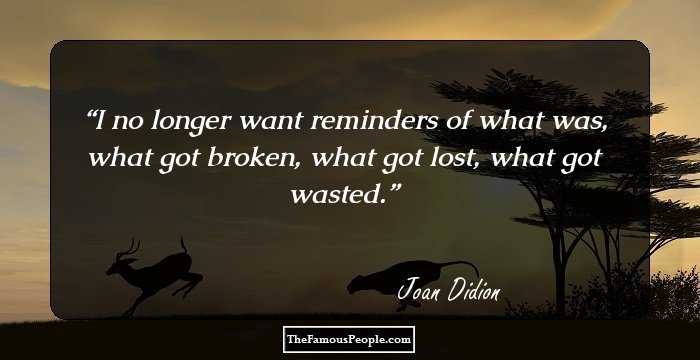 I no longer want reminders of what was, what got broken, what got lost, what got wasted. 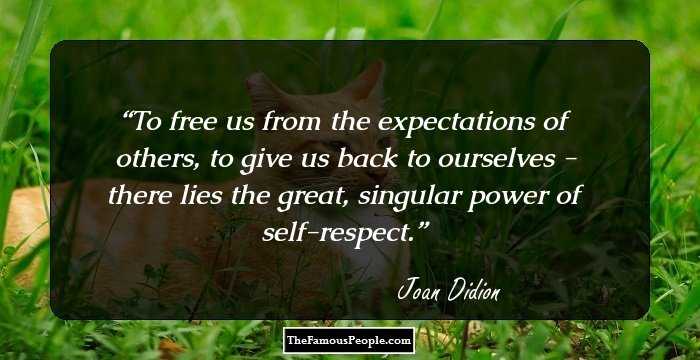 To free us from the expectations of others, to give us back to ourselves - there lies the great, singular power of self-respect. 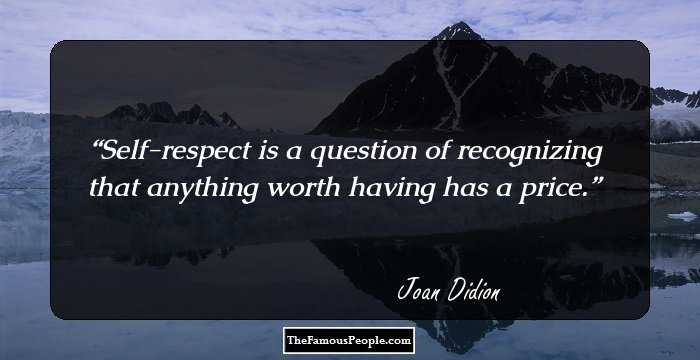 Self-respect is a question of recognizing that anything worth having has a price. 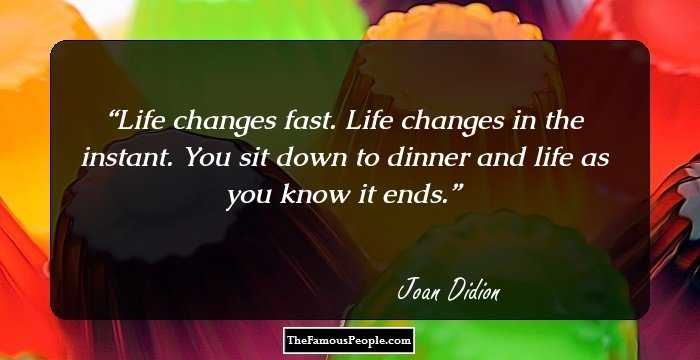 Life changes fast. Life changes in the instant. You sit down to dinner and life as you know it ends. 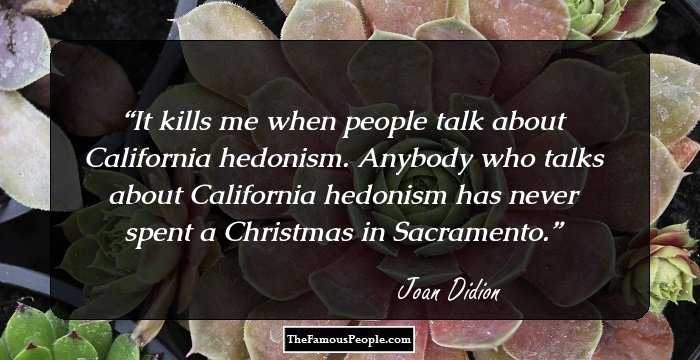 Yes, but another writer I read in high school who just knocked me out was Theodore Dreiser. I read An American Tragedy all in one weekend and couldn't put it down - I locked myself in my room. Now that was antithetical to every other book I was reading at the time because Dreiser really had no style, but it was powerful.

Writing nonfiction is more like sculpture, a matter of shaping the research into the finished thing. Novels are like paintings, specifically watercolors. Every stroke you put down you have to go with. Of course you can rewrite, but the original strokes are still there in the texture of the thing.

I think we are well advised to keep on nodding terms with the people we used to be, whether we find them attractive company or not. Otherwise they turn up unannounced and surprise us, come hammering on the mind's door at 4 A.M. of a bad night and demand to know who deserted them, who betrayed them, who is going to make amends.

I went on a book tour immediately after 9/11. I was due to leave the following Wednesday, so I just did. It was an amazing thing, because planes hadn't been flying very many days, and I got on this plane and went to San Francisco, and the minute that plane lifted above the clouds, I felt this incredible sense of lightness. 10 Thought-Provoking Quotes By Amiri Baraka For All Book Lovers