Famous As: Actress Best Known for Her Films 'Algiers', 'Lady of the Tropics' & 'Boom Town'
Born On: November 9, 1914
Died On: January 19, 2000
Born In: Vienna, Austria
Died At Age: 85
Hedy Lamarr was an illustrious Austrian-American film actress and inventor. Along with composerÂ George Antheil, she co-invented a radio guidance system, which used spread spectrum and frequency hopping technology.Â the technology for spread spectrum. She is considered one of the gorgeous actresses who ever embellished the silver screen. Some of her notable films include, âI Take This Womanâ, âSamson And Delilahâ, âAlgiersâ, âComrade Xâ, âEcstasyâ and âCome Live With Meâ amongst others. In 2014, Lamarr was also inducted into the âNational Inventors Hall Of Fameâ. She was a perfect example of beauty with brains. She was inclined towards scientific pursuits besides acting. We have compiled some famous quotable quotes and sayings by Hedy Lamarr on freedom, sleep, health, money, death, fear, boring, time, enemy, married, interesting, sports, science, inventions etc which have been excerpted from her movies, dialogues, work, thoughts, interviews and life. Following are some popular thoughts and quotations by Hedy Lamarr that will give you a glimpse of her beautiful mind.
Listed In:
Film & Theater Personalities
Actresses
Inventors 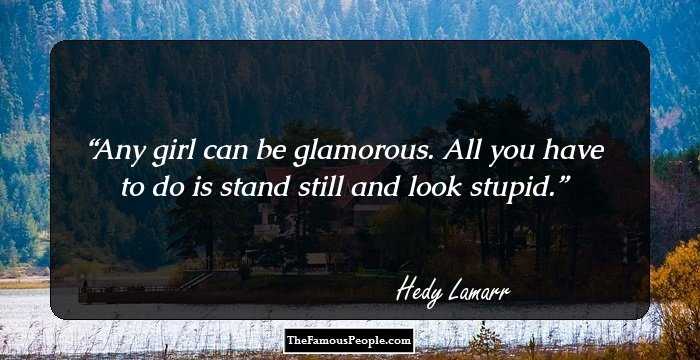 Any girl can be glamorous. All you have to do is stand still and look stupid. 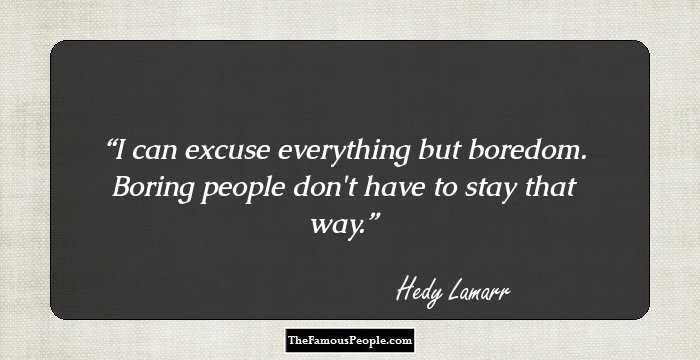 I can excuse everything but boredom. Boring people don't have to stay that way. 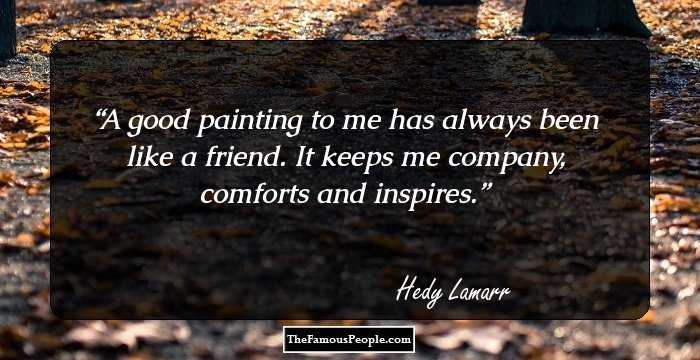 A good painting to me has always been like a friend. It keeps me company, comforts and inspires. 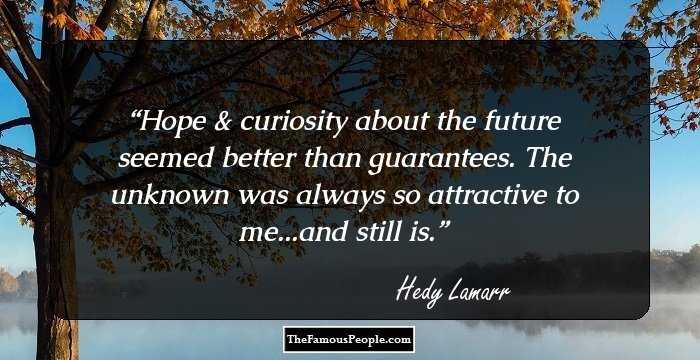 Hope & curiosity about the future seemed better than guarantees. The unknown was always so attractive to me...and still is. 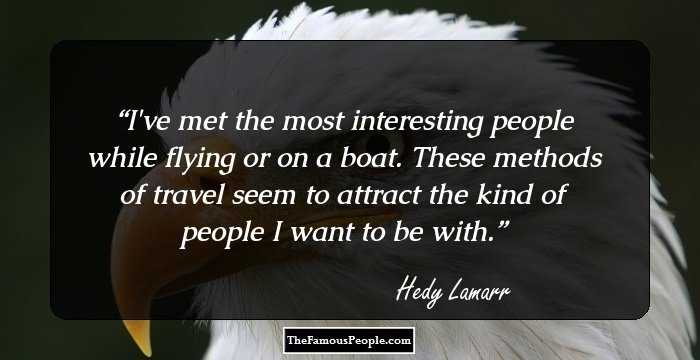 I've met the most interesting people while flying or on a boat. These methods of travel seem to attract the kind of people I want to be with. 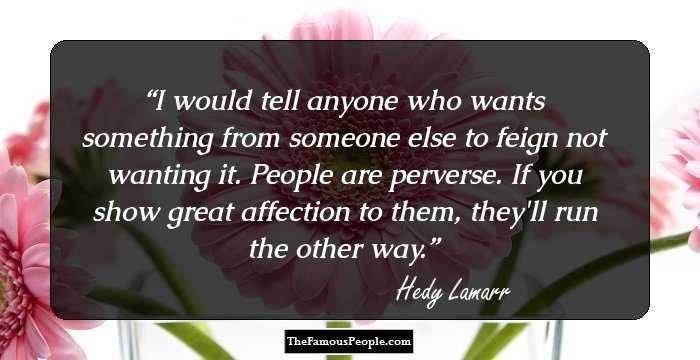 I would tell anyone who wants something from someone else to feign not wanting it. People are perverse. If you show great affection to them, they'll run the other way.

You I
Hedy Lamarr 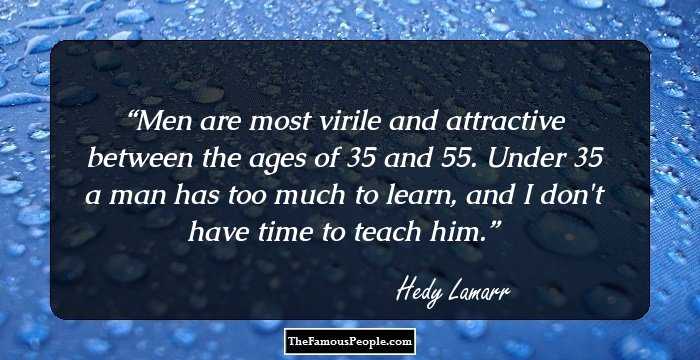 Men are most virile and attractive between the ages of 35 and 55. Under 35 a man has too much to learn, and I don't have time to teach him. 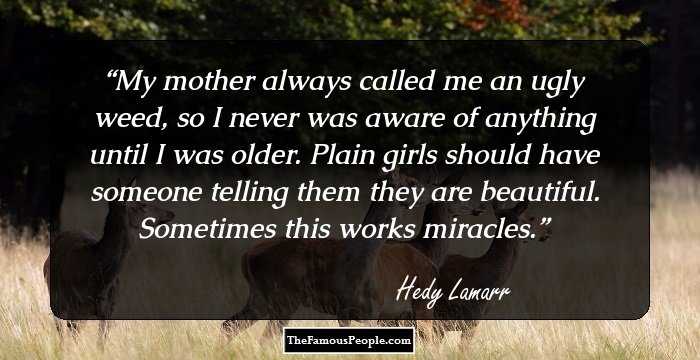 My mother always called me an ugly weed, so I never was aware of anything until I was older. Plain girls should have someone telling them they are beautiful. Sometimes this works miracles.

Me Never Beautiful I
Hedy Lamarr 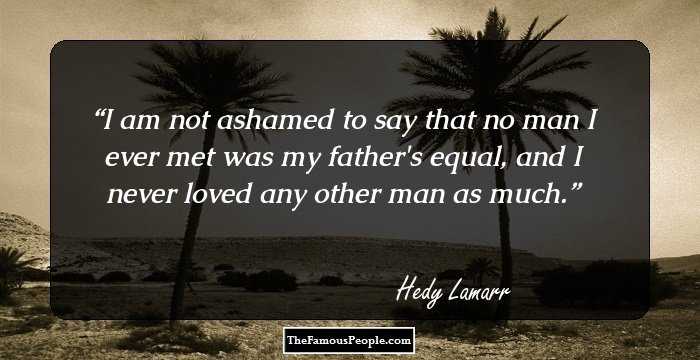 I am not ashamed to say that no man I ever met was my father's equal, and I never loved any other man as much. 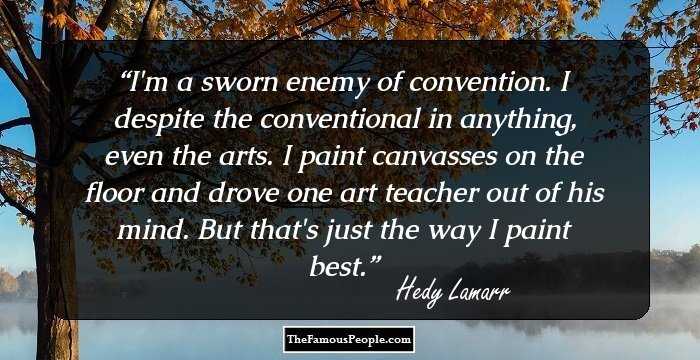 I'm a sworn enemy of convention. I despite the conventional in anything, even the arts. I paint canvasses on the floor and drove one art teacher out of his mind. But that's just the way I paint best. 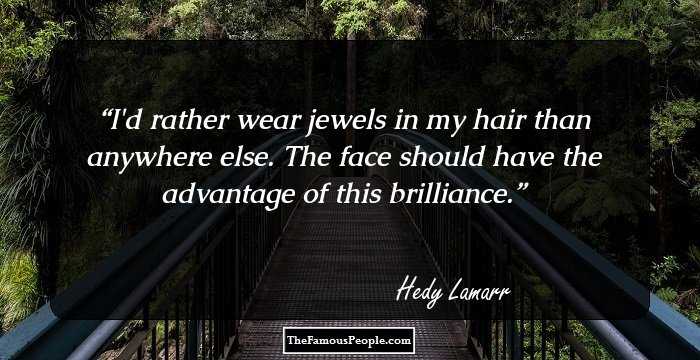 I'd rather wear jewels in my hair than anywhere else. The face should have the advantage of this brilliance.

I'm fifty-one years old, but I'm not through yet. I have lived a full life, and intend packing in quite a lot more. 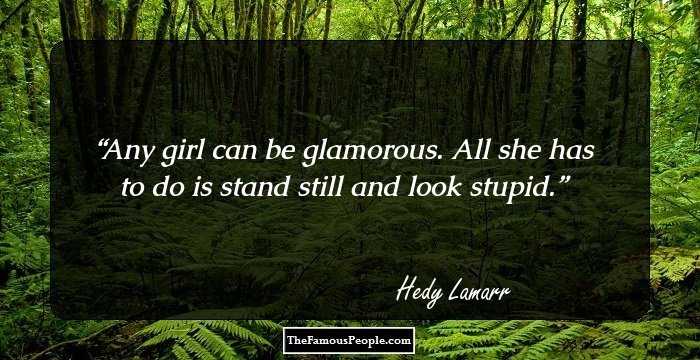 Any girl can be glamorous. All she has to do is stand still and look stupid. 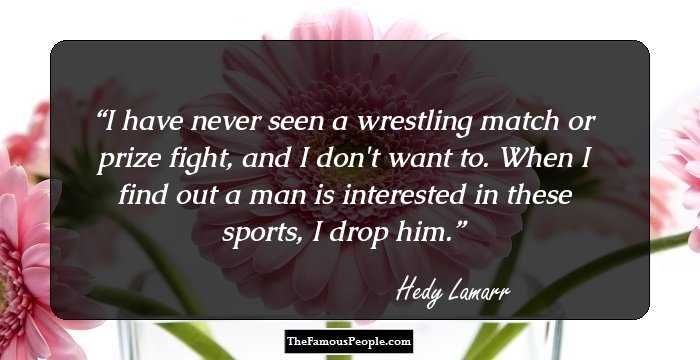 I have never seen a wrestling match or prize fight, and I don't want to. When I find out a man is interested in these sports, I drop him. 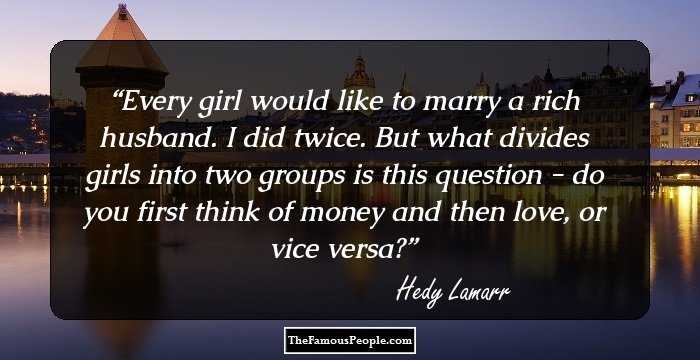 Every girl would like to marry a rich husband. I did twice. But what divides girls into two groups is this question - do you first think of money and then love, or vice versa? 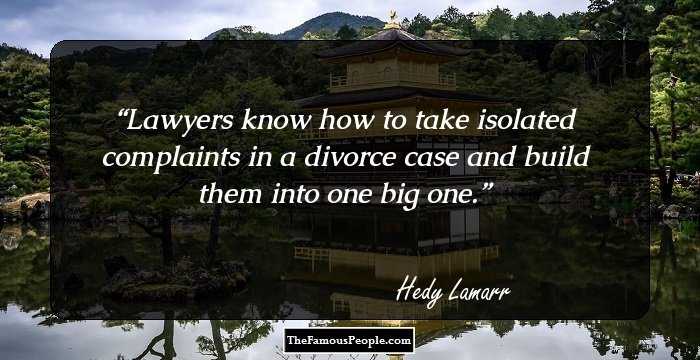 Lawyers know how to take isolated complaints in a divorce case and build them into one big one. 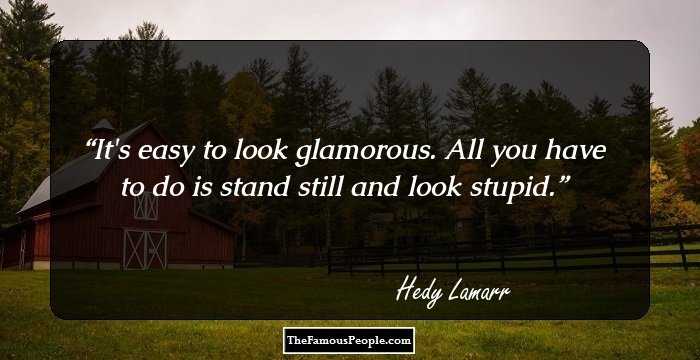 It's easy to look glamorous. All you have to do is stand still and look stupid. 241 Megan Fox Quotes That Will Leave You Speechless