27 Great Hamilton Wright Mabie Quotes That Will Surely Delight You

Famous As: Essayist
Born On: December 13, 1846
Died On: December 31, 1916
Born In: United States
Died At Age: 70
Hamilton Wright Mabie was a renowned American essayist, critic, and lecturer. He held a degree in law yet he was never inclined towards becoming a lawyer. During the year 1879, he started working for a weekly magazine, âChristian Unionâ that was later renamed as âThe Outlookâ in 1893, wherein he worked until his death. Later in 1884, he was appointed as associate editor of the same magazine. Seeing his works, he was elected into the âAuthors clubâ, which already had established authors like George Cary Eggleston, Richard Watson Gilder and Brander Mathews. Mabie has 23 literary works in his bag. He was very famous for his childrenâs books. âThe Life of the Spiritâ, âUnder Trees And Elsewhereâ, âThe Life Of The Spiritâ, âParables of Lifeâ and âBackgrounds Of Literatureâ are a few of his notable works. âMy Study Fireâ is a collection of his essays, which revolve around life, literature and nature. Following is a compilation of famous thoughts, quotes and views by Mabie that cover varied subjects. Go through the quotations and sayings by Hamilton Wright Mabie that are sure to leave a lasting impression.
Listed In:
Writers
Quotes by Famous People
Biographers 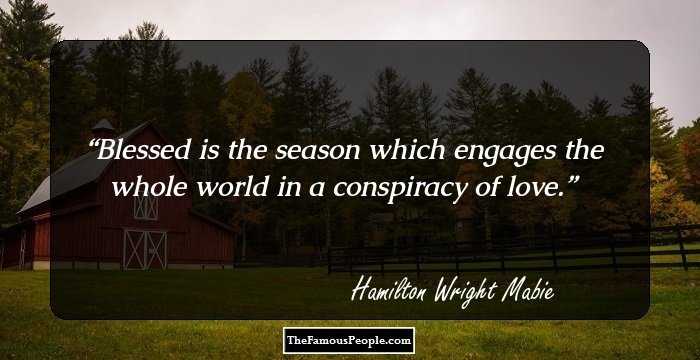 Blessed is the season which engages the whole world in a conspiracy of love.

The question for each man to settle is not what he would do if he had means, time, influence and educational advantages; the question is what he will do with the things he has. The moment a young man ceases to dream or to bemoan his lack of opportunities and resolutely looks his conditions in the face, and resolves to change them, he lays the corner-stone of a solid and honorable success. 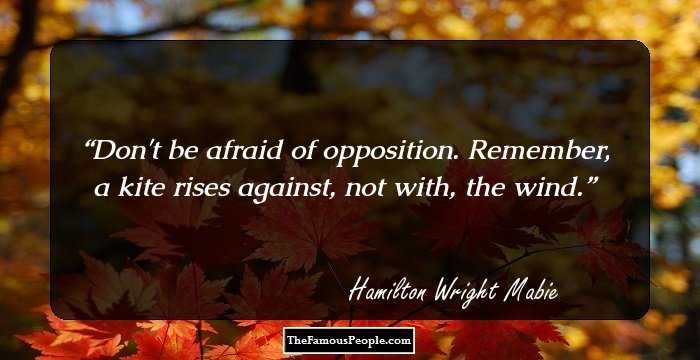 Don't be afraid of opposition. Remember, a kite rises against, not with, the wind.

New Year's eve is like every other night; there is no pause in the march of the universe, no breathless moment of silence among created things that the passage of another twelve months may be noted; and yet no man has quite the same thoughts this evening that come with the coming of darkness on other nights. 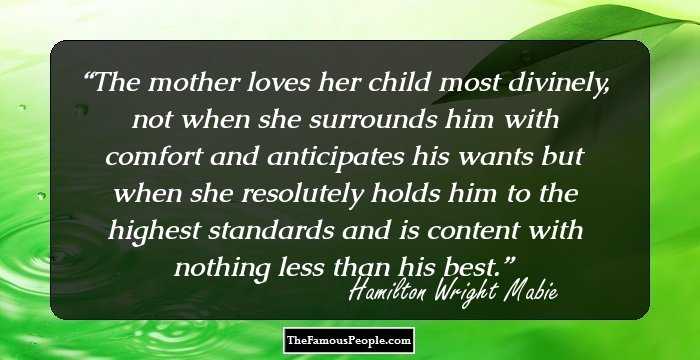 The mother loves her child most divinely, not when she surrounds him with comfort and anticipates his wants but when she resolutely holds him to the highest standards and is content with nothing less than his best.

Nothing is lost upon a man who is bent upon growth; nothing wasted on one who is always preparing for - life by keeping eyes, mind and heart open to nature, men, books, experience - and what he gathers serves him at unexpected moments in unforeseen ways. 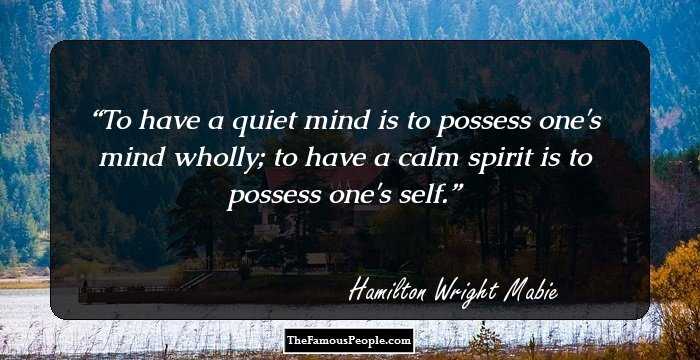 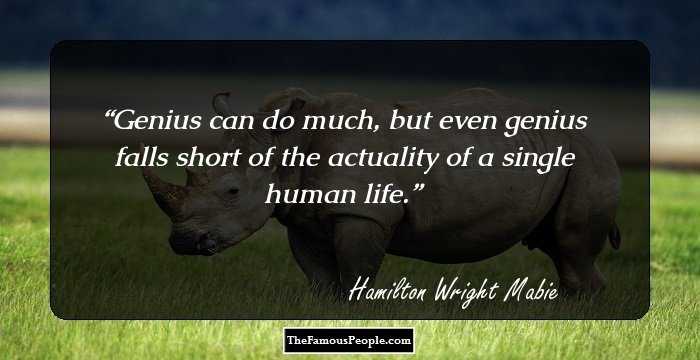 Genius can do much, but even genius falls short of the actuality of a single human life. 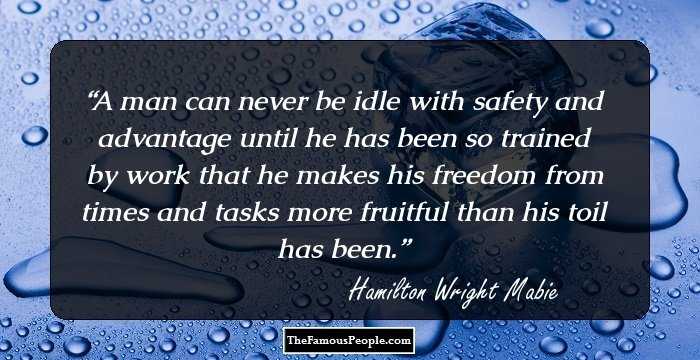 A man can never be idle with safety and advantage until he has been so trained by work that he makes his freedom from times and tasks more fruitful than his toil has been. 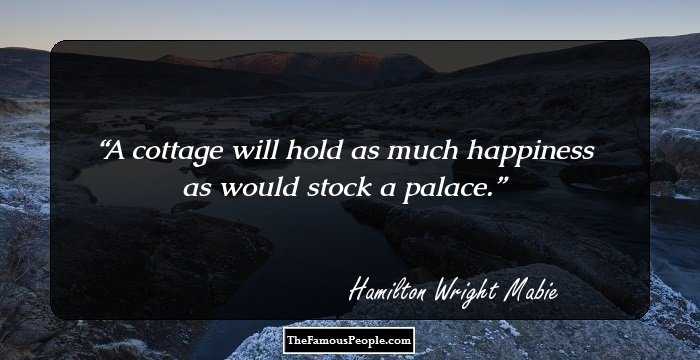 A cottage will hold as much happiness as would stock a palace. 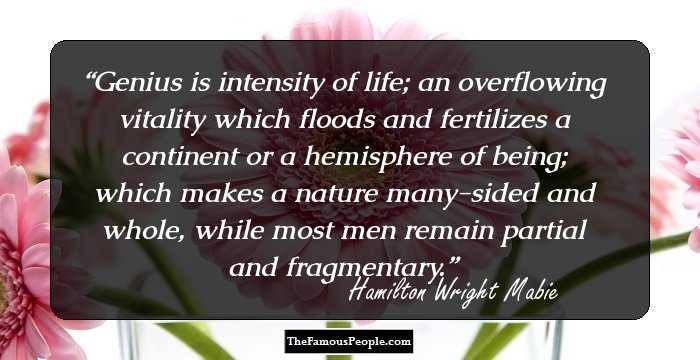 Genius is intensity of life; an overflowing vitality which floods and fertilizes a continent or a hemisphere of being; which makes a nature many-sided and whole, while most men remain partial and fragmentary. 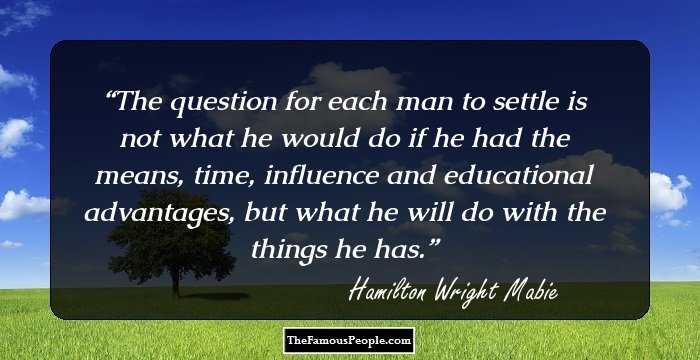 The question for each man to settle is not what he would do if he had the means, time, influence and educational advantages, but what he will do with the things he has.

I do not believe that the deeper problems of living can ever be answered by the process of thought. I believe that life itself teaches us either patience with regard to them, or reveals to us possible solutions when our hearts are pressed close against duties and sorrows and experiences of all kinds. 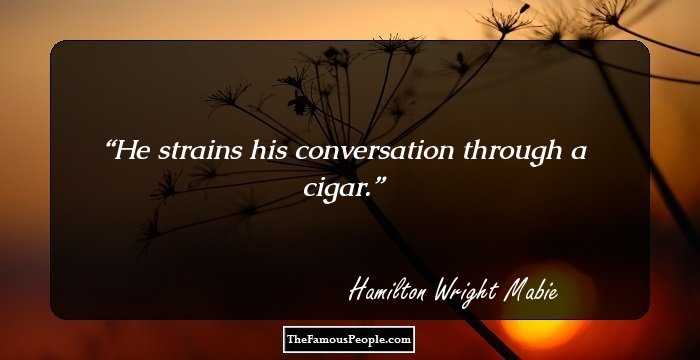 He strains his conversation through a cigar.

The test of friendship is its fidelity when every charm of fortune and environment has been spent away, and the bare, undraped character alone remains; if love still holds steadfast, and the joy of companionship survives in such an hour, the fellowship becomes a beautiful prophecy of immortality. 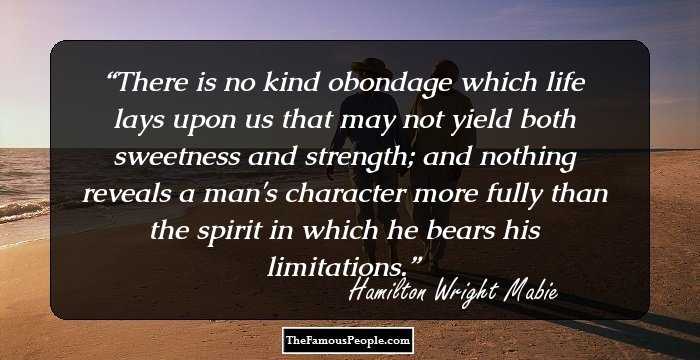 There is no kind obondage which life lays upon us that may not yield both sweetness and strength; and nothing reveals a man's character more fully than the spirit in which he bears his limitations. 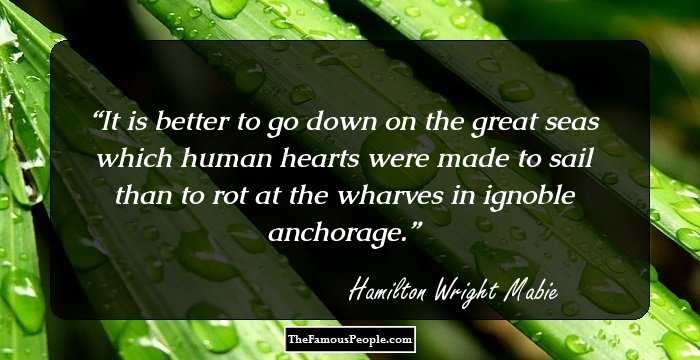 It is better to go down on the great seas which human hearts were made to sail than to rot at the wharves in ignoble anchorage. 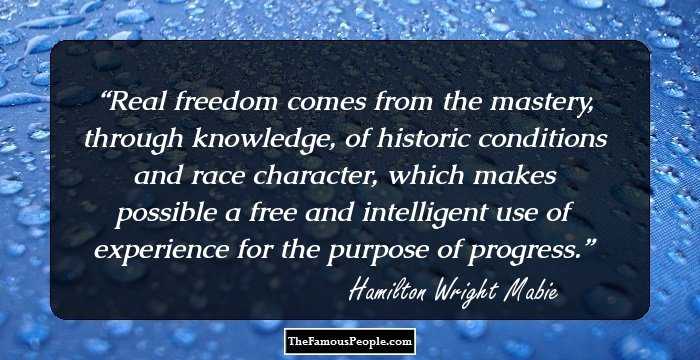 Real freedom comes from the mastery, through knowledge, of historic conditions and race character, which makes possible a free and intelligent use of experience for the purpose of progress.

The book of the moment often has immense vogue, while the book of the age, which comes in its company from the press, lies unnoticed; but the great book has its revenge. It lives to see its contemporary pushed up shelf by shelf until it finds its final resting-place in the garret or the auction room. 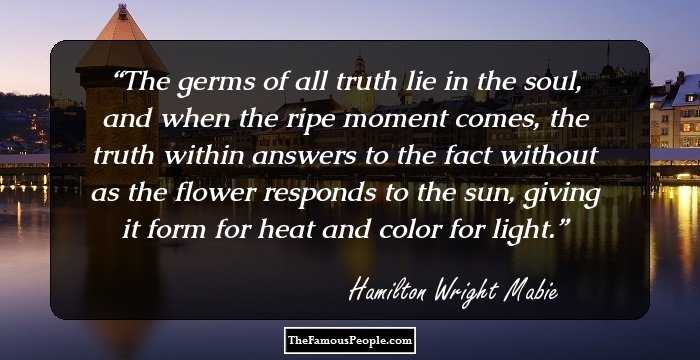 The germs of all truth lie in the soul, and when the ripe moment comes, the truth within answers to the fact without as the flower responds to the sun, giving it form for heat and color for light. 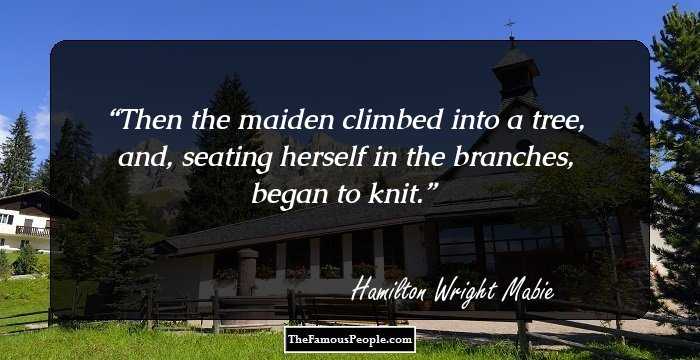 Then the maiden climbed into a tree, and, seating herself in the branches, began to knit. 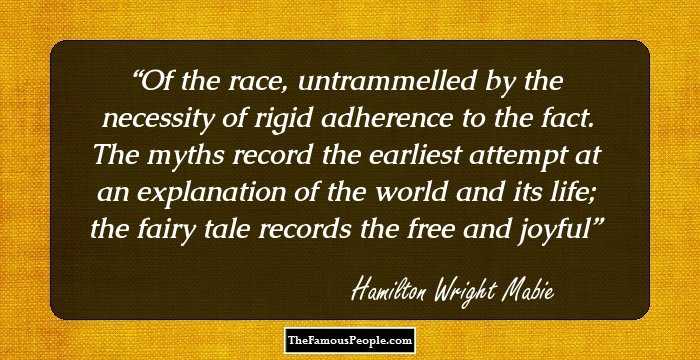 Of the race, untrammelled by the necessity of rigid adherence to the fact. The myths record the earliest attempt at an explanation of the world and its life; the fairy tale records the free and joyful 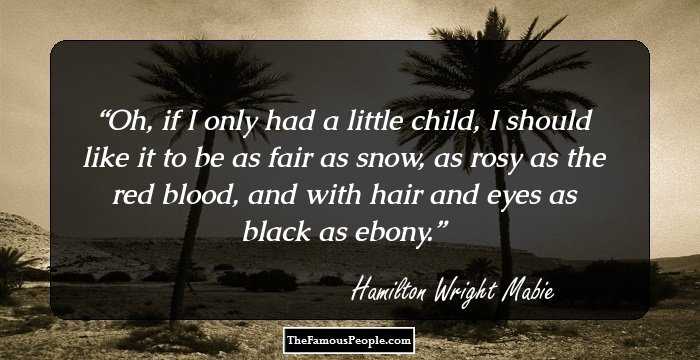 Oh, if I only had a little child, I should like it to be as fair as snow, as rosy as the red blood, and with hair and eyes as black as ebony. 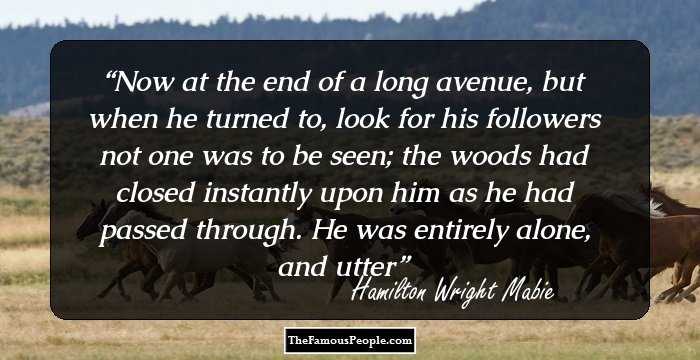 Now at the end of a long avenue, but when he turned to, look for his followers not one was to be seen; the woods had closed instantly upon him as he had passed through. He was entirely alone, and utter 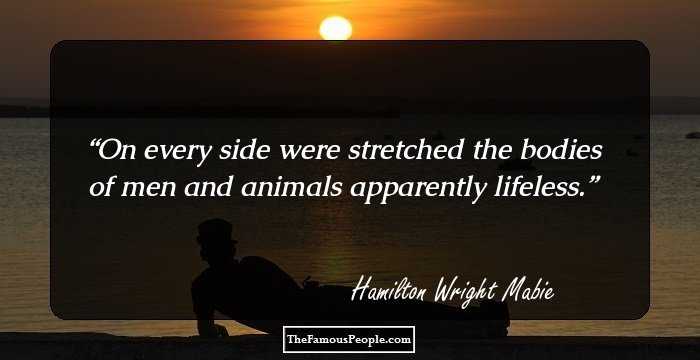 On every side were stretched the bodies of men and animals apparently lifeless. 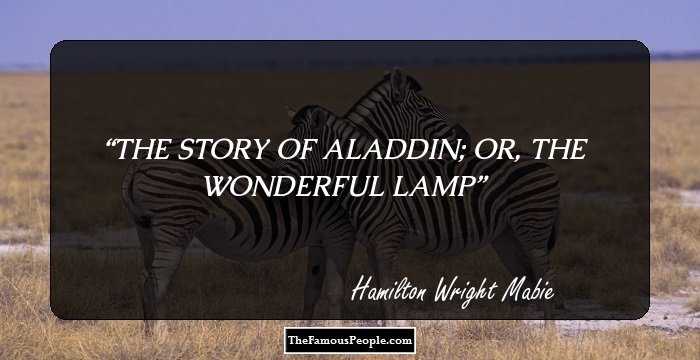 THE STORY OF ALADDIN; OR, THE WONDERFUL LAMP 129 Insightful Quotes By T.D Jakes That Will Ignite Your Heart And Soul