Famous As: Best Known for Playing 'Zorro' in the Eponymous Film Series
Born On: August 10, 1960
Born In: MÃ¡laga, Spain
Age: 61 Years
Antonio Banderas is a well-known Spanish singer, actor, producer, and director. He started his acting career with a series of films which were directed by Pedro Almodovar. In 1990s, he was seen in several high-profile Hollywood movies including, âThe Mask of Zoro,â âAssassins,â âInterview with the Vampire,â âSpy Kids,â âDesperado,â and âPhiladelphiaâ amongst various others. He has also lent his voice in the âShrek sequels.' Banderas was introduced to Hollywood by Madonna. He also made an appearance in a video supporting the âSpanish Socialist Workersâ Partyâ along with other renowned figures of Spanish culture. Following is a list of notable sayings and quotes by Antonio Banderas, which have been excerpted from his movies, dialogues, thoughts, interviews, utterances, songs, TV shows, tweets, lyrics, works, and life. Take a look at some famous quotes and thoughts by Antonio Banderas!
Listed In:
Actors
Film & Theater Personalities 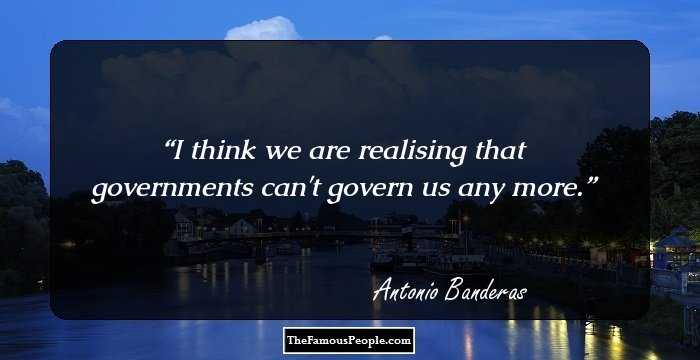 I think we are realising that governments can't govern us any more. 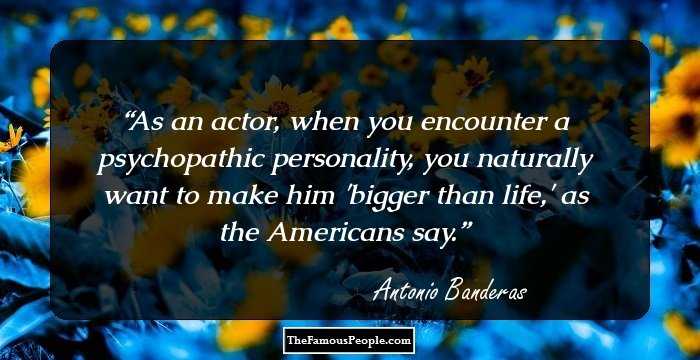 As an actor, when you encounter a psychopathic personality, you naturally want to make him 'bigger than life,' as the Americans say. 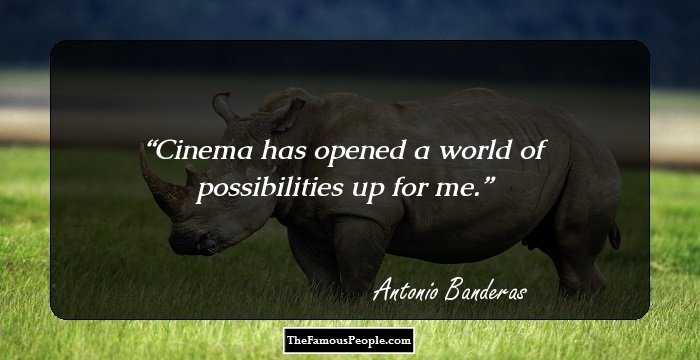 Cinema has opened a world of possibilities up for me. 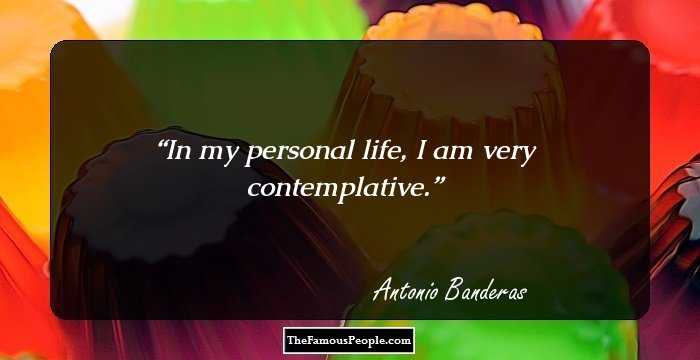 In my personal life, I am very contemplative. 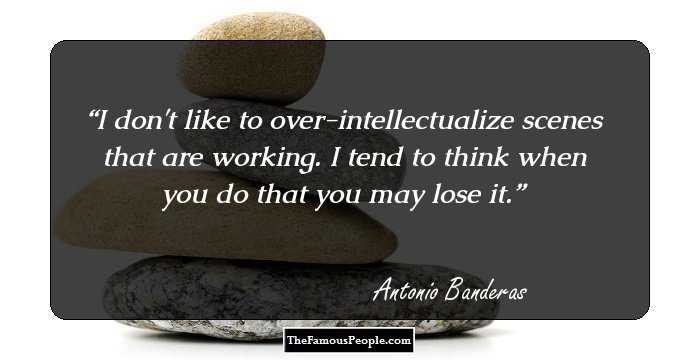 I don't like to over-intellectualize scenes that are working. I tend to think when you do that you may lose it. 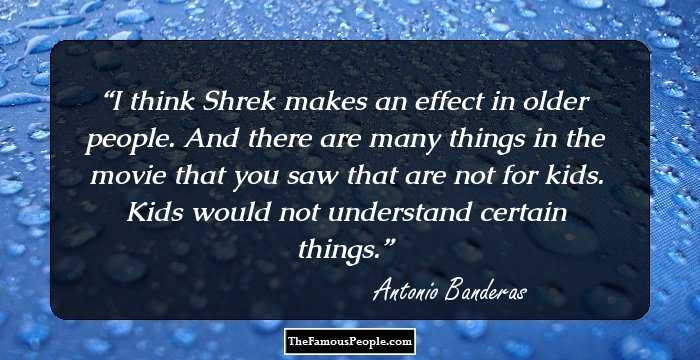 I think Shrek makes an effect in older people. And there are many things in the movie that you saw that are not for kids. Kids would not understand certain things. 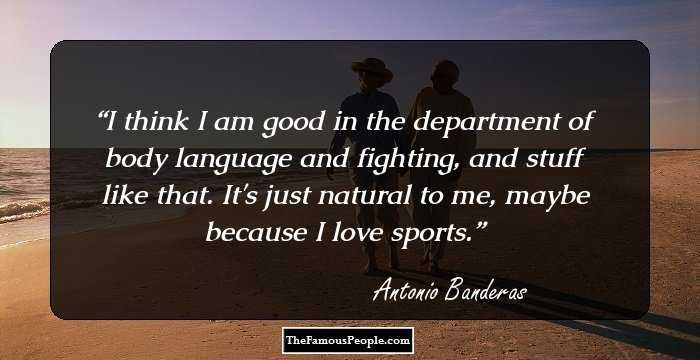 I think I am good in the department of body language and fighting, and stuff like that. It's just natural to me, maybe because I love sports. 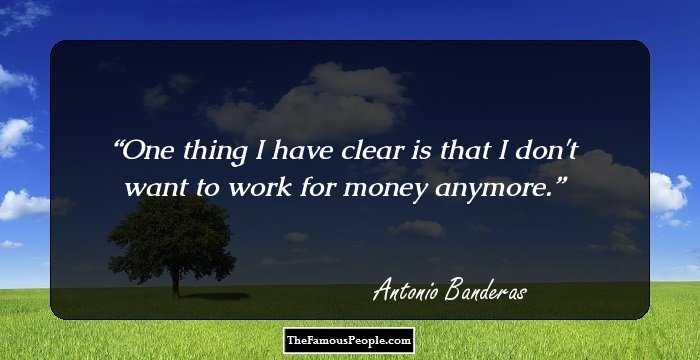 One thing I have clear is that I don't want to work for money anymore. 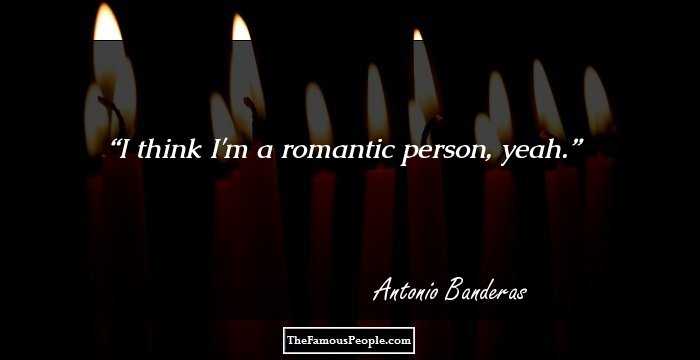 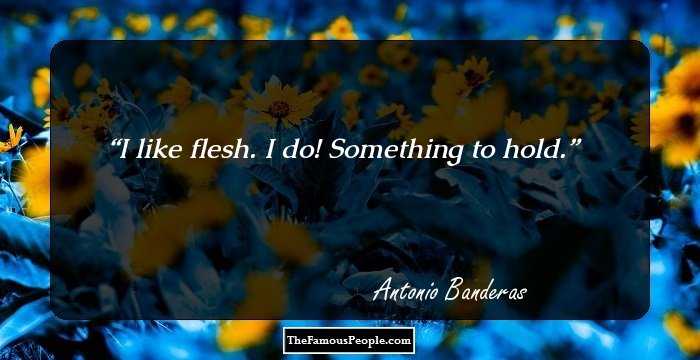 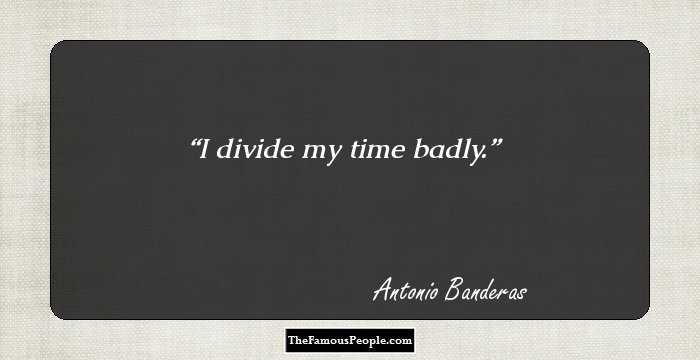 I divide my time badly. 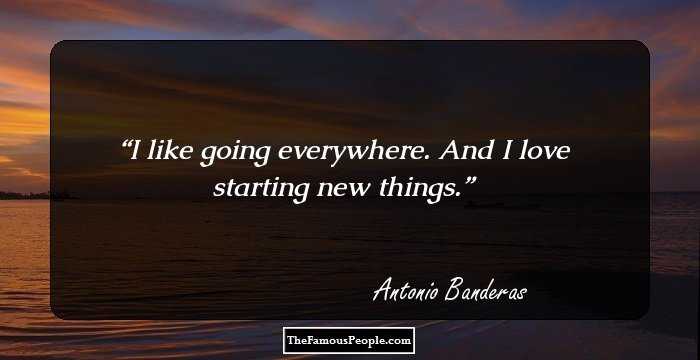 I like going everywhere. And I love starting new things. 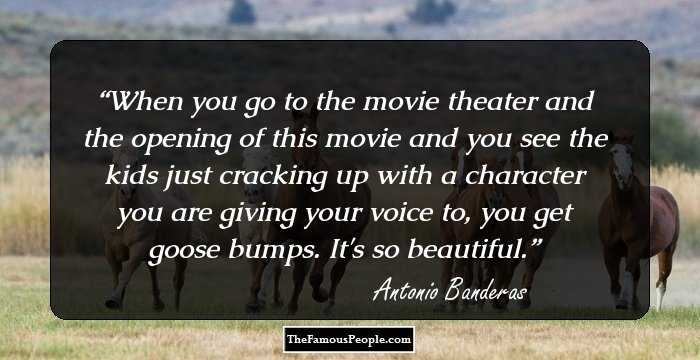 When you go to the movie theater and the opening of this movie and you see the kids just cracking up with a character you are giving your voice to, you get goose bumps. It's so beautiful. 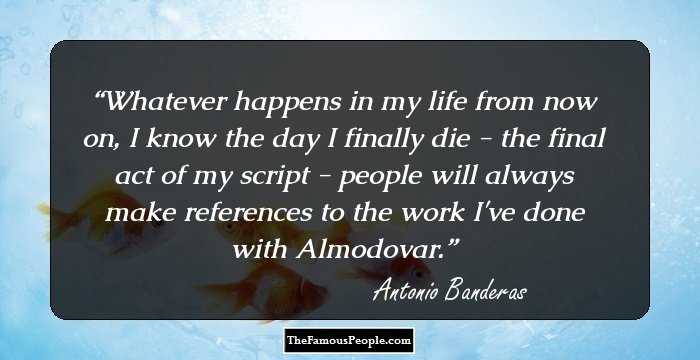 Whatever happens in my life from now on, I know the day I finally die - the final act of my script - people will always make references to the work I've done with Almodovar. 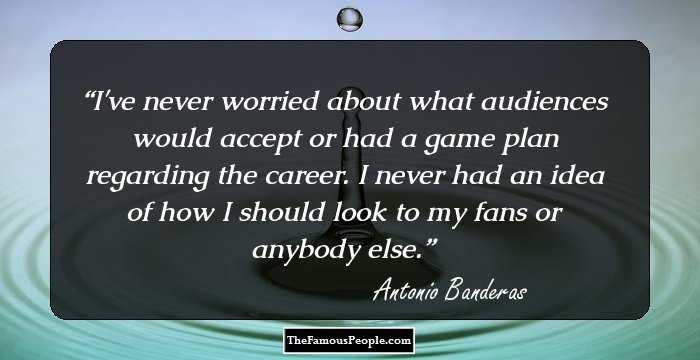 I've never worried about what audiences would accept or had a game plan regarding the career. I never had an idea of how I should look to my fans or anybody else.

I remember in 'Law of Desire,' where I played a homosexual, that people were more upset that I kissed a man on the mouth than I killed a man. It's interesting to see how people can pardon you for murdering a man, but they can't pardon you for kissing one.

As much as you know it, and you know the method, you can pretty much do what you want. No idea is going to be shot down. You just put it in the garbage later. You have to say the lines in many different ways. So they have a lot of material to work.

Sometimes I am just playing the character. I will move out of the way of the microphone, and they will have to tell me. Because I am moving around a lot. I am performing the cat. The animators look for that material, to see if they can put it back into the movie.

Listen, I think movies serve many different purposes, from those movies that are frivolous and just an entertainment, to movies that just go to exploring the complexities of the human soul. Everything is valid if it's done with honesty and dignity, and I actually do both of those types of movies in my career. 69 Javier Bardem Quotes To Ponder Over