Famous As: Journalist, Writer
Born On: November 20, 1908
Died On: March 30, 2004
Born In: Salford, Lancashire, England
Died At Age: 95
Alistair Cooke was a distinguished British-American broadcaster, journalist, and television personality. His journalistic output included âAlistair Cookeâs Americaâ and âLetter from America.â Besides this, he was also renowned as the host of PBS âMasterpiece Theatre.â He held his job for more than two decades and worked in television for four decades. He received an âhonorary knighthoodâ in 1973. A number of coffee table books were also co-authored by Cooke. Some of his famous works include âReporting America: The Life of a Nation,â âOne Manâs America,â âThe Marvellous Mania: Alistair Cooke on Golfâ etc. We have rounded some well-known sayings and quotes by Alistair Cooke that are sure to delight you. Read through the corpus of interesting thoughts and quotes by Alistair Cooke.
Listed In:
Writers
Media Personalities

In the best of times, our days are numbered anyway. So it would be a crime against nature for any generation to take the world crisis so solemnly that it put off enjoying those things for which we were designed in the first place: the opportunity to do good work, to enjoy friends, to fall in love, to hit a ball, and to bounce a baby. 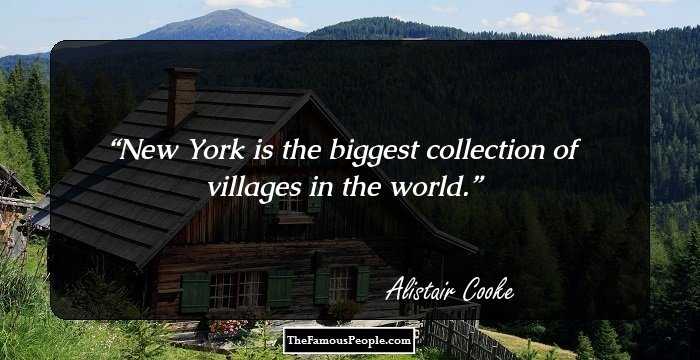 New York is the biggest collection of villages in the world. 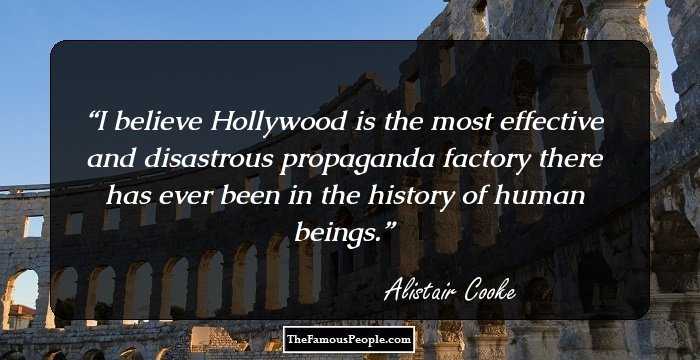 I believe Hollywood is the most effective and disastrous propaganda factory there has ever been in the history of human beings. 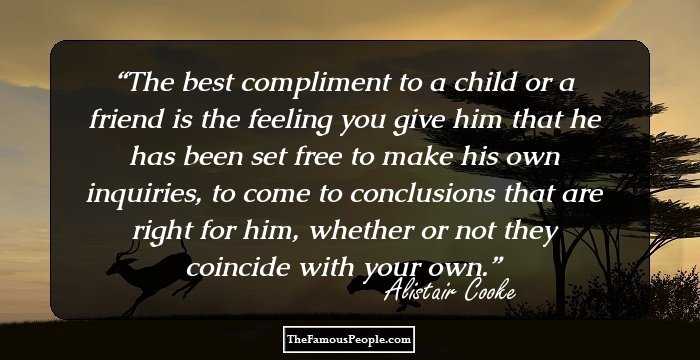 The best compliment to a child or a friend is the feeling you give him that he has been set free to make his own inquiries, to come to conclusions that are right for him, whether or not they coincide with your own.

All Presidents start out to run a crusade but after a couple of years they find they are running something less heroic and much more intractable: namely the presidency. The people are well cured by then of election fever, during which they think they are choosing Moses. In the third year, they look on the man as a sinner and a bumble and begin to poke around for rumors of another Messiah. 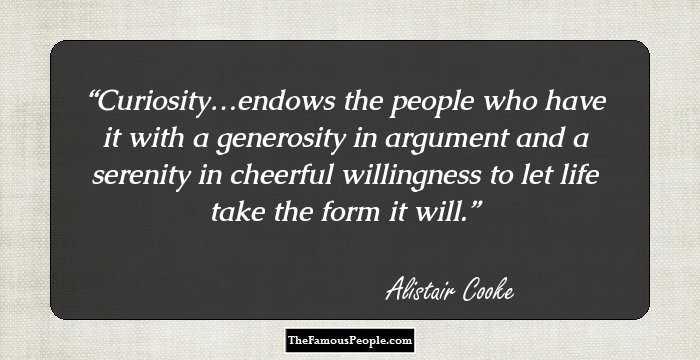 Curiosityâ¦endows the people who have it with a generosity in argument and a serenity in cheerful willingness to let life take the form it will.

To watch an American on a beach or crowding into a subway, or buying a theater ticket, or sitting at home with his radio on, tells you something about one aspect of the American character: the capacity to withstand a great deal of outside interference, so to speak; a willing acceptance of frenzy which though it's never self-conscious, amounts o a willingness to let other people have and assert their own lively, and even offensive, character. They are a tough race in this. 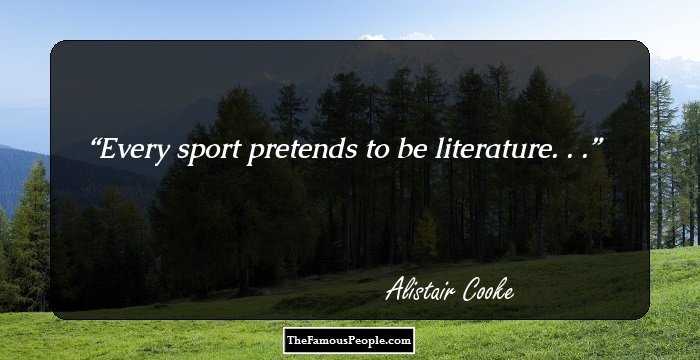 Every sport pretends to be literature. . . 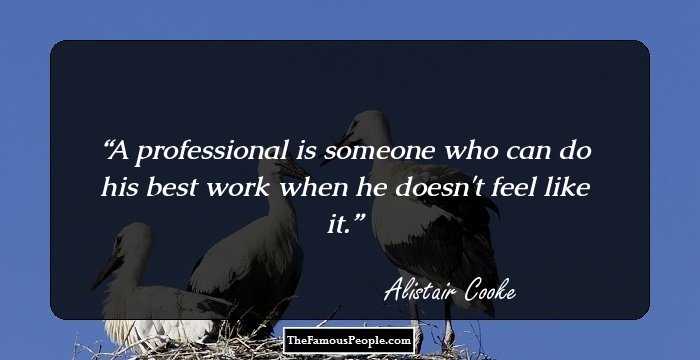 A professional is someone who can do his best work when he doesn't feel like it. 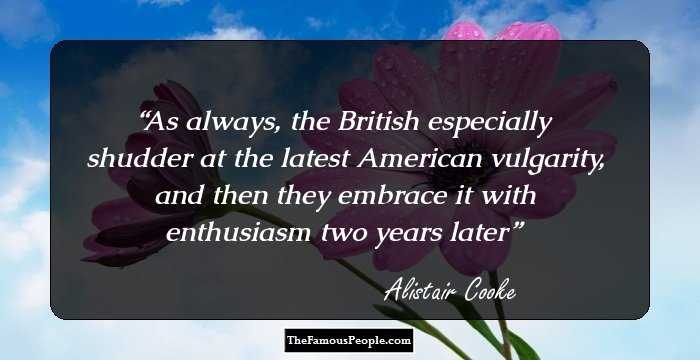 As always, the British especially shudder at the latest American vulgarity, and then they embrace it with enthusiasm two years later 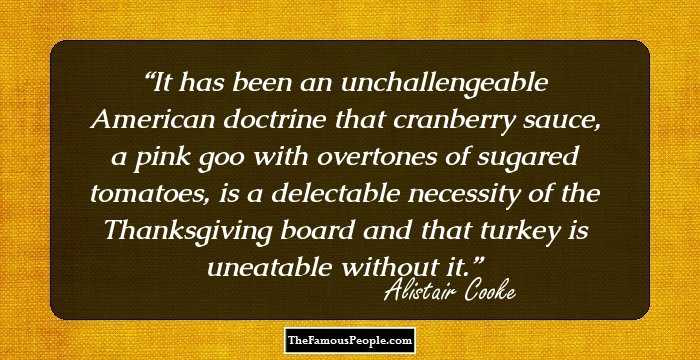 It has been an unchallengeable American doctrine that cranberry sauce, a pink goo with overtones of sugared tomatoes, is a delectable necessity of the Thanksgiving board and that turkey is uneatable without it. 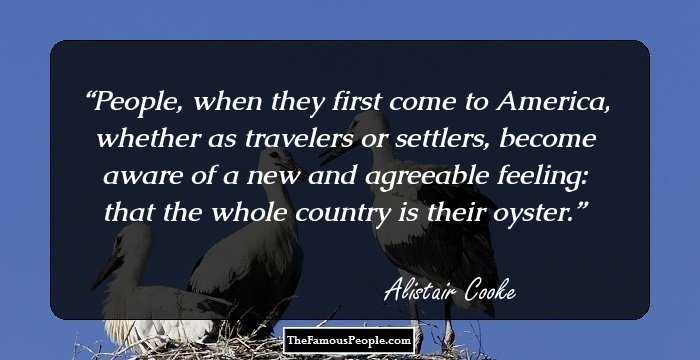 People, when they first come to America, whether as travelers or settlers, become aware of a new and agreeable feeling: that the whole country is their oyster. 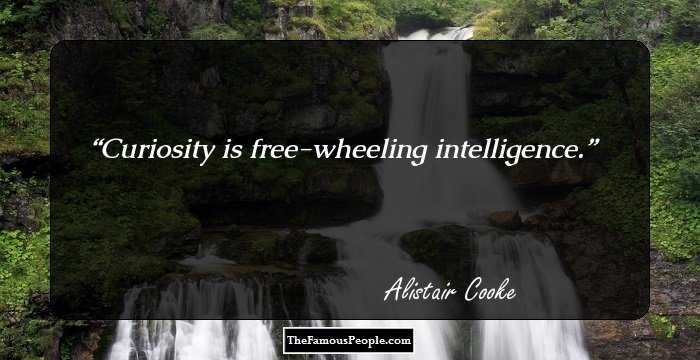 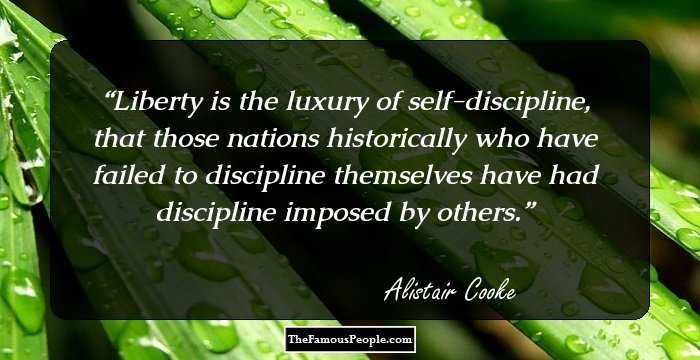 Liberty is the luxury of self-discipline, that those nations historically who have failed to discipline themselves have had discipline imposed by others. 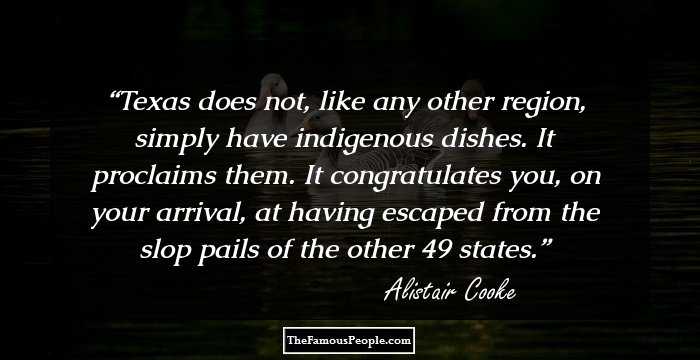 Texas does not, like any other region, simply have indigenous dishes. It proclaims them. It congratulates you, on your arrival, at having escaped from the slop pails of the other 49 states. 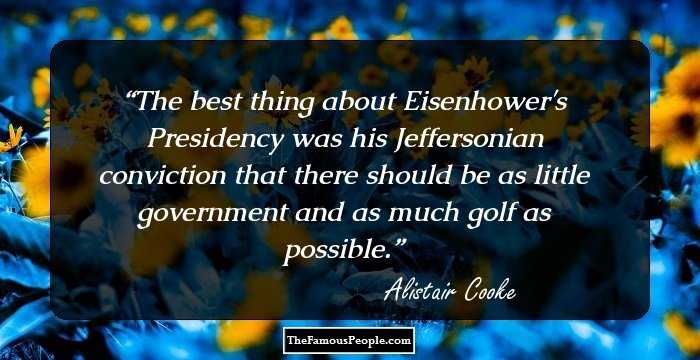 The best thing about Eisenhower's Presidency was his Jeffersonian conviction that there should be as little government and as much golf as possible. 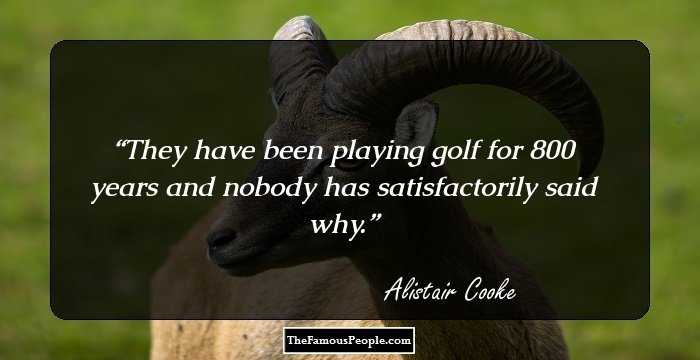 They have been playing golf for 800 years and nobody has satisfactorily said why. 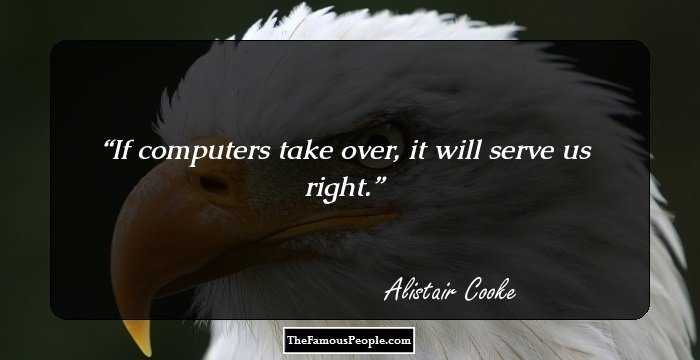 If computers take over, it will serve us right. 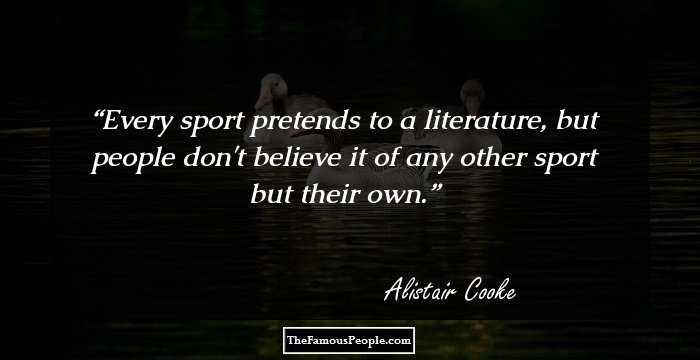 Every sport pretends to a literature, but people don't believe it of any other sport but their own. 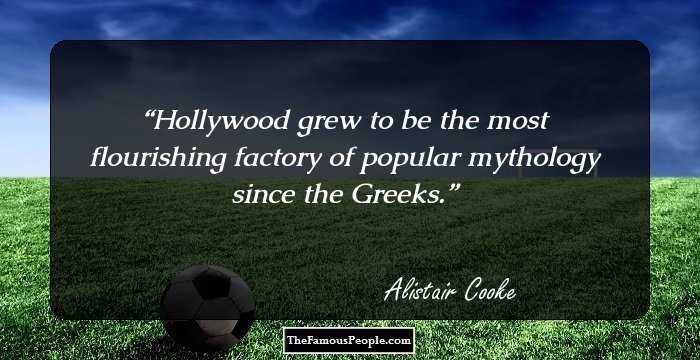 Hollywood grew to be the most flourishing factory of popular mythology since the Greeks. 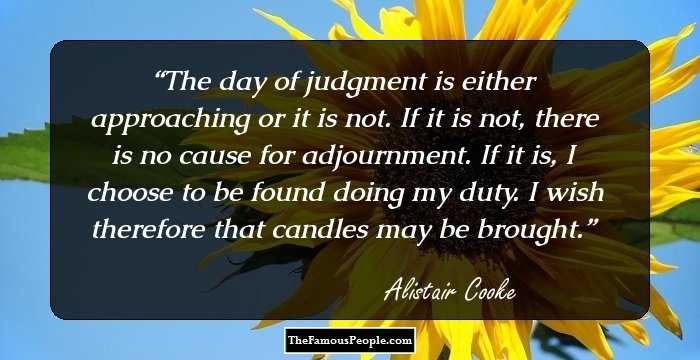 The day of judgment is either approaching or it is not. If it is not, there is no cause for adjournment. If it is, I choose to be found doing my duty. I wish therefore that candles may be brought. 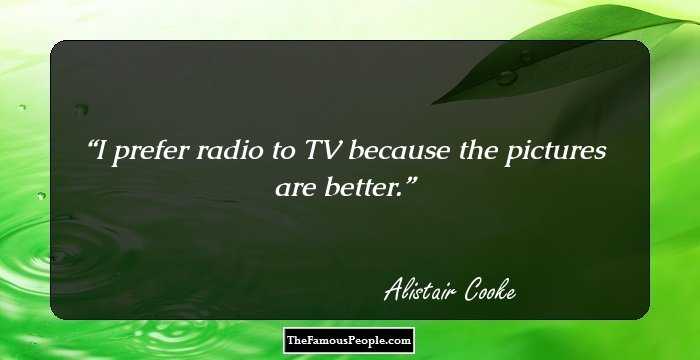 I prefer radio to TV because the pictures are better. 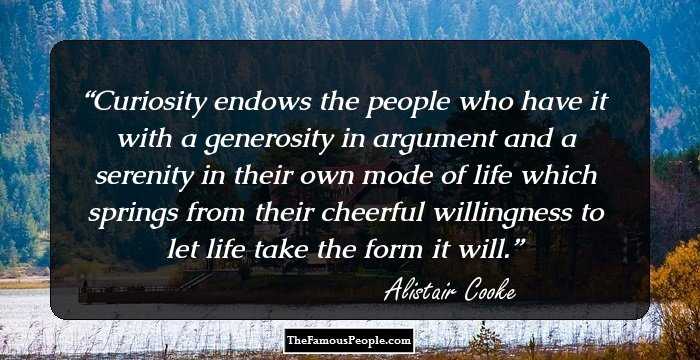 Curiosity endows the people who have it with a generosity in argument and a serenity in their own mode of life which springs from their cheerful willingness to let life take the form it will.

It is a wonderful tribute to the game or to the dottiness of the people who play it that for some people somewhere there is no such thing as an insurmountable obstacle, an unplayable course, the wrong time of the day or year.

But afterall it's not the winning that matters, is it? Or is it? It'sto coinawordtheamenitiesthatcount: thesmell of the dandelions, the puff of the pipe, the click of the bat, the rain on the neck, the chill down the spine, the slow, exquisite coming on of sunset and dinner and rheumatism. 13 Thought-Provoking Robert Stone Quotes You Will Swear By 25 Inspiring Quotes By Alexander Woollcott That You Cannot Ignore