Famous As: American Activist in the Civil Rights Movement Best Known for Her Pivotal Role in the Montgomery Bus Boycott
Born On: February 4, 1913
Died On: October 24, 2005
Born In: Tuskegee, Alabama, United States
Died At Age: 92
Rosa Parks was an activist known to have played a pivotal role in the Civil Rights Movement. She hogged limelight when she refused to vacate her seat for a white man. This created a nationwide revolution against the discrimination followed in public facilities. She was born in a family of former slaves which made her face the heat of racial discrimination since an early age. She had to go through various other hardships to complete her education. She also served in petty jobs as the elite jobs were reserved for the whites. During her time, the Montgomery City Code ruled out that the Blacks should be confined to the back side of the buses. This led to a protest backed by the âNational Association for the Advancement of Colored People (NAACP)â as they protested for Montgomery Bus Boycott. Parks moved to Detroit with her family to serve as a secretary at the congressional office. She further joined the board âPlanned Parenthood Federation of Americaâ which encouraged her to open a self-development institute. She was honored with the most reputed âMartin Luther King Jr. Awardâ and the âPresidential Medal of Freedomâ. Rosa inspired generations with her remarkable work and struggle. Following is a compilation of sayings and quotations by the renowned activist. Read through the notable quotes and thought by Rosa Parks that will motivate and inspire you.
Listed In:
Activists
Civil Rights Activists 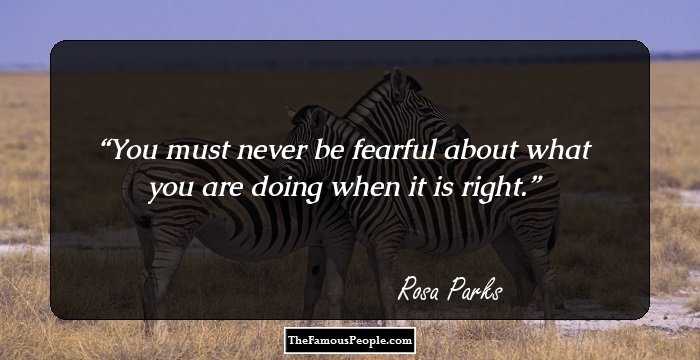 You must never be fearful about what you are doing when it is right. 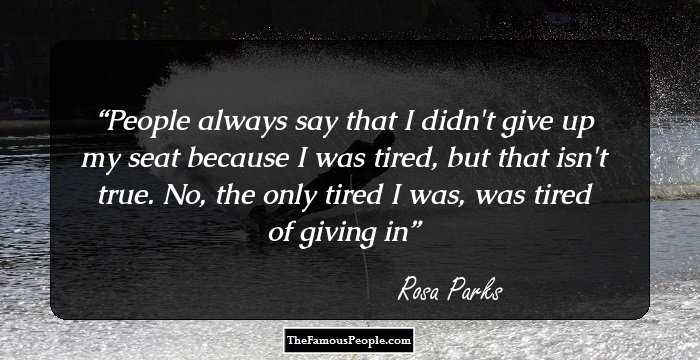 People always say that I didn't give up my seat because I was tired, but that isn't true. No, the only tired I was, was tired of giving in 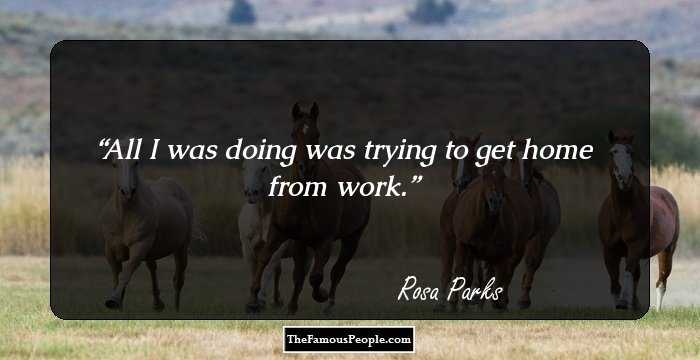 All I was doing was trying to get home from work. 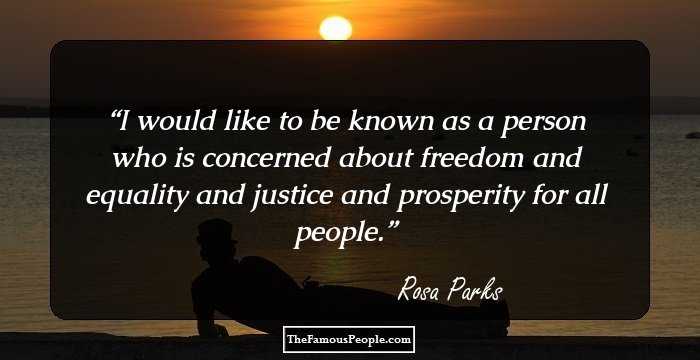 I would like to be known as a person who is concerned about freedom and equality and justice and prosperity for all people. 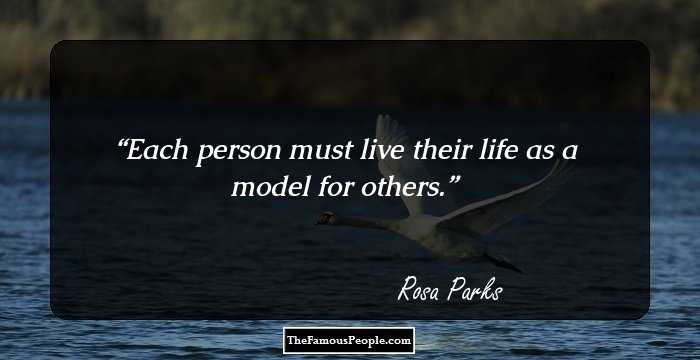 Each person must live their life as a model for others. 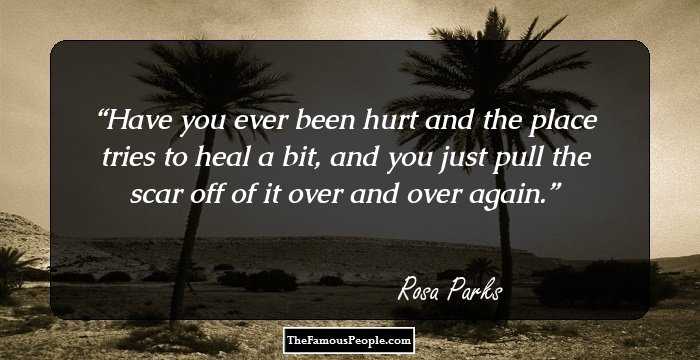 Have you ever been hurt and the place tries to heal a bit, and you just pull the scar off of it over and over again. 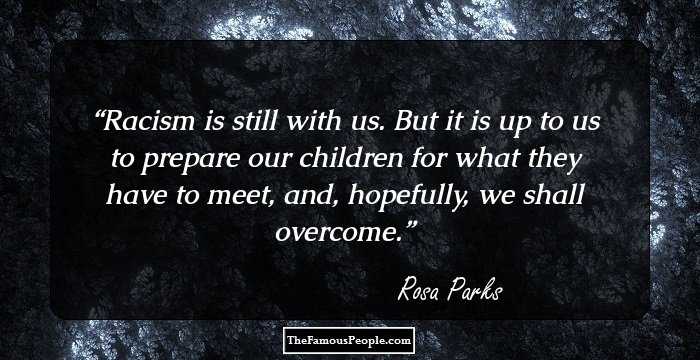 Racism is still with us. But it is up to us to prepare our children for what they have to meet, and, hopefully, we shall overcome. 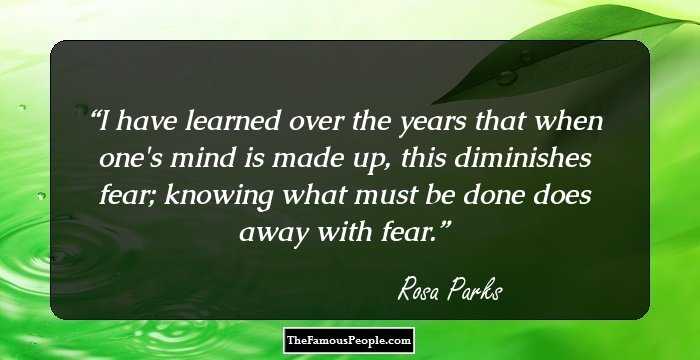 I have learned over the years that when one's mind is made up, this diminishes fear; knowing what must be done does away with fear. 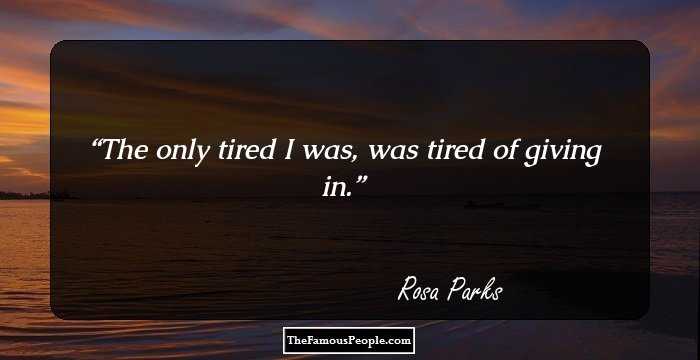 The only tired I was, was tired of giving in. 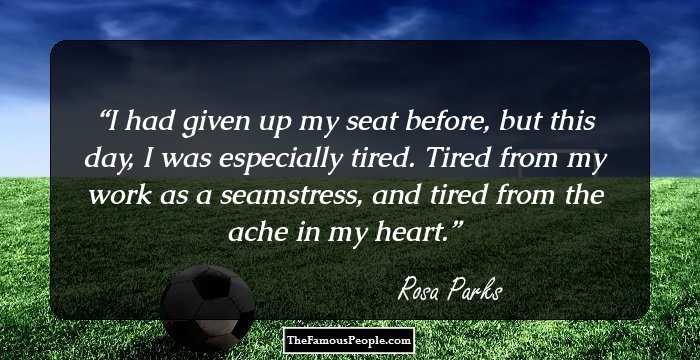 I had given up my seat before, but this day, I was especially tired. Tired from my work as a seamstress, and tired from the ache in my heart. 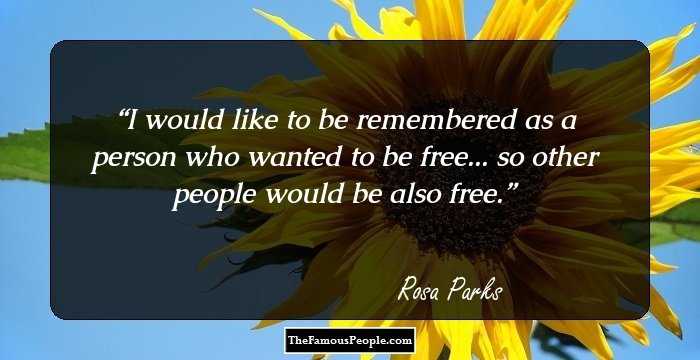 I would like to be remembered as a person who wanted to be free... so other people would be also free. 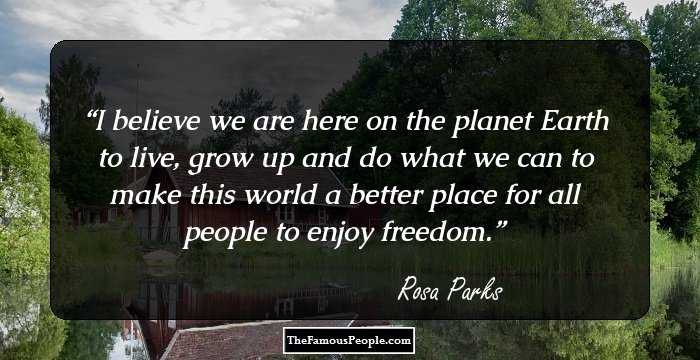 I believe we are here on the planet Earth to live, grow up and do what we can to make this world a better place for all people to enjoy freedom. 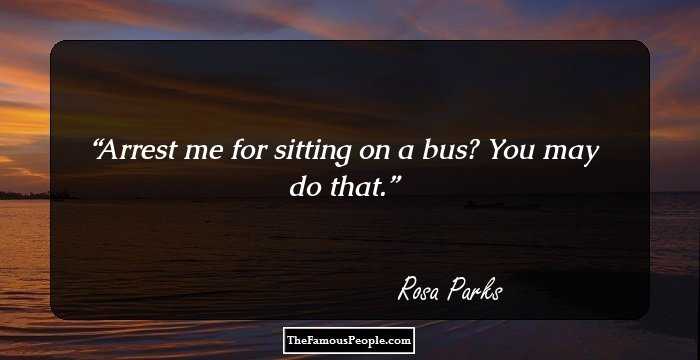 Arrest me for sitting on a bus? You may do that.

You Me
Rosa Parks