Oscar De La Hoya is an American former professional boxer. He became a mixed martial art promoter in 2018. He also started promoting boxing from 2002. He owned the ring from 1992 to 2008 and bagged in eleven titles in six weight classes. In 1995, he was named the âFighter of The Yearâ by âThe Ring Magazine.â He owns a national boxing promotional firm. We bring to you a collection of famous quotes by Oscar De La Hoya which on people, life, struggles, society, progress, fighting, looks, world, issues, age, kids, boxing, training, improvement, attitude, etc.

You get to be famous or have some notoriety and there are so many people who want a piece of you. 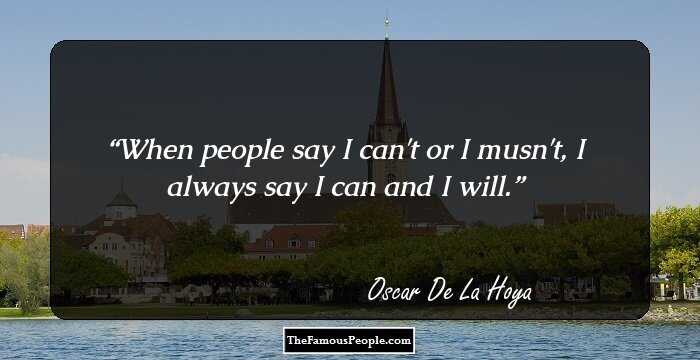 When people say I can't or I musn't, I always say I can and I will. 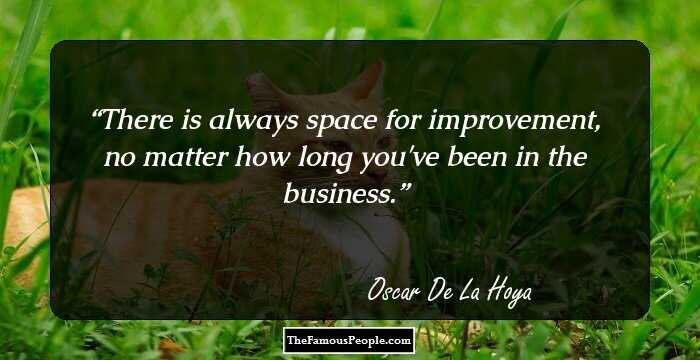 There is always space for improvement, no matter how long you've been in the business. 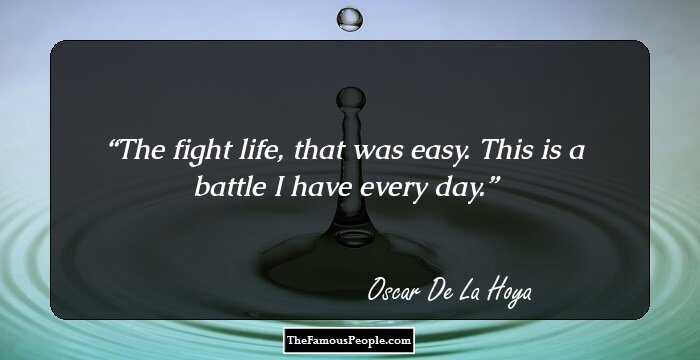 The fight life, that was easy. This is a battle I have every day. 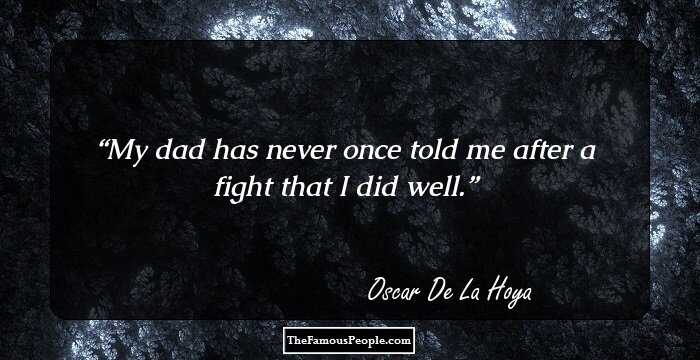 My dad has never once told me after a fight that I did well. 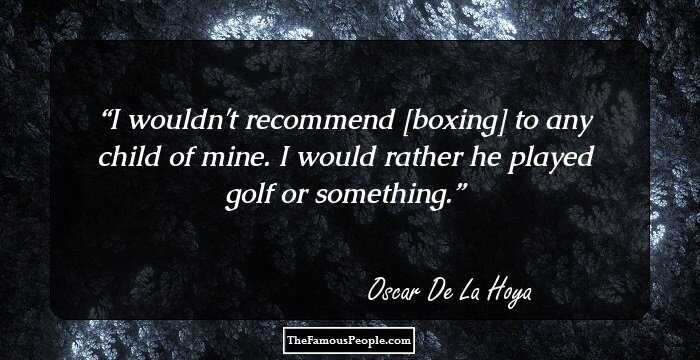 I wouldn't recommend [boxing] to any child of mine. I would rather he played golf or something. 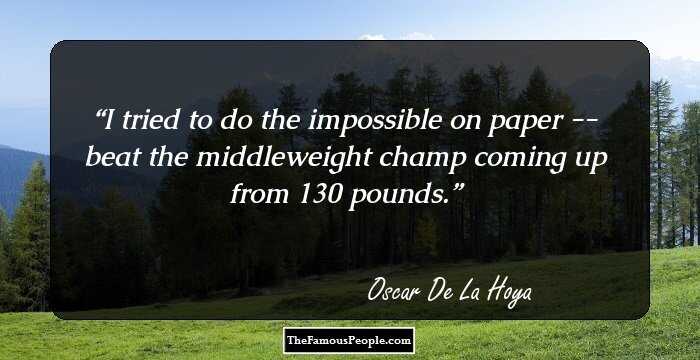 I tried to do the impossible on paper -- beat the middleweight champ coming up from 130 pounds. 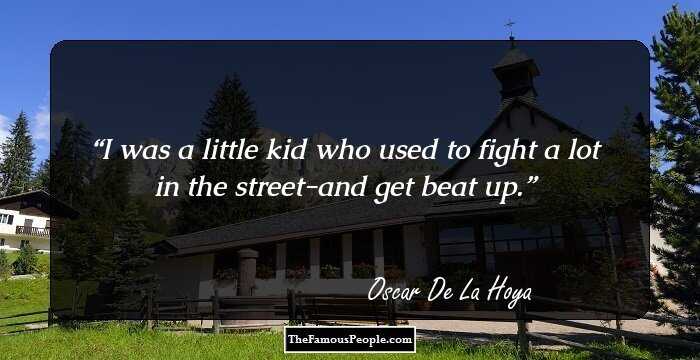 I was a little kid who used to fight a lot in the street-and get beat up. 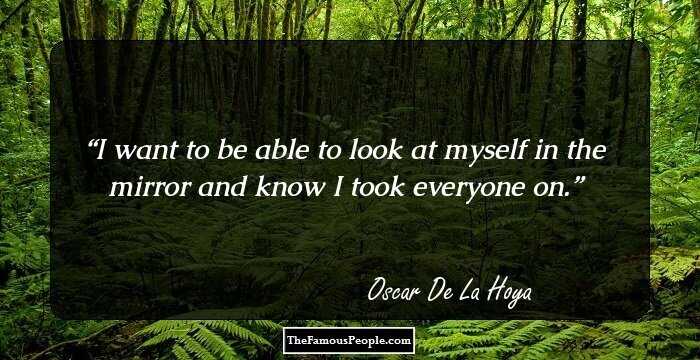 I want to be able to look at myself in the mirror and know I took everyone on. 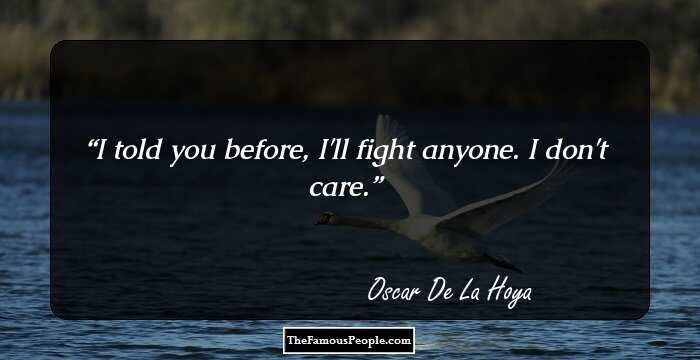 I told you before, I'll fight anyone. I don't care. 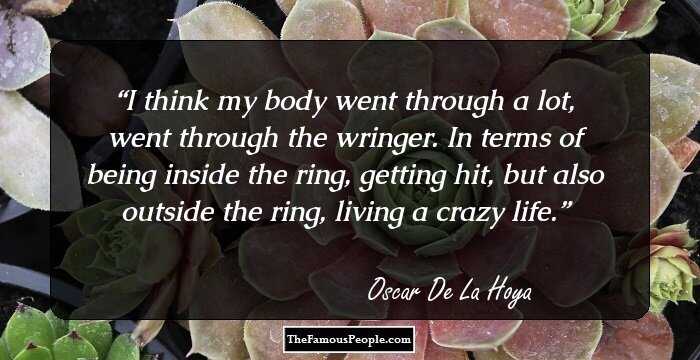 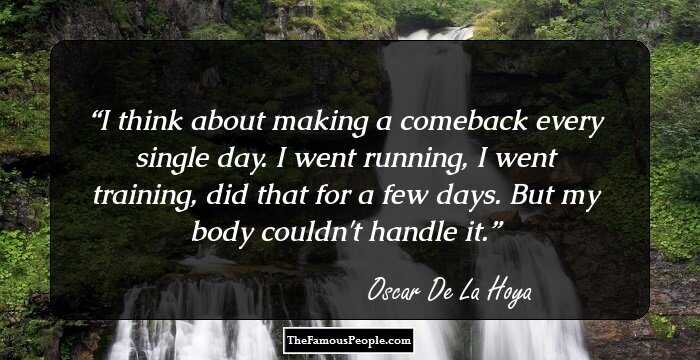 I think about making a comeback every single day. I went running, I went training, did that for a few days. But my body couldn't handle it. 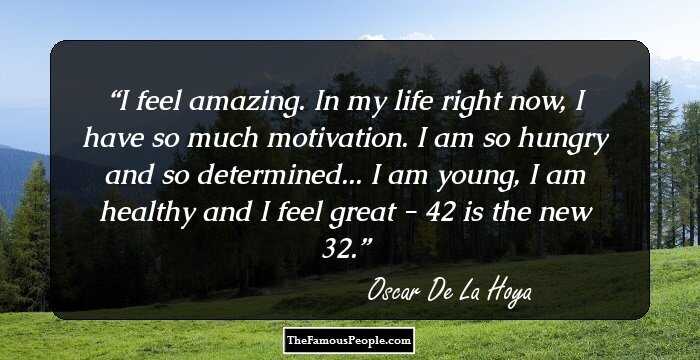 I feel amazing. In my life right now, I have so much motivation. I am so hungry and so determined... I am young, I am healthy and I feel great - 42 is the new 32. 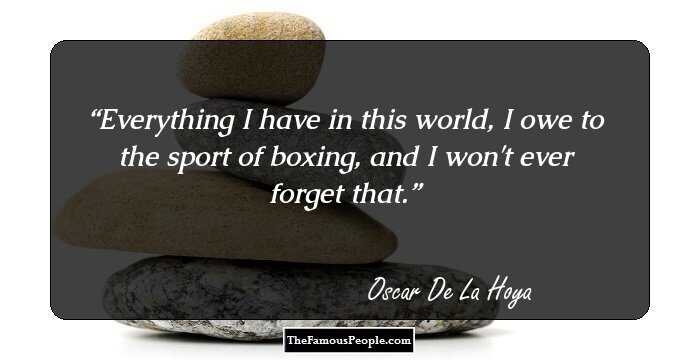 Everything I have in this world, I owe to the sport of boxing, and I won't ever forget that. 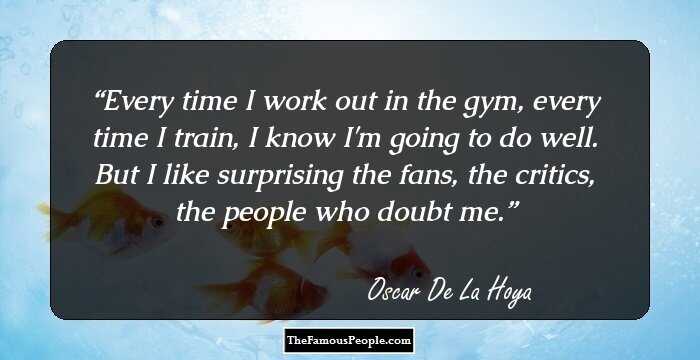 Every time I work out in the gym, every time I train, I know I'm going to do well. But I like surprising the fans, the critics, the people who doubt me. 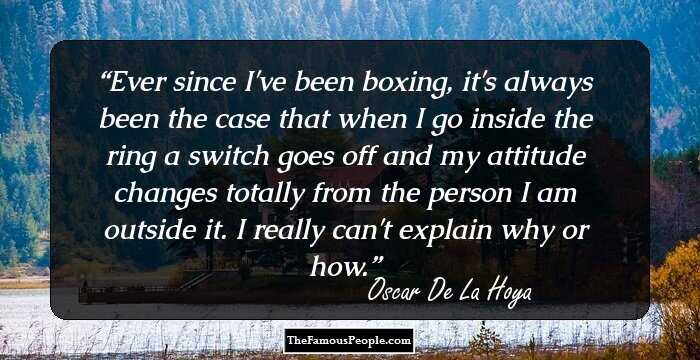 Ever since I've been boxing, it's always been the case that when I go inside the ring a switch goes off and my attitude changes totally from the person I am outside it. I really can't explain why or how. 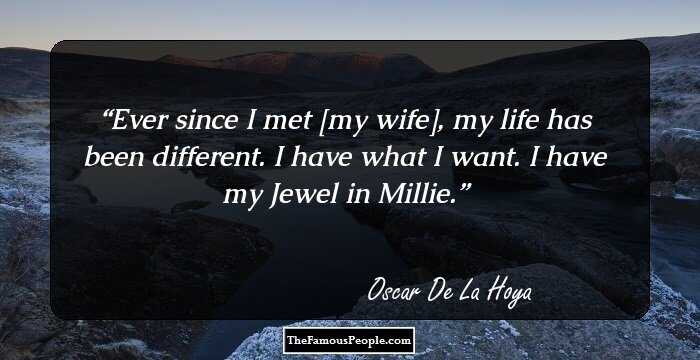 Ever since I met [my wife], my life has been different. I have what I want. I have my Jewel in Millie. 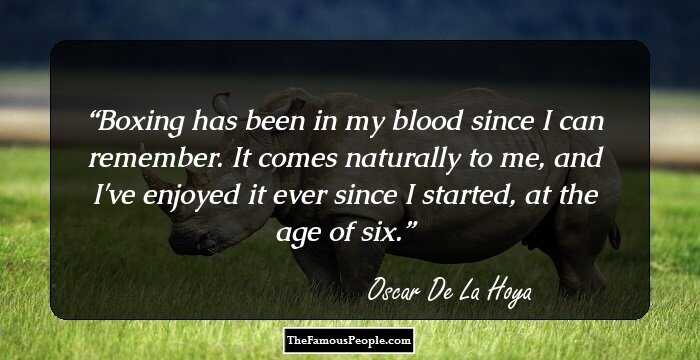 Boxing has been in my blood since I can remember. It comes naturally to me, and I've enjoyed it ever since I started, at the age of six.

After doing an honest evaluation of myself, I recognize that there are certain issues that I need to work on. Like everyone, I have my flaws, and I do not want to be one of those people that is afraid to admit and address those flaws.

As a professional athlete and someone who has spent almost his entire life in boxing, not a day goes by when I don't think about coming back, but I am retired, and after speaking to my family and following a great deal of introspection, I have decided to stay retired.

By the time I retire, I will have fought the best. I will have made my money. Maybe I'll be a boxing commentator. I'll go back to school, definitely. I already have a plan. My life's set. I'll be on an island, married, playing golf in the sun. That will be my life.

It brings me great grief and sadness to hear of the passing of one of the best and most respected trainers of this era, Emanuel Steward. I learned a lot from him during our professional relationship and I will be forever grateful for his help during that time. We were also friends and I know I am going to miss him as so many others will too. He was an important part of our boxing community.

Once, I was at a party...This was at a time when it seemed like I had everything. I was young. I was undefeated. I had money. I`d just moved into my own home. People at the party were laughing and having fun. And I missed my mother. I felt so lonely. I remember asking myself, `Why isn`t my mother here? Why are all these people around me? I don`t want these people around me.' I looked out the window and started crying. 59 Most Memorable Quotes By Yogi Berra, The Yankees Legend