Mirza Asadullah Baig Khan, famously known as Mirza Ghalib, was a prolific Persian and Urdu-language poet who lived during the last years of the Mughal Empire. He used pseudonyms of Asad and Ghalib. He is renowned for numerous sonnets and ghazals that he wrote during his life, all of which have been since elucidated, transcribed, and sung by different individuals. He was the last poet of the Mughal Era and is considered to be one of the most influential and illustrious poets of the Urdu language of all time. We have curated some famous and timeless quotes and sayings by Ghalib, which have been extracted from the enormous sea of his writings, sonnets, ghazals, lyrics, works, songs, thoughts, and life. 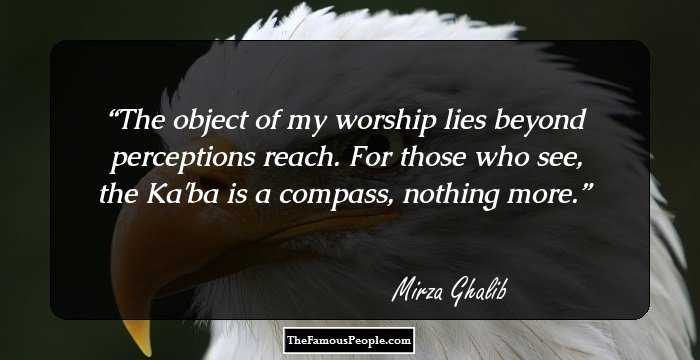 The object of my worship lies beyond perceptions reach. For those who see, the Ka'ba is a compass, nothing more. 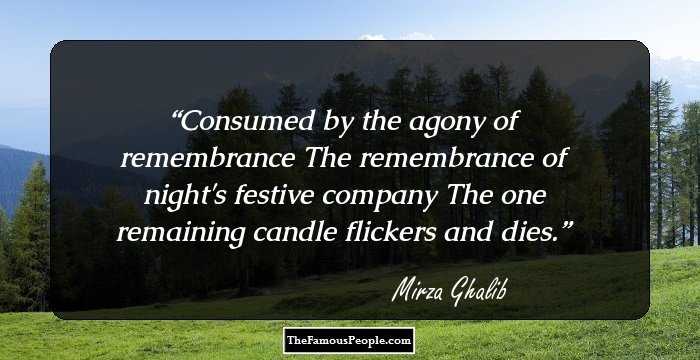 Consumed by the agony of remembrance The remembrance of night's festive company The one remaining candle flickers and dies. 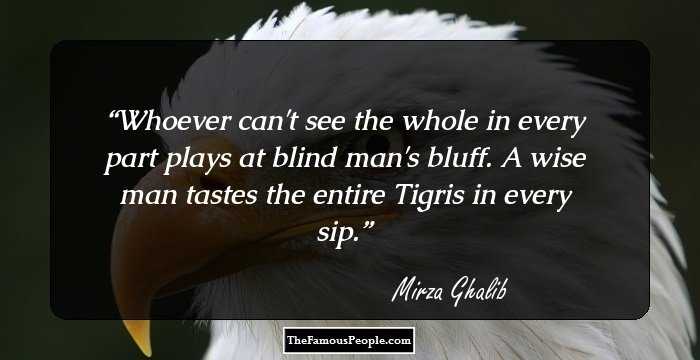 Whoever can't see the whole in every part plays at blind man's bluff. A wise man tastes the entire Tigris in every sip. 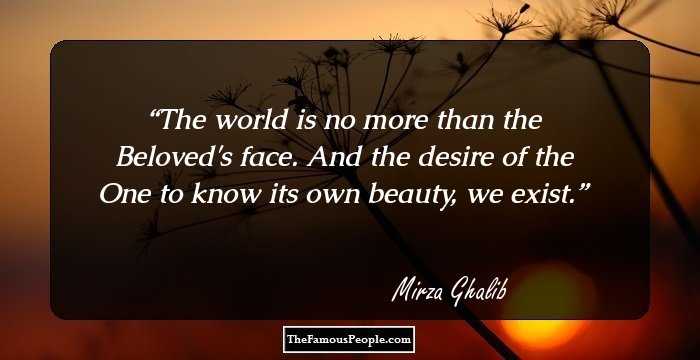 The world is no more than the Beloved's face. And the desire of the One to know its own beauty, we exist. 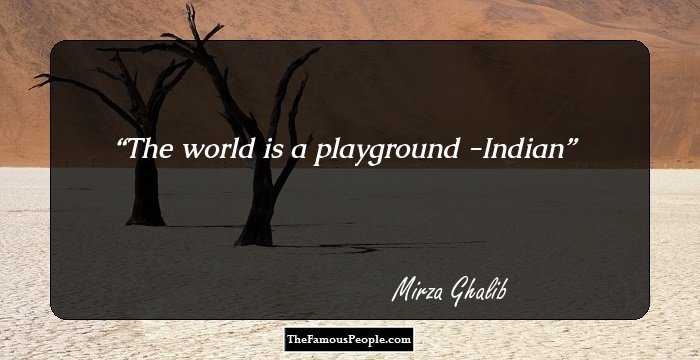 The world is a playground -Indian 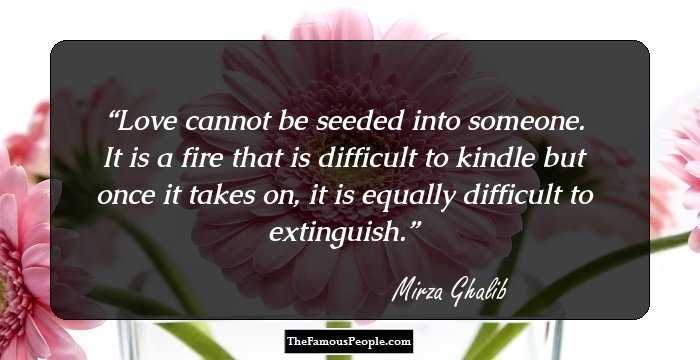 Love cannot be seeded into someone. It is a fire that is difficult to kindle but once it takes on, it is equally difficult to extinguish. 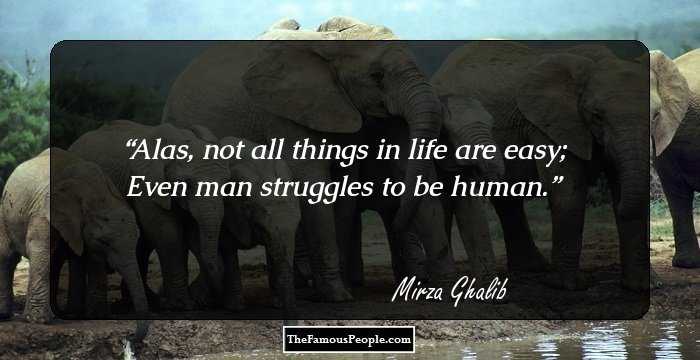 Alas, not all things in life are easy; Even man struggles to be human. 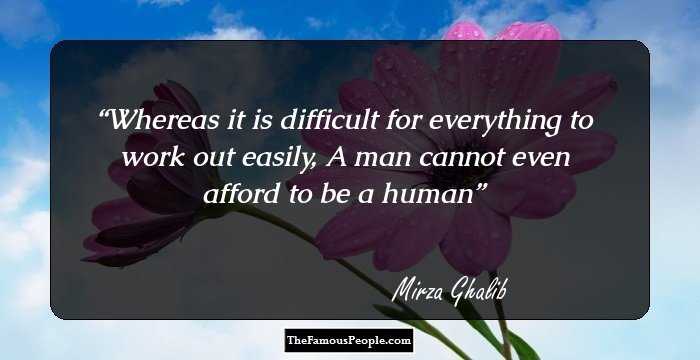 Whereas it is difficult for everything to work out easily, A man cannot even afford to be a human 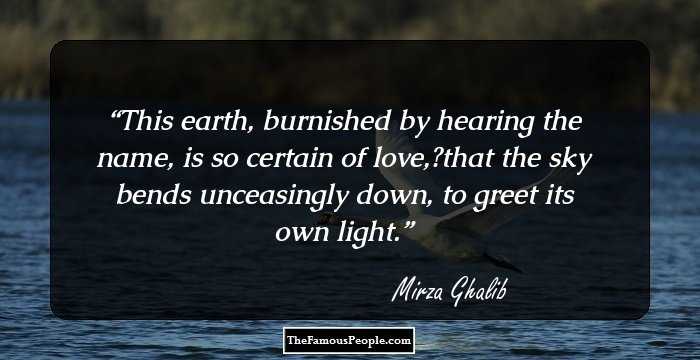 This earth, burnished by hearing the name, is so certain of love,â¨that the sky bends unceasingly down, to greet its own light. 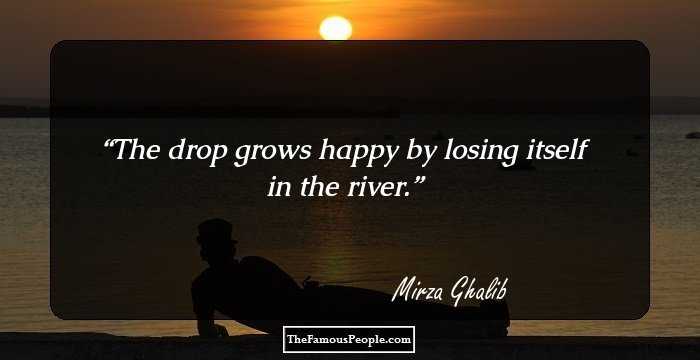 The drop grows happy by losing itself in the river. 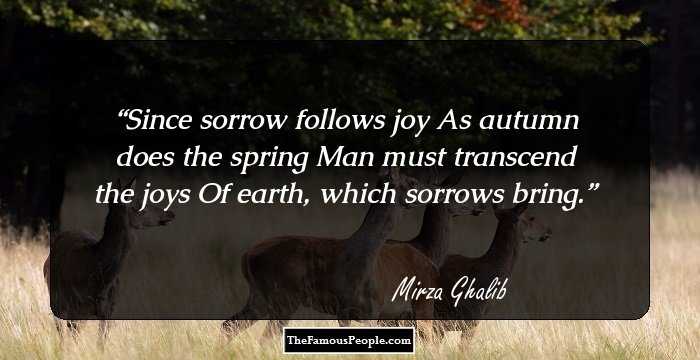 Since sorrow follows joy As autumn does the spring Man must transcend the joys Of earth, which sorrows bring. 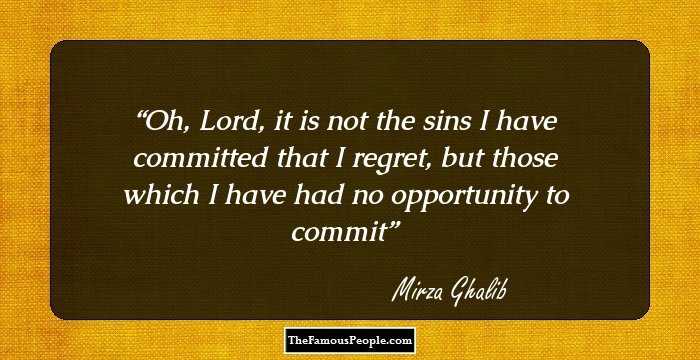 Oh, Lord, it is not the sins I have committed that I regret, but those which I have had no opportunity to commit 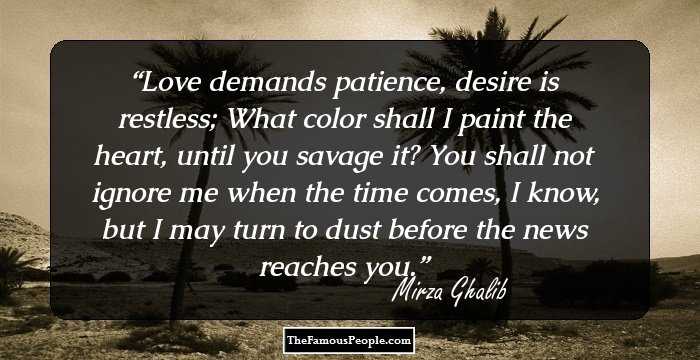 Love demands patience, desire is restless; What color shall I paint the heart, until you savage it? You shall not ignore me when the time comes, I know, but I may turn to dust before the news reaches you. 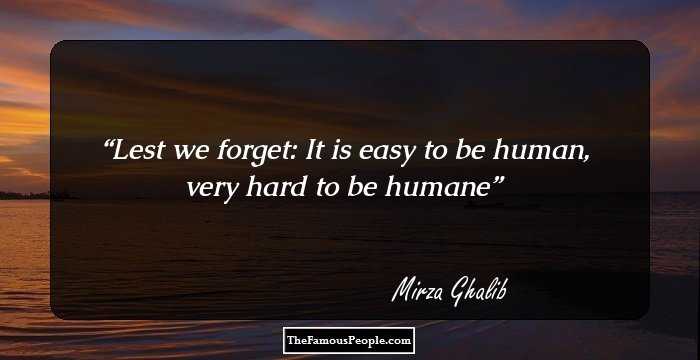 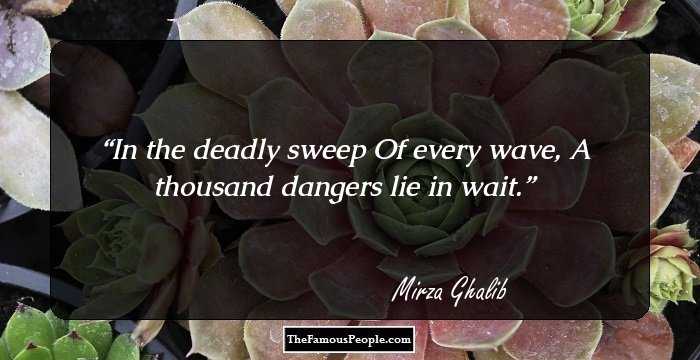 In the deadly sweep Of every wave, A thousand dangers lie in wait. 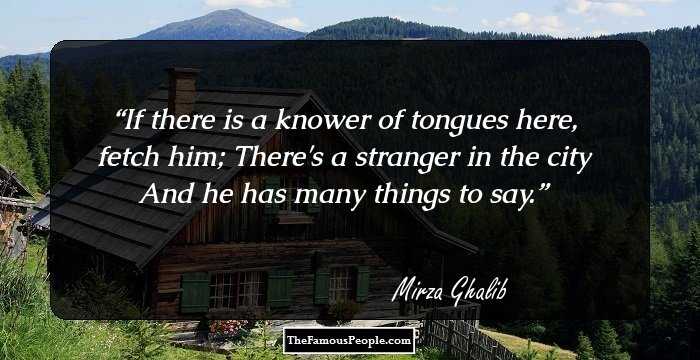 If there is a knower of tongues here, fetch him; There's a stranger in the city And he has many things to say. 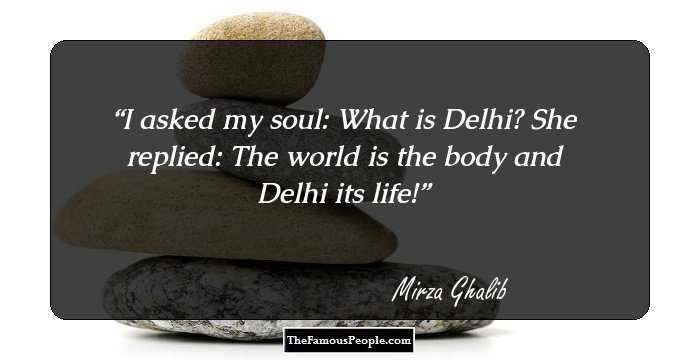 I asked my soul: What is Delhi? She replied: The world is the body and Delhi its life! 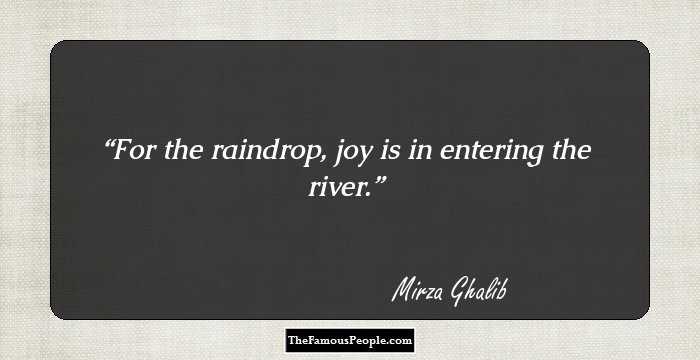 For the raindrop, joy is in entering the river.

He gave me heaven and earth, and assumed I'd be satisfied; Actually I was too embarrassed to argue. The spiritual seekers are tired, two or three at each stage of the path. The rest who have given up never knew your address at all. There are so many in this gathering who wish the candle well. But if the being of the candle is melting, what can the sorrow-sharers do? 36 Great Kabir Quotes That Have Answer To All Your Woes 32 Quotes By R. K. Narayan Whose Words Weave A Spell On Readers