A collection of quotes and thoughts by John Morris Roberts on history, world, books, penguin, European, historian, politics, and triumph.

26 Top John Morris Roberts Quotes That Give Insight Into History 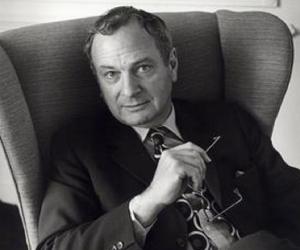 Famous As: Historian
Born On: April 14, 1928
Died On: May 30, 2003
Born In: Bath, England, United Kingdom
Died At Age: 75
John Morris Roberts was a well-known British historian who also gained fame as the presenter and author of âThe Triumph of The Westâ, a BBC TV Series. He served as the Warden of âMerton Collegeâ, Oxford and as the vice chancellor of the âUniversity of Southamptonâ. Born, to a department store worker in Bath, he took a first in Modern History after earning a scholarship to Keble College, Oxford. Some of his significant works include, âEuropeâ, âThe New Penguin History of The Worldâ, âThe New History of The Worldâ, âAn Illustrated World Historyâ, âThe Mythology of the Secret Societiesâ and âThe Age of Revolutionâ amongst various others. We have amassed some notable quotes and sayings by John Morris Roberts which have been collected from his vast sea of writings, books, thoughts, television series, interviews, works and life. Presenting some famous and meaningful quotes and thoughts by John Morris Roberts which are quoted widely.
Listed In:
Intellectuals & Academics 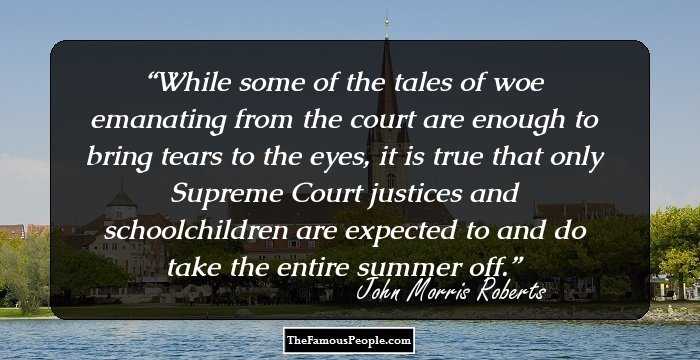 While some of the tales of woe emanating from the court are enough to bring tears to the eyes, it is true that only Supreme Court justices and schoolchildren are expected to and do take the entire summer off. 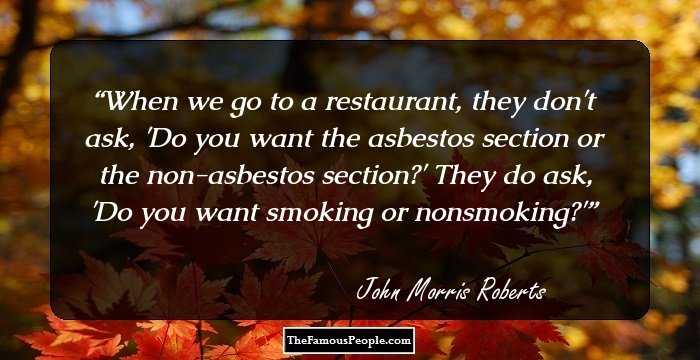 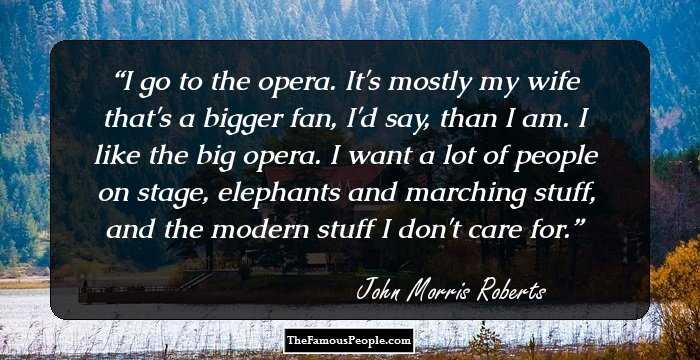 I go to the opera. It's mostly my wife that's a bigger fan, I'd say, than I am. I like the big opera. I want a lot of people on stage, elephants and marching stuff, and the modern stuff I don't care for. 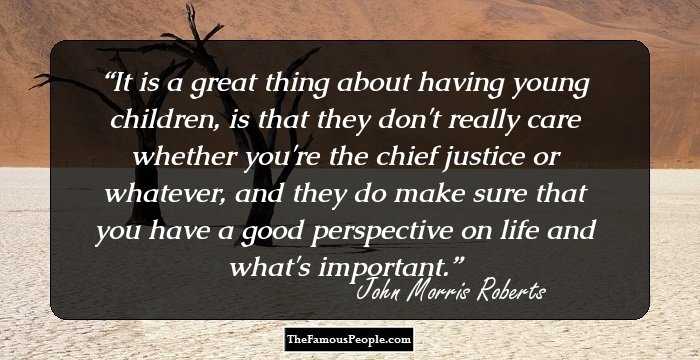 It is a great thing about having young children, is that they don't really care whether you're the chief justice or whatever, and they do make sure that you have a good perspective on life and what's important. 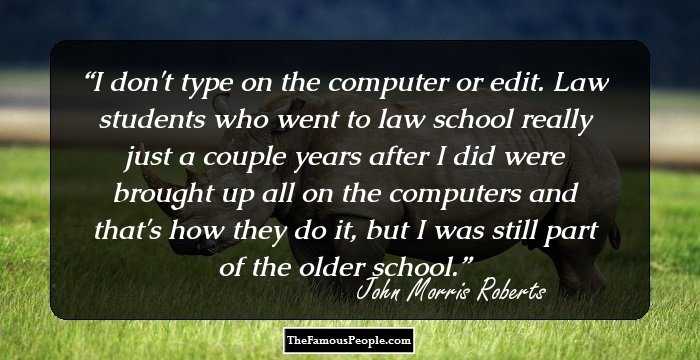 I don't type on the computer or edit. Law students who went to law school really just a couple years after I did were brought up all on the computers and that's how they do it, but I was still part of the older school. 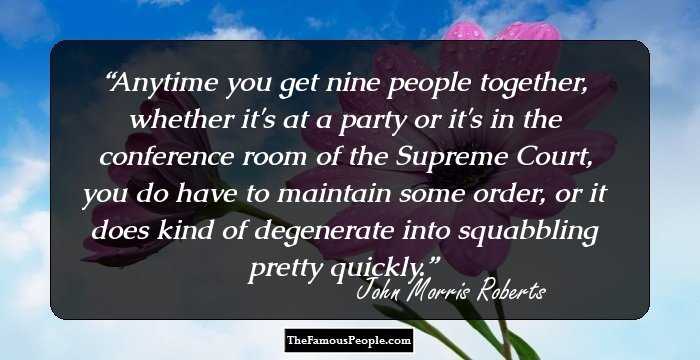 Anytime you get nine people together, whether it's at a party or it's in the conference room of the Supreme Court, you do have to maintain some order, or it does kind of degenerate into squabbling pretty quickly. 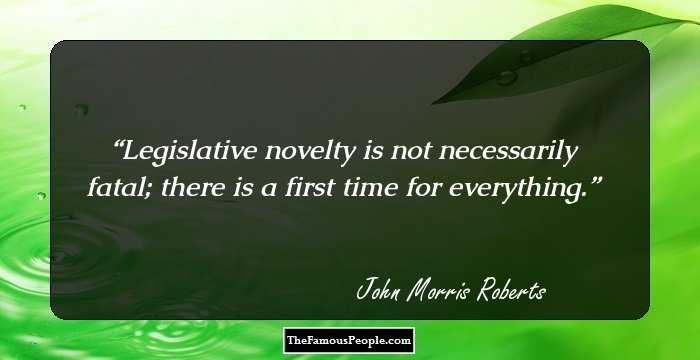 Legislative novelty is not necessarily fatal; there is a first time for everything. 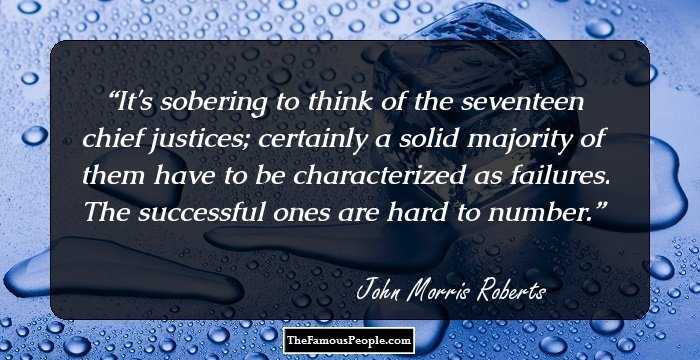 It's sobering to think of the seventeen chief justices; certainly a solid majority of them have to be characterized as failures. The successful ones are hard to number. 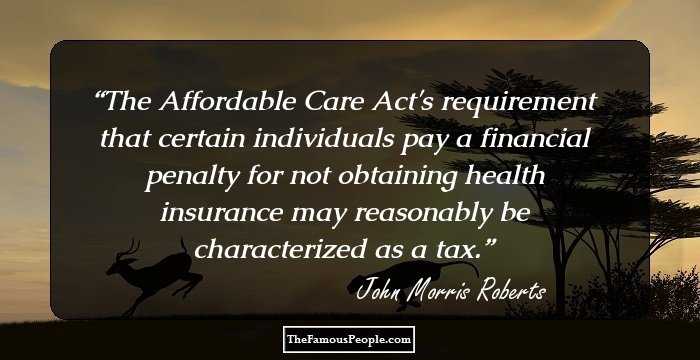 The Affordable Care Act's requirement that certain individuals pay a financial penalty for not obtaining health insurance may reasonably be characterized as a tax. 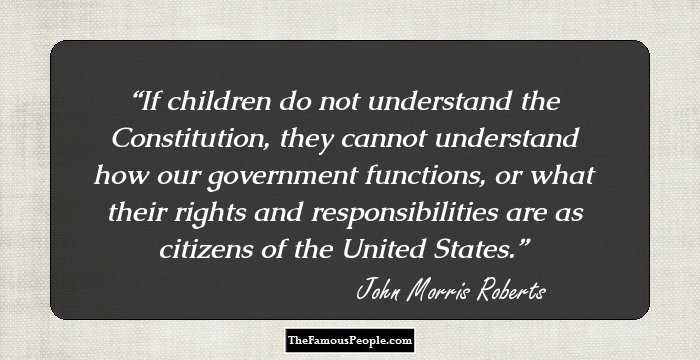 If children do not understand the Constitution, they cannot understand how our government functions, or what their rights and responsibilities are as citizens of the United States. 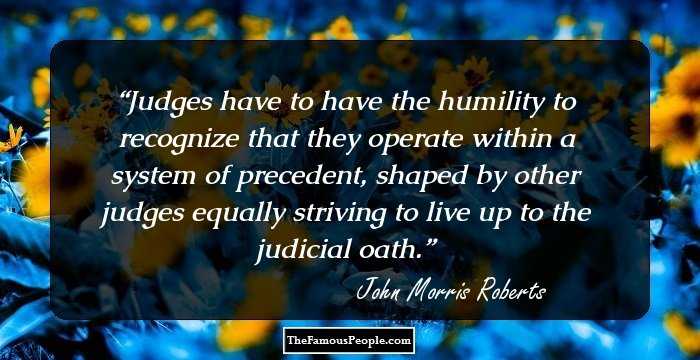 Judges have to have the humility to recognize that they operate within a system of precedent, shaped by other judges equally striving to live up to the judicial oath. 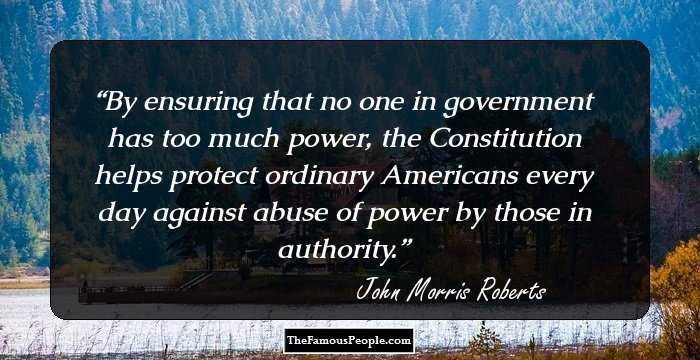 By ensuring that no one in government has too much power, the Constitution helps protect ordinary Americans every day against abuse of power by those in authority. 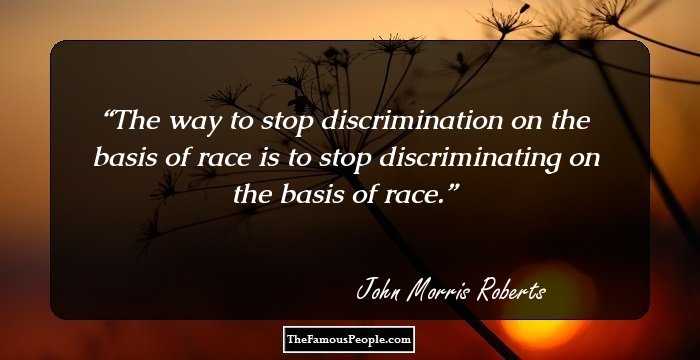 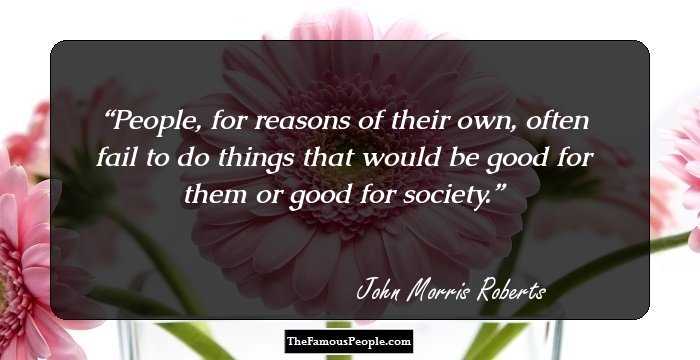 People, for reasons of their own, often fail to do things that would be good for them or good for society. 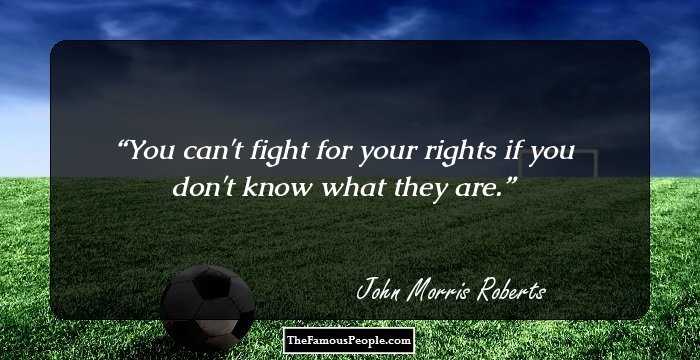 You can't fight for your rights if you don't know what they are. 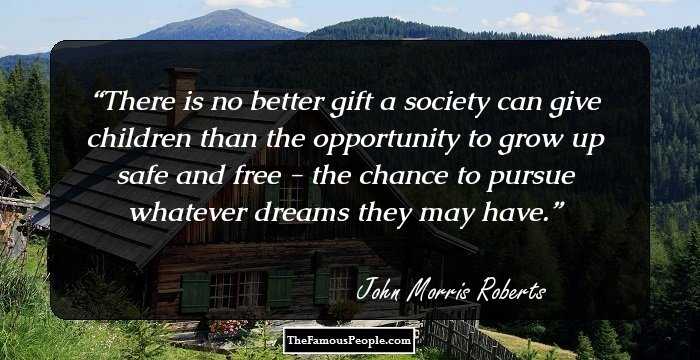 There is no better gift a society can give children than the opportunity to grow up safe and free - the chance to pursue whatever dreams they may have.

Judges are like umpires. Umpires don't make the rules. They apply them. The role of an umpire and a judge is critical. They make sure everybody plays by the rules. But it is a limited role. Nobody ever went to a ballgame to see the umpire.

I will be vigilant to protect the independence and integrity of the Supreme Court, and I will work to ensure that it upholds the rule of law and safeguards those liberties that make this land one of endless possibilities for all Americans.

I think judicial temperament is a willingness to step back from your own committed views of the correct jurisprudential approach and evaluate those views in terms of your role as a judge. It's the difference between being a judge and being a law professor.

President Ronald Reagan used to speak of the Soviet constitution, and he noted that it purported to grant wonderful rights of all sorts to people. But those rights were empty promises, because that system did not have an independent judiciary to uphold the rule of law and enforce those rights.

A justice is not like a law professor, who might say, 'This is my theory... and this is what I'm going to be faithful to and consistent with,' and in twenty years will look back and say, 'I had a consistent theory of the First Amendment as applied to a particular area.'

A chief justice's authority is really quite limited, and the dynamic among all the justices is going to affect whether he can accomplish much or not. There is this convention of referring to the Taney Court, the Marshall Court, the Fuller Court, but a chief justice has the same vote that everyone else has.

I vividly remember my first day on the White House staff. My office, of course, was in the Old Executive Office Building. I didn't rate one in the West Wing; but don't try to tell me or any of the rest of us working there that we weren't working in the White House.

There's a lot of the Midwest and the West in Justice Rehnquist's approach to constitutional law. And by that I mean a recognition that people know pretty well how to govern themselves, that government that is closest to the people is apt to be more responsive to their legitimate concerns and needs.

People, for reasons of their own, often fail to do things that would be good for them or good for society. Those failures - joined with the similar failures of others - can readily have a substantial effect on interstate commerce.

When I worked in the Department of Justice, in the office of the solicitor general, it was my job to argue cases for the United States before the Supreme court. I always found it very moving to stand before the justices and say, 'I speak for my country.' 39 Quotes By Karen Armstrong That Encapsulate Human Spirit And Life 19 Interesting Quotes By Alfred Marshall For The Scholarly