John Bonham started playing on coffee tins at the age of five and worked his way to become the drummer of the British rock band 'Led Zeppelin' without any formal training. He made fans feel his music by bringing in special effects and sounds. He was ranked number one amongst the '100 Greatest Drummers' by the 'Rolling Stone' magazine. Though he avoided drinking before a show, he died at the age of 32 due to a spell of over drinking that made him choke on his vomit while sleeping. John Bonham has influenced many rock drummers by his style and will remain a legend. We have compiled his quotes from his interviews and articles. A look at some ofÂ John Bonham quotes on interest, like, people, time, money, thought, etc. 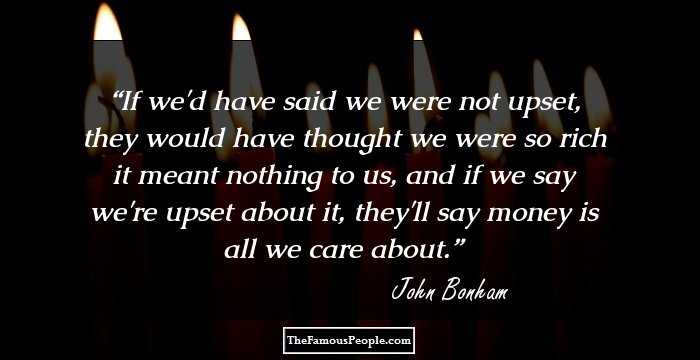 If we'd have said we were not upset, they would have thought we were so rich it meant nothing to us, and if we say we're upset about it, they'll say money is all we care about. 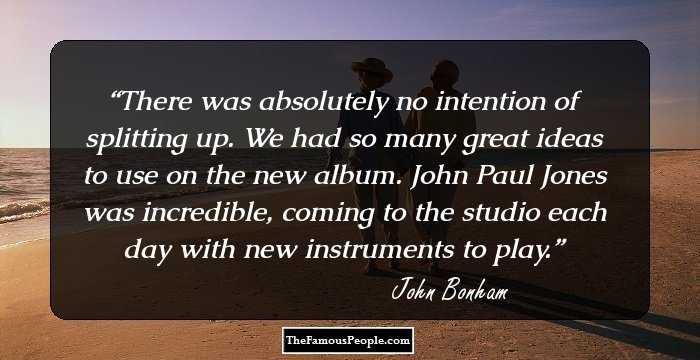 There was absolutely no intention of splitting up. We had so many great ideas to use on the new album. John Paul Jones was incredible, coming to the studio each day with new instruments to play. 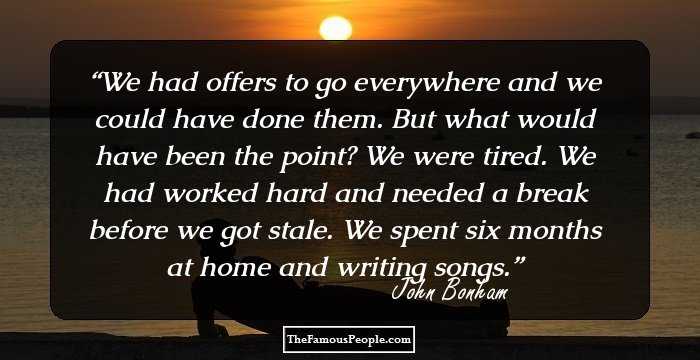 We had offers to go everywhere and we could have done them. But what would have been the point? We were tired. We had worked hard and needed a break before we got stale. We spent six months at home and writing songs. 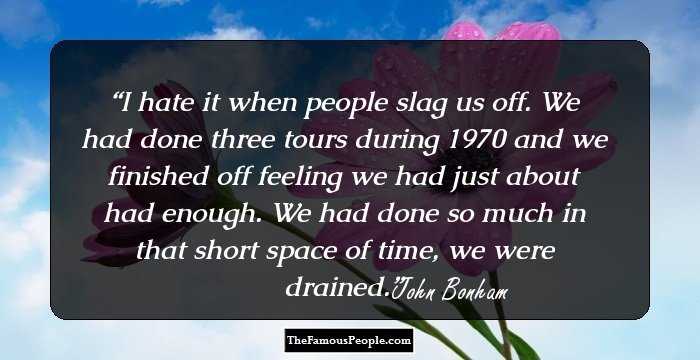 I hate it when people slag us off. We had done three tours during 1970 and we finished off feeling we had just about had enough. We had done so much in that short space of time, we were drained. 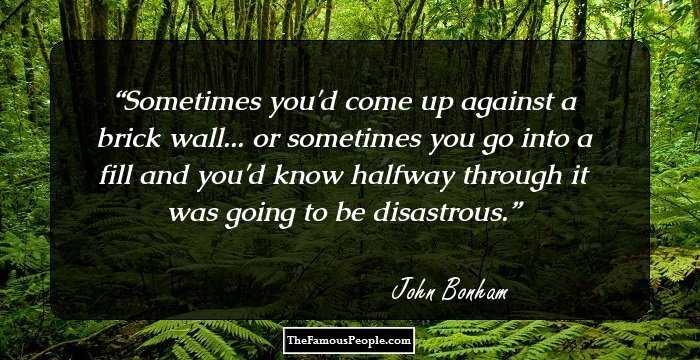 Sometimes you'd come up against a brick wall... or sometimes you go into a fill and you'd know halfway through it was going to be disastrous. 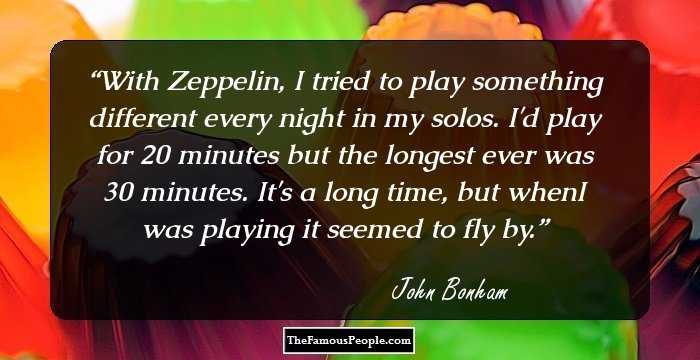 With Zeppelin, I tried to play something different every night in my solos. I'd play for 20 minutes but the longest ever was 30 minutes. It's a long time, but whenI was playing it seemed to fly by. 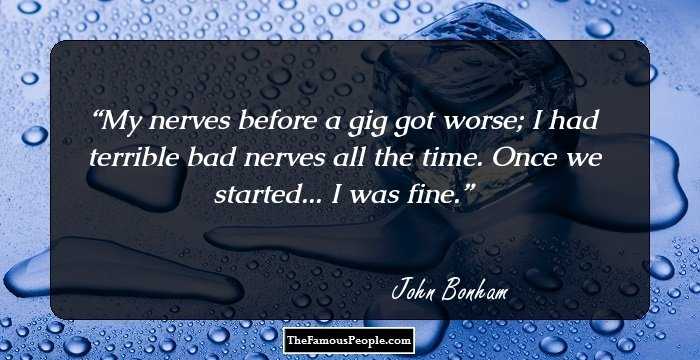 My nerves before a gig got worse; I had terrible bad nerves all the time. Once we started... I was fine. 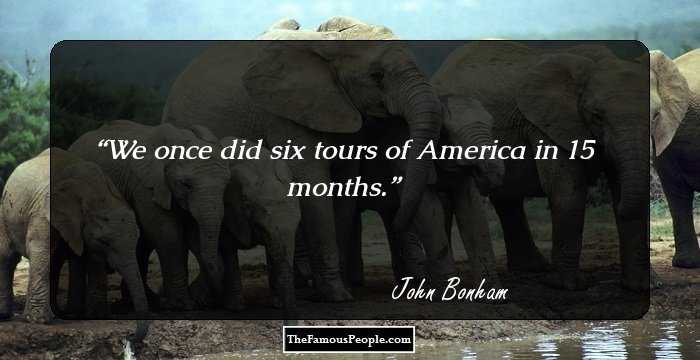 We once did six tours of America in 15 months. 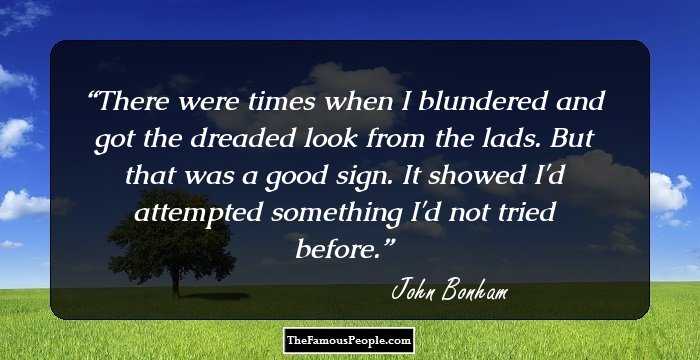 There were times when I blundered and got the dreaded look from the lads. But that was a good sign. It showed I'd attempted something I'd not tried before. 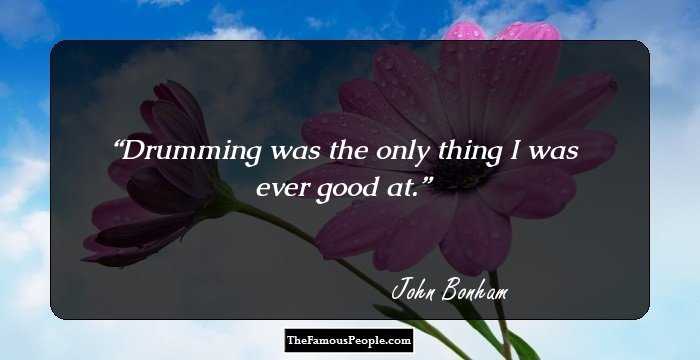 Drumming was the only thing I was ever good at. 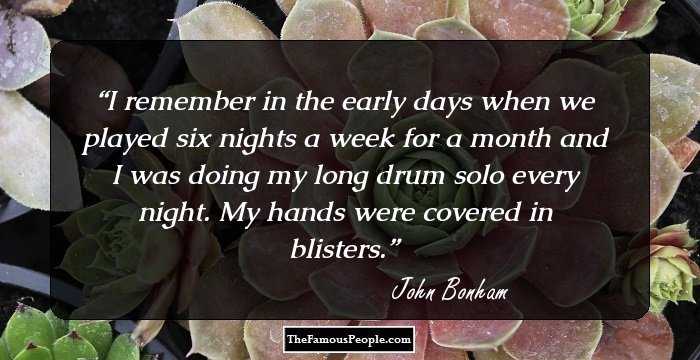 I remember in the early days when we played six nights a week for a month and I was doing my long drum solo every night. My hands were covered in blisters. 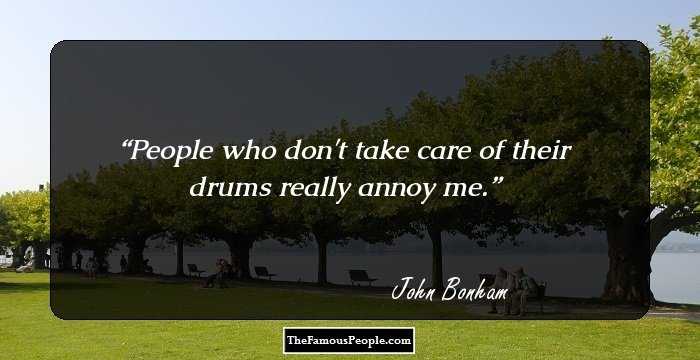 People who don't take care of their drums really annoy me. 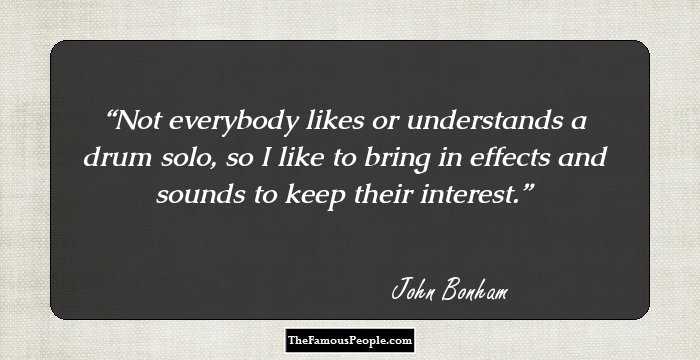 Not everybody likes or understands a drum solo, so I like to bring in effects and sounds to keep their interest. 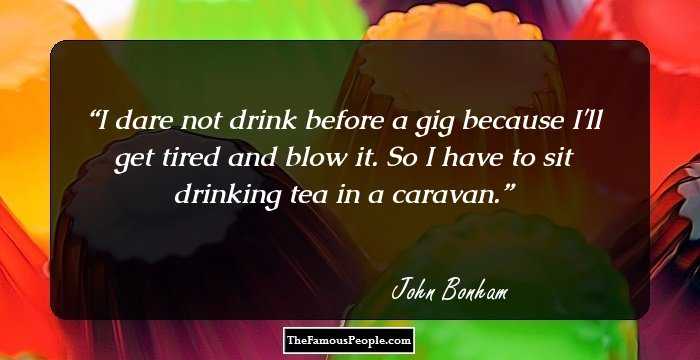 I dare not drink before a gig because I'll get tired and blow it. So I have to sit drinking tea in a caravan. 35 Famous Quotes By Keith Richards For A Rhythmic Life 100 Powerful Quotes By John Lennon To Feed Your Soul