Famous As: Actress
Born On: April 17, 1972
Born In: Houston, Texas, United States
Age: 50 Years
Jennifer Garner is a celebrated American actress. She hogged the limelight with her performance in ABC spy-action thriller titled âAliasâ where she played the role of a CIA officer. Prior to this she had also been a part of âPearl Harborâ where she appeared in a supporting role. She bagged in âPrimetime Emmy Awardâ, âGolden Globe Awardâ as well as âSAG Awardâ for her outstanding performances one after the other. Some of her eminent works include, âCatch Me If You Canâ, âThe Odd Life Of Timothy Greenâ, â13 Going On 30â, âAlexander And The Terrible, Horrible, No Good, Very Bad Dayâ and âDallas Buyers Clubâ amongst various others. Read through the quotes and sayings by the distinguished actress which have been gathered from her works, movies, thoughts, films, interviews, dialogues, tweets, public utterances and life. Take a look at the meaningful and famous quotes and thoughts by Jennifer Garner.
Listed In:
Film & Theater Personalities
Actresses 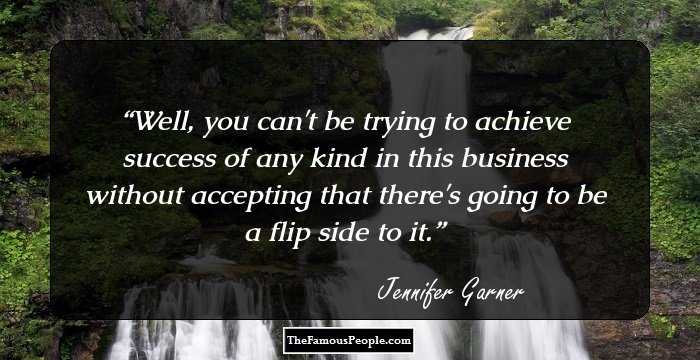 Well, you can't be trying to achieve success of any kind in this business without accepting that there's going to be a flip side to it. 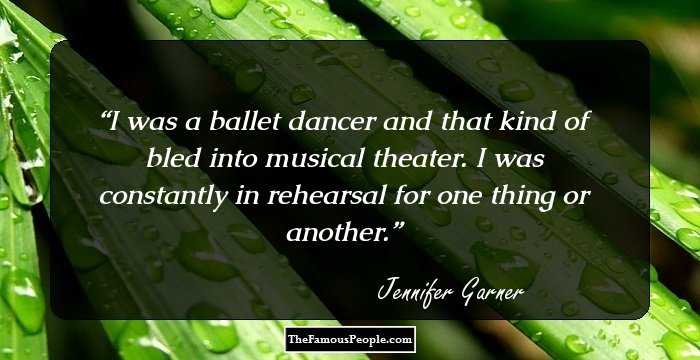 I was a ballet dancer and that kind of bled into musical theater. I was constantly in rehearsal for one thing or another. 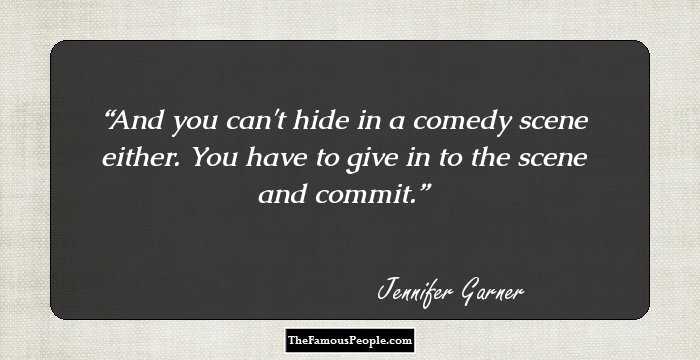 And you can't hide in a comedy scene either. You have to give in to the scene and commit. 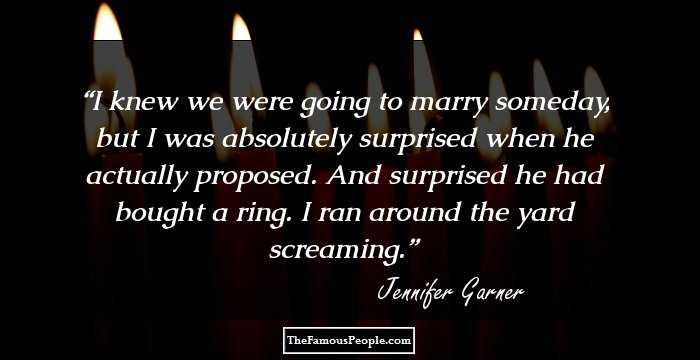 I knew we were going to marry someday, but I was absolutely surprised when he actually proposed. And surprised he had bought a ring. I ran around the yard screaming. 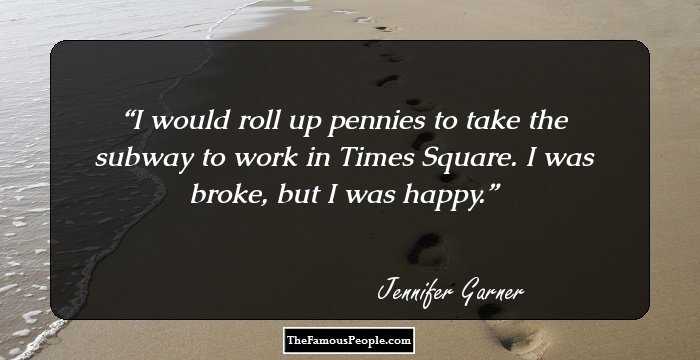 I would roll up pennies to take the subway to work in Times Square. I was broke, but I was happy. 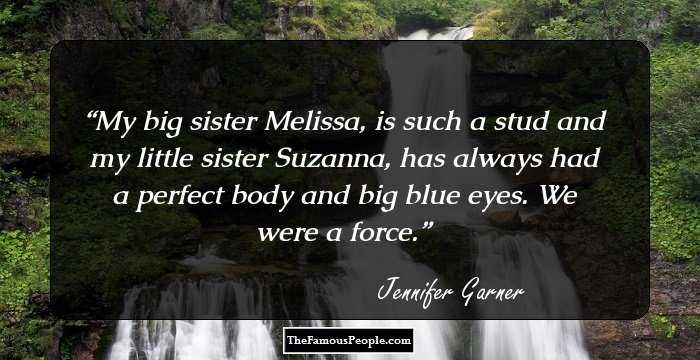 My big sister Melissa, is such a stud and my little sister Suzanna, has always had a perfect body and big blue eyes. We were a force. 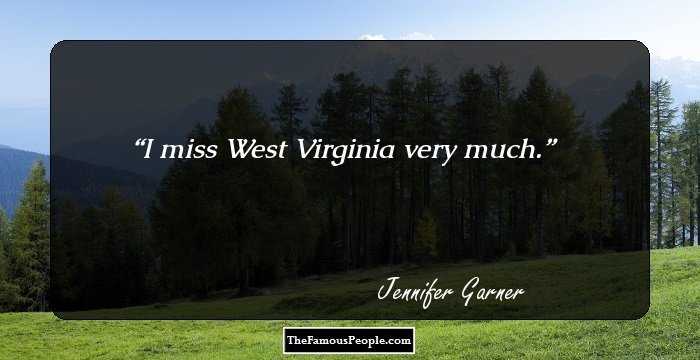 I miss West Virginia very much. 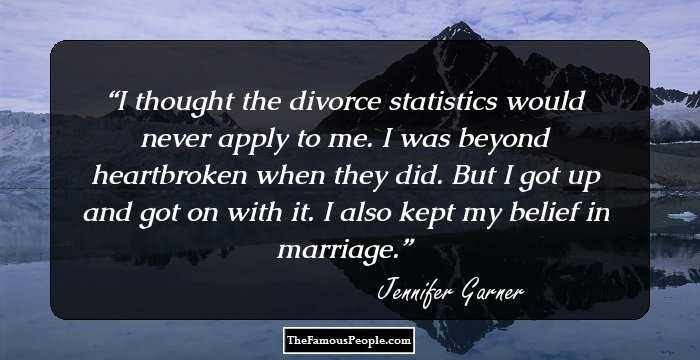 I thought the divorce statistics would never apply to me. I was beyond heartbroken when they did. But I got up and got on with it. I also kept my belief in marriage. 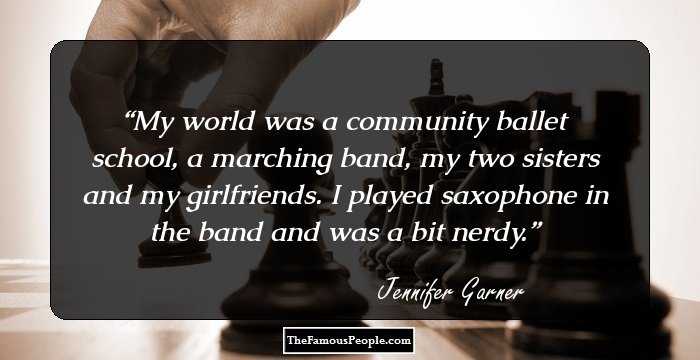 My world was a community ballet school, a marching band, my two sisters and my girlfriends. I played saxophone in the band and was a bit nerdy. 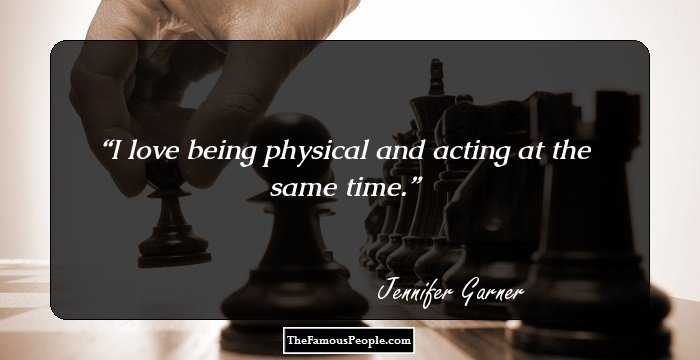 I love being physical and acting at the same time. 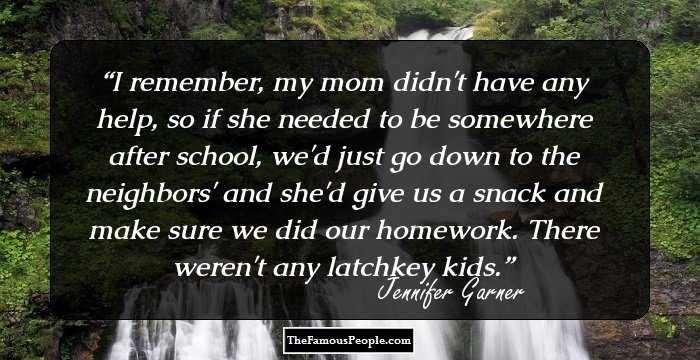 I remember, my mom didn't have any help, so if she needed to be somewhere after school, we'd just go down to the neighbors' and she'd give us a snack and make sure we did our homework. There weren't any latchkey kids. 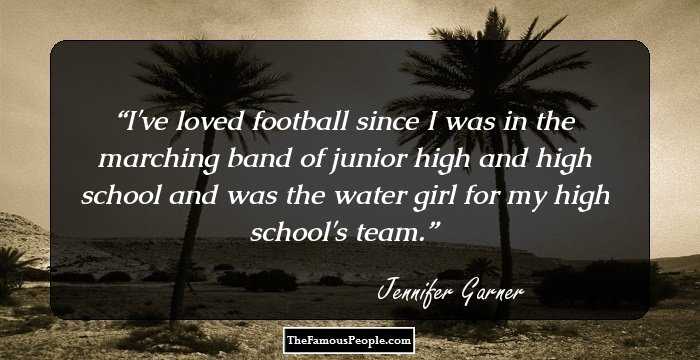 I've loved football since I was in the marching band of junior high and high school and was the water girl for my high school's team. 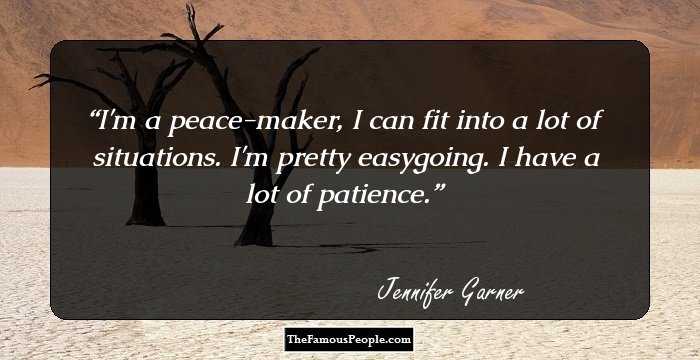 I'm a peace-maker, I can fit into a lot of situations. I'm pretty easygoing. I have a lot of patience. 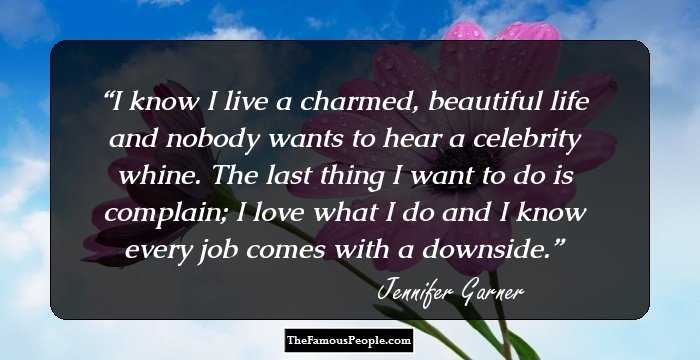 I know I live a charmed, beautiful life and nobody wants to hear a celebrity whine. The last thing I want to do is complain; I love what I do and I know every job comes with a downside. 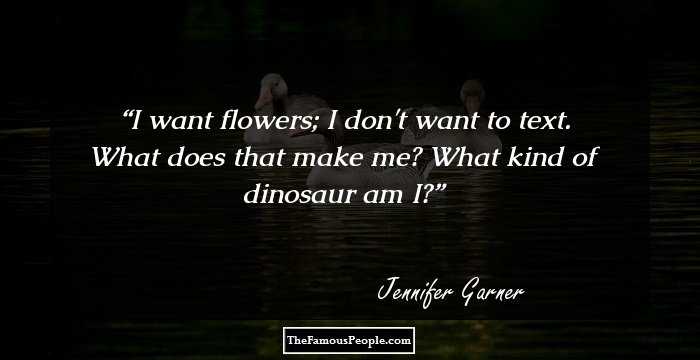 I want flowers; I don't want to text. What does that make me? What kind of dinosaur am I?

My mother is a big believer in being responsible for your own happiness. She always talked about finding joy in small moments and insisted that we stop and take in the beauty of an ordinary day. When I stop the car to make my kids really see a sunset, I hear my mother's voice and smile.

I do like having my ears pierced, because there's a lot more choice in pierced earrings than there is with clip-ons, and they're a lot more comfortable to wear - Sometimes I completely forget I've got them in and end up going to sleep wearing them.

I always, always meant to be on stage. I only ended up even auditioning for television and movies because I was understudying a Turgenev play on Broadway and was so broke that, when I got a mini-series, I had to take it and was so ashamed because I was such a snob.

Why does everyone think they need to be a star? It's ridiculous. The celebrity culture is so silly, and the fact that people grow up thinking that it's something to aspire to just seems wrong. I don't mean to bash my life. I love my life; I just think it's not the only way to go.

We all have a responsibility to volunteer somewhere and I'm lucky that I get the education and get taken to places to see what's out there and see what's happening and to then be a part of it in hopefully an impactful way.

My mom grew up in poverty in Oklahoma - like Dust Bowl, nine people in one room kind of place - and the way she got out of poverty was through education. My dad grew up without a dad, with very little and he also made his way out through education.

I can definitely benefit from a self-tan, although I cannot say that I am the best at applying it. I'm just not gifted at those kinds of things! But bronzer for sure. Also, just using blush that has that kind of a sun-kissed color as opposed to a bright pink. I would rather have it be really sheer and just right where the sun would hit you.

The last thing I want to do is complain; I love what I do, and I know every job comes with a downside. But boy, this one's a doozy...You pull out of your driveway, and the paparazzi literally chase you, running red lights - I'm a really careful driver, especially with my kids in the car, but I worry they're going to cause an accident. 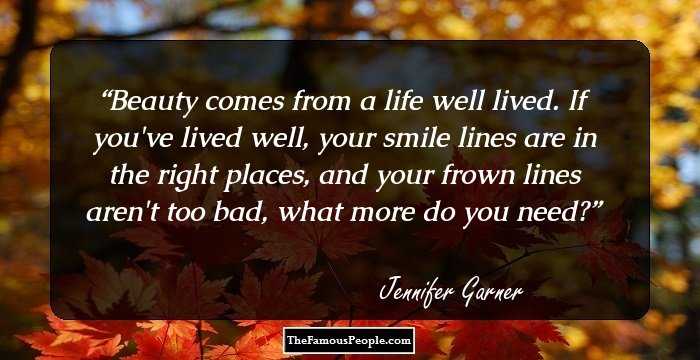 Beauty comes from a life well lived. If you've lived well, your smile lines are in the right places, and your frown lines aren't too bad, what more do you need?

I'm so thrilled to get to raise my kids in the environment that they are in. I think it's easy just to imagine that all these kids are spoiled and entitled. Part of what makes me be strong with my kids is the fact that I'm surrounded by other really firm strong moms.