Famous As: One of the Greatest Football Players in the History of the Sport
Born On: September 11, 1945
Born In: Munich, Germany
Age: 77 Years
Franz Beckenbauer is a distinguished former German professional footballer and manager. His elegant style, leadership and dominance on field earned him the title âDer Kaiserâ in his playing career. He is considered as one of the greatest players in the history of football. He started off his career in football as a midfielder, but made a mark as a central defender. He is also accredited for inventing the role of libero or the modern sweeper. He bagged in the title of the âEuropean Footballer of The Yearâ twice and was part of three âFIFA World Cupsâ. He also appeared more than 100 times for West Germany. Read through the compilation of quotations and sayings by Franz Beckenbauer that reflects his thoughts, opinions and views on subjects close to his heart. Take a look at the quotable quotes and thoughts by Franz Beckenbauer on football, training, positive, security, greatest, community, respect, fantastic, character, team, media, world, money etc.
Listed In:
Sportspersons 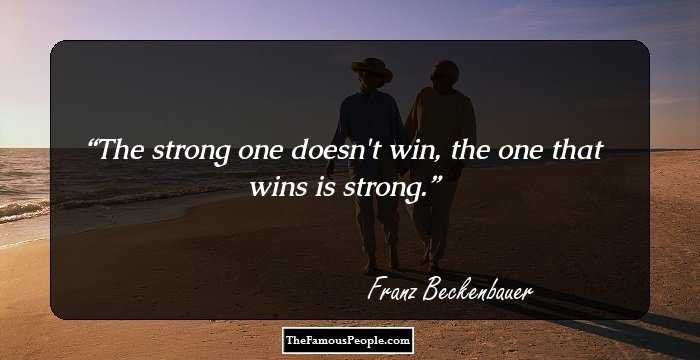 The strong one doesn't win, the one that wins is strong.

The two designs are completely different. The first is totally futuristic, the second is more classical. You can of course get very excited about doing something completely out of the ordinary, just like the Olympic stadium in its time. But each to his or her own taste. 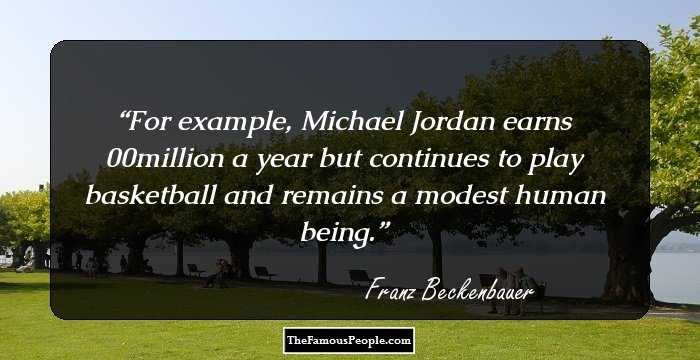 For example, Michael Jordan earns $100million a year but continues to play basketball and remains a modest human being. 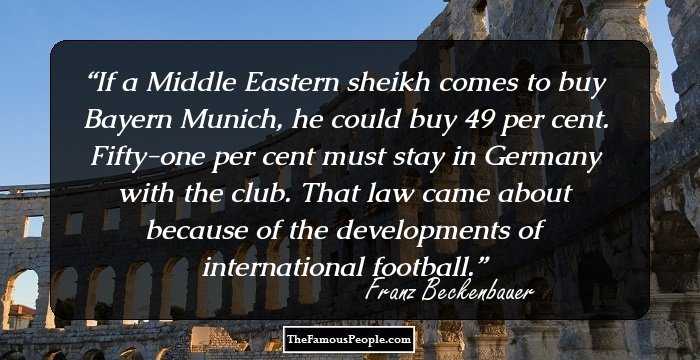 If a Middle Eastern sheikh comes to buy Bayern Munich, he could buy 49 per cent. Fifty-one per cent must stay in Germany with the club. That law came about because of the developments of international football. 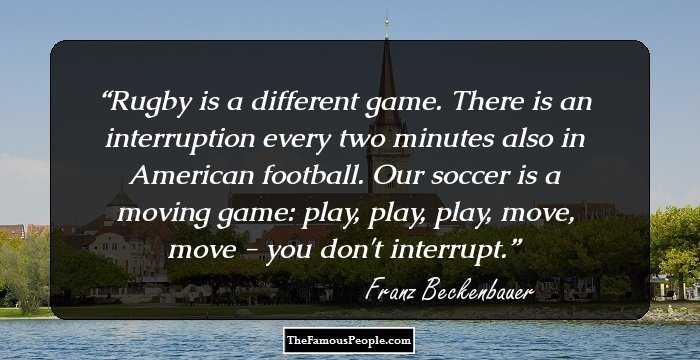 Rugby is a different game. There is an interruption every two minutes also in American football. Our soccer is a moving game: play, play, play, move, move - you don't interrupt.

The World Cup tournament overall and, naturally, the new stadiums at its heart, are the ideal platform to portray Germany as a positive and exceptional location, and above all of course, as a highly capable economic location.

It would make me a lot happier if I could meet up again next year with as many friends as possible from all over the world who I've met during my career. That's where the great opportunity lies, for me personally, in our role as World Cup host. 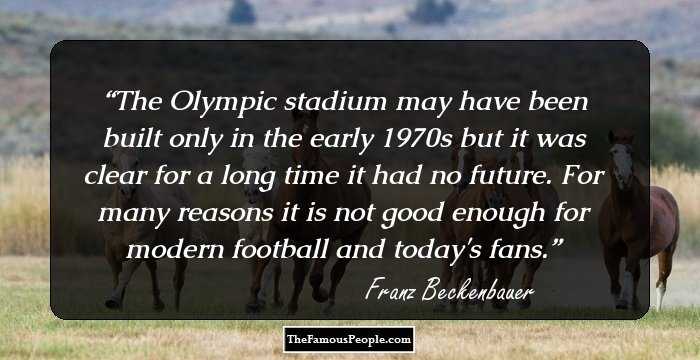 The Olympic stadium may have been built only in the early 1970s but it was clear for a long time it had no future. For many reasons it is not good enough for modern football and today's fans. 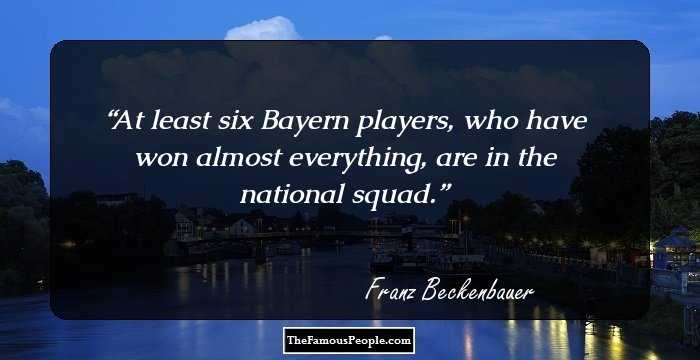 At least six Bayern players, who have won almost everything, are in the national squad. 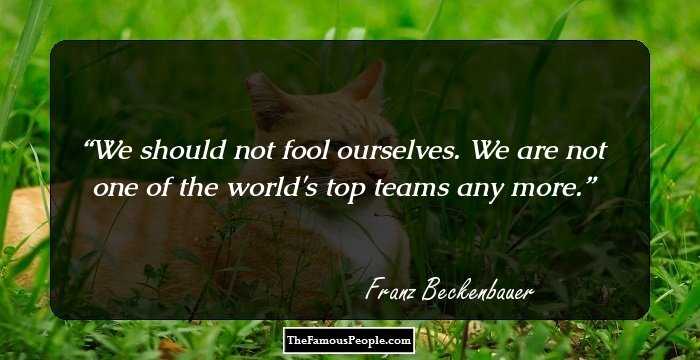 We should not fool ourselves. We are not one of the world's top teams any more.

The trouble for today's footballers is they have too many distractions. We used to get our old players coming to watch training with football magazines in their hands. Now, more often than not, they are checking the share prices. 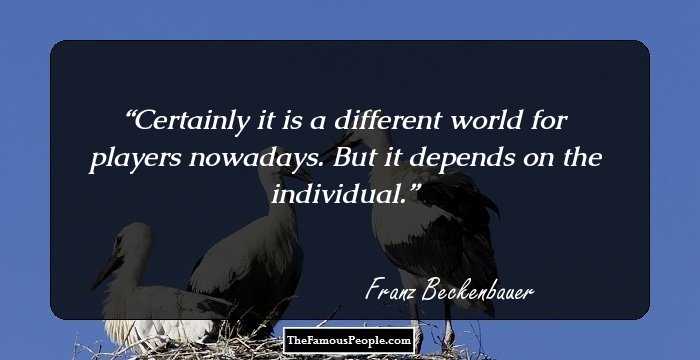 Certainly it is a different world for players nowadays. But it depends on the individual. 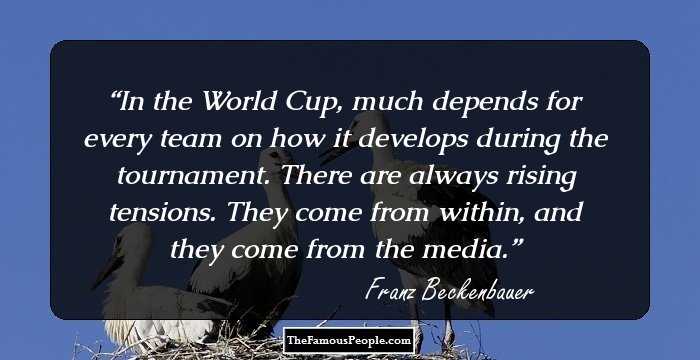 In the World Cup, much depends for every team on how it develops during the tournament. There are always rising tensions. They come from within, and they come from the media. 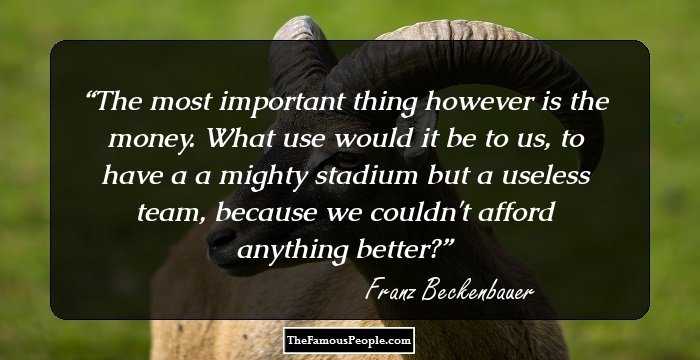 The most important thing however is the money. What use would it be to us, to have a a mighty stadium but a useless team, because we couldn't afford anything better? 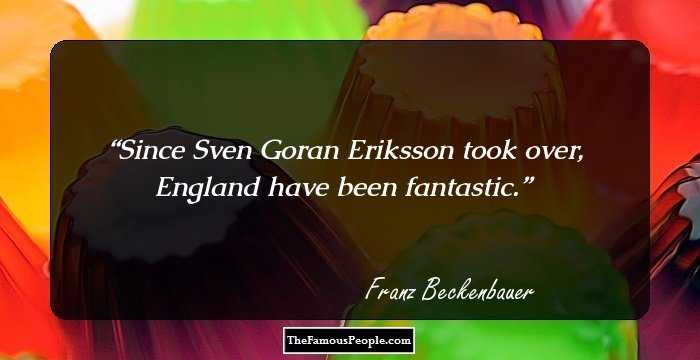 Since Sven Goran Eriksson took over, England have been fantastic. 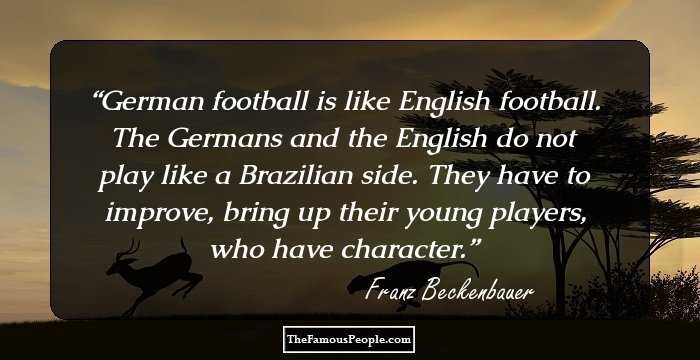 German football is like English football. The Germans and the English do not play like a Brazilian side. They have to improve, bring up their young players, who have character. 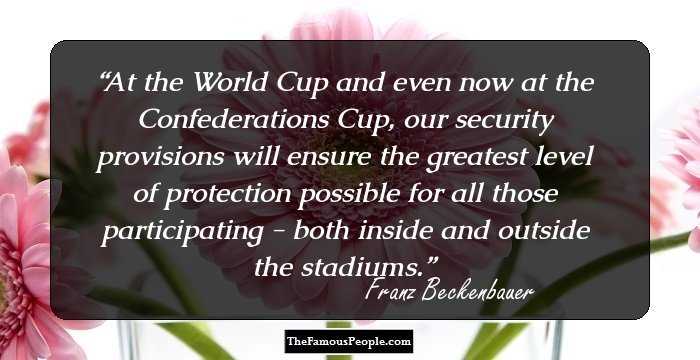 At the World Cup and even now at the Confederations Cup, our security provisions will ensure the greatest level of protection possible for all those participating - both inside and outside the stadiums. 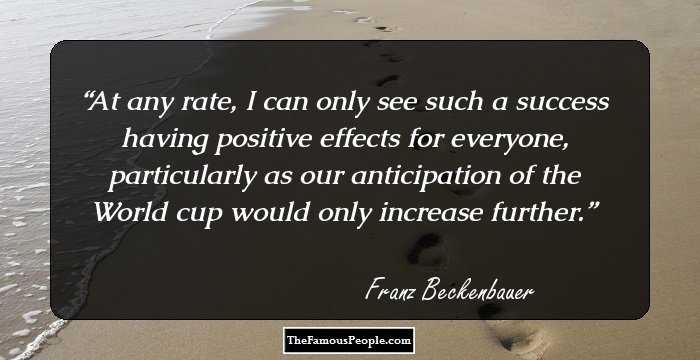 At any rate, I can only see such a success having positive effects for everyone, particularly as our anticipation of the World cup would only increase further.

I kept my speeches short as captain. I focused on the key points of the opposition of the day. As coach, I was never afraid to give long speeches to the players throughout our preparations. It was important they had all the information possible.

We are the last remaining country to allow ourselves two breaks in the season. You just have to look at England, Italy and Spain, they play right through the season. We on the other hand take six weeks off in the winter until the end of January, and that is a luxury.