26 Inspiring Quotes By Clara Barton For The Samaritan

Famous As: American Nurse Who Founded the American Red Cross
Born On: December 25, 1821
Died On: April 12, 1912
Born In: North Oxford, Oxford, Massachusetts, United States
Founder / Co Founder: American Red Cross
Died At Age: 90
The founder of âAmerican Red Crossâ, Clara Barton was a pioneering American nurse. Besides being a hospital caregiver in the American Civil War, she also played the role of a patient clerk and a teacher. During her times, there was no formal nursing education and she pursued self-taught nursing care. During the times when very few women worked outside the home, Barton did inordinate humanitarian work. She never tied the knot in her life, but received three wedding proposals and was also in an amour with John J. Elwell. She was fondly called, âThe Angel of the Battlefieldâ, and is considered to be the most respected woman in American history for the tireless and dedicated services that she offered to wounded soldiers. She was also a part of the womanâs suffrage movement. Here is a collection of quotes and sayings by the courageous woman which have been excerpted from her work and life. Let us see what we can learn from the motivational quotes and thoughts by Clara Barton.
Listed In:
Quotes by Famous People 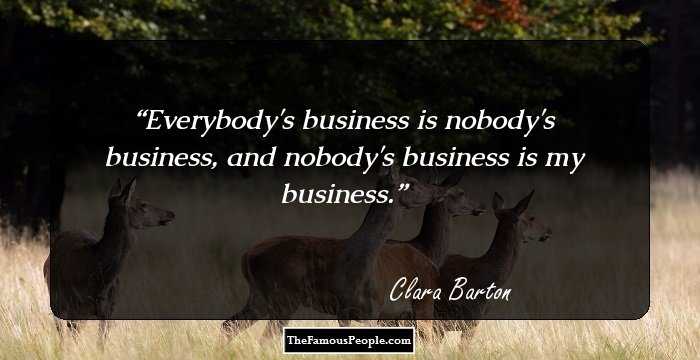 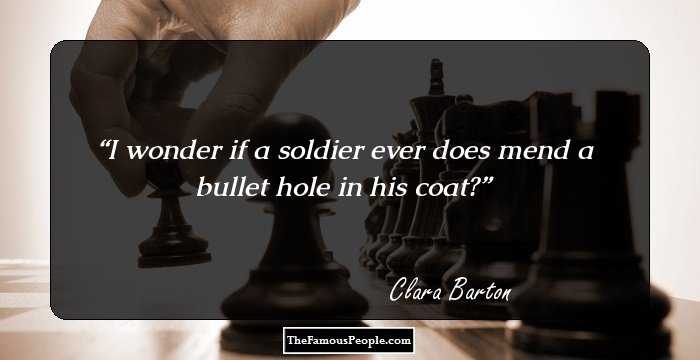 I wonder if a soldier ever does mend a bullet hole in his coat? 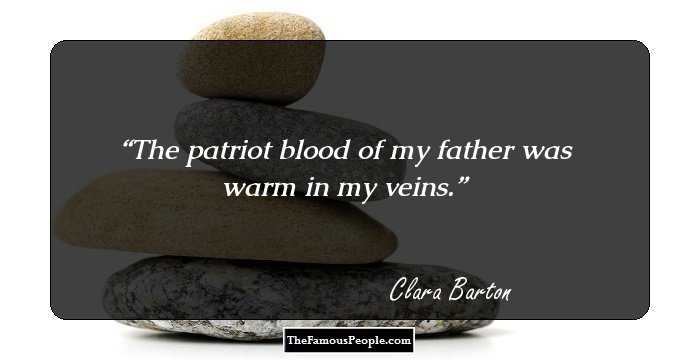 The patriot blood of my father was warm in my veins. 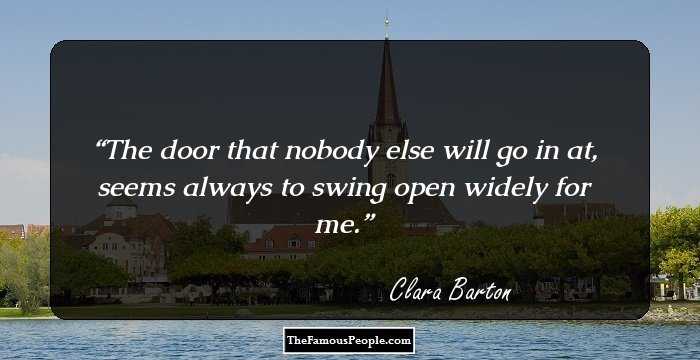 The door that nobody else will go in at, seems always to swing open widely for me.

Me Will
Clara Barton 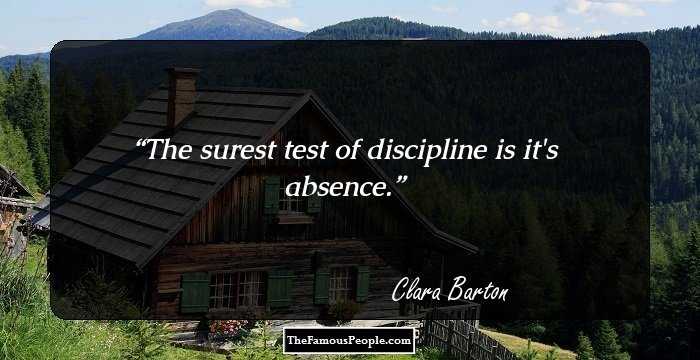 The surest test of discipline is it's absence. 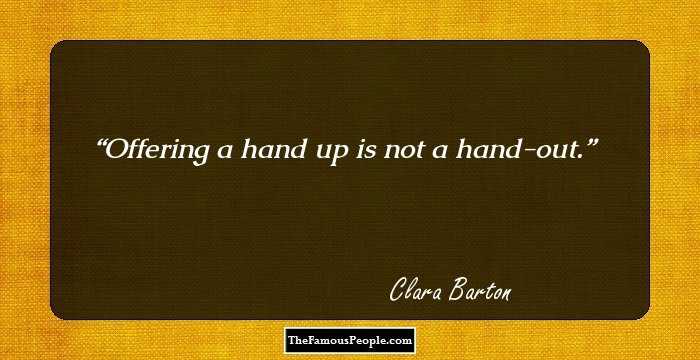 Offering a hand up is not a hand-out.

Although its growth may seem to have been slow, it is to be remembered that it is not a shrub, or plant, to shoot up in the summerand wither in the frosts. The Red Cross is a part of us--it has come to stay--and like the sturdy oak, its spreading branches shall yet encompass and shelter the relief of the nation. 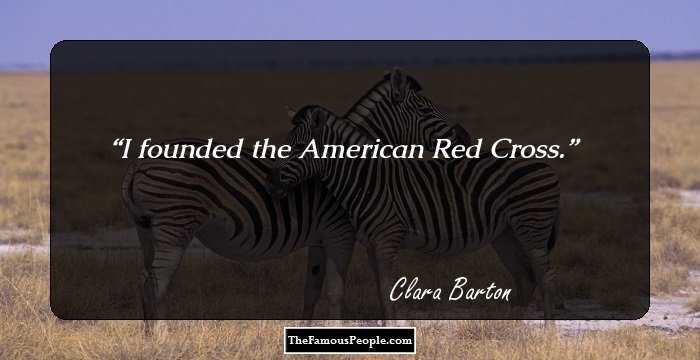 I founded the American Red Cross. 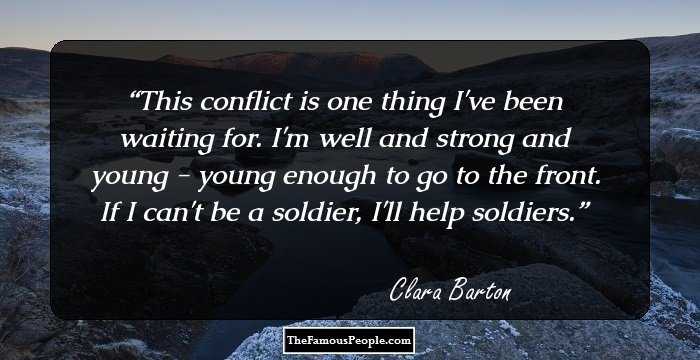 This conflict is one thing I've been waiting for. I'm well and strong and young - young enough to go to the front. If I can't be a soldier, I'll help soldiers.

People should not say that this or that is not worth learning, giving as their reason that it will not be put to use. They can no more know what information they will need in the future than they will know the weather two hundred years from today. 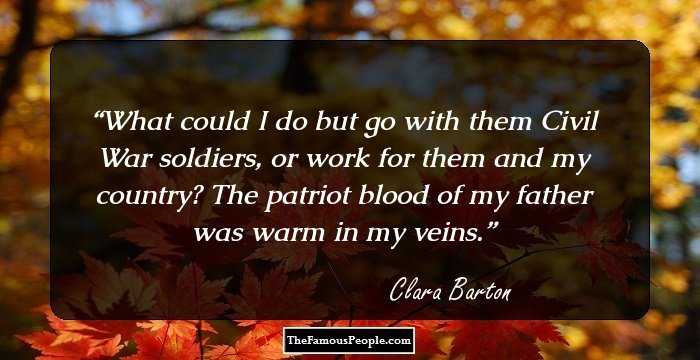 What could I do but go with them Civil War soldiers, or work for them and my country? The patriot blood of my father was warm in my veins.

If woman alone had suffered under these mistaken traditions [of women's subordination], if she could have borne the evil by herself, it would have been less pitiful, but her brother man, in the laws he created and ignorantly worshipped, has suffered with her. He has lost her highest help; he has crippled the intelligence he needed; he has belittled the very source of his own being and dwarfed the image of his Maker. 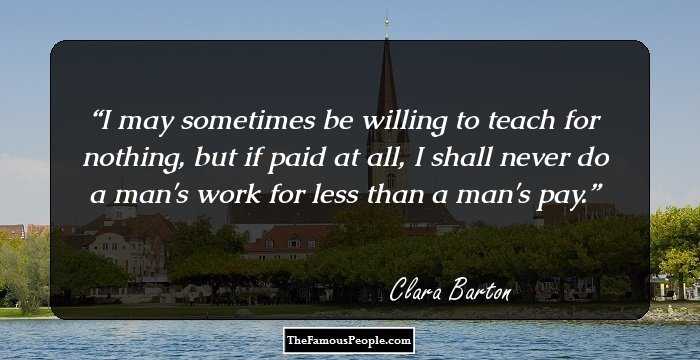 I may sometimes be willing to teach for nothing, but if paid at all, I shall never do a man's work for less than a man's pay. 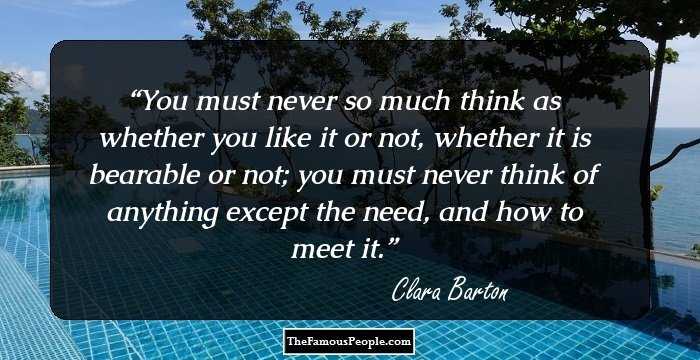 You must never so much think as whether you like it or not, whether it is bearable or not; you must never think of anything except the need, and how to meet it. 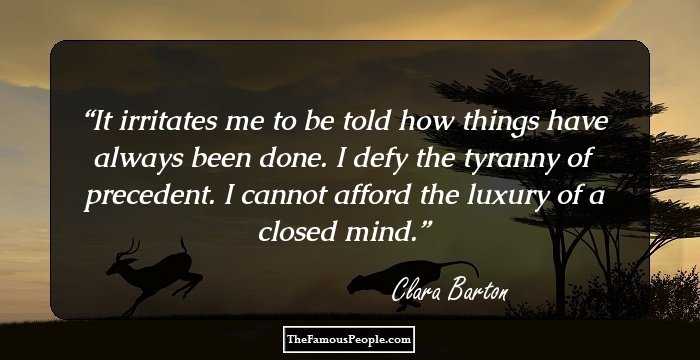 It irritates me to be told how things have always been done. I defy the tyranny of precedent. I cannot afford the luxury of a closed mind.

Me I
Clara Barton 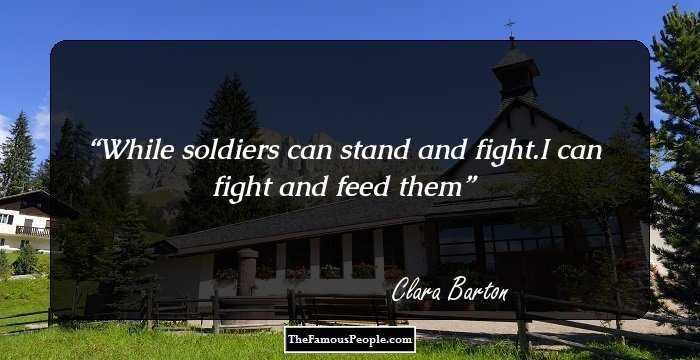 While soldiers can stand and fight.I can fight and feed them

My business is stanching blood and feeding fainting men; my post the open field between the bullet and the hospital. I sometimes discuss the application of a compress or a wisp of hay under a broken limb, but not the bearing and merits of a political movement. I make gruel--not speeches; I write letters home for wounded soldiers, not political addresses.

I have never worked for fame or praise, and shall not feel their loss as I otherwise would. I have never for a moment lost sight of the humble life I was born to, its small environments, and the consequently little right I had to expect much of myself, and shall have the less to censure, or upbraid myself with for the failures I must see myself make. 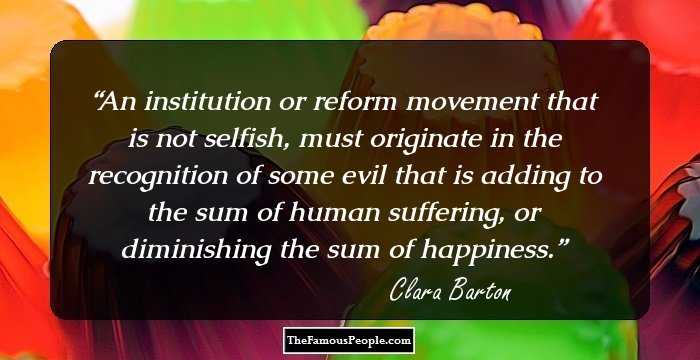 An institution or reform movement that is not selfish, must originate in the recognition of some evil that is adding to the sum of human suffering, or diminishing the sum of happiness.

I don't know how long it has been since my ear has been free from the roll of a drum. It is the music I sleep by, and I love it.... I shall remain here while anyone remains, and do whatever comes to my hand. I may be compelled to face danger, but never fear it, and while our soldiers can stand and fight, I can stand and feed and nurse them.

A ball had passed between my body and the right arm which supported him, cutting through the sleeve and passing through his chest from shoulder to shoulder. There was no more to be done for him and I left him to his rest. I have never mended that hole in my sleeve. 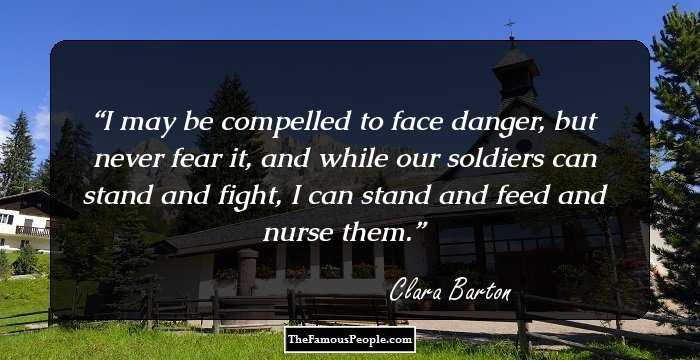 If I were to speak of war, it would not be to show you the glories of conquering armies but the mischief and misery they strew in their tracks; and how, while they marched on with tread of iron and plumes proudly tossing in the breeze, some one must follow closely in their steps, crouching to the earth, toiling in the rain and darkness, shelterless themselves, with no thought of pride or glory, fame or praise, or reward; hearts breaking with pity, faces bathed in tears and hands in blood. This is the side which history never shows.

The Red Cross in its nature, it aims and purposes, and consequently, its methods, is unlike any other organization in the country.It is an organization of physical action, of instantaneous action, at the spur of the moment; it cannot await the ordinary deliberation of organized bodies if it would be of use to suffering humanity,[ellipsis in original] it has by its nature a field of its own. 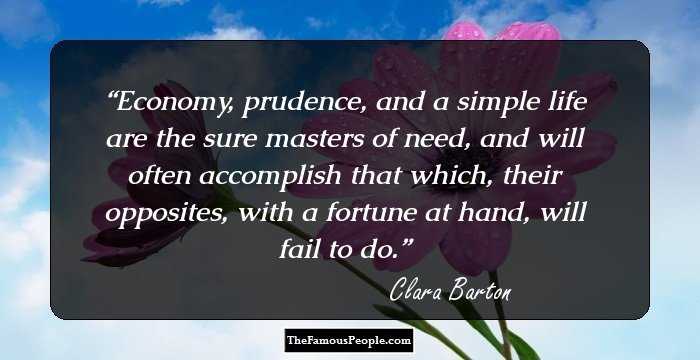 Economy, prudence, and a simple life are the sure masters of need, and will often accomplish that which, their opposites, with a fortune at hand, will fail to do.

I have an almost complete disregard of precedent, and a faith in the possibility of something better. It irritates me to be told how things have always been done. I defy the tyranny of precedent. I go for anything new that might improve the past.

Me Past I
Clara Barton