Famous As: General Secretary of the Communist Party of China
Born On: June 15, 1953
Born In: Beijing, China
Age: 69 Years
Xi Jinping is the current President of Peopleâs Republic of China and the general secretary of the Communist Party of China. Known as a hardcore nationalist and a strong leader, Xi is sometimes criticized for his support for the censorship of internet. He is credited for Chinaâs rise as one of the world leaders. In 2018, he was named by the Forbes magazine as the most powerful leader in the world. Also known as an eloquent speaker, Xi Jinping is known for his fiery speeches and hardcore sentiments of patriotism that reflect in his quotes. We have collected the best Xi Jinping quotes about peace, world, China, development, communism and country taken from his speeches, books and interviews.
Listed In:
Leaders 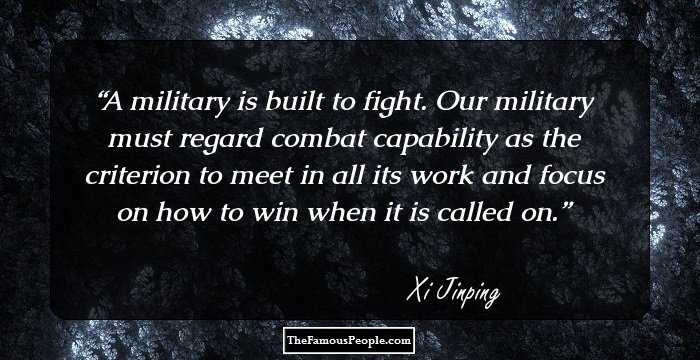 A military is built to fight. Our military must regard combat capability as the criterion to meet in all its work and focus on how to win when it is called on. 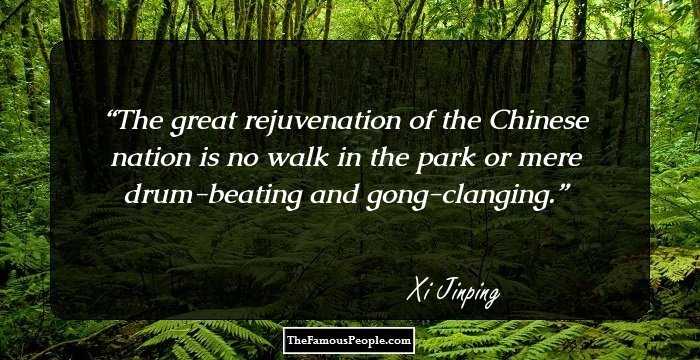 The great rejuvenation of the Chinese nation is no walk in the park or mere drum-beating and gong-clanging. 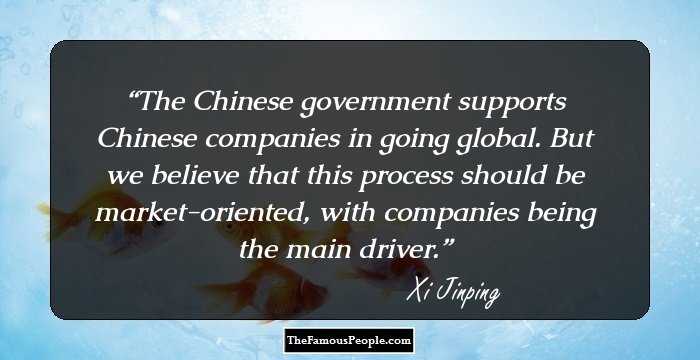 The Chinese government supports Chinese companies in going global. But we believe that this process should be market-oriented, with companies being the main driver. 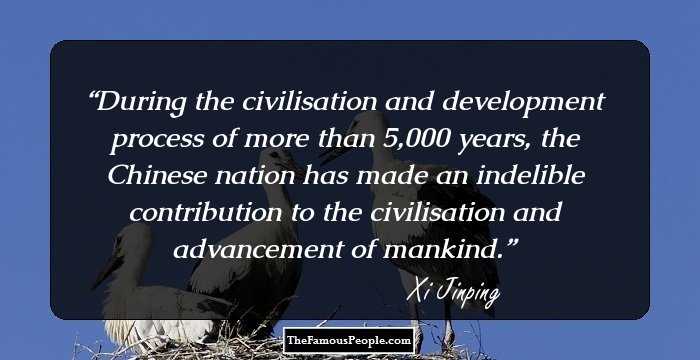 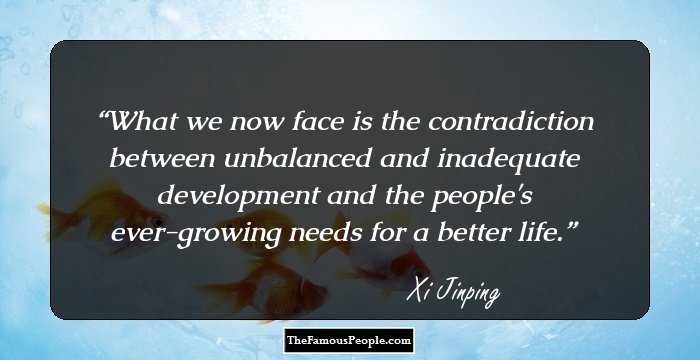 What we now face is the contradiction between unbalanced and inadequate development and the people's ever-growing needs for a better life. 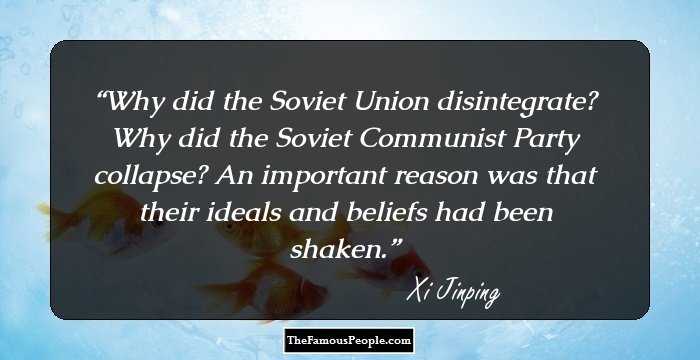 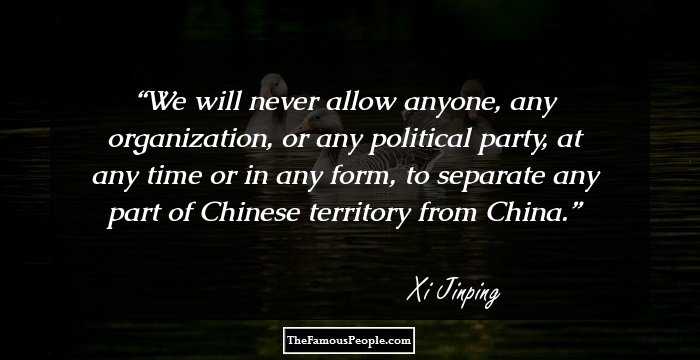 We will never allow anyone, any organization, or any political party, at any time or in any form, to separate any part of Chinese territory from China. 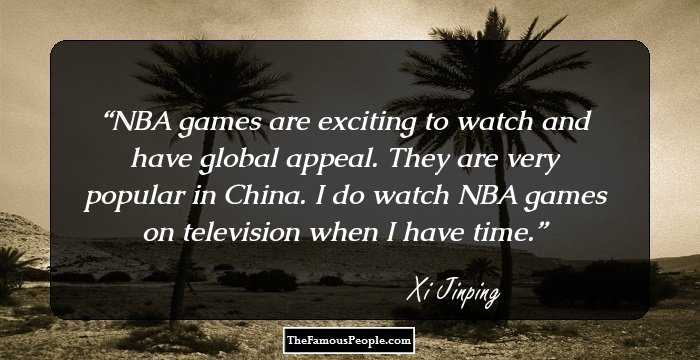 NBA games are exciting to watch and have global appeal. They are very popular in China. I do watch NBA games on television when I have time. 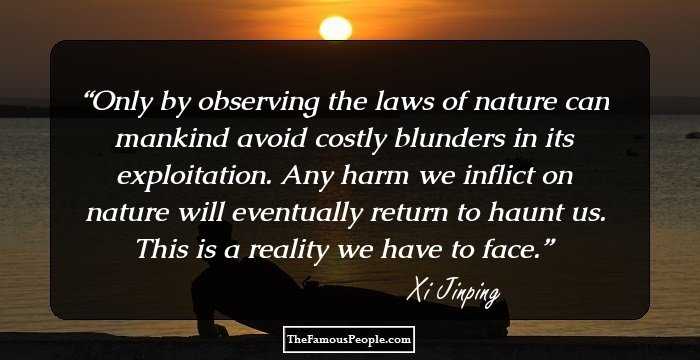 Only by observing the laws of nature can mankind avoid costly blunders in its exploitation. Any harm we inflict on nature will eventually return to haunt us. This is a reality we have to face. 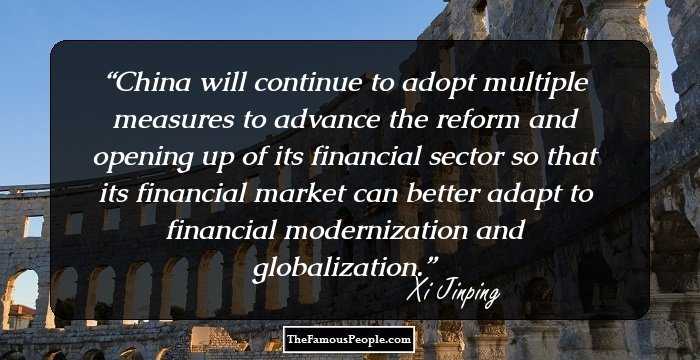 China will continue to adopt multiple measures to advance the reform and opening up of its financial sector so that its financial market can better adapt to financial modernization and globalization. 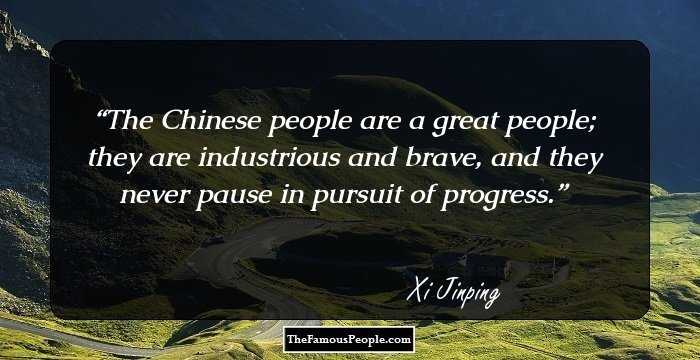 The Chinese people are a great people; they are industrious and brave, and they never pause in pursuit of progress. 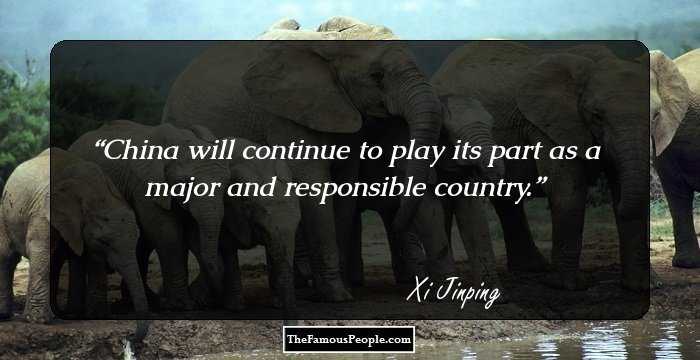 China will continue to play its part as a major and responsible country. 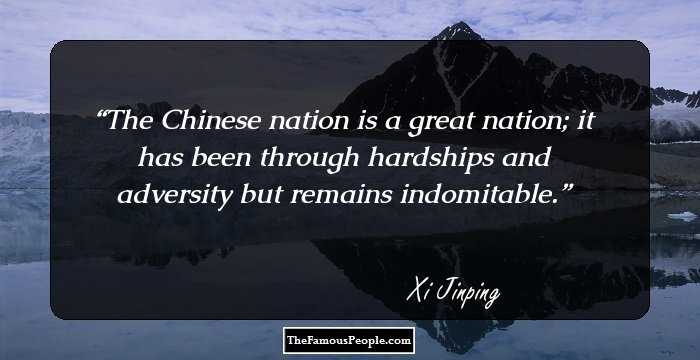 The Chinese nation is a great nation; it has been through hardships and adversity but remains indomitable. 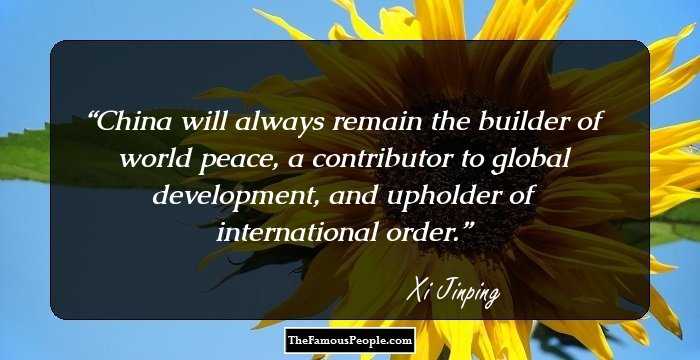 China will always remain the builder of world peace, a contributor to global development, and upholder of international order.

I like sports, and swimming is my favorite. Doing physical exercises keeps one fit and healthy and helps one work more efficiently. I think we all need to strike a balance between work and relaxation. This can keep us energetic and help us do our job better.

China is ready to pursue cooperation of various forms with the U.K. and other countries in international production capacity and equipment manufacturing to synergize our respective strengths and promote each other's development.

Our responsibility is to rally and lead the whole party and the Chinese people of all ethnic groups, take up this historic baton and continue working hard for the great renewal of the Chinese nation, so that we will stand rock firm in the family of nations and make fresh and greater contribution to mankind.

We must uphold the fighting of tigers and flies at the same time, resolutely investigating law-breaking cases of leading officials and also earnestly resolving the unhealthy tendencies and corruption problems which happen all around people.

As economic globalization gathers momentum, China and the United States have become highly interdependent economically. Such economic relations would not enjoy sustained, rapid growth if they were not based on mutual benefit or if they failed to deliver great benefits to the United States.

In the modern era, our nation experienced constant hardship and difficulties. The Chinese nation reached the most dangerous period. Since then, countless people with lofty ideals to realise the great revival of the Chinese nation rose to resist and fight, but failed one time after another.

The vast Pacific Ocean has ample space for China and the United States. We welcome a constructive role by the United States in promoting peace, stability and prosperity in the region. We also hope that the United States will fully respect and accommodate the major interests and legitimate concerns of Asia-Pacific countries.

During the long process of history, by relying on our own diligence, courage and wisdom, Chinese people have opened up a good and beautiful home where all ethnic groups live in harmony and fostered an excellent culture that never fades.

It is true that some people have some misgivings about China-U.K. cooperation. What I want to stress is that in today's world, no country can afford to pursue development with its door closed. One should open the door, warmly welcome friends, and be hospitable to them.