Famous As: Russian Painter, Art Theorist and a Pioneer in Abstract Art
Born On: December 16, 1866
Died On: December 13, 1944
Born In: Moscow, Russia
Died At Age: 77
Wassily Kandinsky was a prominent avant-garde Russian artist known as the founder of pure abstraction work in the 20th century. He was born in a family of artists and was introduced to arts early on in his life. He was a born artist as his works proved to be incredible for his age. During the initial days of his career, he worked as a lawyer but soon moved to pursue his childhood passion of painting. He joined a renowned art school where he extensively experimented with colors inventing many unconventional art forms. His paintings were believed to be influenced by spirituality and also aimed at relating music with color. These theories were highly influential and soon he became popular in the art world. He attracted various students to his regular art classes where he taught his theories of art. He moved back to Russia before the First World War where his paintings were highly influenced by the constructivist movement. His works and thoughts are believed to lay the philosophical foundation to various modern movements and have also inspired some of the legendary modern artists like âArshile Gorky'sâ and âJackson Pollockâ. Read on a compilation of sayings and quotations by the great painter which have been curated from his life and work. Go through these quotes and thoughts by Wassily Kandinsky who has beautifully drawn a relation between life and art.
Listed In:
Painters 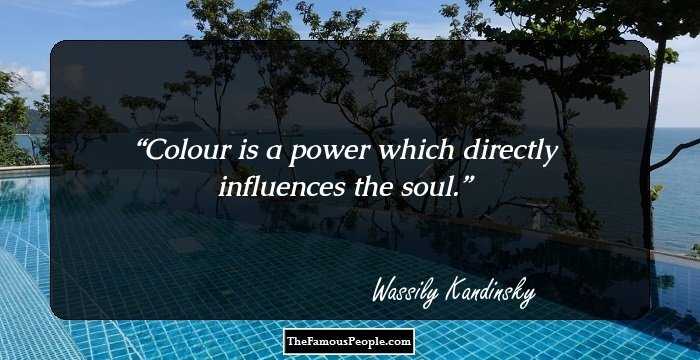 Colour is a power which directly influences the soul. 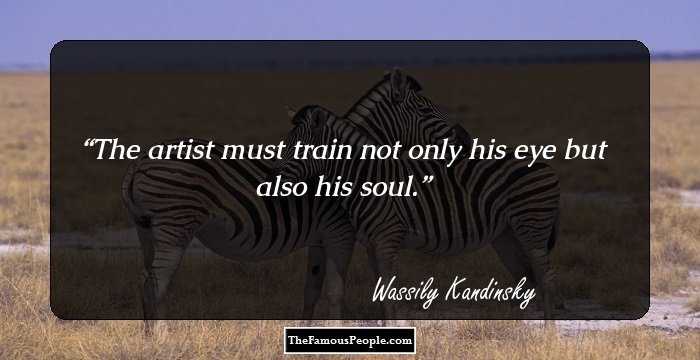 The artist must train not only his eye but also his soul. 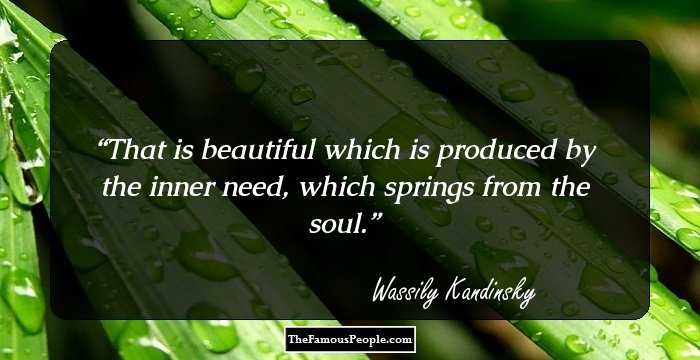 That is beautiful which is produced by the inner need, which springs from the soul. 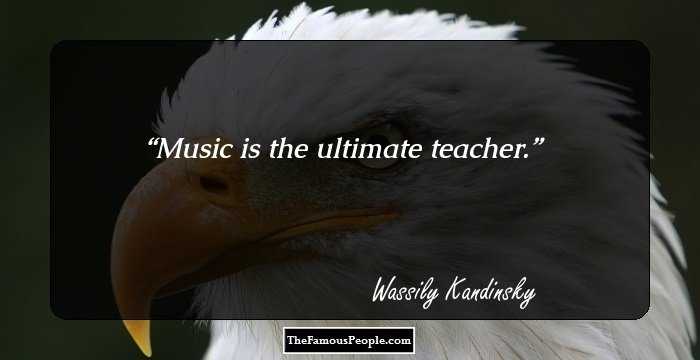 Music is the ultimate teacher. 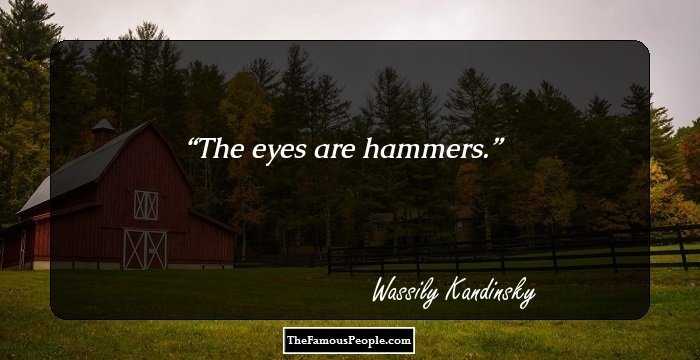 The eyes are hammers. 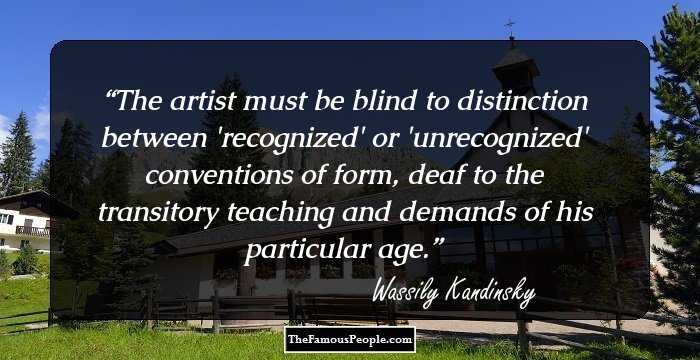 The artist must be blind to distinction between 'recognized' or 'unrecognized' conventions of form, deaf to the transitory teaching and demands of his particular age. 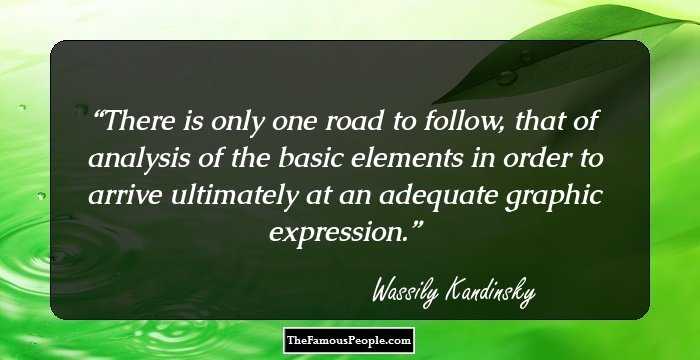 There is only one road to follow, that of analysis of the basic elements in order to arrive ultimately at an adequate graphic expression. 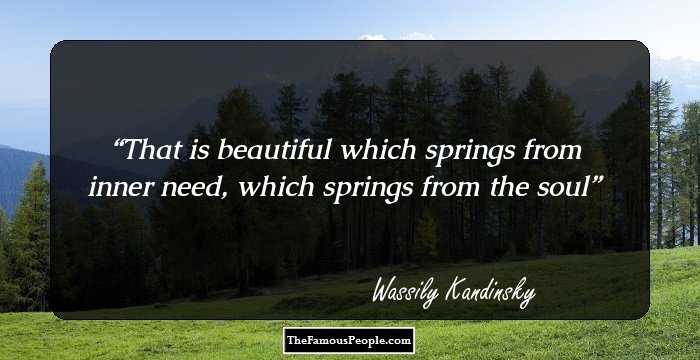 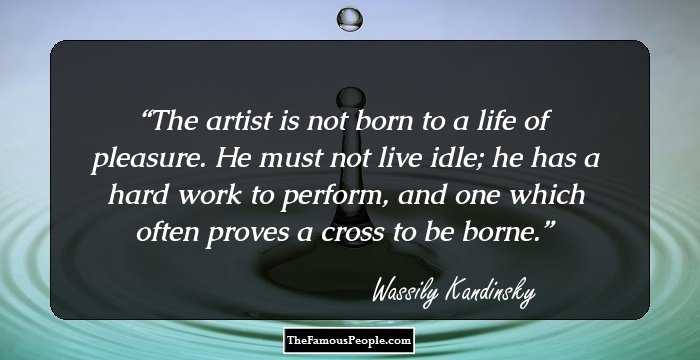 The artist is not born to a life of pleasure. He must not live idle; he has a hard work to perform, and one which often proves a cross to be borne. 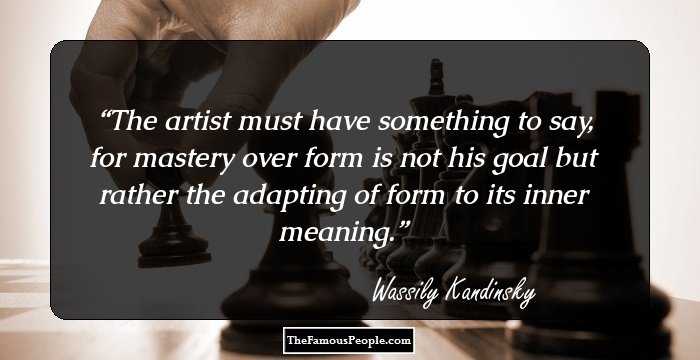 The artist must have something to say, for mastery over form is not his goal but rather the adapting of form to its inner meaning. 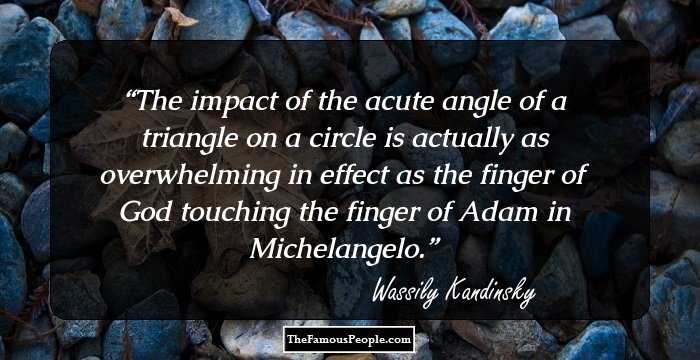 The impact of the acute angle of a triangle on a circle is actually as overwhelming in effect as the finger of God touching the finger of Adam in Michelangelo. 30 Notable Quotes By Kazimir Malevich, The Founder Of Suprematism 24 Insightful Quotes By Charles Alston For The Portraitist In You