From desiring to become a chef due to his love for food, to becoming one of the most successful A-listers of Hollywood, Tobey Maguire has gone through a lot to become the person that he is now. Turning into an international star with the modern superhero classic Sam Raimiâs âSpider-Manâ trilogy, Toby has also appeared in many other critically and commercially acclaimed films. Known as a versatile actor, Toby has donned many avatars during his acting career with films such as âBrothersâ, âSeabiscuitâ and âThe Great Gatsby.â Known to be a simple man, away from the quirks of the alluring shine and glitter of the American film industry, Toby has followed a simple route to success. Taken from his interviews, articles, and talk show appearances, many of his quotes that we have compiled are inspirational, motivational, sometimes even funny, but mostly, enchanting. A look at some of Tobey Maguireâs quotes on character, soul, social, relationships, ideas, beliefs, ambition, etc. 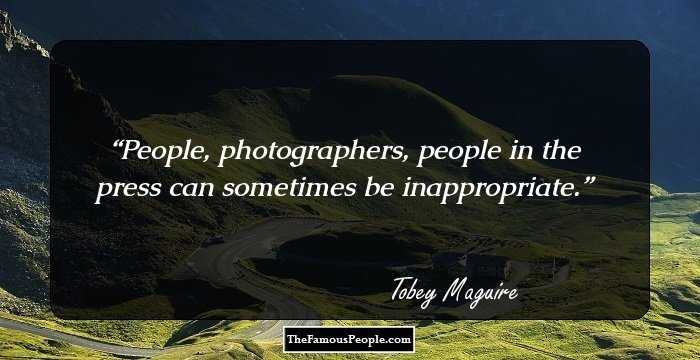 People, photographers, people in the press can sometimes be inappropriate. 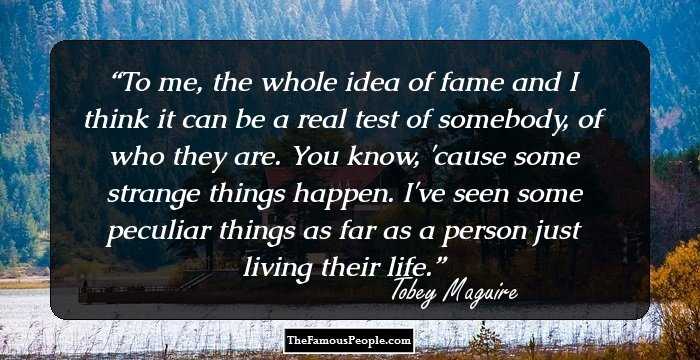 To me, the whole idea of fame and I think it can be a real test of somebody, of who they are. You know, 'cause some strange things happen. I've seen some peculiar things as far as a person just living their life. 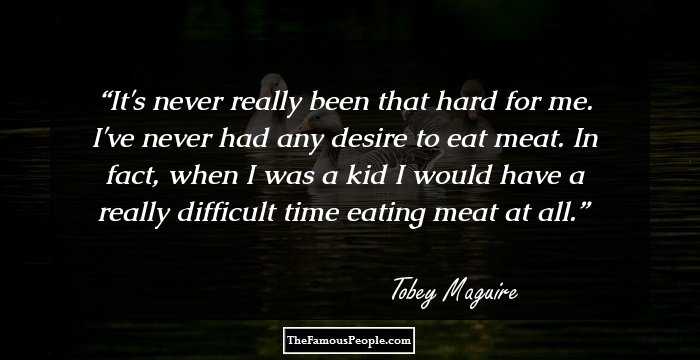 It's never really been that hard for me. I've never had any desire to eat meat. In fact, when I was a kid I would have a really difficult time eating meat at all. 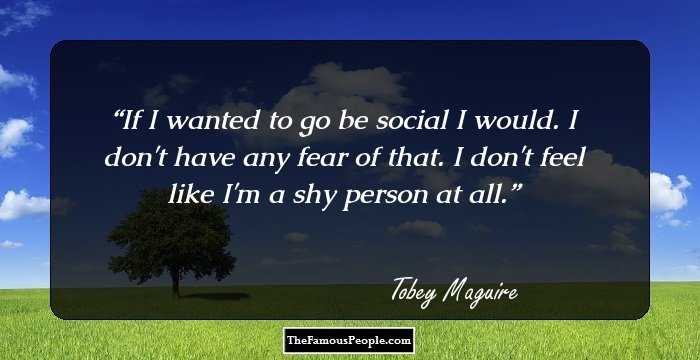 If I wanted to go be social I would. I don't have any fear of that. I don't feel like I'm a shy person at all. 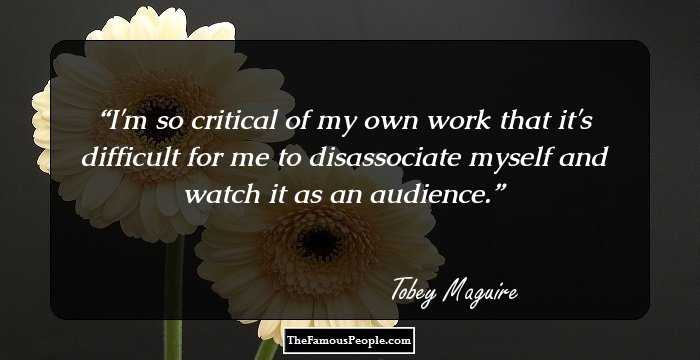 I'm so critical of my own work that it's difficult for me to disassociate myself and watch it as an audience. 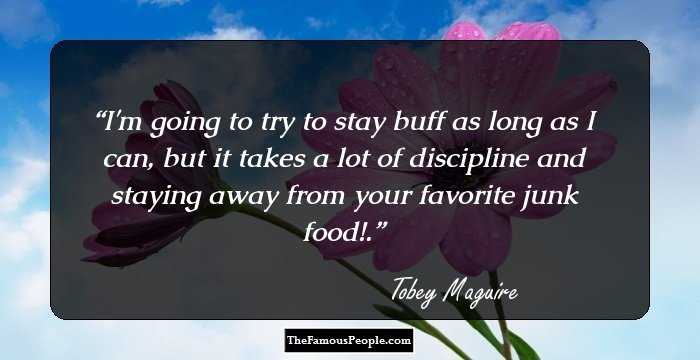 I'm going to try to stay buff as long as I can, but it takes a lot of discipline and staying away from your favorite junk food!. 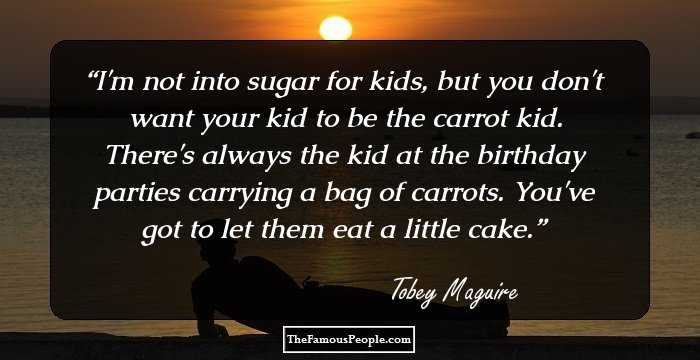 I'm not into sugar for kids, but you don't want your kid to be the carrot kid. There's always the kid at the birthday parties carrying a bag of carrots. You've got to let them eat a little cake. 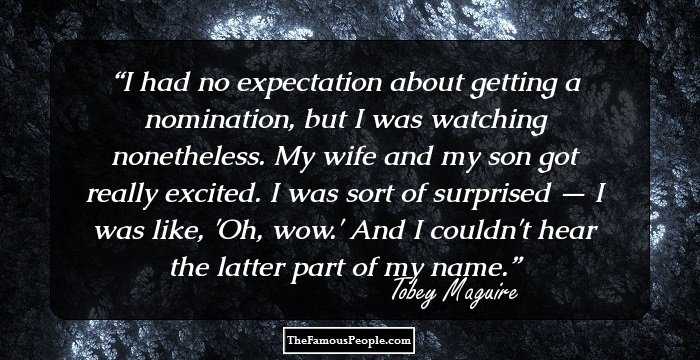 I had no expectation about getting a nomination, but I was watching nonetheless. My wife and my son got really excited. I was sort of surprised â I was like, 'Oh, wow.' And I couldn't hear the latter part of my name. 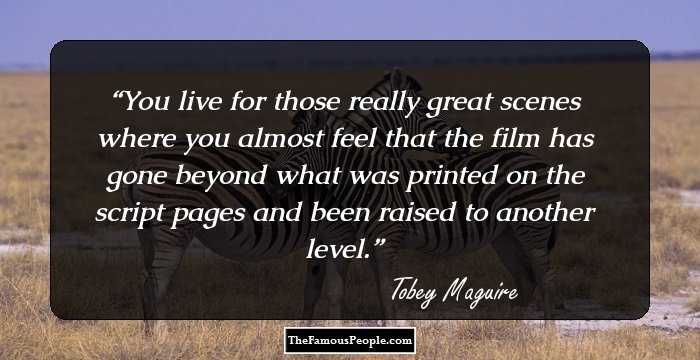 You live for those really great scenes where you almost feel that the film has gone beyond what was printed on the script pages and been raised to another level. 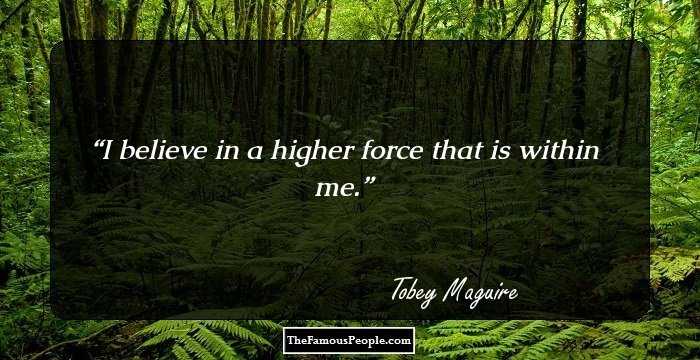 I believe in a higher force that is within me. 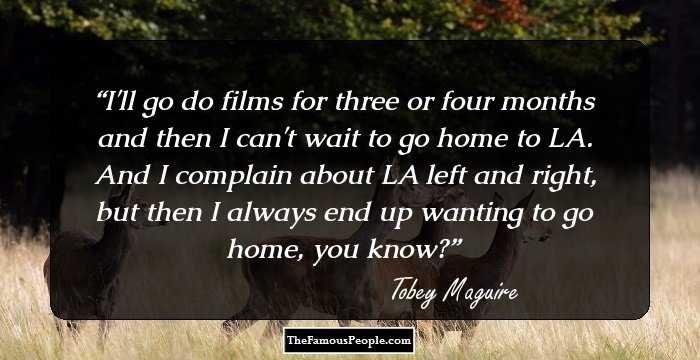 I'll go do films for three or four months and then I can't wait to go home to LA. And I complain about LA left and right, but then I always end up wanting to go home, you know? 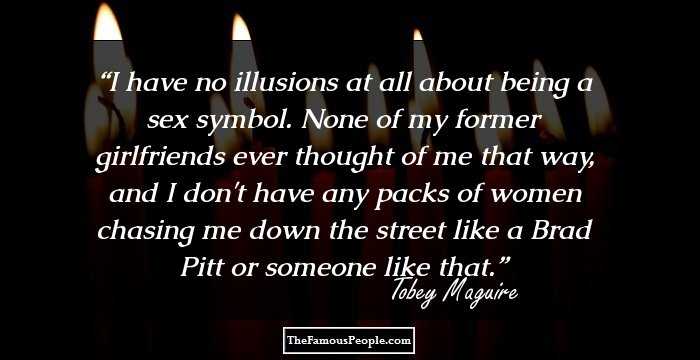 I have no illusions at all about being a sex symbol. None of my former girlfriends ever thought of me that way, and I don't have any packs of women chasing me down the street like a Brad Pitt or someone like that. 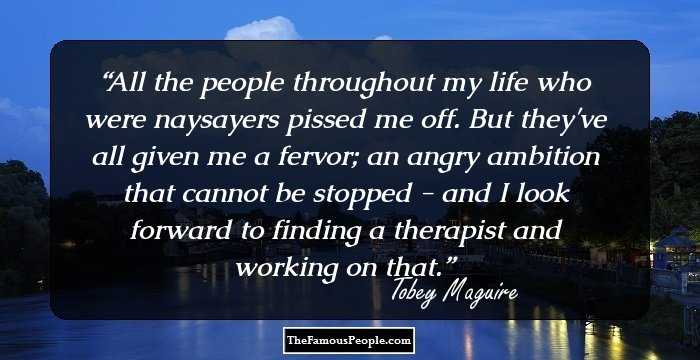 All the people throughout my life who were naysayers pissed me off. But they've all given me a fervor; an angry ambition that cannot be stopped - and I look forward to finding a therapist and working on that. 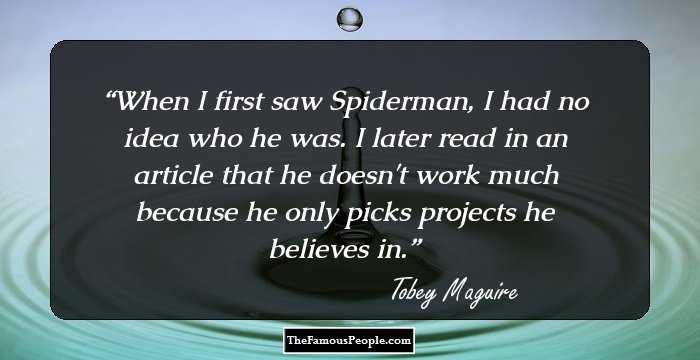 When I first saw Spiderman, I had no idea who he was. I later read in an article that he doesn't work much because he only picks projects he believes in. 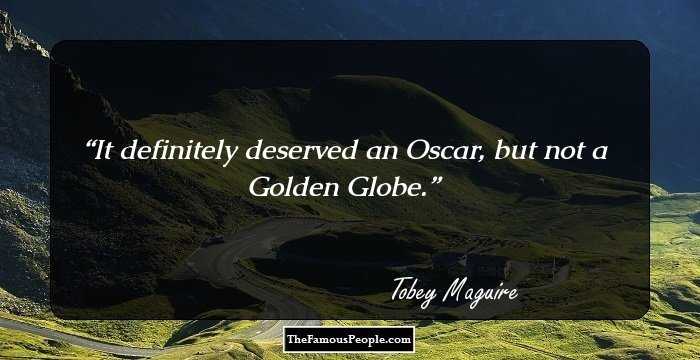 It definitely deserved an Oscar, but not a Golden Globe. 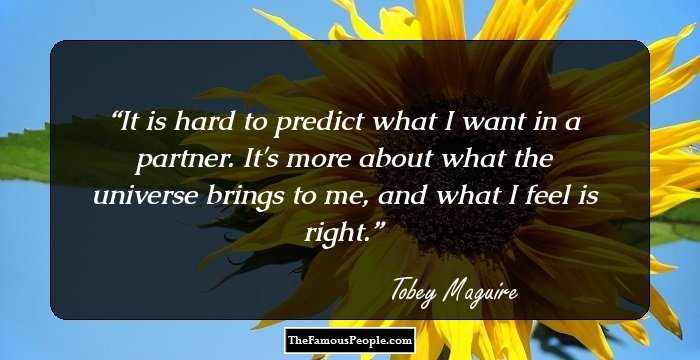 It is hard to predict what I want in a partner. It's more about what the universe brings to me, and what I feel is right. 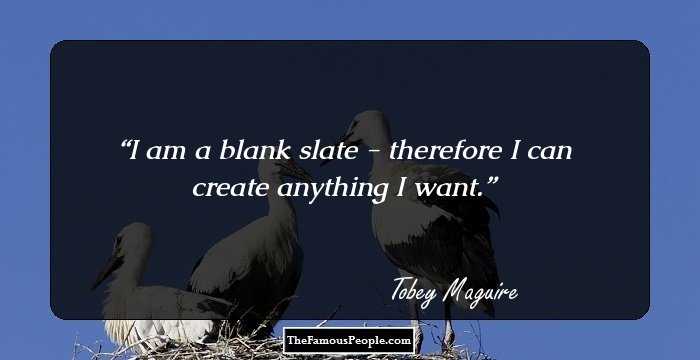 I am a blank slate - therefore I can create anything I want. 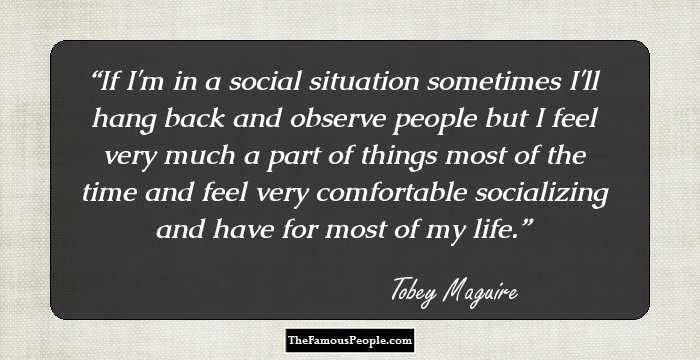 If I'm in a social situation sometimes I'll hang back and observe people but I feel very much a part of things most of the time and feel very comfortable socializing and have for most of my life. 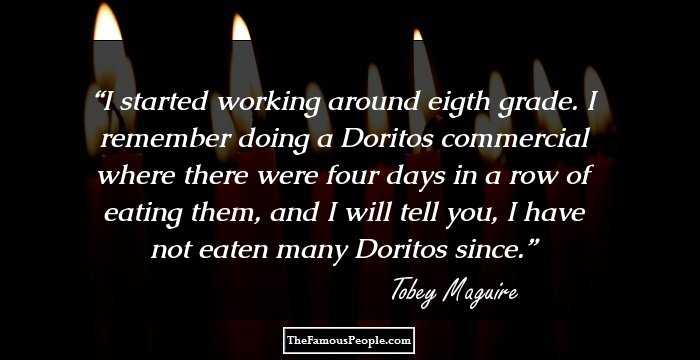 I started working around eigth grade. I remember doing a Doritos commercial where there were four days in a row of eating them, and I will tell you, I have not eaten many Doritos since. 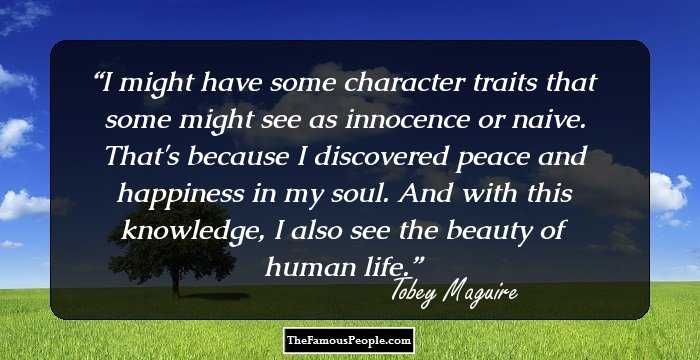 I might have some character traits that some might see as innocence or naive. That's because I discovered peace and happiness in my soul. And with this knowledge, I also see the beauty of human life. 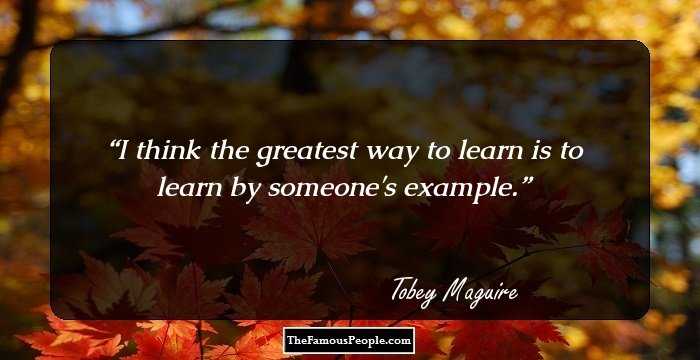 I think the greatest way to learn is to learn by someone's example.

I felt like I was an outsider. I think what happened to me made me develop this street sense of watching people and working out what made them tick, wondering whether I could trust them or not. I went to a lot of schools along the coast in California, made few friends and stayed with aunts, uncles and grandparents while my folks tried to make ends meet. It was tough. We had no money.

I'm close to being a vegan, but I'm not one, technically. I don't eat eggs, or nearly any dairy - no cheese or milk. I do eat honey, and a piece of milk chocolate here and there. It's never really been that hard for me. I've never had any desire to eat meat. In fact, when I was a kid I would have a really difficult time eating meat at all. It had to be the perfect bite, with no fat or gristle or bone or anything like that. I don't judge people who eat meat - that's not for me to say - but the whole thing just sort of bums me out.

The most attention I get is in a book store or video shop when I go to the foreign film section. Sometimes that can be fun, but usually those women want to talk about philosophy or something very dense. It's not like they're tearing off my shirt, you know.

I just try to try to keep an attitude that I don't know what I'm doing. Not to the point where I'm beating myself up, but I just go in thinking that I have a lot to learn. And I hope I still have that attitude 30 years from now.

There's so many things I want to do. I want to work with great filmmakers, great actors, great scripts. And there's no reason for me to do anything short of that, because I'm 24, I don't have a family, I don't need to make tons of money, and I'm not dying to get famous.

If you're sitting in the audience, you probably can't see the preparation and work that goes into creating a great scene or a great part, but I can assure you that a good film depends on lot of different things falling perfectly into place.