Famous As: Canadian novelist
Born On: October 30, 1930
Died On: June 21, 2002
Born In: Toronto, Ontario
Died At Age: 71
Timothy Findley was a well-acclaimed Canadian novelist and playwright known for his proficient writing in various genres. He started learning dancing and acting at an early age but his success as an actor was short lived. He joined the Stratford Festival Company and did prominent roles in some popular plays. He further went on to publish his first short story titled âTamarack Reviewâ. This was appreciated by the masses which motivated him to further write novels. His first two novels titled âThe Last Of The Crazy Peopleâ and âThe Butterfly Plagueâ fascinated the masses with its expressive style of writing and for using an extensive vocabulary. This was followed by the two most notable novels of his life titled âThe Warsâ and âFamous Last Wordsâ (1981). These novels turned out to be a great success and âThe Warsâ brought him the âGovernor Generalâs Award For Fictionâ. He even managed to be a successful scriptwriter and was honored with the âACTRA Award for writing the script of the series âThe National Dreamâ. Go through the famous quotes and sayings by the renowned writer which have been compiled from his writings. Read on the compilation of quotations and thoughts by Timothy Findley.
Listed In:
Writers 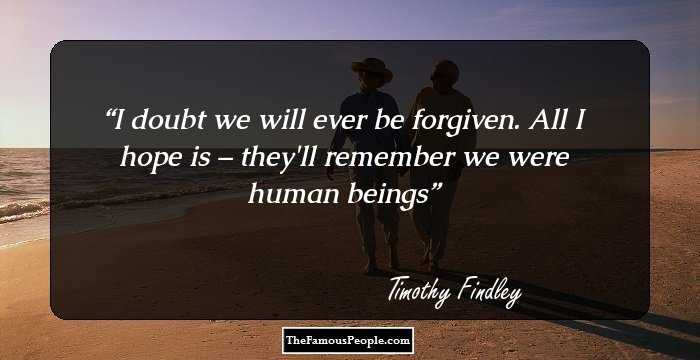 I doubt we will ever be forgiven. All I hope is – they'll remember we were human beings

Will Hope I
Timothy Findley 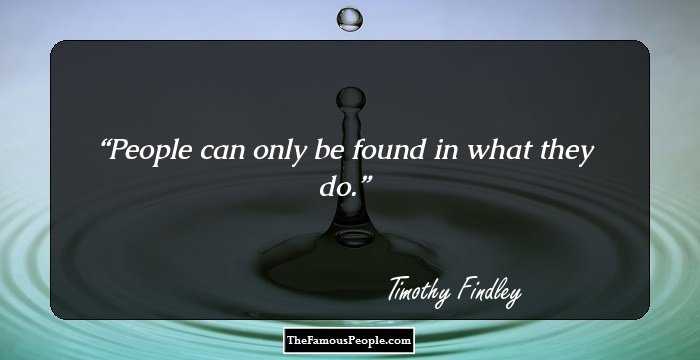 People can only be found in what they do. 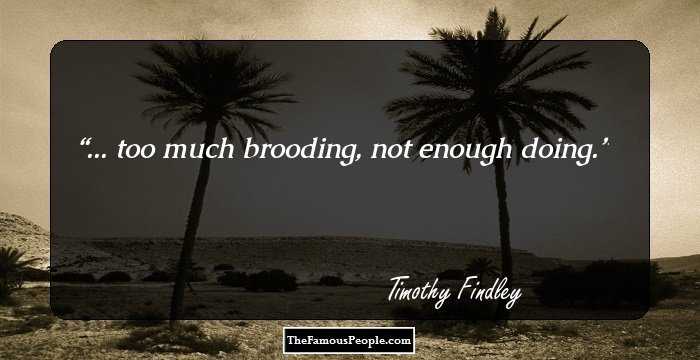 ... too much brooding, not enough doing. 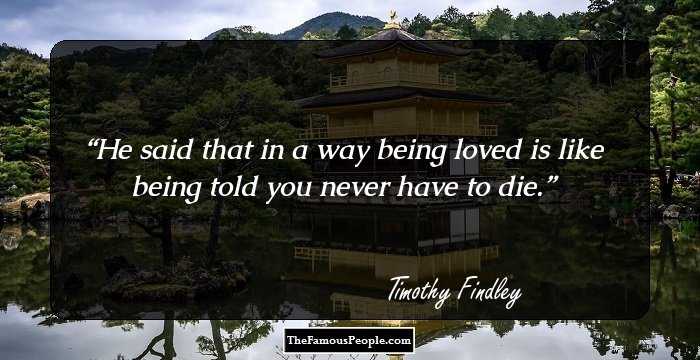 He said that in a way being loved is like being told you never have to die. 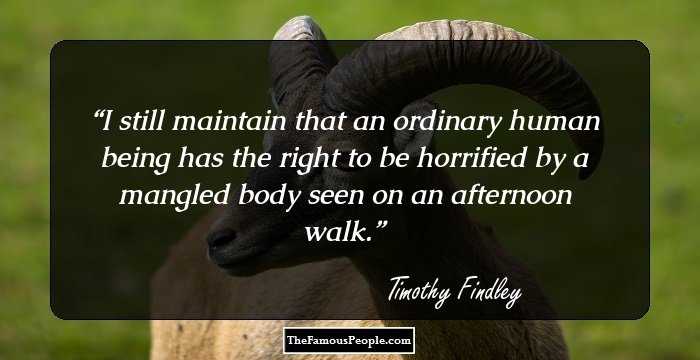 I still maintain that an ordinary human being has the right to be horrified by a mangled body seen on an afternoon walk. 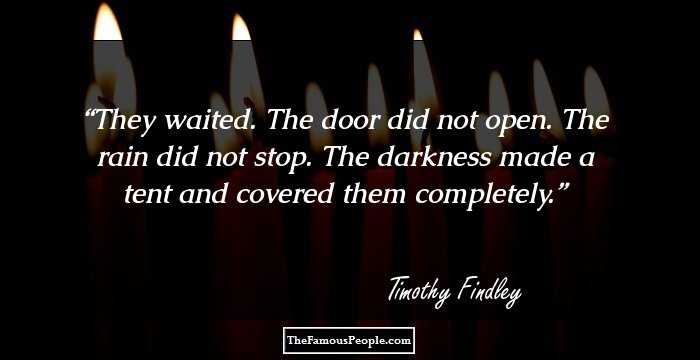 They waited. The door did not open. The rain did not stop. The darkness made a tent and covered them completely. 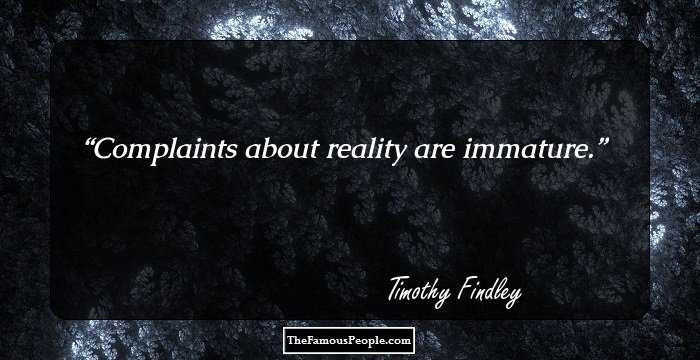 Complaints about reality are immature. 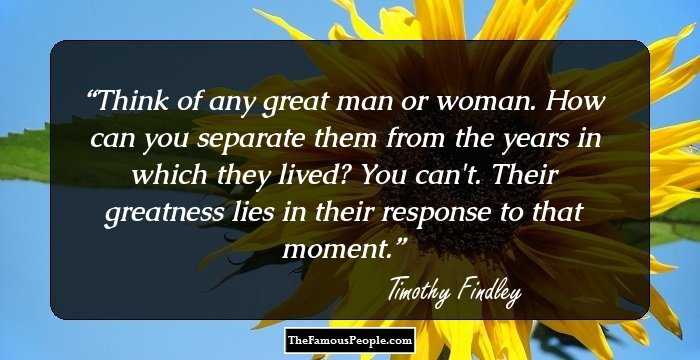 Think of any great man or woman. How can you separate them from the years in which they lived? You can't. Their greatness lies in their response to that moment. 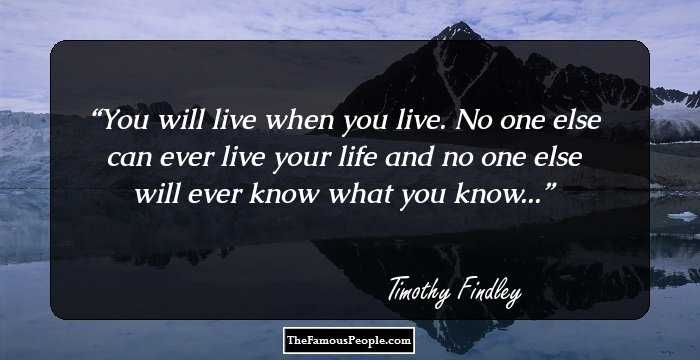 You will live when you live. No one else can ever live your life and no one else will ever know what you know...

You Life Will
Timothy Findley 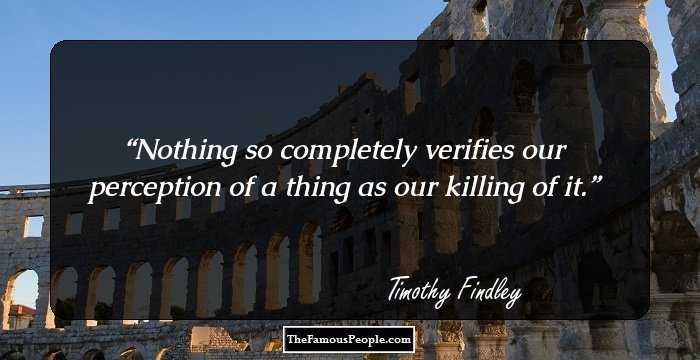 Nothing so completely verifies our perception of a thing as our killing of it. 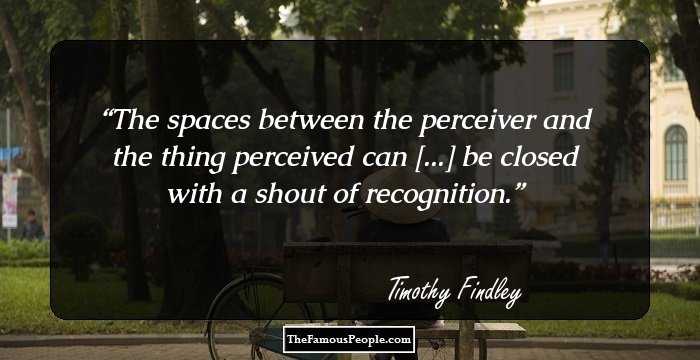 The spaces between the perceiver and the thing perceived can [...] be closed with a shout of recognition. 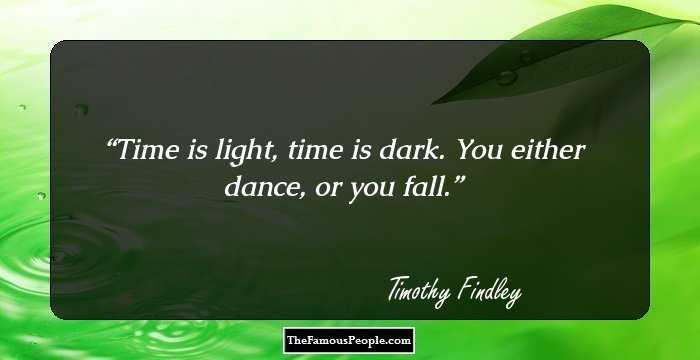 Time is light, time is dark. You either dance, or you fall. 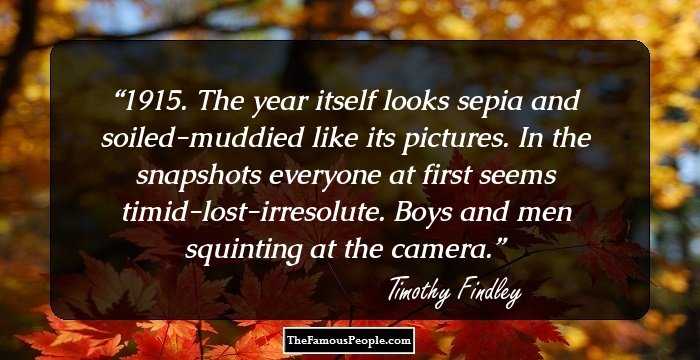 1915. The year itself looks sepia and soiled-muddied like its pictures. In the snapshots everyone at first seems timid-lost-irresolute. Boys and men squinting at the camera. 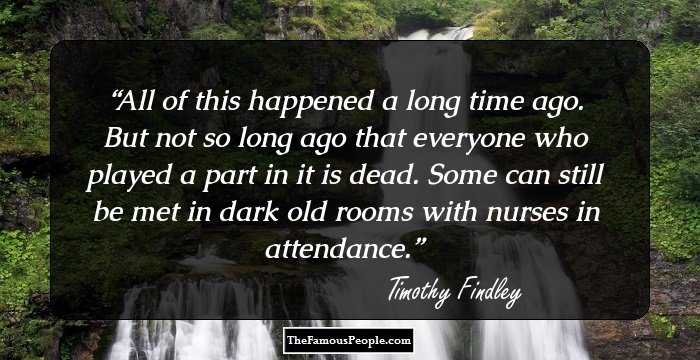 All of this happened a long time ago. But not so long ago that everyone who played a part in it is dead. Some can still be met in dark old rooms with nurses in attendance. 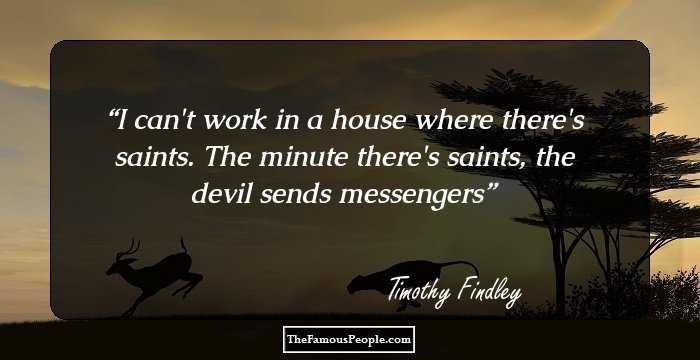 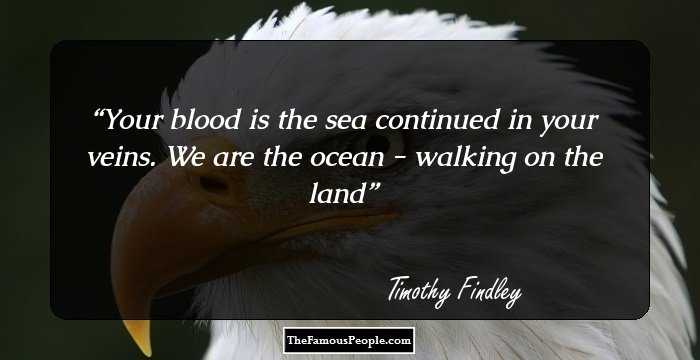 Your blood is the sea continued in your veins. We are the ocean - walking on the land 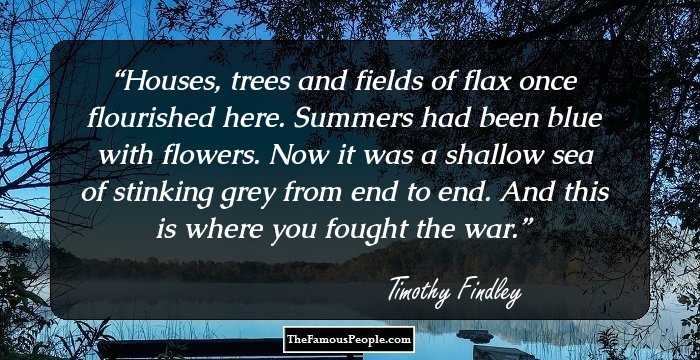 Houses, trees and fields of flax once flourished here. Summers had been blue with flowers. Now it was a shallow sea of stinking grey from end to end. And this is where you fought the war. 16 Inspiring Quotes By Theodor Reik, The Pioneer Of Lay Analysis 76 Great Quotes By Nelson Mandela, One Of The Most Inspiring Leaders Of The 20th Century