Famous As: British Actress Who is Known for Her Roles in Independent Films and Blockbusters
Born On: November 5, 1960
Born In: London, England
Age: 62 Years
Katherine Matilda Swinton, renowned as Tilda Swinton, is a well-known Scottish actress. She is distinguished for her roles in both blockbusters and independent arthouses films. For her supporting role in âMichael Clayton,â she bagged in an âAcademy Award.â For her performance in âYoung Adam,â she earned the âBAFTA Scotland Award.â She has also earned three âGolden Globe Awardâ nominations. She kicked-off her acting career with experimental films. Some of her noteworthy works include âThe Chronicles of Narnia series,â âThe Deep End,â âEdward II,â âI Am Love,â âOrlando,â âWe Need To Talk About Kevin,â âThe Last of England,â amongst various others. Following is a collection of popular quotes by Tilda Swinton which have been gathered from her dialogues, films, and interviews.Â
Listed In:
Film & Theater Personalities
Actresses 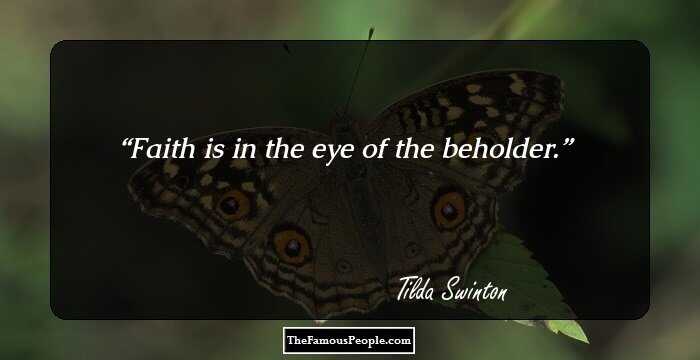 Faith is in the eye of the beholder. 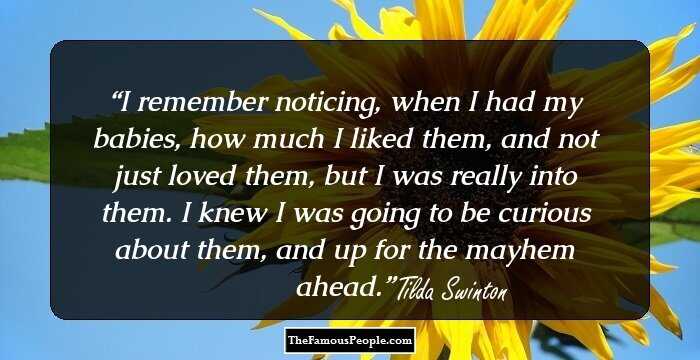 I remember noticing, when I had my babies, how much I liked them, and not just loved them, but I was really into them. I knew I was going to be curious about them, and up for the mayhem ahead. 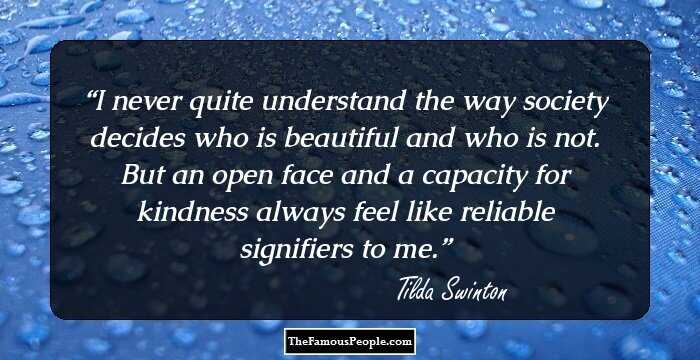 I never quite understand the way society decides who is beautiful and who is not. But an open face and a capacity for kindness always feel like reliable signifiers to me. 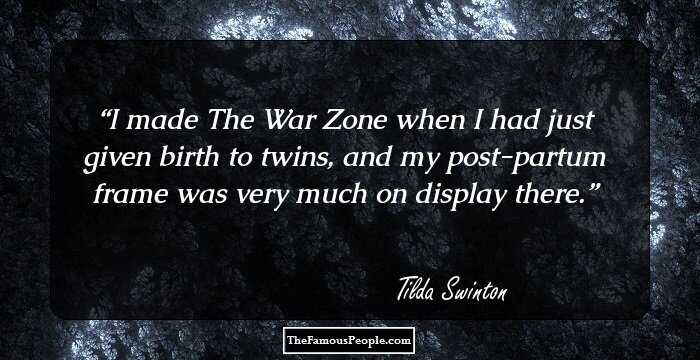 I made The War Zone when I had just given birth to twins, and my post-partum frame was very much on display there. 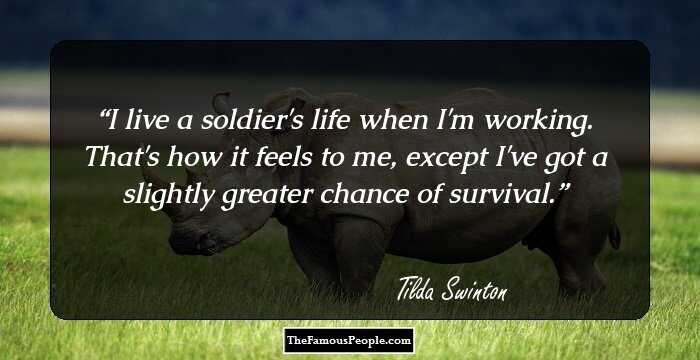 I live a soldier's life when I'm working. That's how it feels to me, except I've got a slightly greater chance of survival. 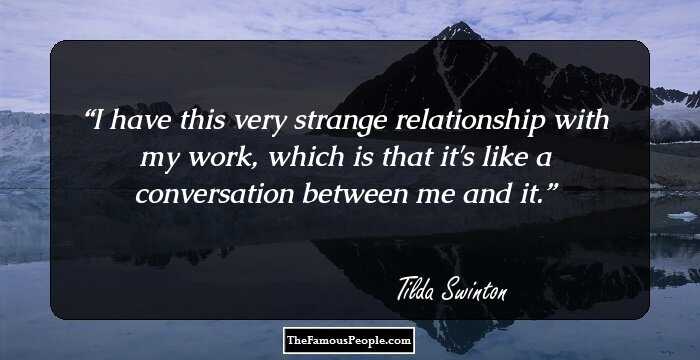 I have this very strange relationship with my work, which is that it's like a conversation between me and it. 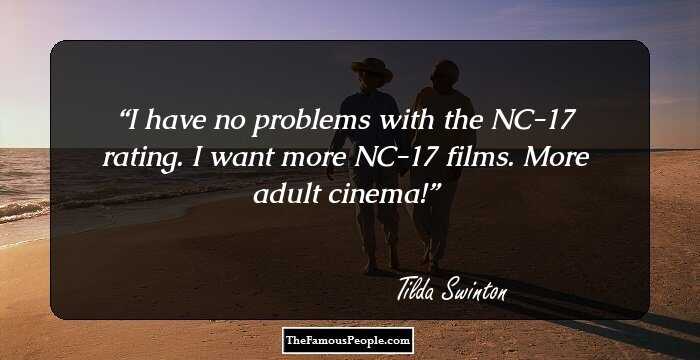 I have no problems with the NC-17 rating. I want more NC-17 films. More adult cinema! 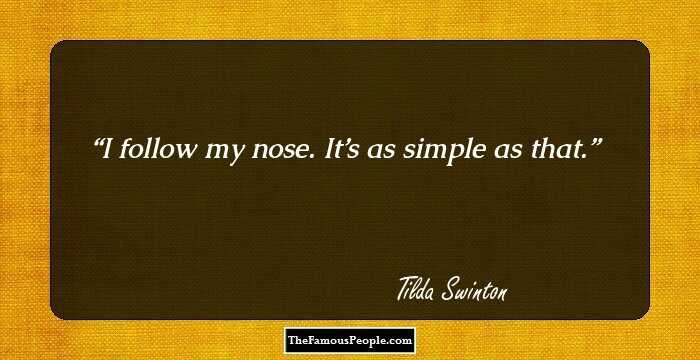 I follow my nose. Itâs as simple as that. 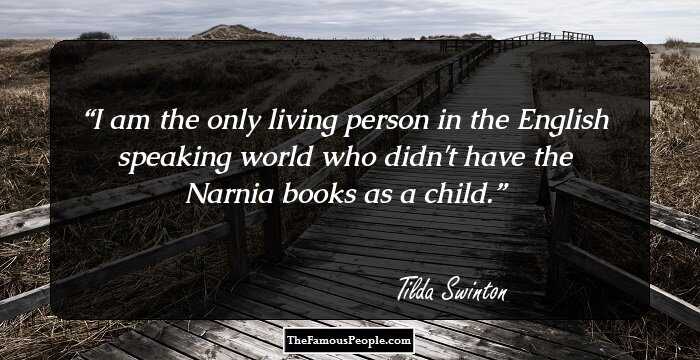 I am the only living person in the English speaking world who didn't have the Narnia books as a child. 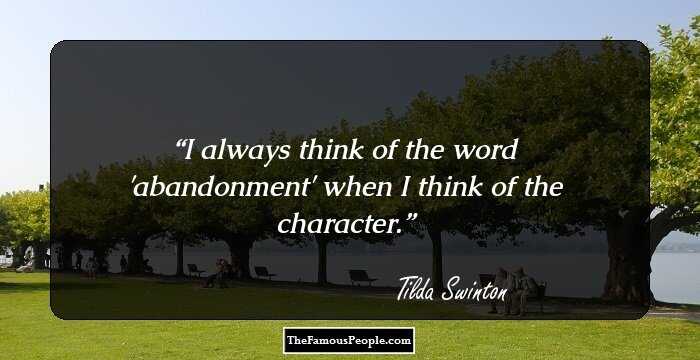 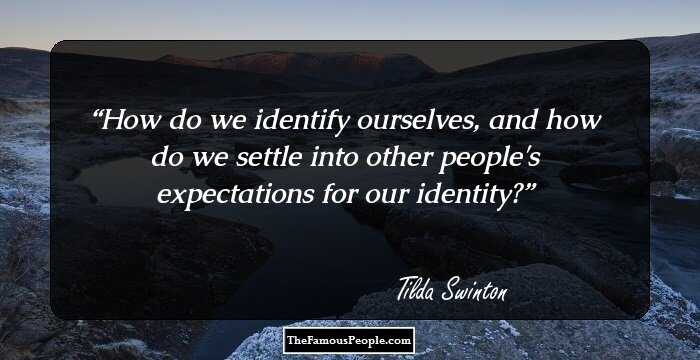 How do we identify ourselves, and how do we settle into other people's expectations for our identity? 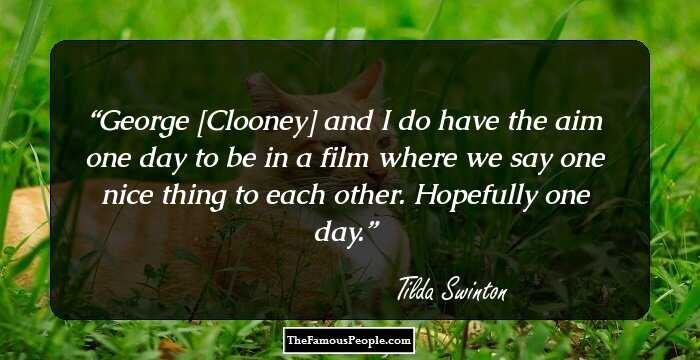 George [Clooney] and I do have the aim one day to be in a film where we say one nice thing to each other. Hopefully one day. 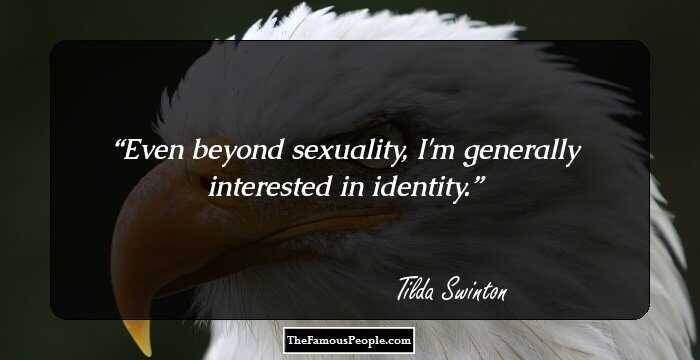 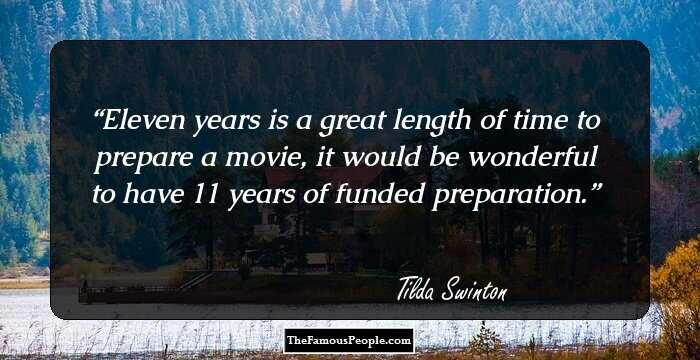 Eleven years is a great length of time to prepare a movie, it would be wonderful to have 11 years of funded preparation. 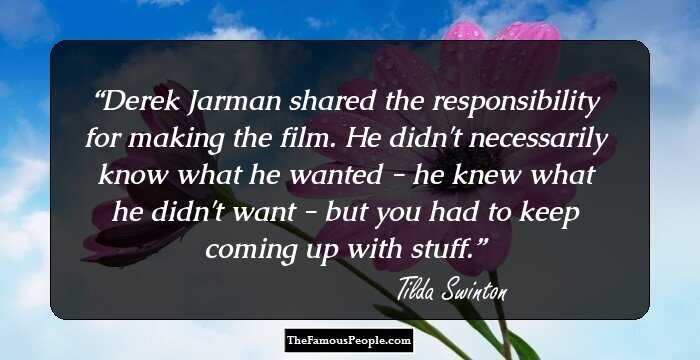 Derek Jarman shared the responsibility for making the film. He didn't necessarily know what he wanted - he knew what he didn't want - but you had to keep coming up with stuff. 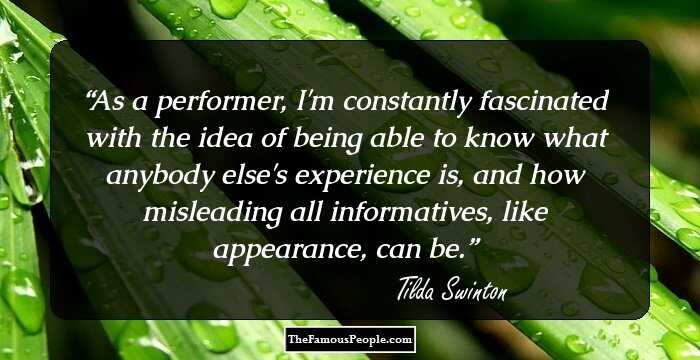 As a performer, I'm constantly fascinated with the idea of being able to know what anybody else's experience is, and how misleading all informatives, like appearance, can be. 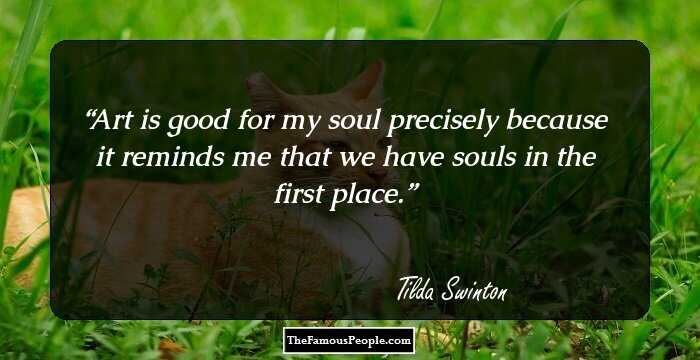 Art is good for my soul precisely because it reminds me that we have souls in the first place. 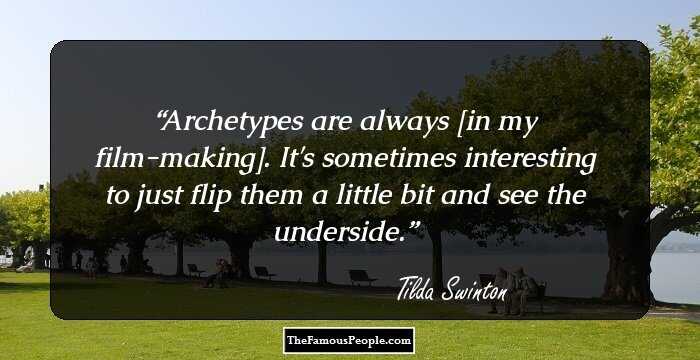 Archetypes are always [in my film-making]. It's sometimes interesting to just flip them a little bit and see the underside. 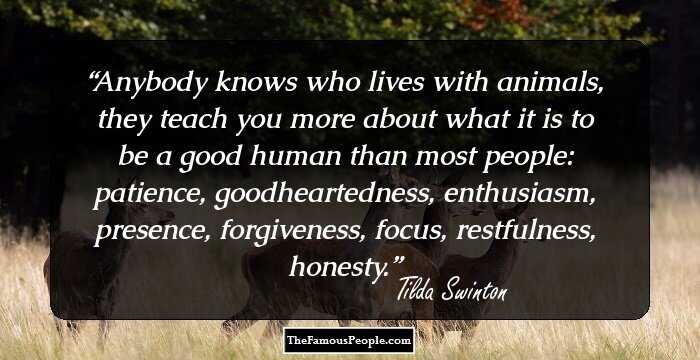 Anybody knows who lives with animals, they teach you more about what it is to be a good human than most people: patience, goodheartedness, enthusiasm, presence, forgiveness, focus, restfulness, honesty. 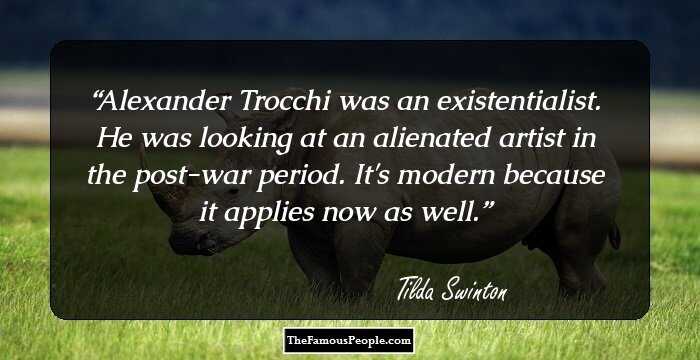 Alexander Trocchi was an existentialist. He was looking at an alienated artist in the post-war period. It's modern because it applies now as well. 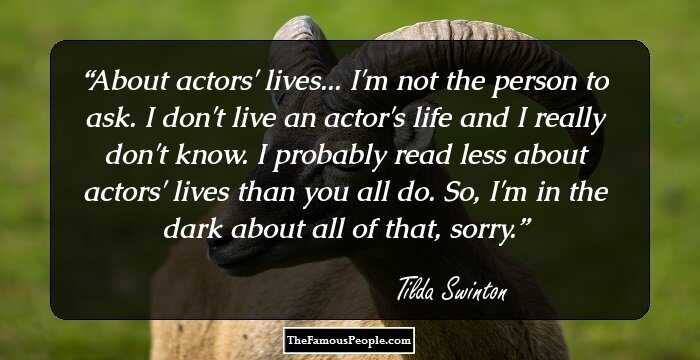 About actors' lives... I'm not the person to ask. I don't live an actor's life and I really don't know. I probably read less about actors' lives than you all do. So, I'm in the dark about all of that, sorry.

Daily absorption in the physical actualities of nature is life as I need it to be: it means I am connected to such large things - sky, sea, hill, the vagaries of weather, the undeniable needs of animals - that I can disappear as a subject of interest, I can exist without self-consciousness. The city is a challenge for me, however thrilling a few days prove, for its insatiable overstimulation and the rarity of quiet. The city makes people bigger than they need to be.

I mean, even in terms of the Marvel universe, this [Ancient One character] is going on a side street into a major piazza that Marvel hasn't even been to before, because it's all about creation and not so much about destruction and forestalling destruction, it's about your mind. 25 Great Quotes By Emma Thompson For The Wisest And Wittiest