Famous As: Former Associate Justice of the Supreme Court of the United States (1967 - 1991)
Born On: July 2, 1908
Died On: January 24, 1993
Born In: Baltimore, Maryland, United States
Died At Age: 84
Thurgood Marshall was a distinguished American lawyer who served as the Associate Judge of the Supreme Court Of the United States. He was also the first Afro-American justice besides being the courtâs 96th justice. Marshall also triumphantly argued many cases before the Supreme Court prior to his judicial service. In 1933, he graduated from Howard University School Of Law and started private legal practice in Baltimore. He later served as the executive director of âNAACP Legal Defense And Educational Fundâ which was also founded by him. Marshall was also appointed to the âUnited States Court of Appeals for the Second Circuitâ by President John F.Kennedy. Here is a collection of some notable thoughts, opinions and views by Thurgood Marshall which have been curated from his writings, cases, speeches, work and life. Go through the quotes and sayings by Thurgood Marshall that will give you a glimpse of his enlightened mind.
Listed In:
Lawyers & Judges 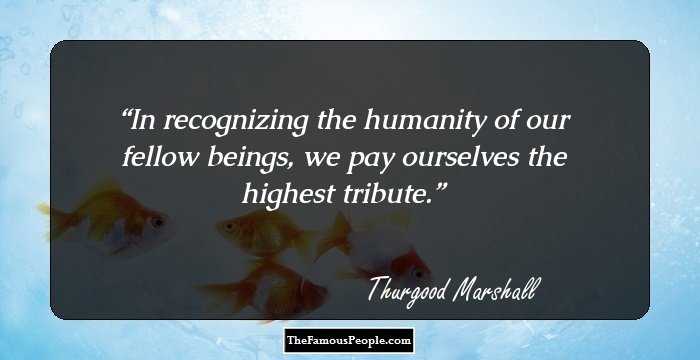 In recognizing the humanity of our fellow beings, we pay ourselves the highest tribute. 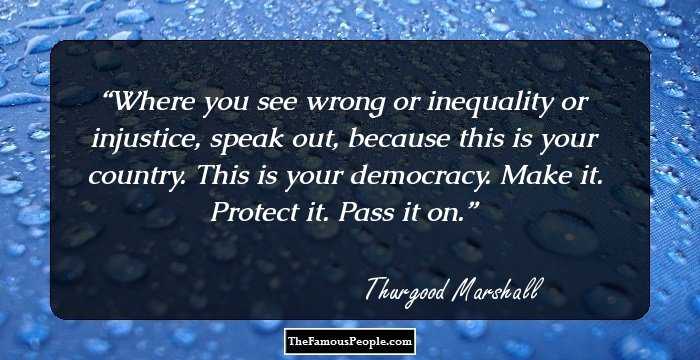 Where you see wrong or inequality or injustice, speak out, because this is your country. This is your democracy. Make it. Protect it. Pass it on. 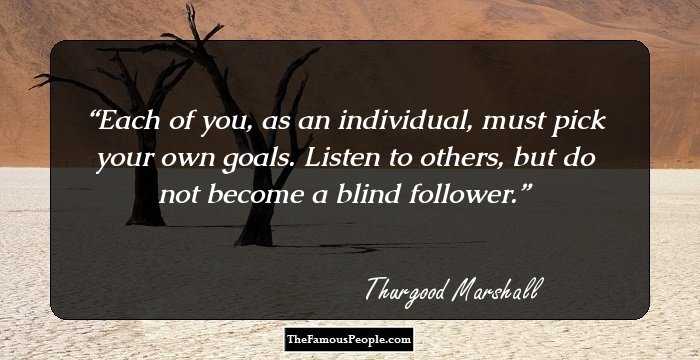 Each of you, as an individual, must pick your own goals. Listen to others, but do not become a blind follower. 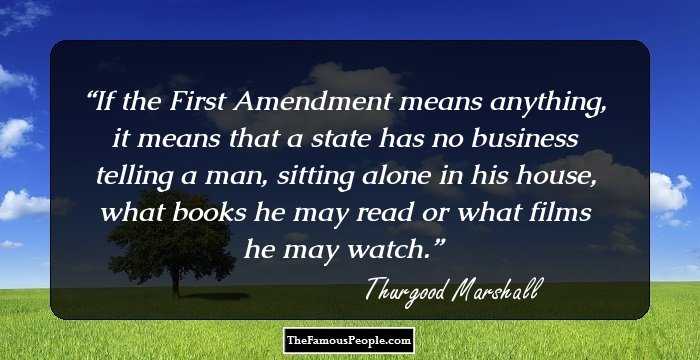 If the First Amendment means anything, it means that a state has no business telling a man, sitting alone in his house, what books he may read or what films he may watch.

None of us got where we are solely by pulling ourselves up by our bootstraps. We got here because somebody - a parent, a teacher, an Ivy League crony or a few nuns - bent down and helped us pick up our boots.

A child born to a Black mother in a state like Mississippi... has exactly the same rights as a white baby born to the wealthiest person in the United States. It's not true, but I challenge anyone to say it is not a goal worth working for. 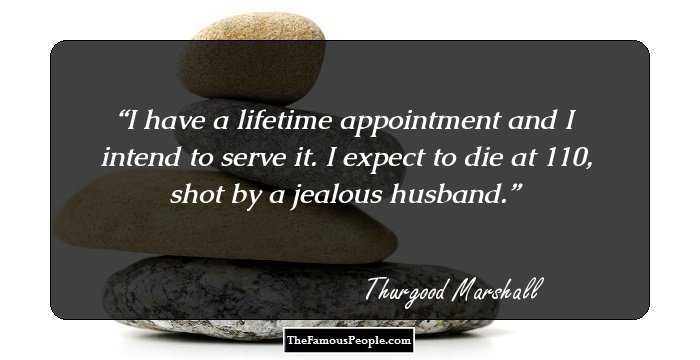 I have a lifetime appointment and I intend to serve it. I expect to die at 110, shot by a jealous husband. 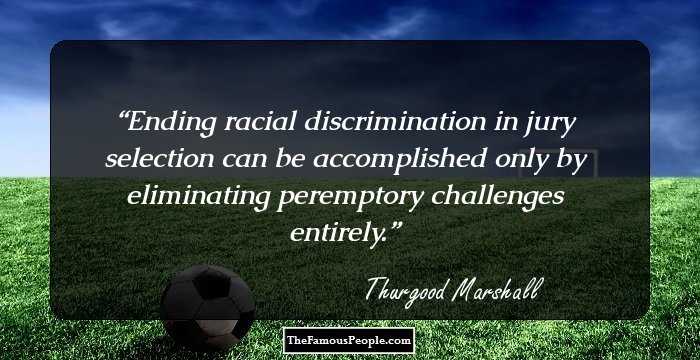 Ending racial discrimination in jury selection can be accomplished only by eliminating peremptory challenges entirely. 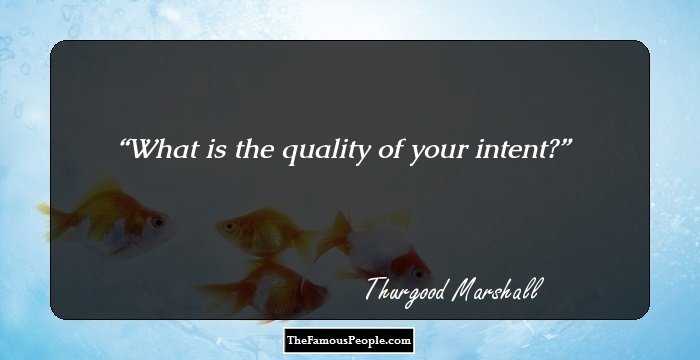 What is the quality of your intent? 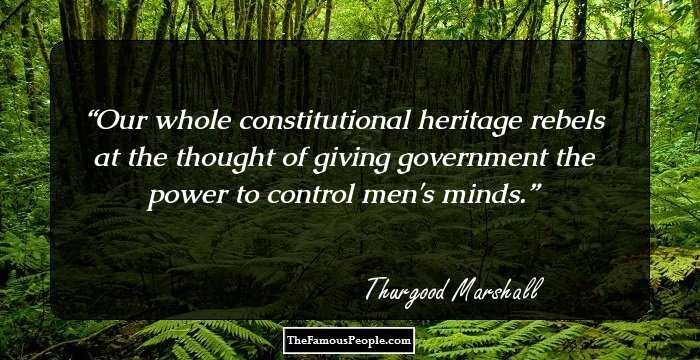 Our whole constitutional heritage rebels at the thought of giving government the power to control men's minds.

We deal here with the right of all of our children, whatever their race, to an equal start in life and to an equal opportunity to reach their full potential as citizens. Those children who have been denied that right in the past deserve better than to see fences thrown up to deny them that right in the future.

I never worked hard until I got to the Howard Law School and met Charlie Houston... I saw this man's dedication, his vision, his willingness to sacrifice, and I told myself, 'You either shape up or ship out.' When you are being challenged by a great human being, you know that you can't ship out.

You Never I
Thurgood Marshall 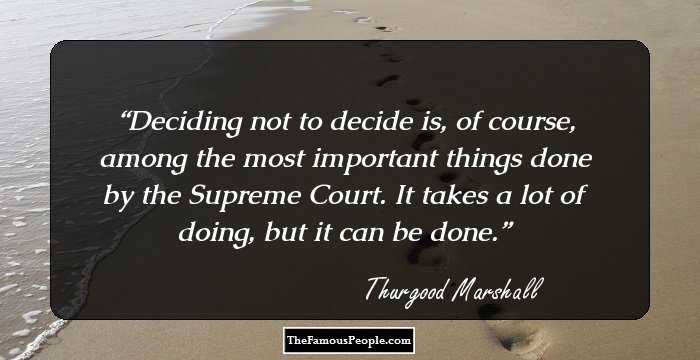 Deciding not to decide is, of course, among the most important things done by the Supreme Court. It takes a lot of doing, but it can be done. 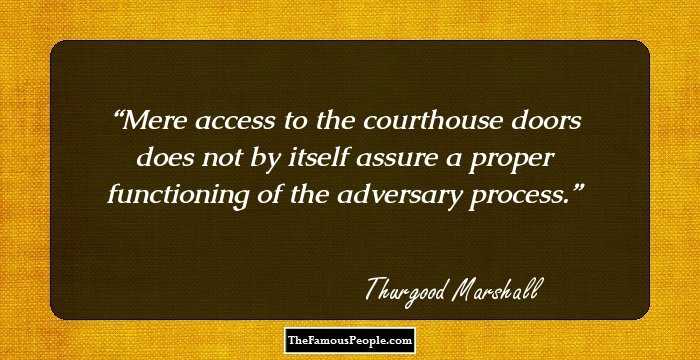 Mere access to the courthouse doors does not by itself assure a proper functioning of the adversary process. 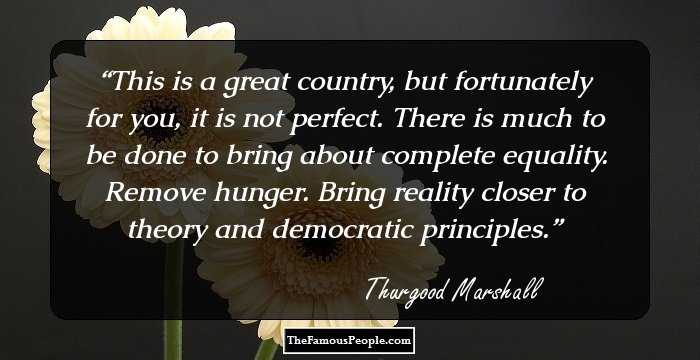 This is a great country, but fortunately for you, it is not perfect. There is much to be done to bring about complete equality. Remove hunger. Bring reality closer to theory and democratic principles.

It is important that the strongest pressures against the continuation of segregation, North or South, be continually and constantly manifested. Probably, as much as anything else, this is the key in the elimination of discrimination in the United States. 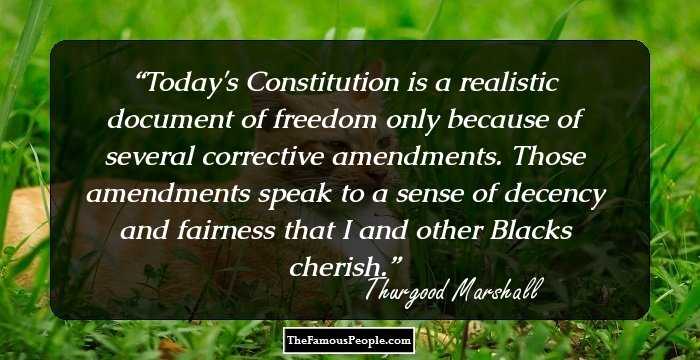 Today's Constitution is a realistic document of freedom only because of several corrective amendments. Those amendments speak to a sense of decency and fairness that I and other Blacks cherish. 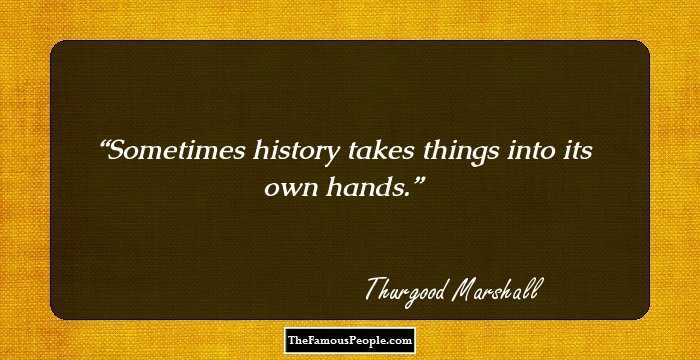 Sometimes history takes things into its own hands. 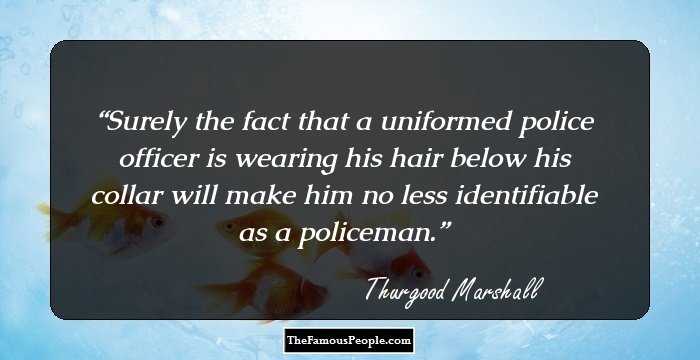 Surely the fact that a uniformed police officer is wearing his hair below his collar will make him no less identifiable as a policeman. 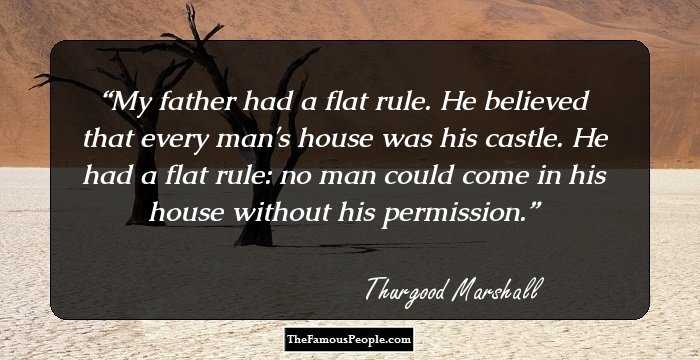 My father had a flat rule. He believed that every man's house was his castle. He had a flat rule: no man could come in his house without his permission.

When you hear a lot of stories about Africa, and you get to a place like Kenya and other countries like that, where they think the same way we do, I was happy to find that the Schedule of Rights that I drew for the Kenyan Government was working very well. 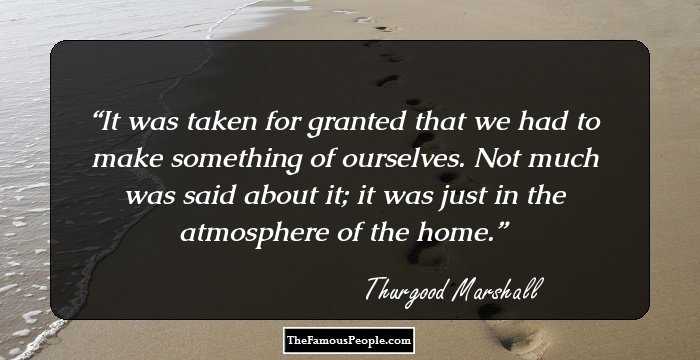 It was taken for granted that we had to make something of ourselves. Not much was said about it; it was just in the atmosphere of the home. 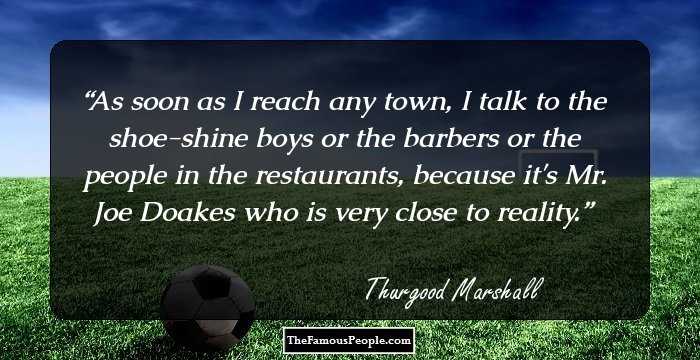 As soon as I reach any town, I talk to the shoe-shine boys or the barbers or the people in the restaurants, because it's Mr. Joe Doakes who is very close to reality. 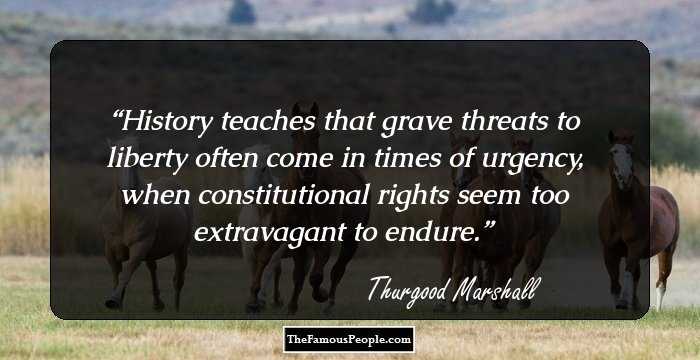 History teaches that grave threats to liberty often come in times of urgency, when constitutional rights seem too extravagant to endure. 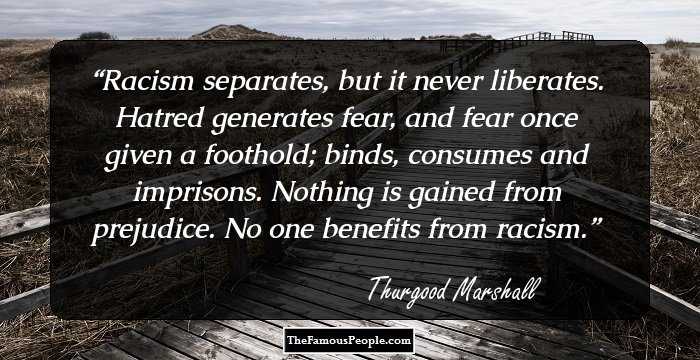 Racism separates, but it never liberates. Hatred generates fear, and fear once given a foothold; binds, consumes and imprisons. Nothing is gained from prejudice. No one benefits from racism. 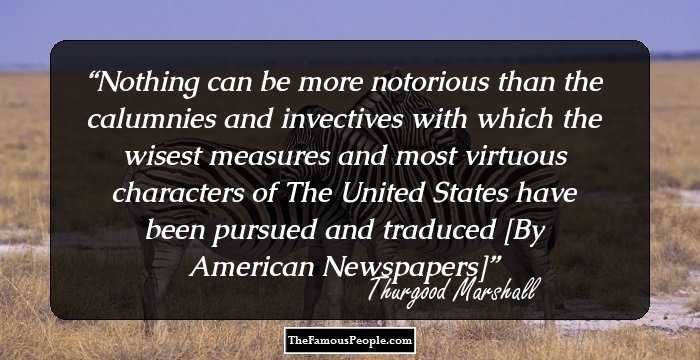 79 Great Quotes By Antonin Scalia That Prove His Legal Prowess