Famous As: Pop Icon & One of the Best-Selling Musicians of All Time
Born On: December 13, 1989
Born In: West Reading, Pennsylvania, United States
Age: 32 Years

Taylor Swift is a celebrated American actress, singer, record producer, and songwriter. She is best-known for her narrative songwriting that reflects her personal life, for which she has been critically appraised. Her breakthrough came with âFearless,â the second studio album by the singer for which she bagged in four âGrammy Awards.â She produced the pop-crossover hit singles âYou Belong With Meâ and âLove Story.â She has earned an âEmmy Award,â ten âGrammy Awards,â and seven âGuinness World Recordsâ for her works. She is one of the worldâs top-selling music artists of all time with the sales of 150 million singles across the globe and 50 million albums. We bring to you a compilation of famous sayings by Taylor Swift on mind, criticism, life, happiness, love, lover, people, songs, relationship, memories, self-believe, world, wish, hurt, books, hate, power, etc. 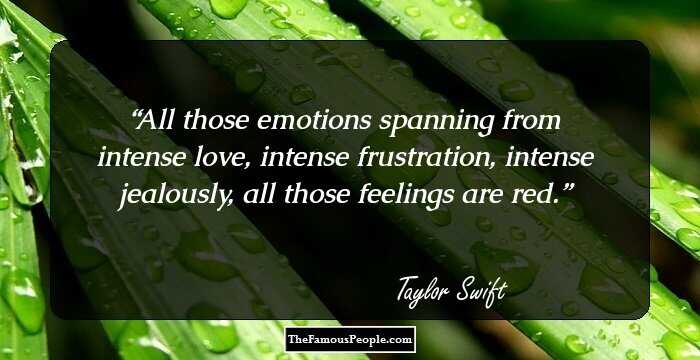 All those emotions spanning from intense love, intense frustration, intense jealously, all those feelings are red. 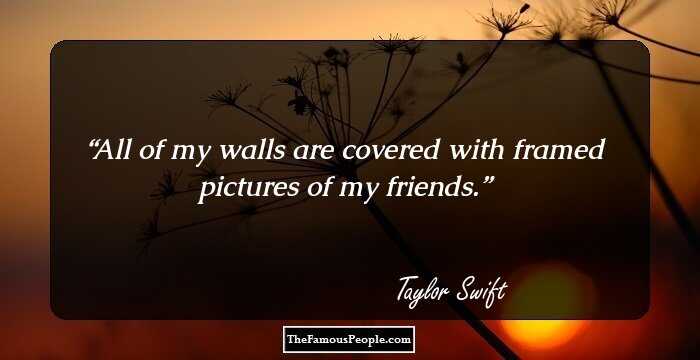 All of my walls are covered with framed pictures of my friends. 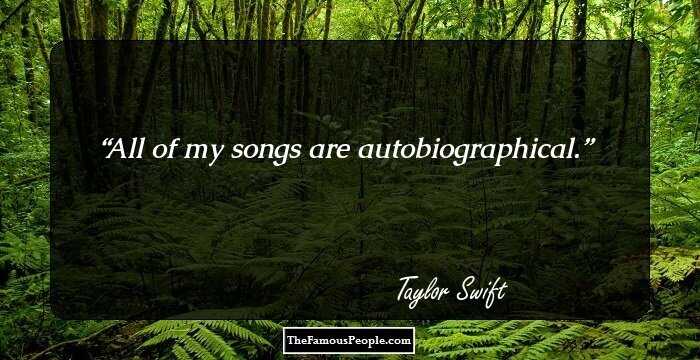 All of my songs are autobiographical. 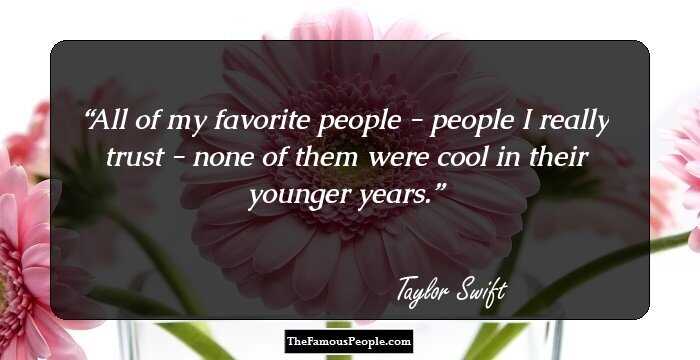 All of my favorite people - people I really trust - none of them were cool in their younger years. 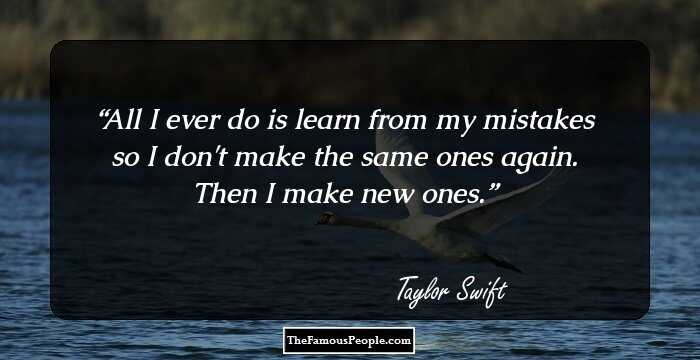 All I ever do is learn from my mistakes so I don't make the same ones again. Then I make new ones. 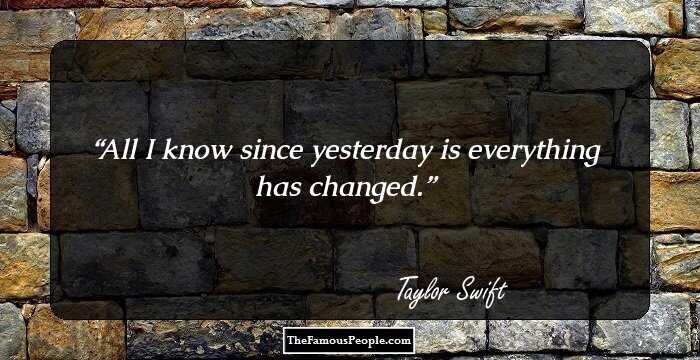 All I know since yesterday is everything has changed. 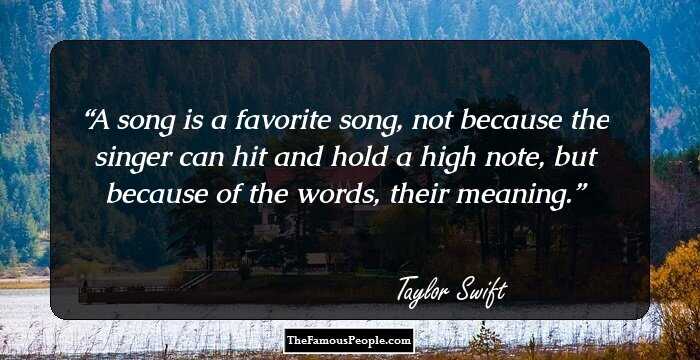 A song is a favorite song, not because the singer can hit and hold a high note, but because of the words, their meaning. 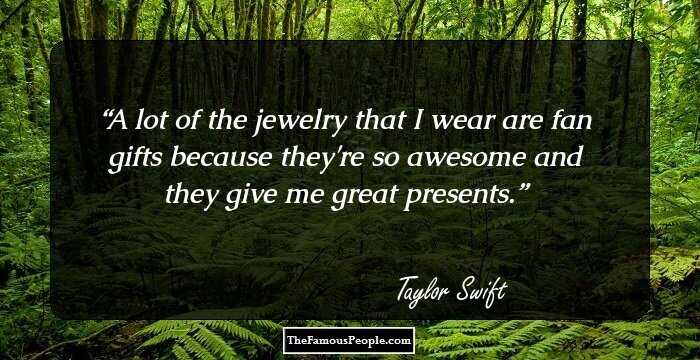 A lot of the jewelry that I wear are fan gifts because they're so awesome and they give me great presents. 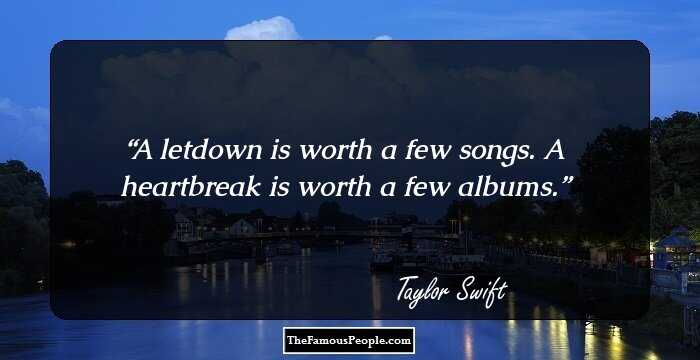 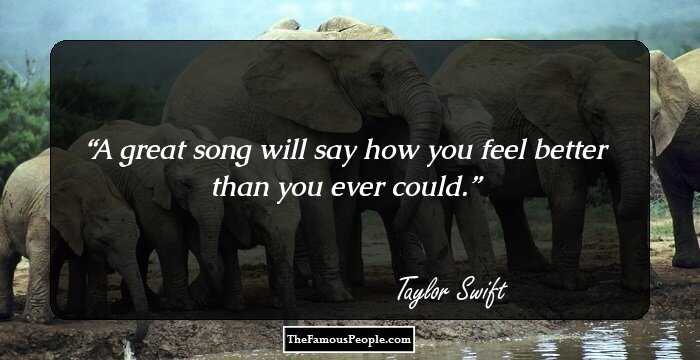 A great song will say how you feel better than you ever could. 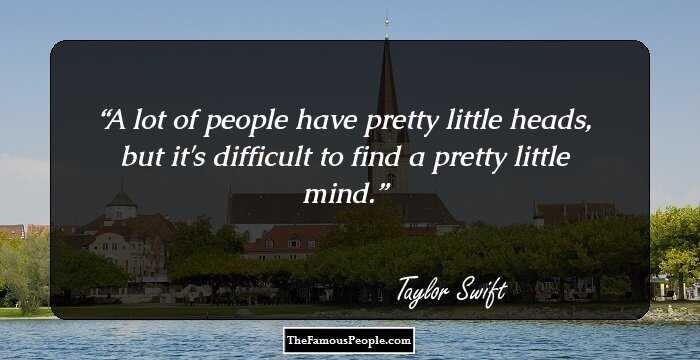 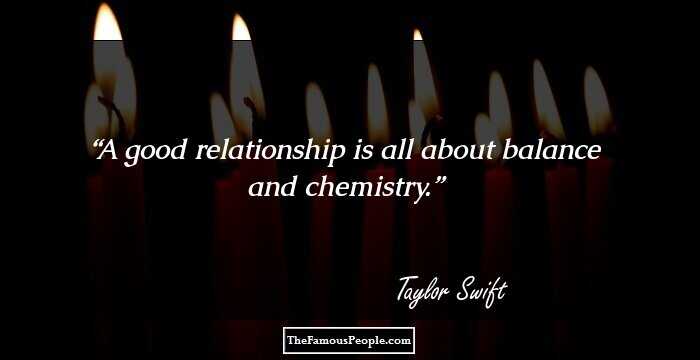 A good relationship is all about balance and chemistry. 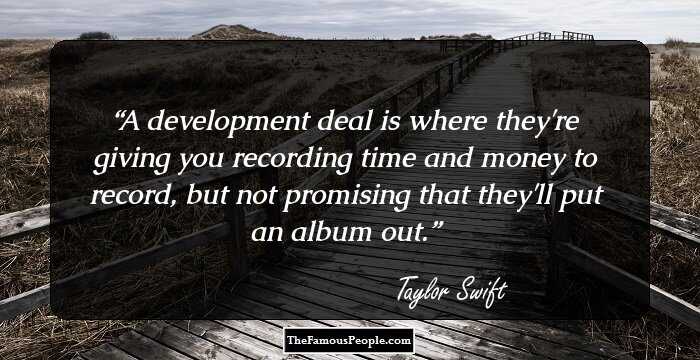 A development deal is where they're giving you recording time and money to record, but not promising that they'll put an album out. 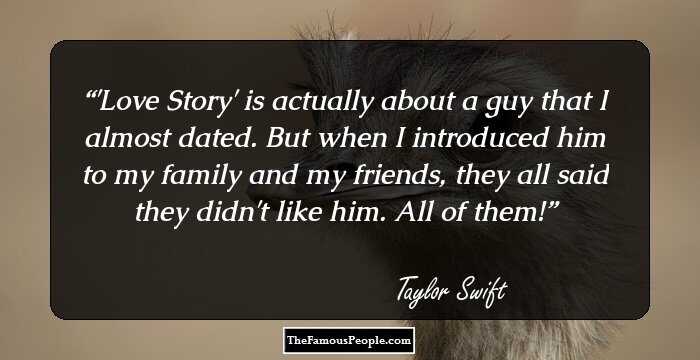 'Love Story' is actually about a guy that I almost dated. But when I introduced him to my family and my friends, they all said they didn't like him. All of them! 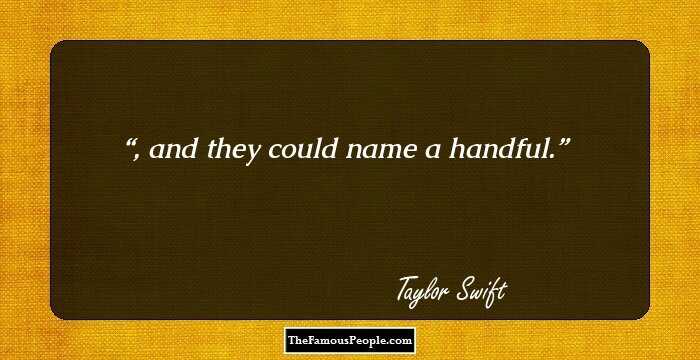 , and they could name a handful. 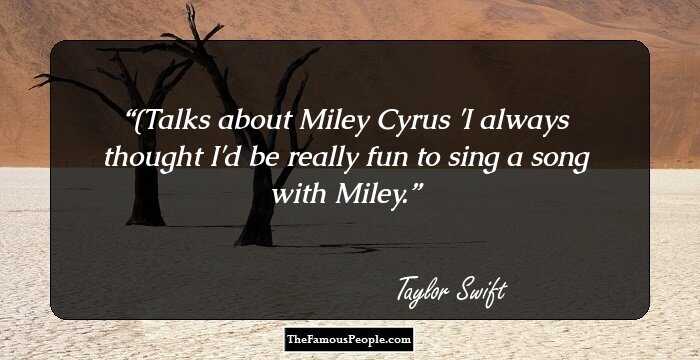 (Talks about Miley Cyrus 'I always thought I'd be really fun to sing a song with Miley. 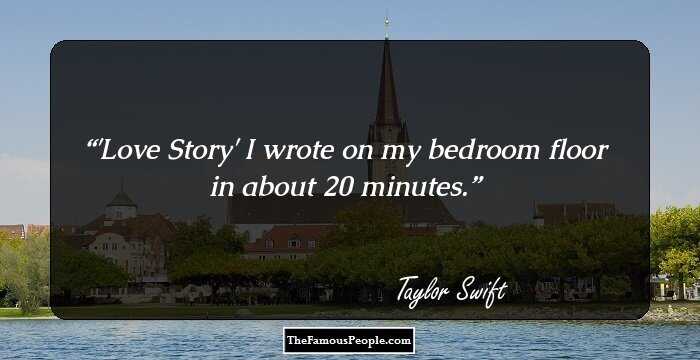 'Love Story' I wrote on my bedroom floor in about 20 minutes.

'Mean' is a song I wrote about somebody who wrote things that were so mean so many times that it would ruin my day. Then it would ruin the next day. And it would level me so many times, I just felt like I was being hit in the face every time this person would take to their computer.

'The Story of Us' is about running into someone I had been in a relationship with at an awards show, and we were seated a few seats away from each other. I just wanted to say to him, 'Is this killing you? Because it's killing me.' But I didn't. Because I couldn't. Because we both had these silent shields up.

(Talks about a school production) 'There was one solo; but it was a guy. It was this character called 'Freddy Fast Talk' and it was the bad guy. I didn't care, I was like I will dress up like a guy, I want to sing that song. And so I remembered we drew on eyebrows, and I had like a moustache,and we put all my hair up in this hat. So I dressed like a guy and sang the solo.

(Talks about her childhood) I grew up on a Christmas tree farm in Reading, PA. It was the most magical fun childhood. We had grape arbours and we would make jam with my mom. My dad would go to work and he'd come home. He'd clean out stalls and fix split-row fences.

A development deal is an in-between record deal. It's like, a guy saying that he wants to date you but not be your boyfriend. You know, they don't wanna sign you to an actual record deal or put an album out on you. They wanna watch your progress for a year.

Actually, I think you have to know that whatever advice you give, they may not take it. The priority should be on keeping the friendship rather than giving the best advice. Your best advice is usually, 'Walk away from him! Tell him you never want to see him again!' But if you are dealing with someone still in love, nothing you say can change their feelings. All you can do is be there for them and pick them up every time they get hurt. Until, that is, they are ready to move on for themselves.

A lot of people ask me, 'How did you have the courage to walk up to record labels when you were 12 or 13 and jump right into the music industry?' It's because I knew I could never feel the kind of rejection that I felt in middle school. Because in the music industry, if they're gonna say no to you, at least they're gonna be polite about it.