Famous As: Screenwriter, Film director, Actor
Born On: December 16, 1961
Born In: Pittsburgh, Pennsylvania, United States
Age: 61 Years
Shane Black is an American actor, director, and filmmaker. He is best known for playing âRick Hawkinsâ in the 1987 science fiction film âPredator.â He started as a screenwriter with âWarner Bros.,â who offered him to write âLethal Weaponâ for a deal of $2 50,000. Since then, he has written many successful films, such as âThe Monster Squad,â Lethal Weapon 2,â âLast Action Hero,â and âThe Long Kiss Goodnight.â As a director, he made his feature film debut in âKiss Kiss Bang Bang,â in 2005. He also wrote and directed some brilliant films, including âIron Man 3,â âThe Nice Guys,â âThe Predator.â As an actor, he was seen in films, such as âRoboCop 3,â âAs Good As It Gets,â and âSwing State.â We have curated Shane Blackâs quotes from his films, scripts, interviews, etc. Here are some ofÂ Shane Black quotes on audience, character, thinking, writing, starting out, kids, etc.
Listed In:
Actors
Writers
Film & Theater Personalities 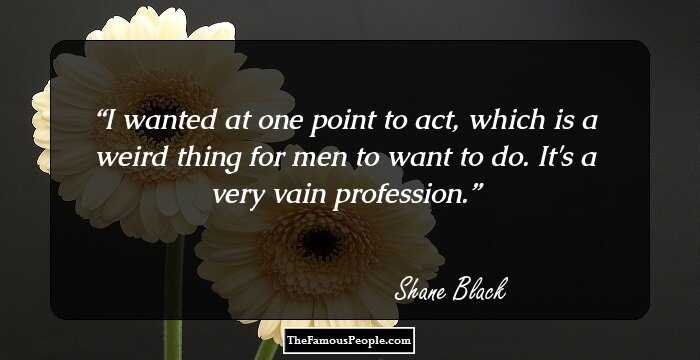 I wanted at one point to act, which is a weird thing for men to want to do. It's a very vain profession. 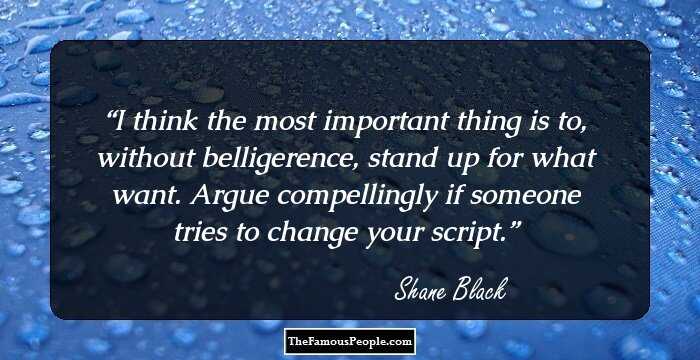 I think the most important thing is to, without belligerence, stand up for what want. Argue compellingly if someone tries to change your script. 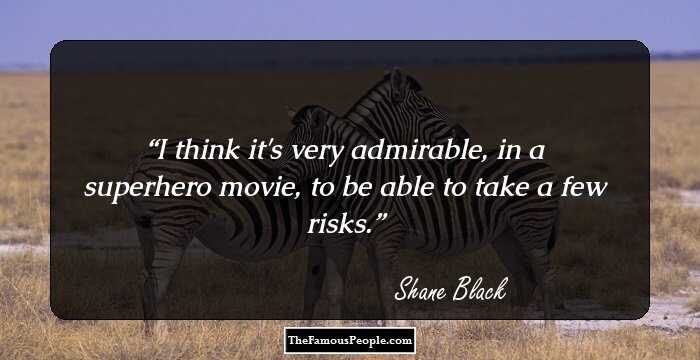 I think it's very admirable, in a superhero movie, to be able to take a few risks. 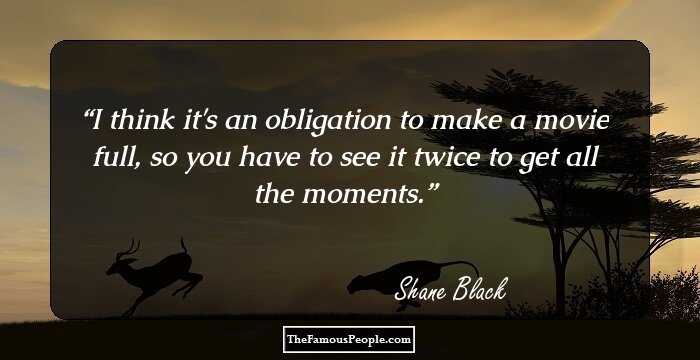 I think it's an obligation to make a movie full, so you have to see it twice to get all the moments. 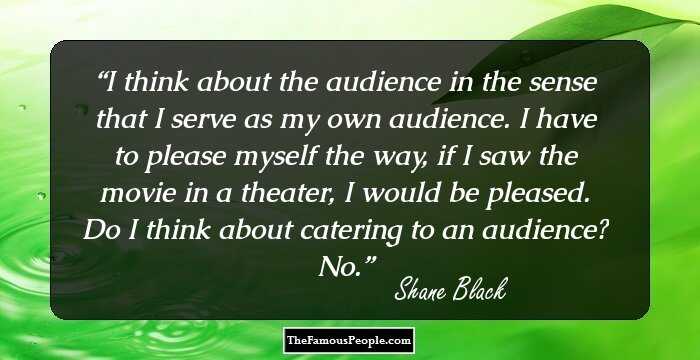 I think about the audience in the sense that I serve as my own audience. I have to please myself the way, if I saw the movie in a theater, I would be pleased. Do I think about catering to an audience? No. 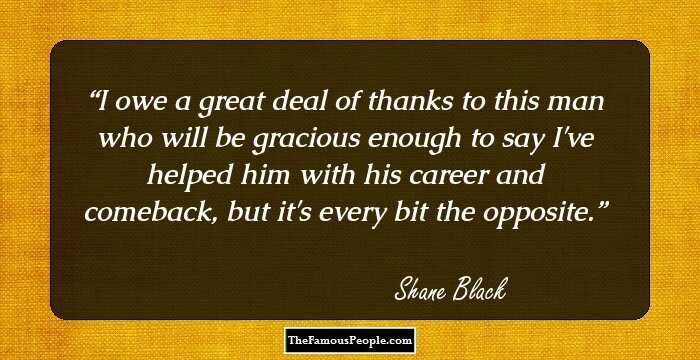 I owe a great deal of thanks to this man who will be gracious enough to say I've helped him with his career and comeback, but it's every bit the opposite. 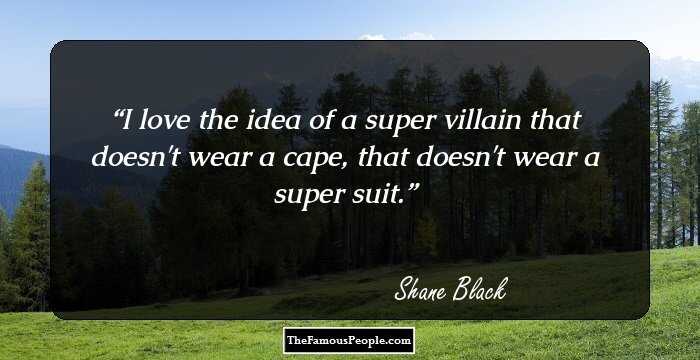 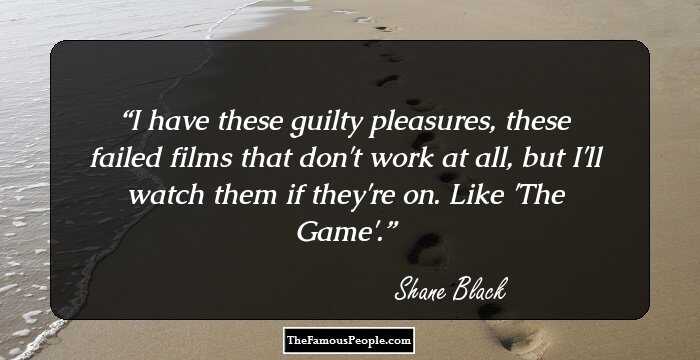 I have these guilty pleasures, these failed films that don't work at all, but I'll watch them if they're on. Like 'The Game'. 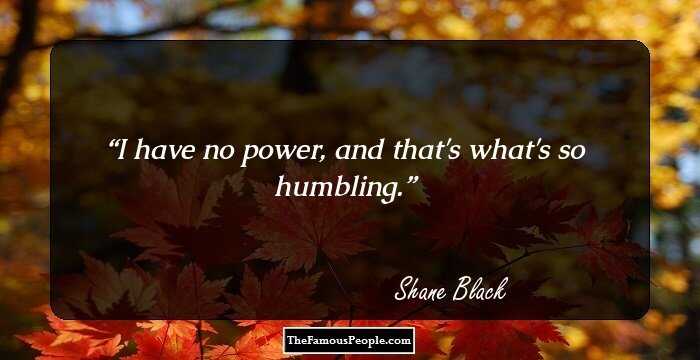 I have no power, and that's what's so humbling. 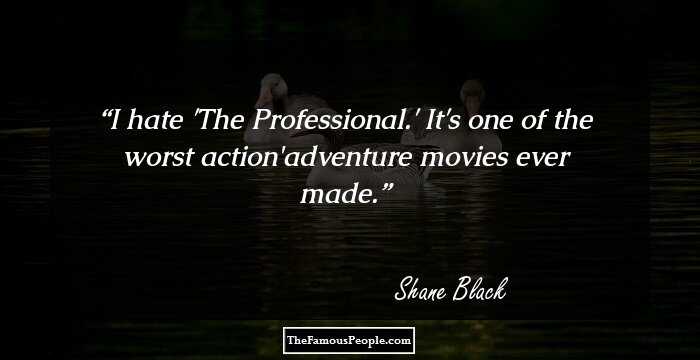 I hate 'The Professional.' It's one of the worst action/adventure movies ever made. 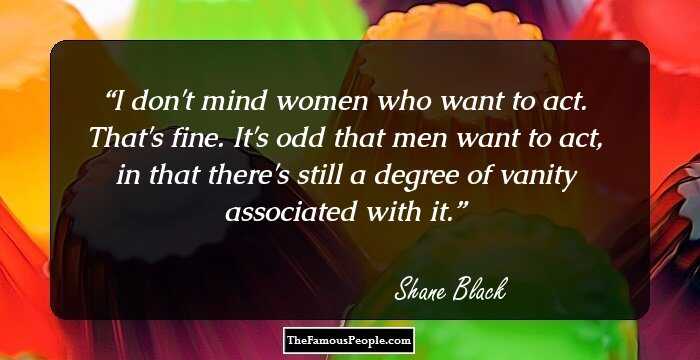 I don't mind women who want to act. That's fine. It's odd that men want to act, in that there's still a degree of vanity associated with it. 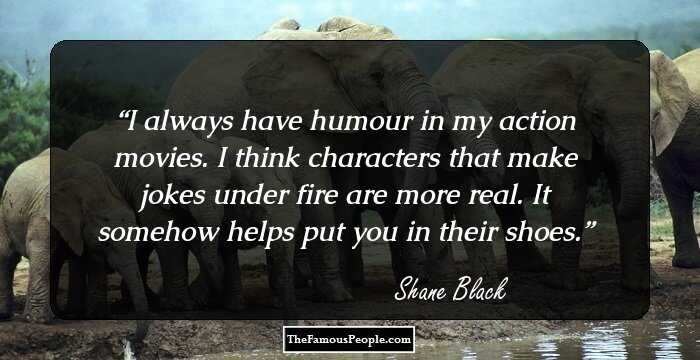 I always have humour in my action movies. I think characters that make jokes under fire are more real. It somehow helps put you in their shoes. 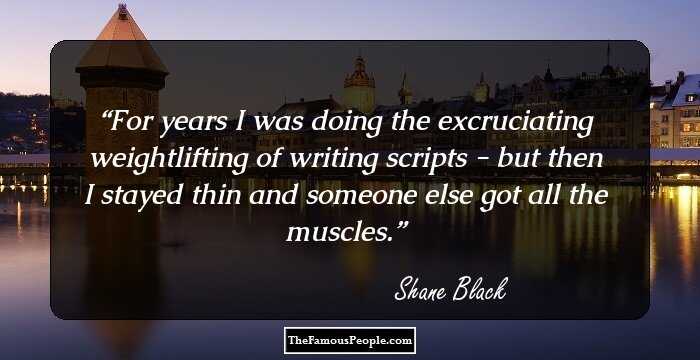 For years I was doing the excruciating weightlifting of writing scripts - but then I stayed thin and someone else got all the muscles. 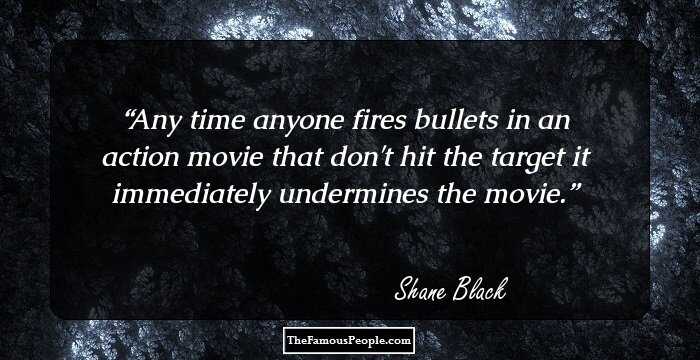 Any time anyone fires bullets in an action movie that don't hit the target it immediately undermines the movie. 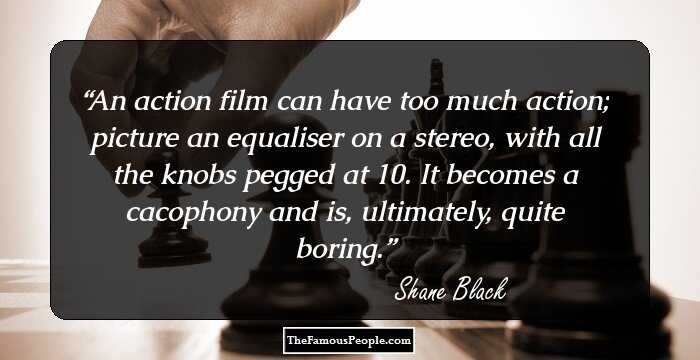 An action film can have too much action; picture an equaliser on a stereo, with all the knobs pegged at 10. It becomes a cacophony and is, ultimately, quite boring.

An action movie should, like any other, follow the narrative traditions of literature. That means there should be subtlety, a slow build and a gradual bringing together of all the separate threads of the plot. To see all of it coming together slowly is very rewarding for the audience.

Directing comes closer than anything Iâve found yet to providing me with a good reason to get up in the morning that goes beyond just getting some money. Because all the money does is buy the bed. Getting out of it is the problem.

Going to UCLA, as far as I'm concerned, afforded me two things. One was the advantage of meeting friends and getting to know a group of guys I hung out with, was chummy with. All of us eventually had success with film. Making films, cutting our own little movies together, 3 in the morning going out and shooting stuff, finding gels that people had thrown away, making our own lights. It was like a frat house for film geeks, the Pad O' Guys. That's what being at UCLA afforded me.

Here's what I didn't know when I was starting out that I now knowâ¦I thought when you were starting out it was really hard to write because you hadn't broken in yet, you hadn't really hit your stride yet. What I found out paradoxically is that the next script you write doesn't get easier because you wrote one beforeâ¦each one gets harder by a factor of 10.

I do think the challenge, in a way for me, is to write a narrative film and when you finish watching it you feel like it's a collage. You tell the narrative, you tell the story, but you feel like you've created this tapestry. But it also has a shape, a story. So I think there's a middle ground that I try to strike... away from where everyone else seems ready to go, which is, setup, payoff. You know, He's afraid of water, oh, and at the end he's swimming in water - oh, my God. I hate that stuff.

I felt that in a way, I hated the writing process so much. It's excruciating, as I'm sure you know, and so lonely being in the solitary prison of my office. A lot of brain-wracking. It just felt like it was so much hard work, and I would send it away. I felt as though I was doing all of this heavy lifting, this weightlifting, every day, all day. It was excruciating. And I stayed skinny, and someone else got all the muscles. I was eating all my vegetables, but then I wouldn't get dessert. To me, directing is the dessert.

I had my group of friends, and they stayed my group of friends, they were good about that. We all started to succeed at the same time, so that sort of took the curse off it. I didn't have a bunch of people scowling at me and being potentially jealous. I just had good friends who I was able to help, and they helped me. Yet it eventually came to feel debilitating.

I have a shoebox: for ideas, fragments, snatches of conversation I hear. I scrawl it down, throw the scraps in the box. Every time I start a new script I start picking through the pieces. Suddenly you get five pieces together and think: this is almost the first Act of a movie, if I flesh it out a bit.

I think a lot of people - by the time I came back with a script I liked, which took me many years, they'd forgotten who I was. Doors all the time are slamming, you meet friends that you've had for years, you'd go to the studio, and they'd say things to indicate clearly that they hadn't read it, or that they'd had their assistant sort of skim it. They wouldn't buy it. They wouldn't make it.

I thought of Joel Silver. He never changes. He's sort of the unmoving, unchanging rock of Gibraltar in the otherwise-shifting world of Hollywood. He's the same as he always was. He looks the same, talks the same, has the same enthusiasm. 62 Jeremy Piven Quotes For Your Daily Dose Of Laughter