Famous As: Best Known for His Roles in the Films: 'Mystic River' and 'Milk'
Born On: August 17, 1960
Born In: Santa Monica, California, United States
Age: 62 Years
Sean Penn is a popular American filmmaker, political activist, and actor. He won âAcademy Awardâ for his phenomenal performances in âMilkâ and âMystic River.â Some of his well-known works include âState of Grace,â âI Am Sam,â âAt Close Range,â âDead Man Walking,â âSheâs So Lovely,â and many more. âThe Indian Runnerâ marked his directorial debut. He is also a social and political activist and has expressed vocally his views and opinions on various social and political issues. Let us take a look at quotations by Sean Penn.
Listed In:
Actors
Film & Theater Personalities 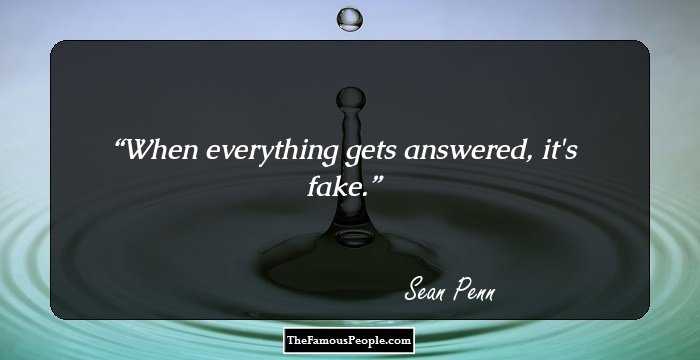 When everything gets answered, it's fake. 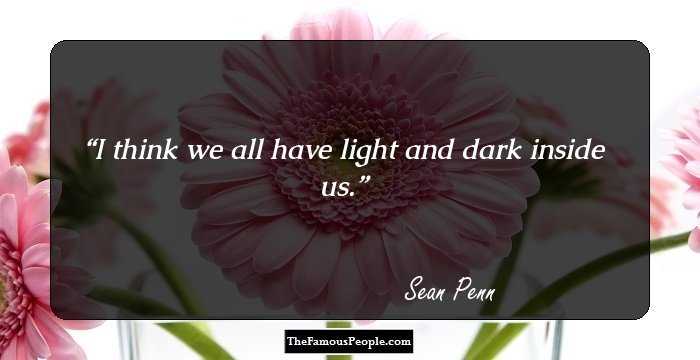 I think we all have light and dark inside us. 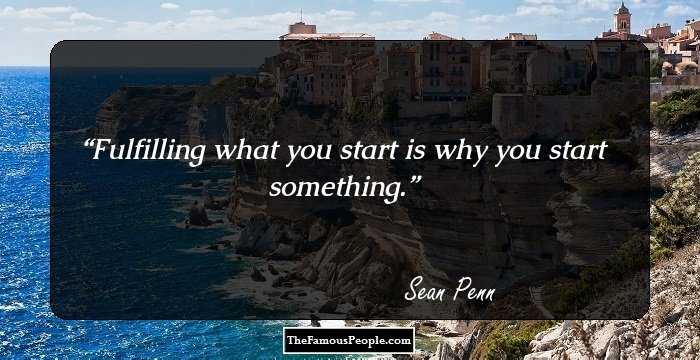 Fulfilling what you start is why you start something. 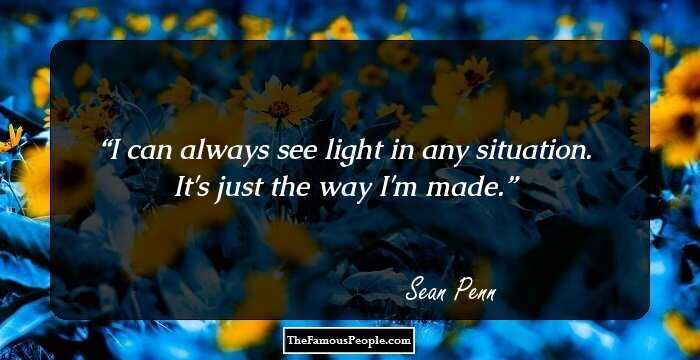 I can always see light in any situation. It's just the way I'm made.

I don't think you can get away with putting your talents in a toilet bowl and not having them flushed away. Forever. There is a level of murder of one's soul and of the culture that they're supposed to be feeding vitamins to. 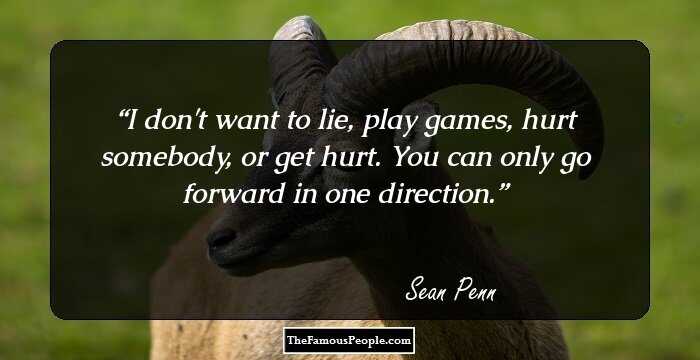 I don't want to lie, play games, hurt somebody, or get hurt. You can only go forward in one direction. 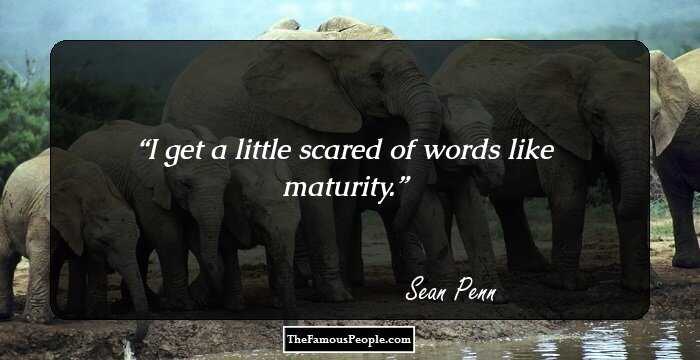 I get a little scared of words like maturity. 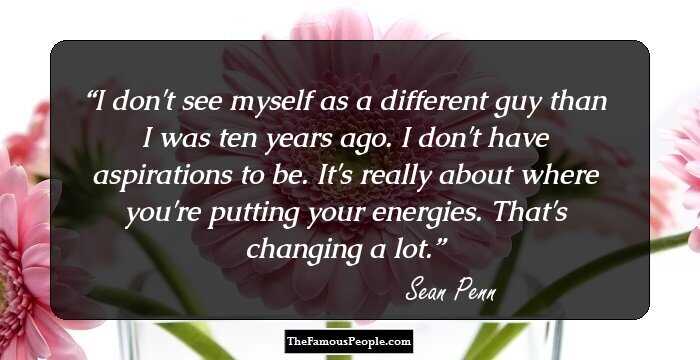 I don't see myself as a different guy than I was ten years ago. I don't have aspirations to be. It's really about where you're putting your energies. That's changing a lot. 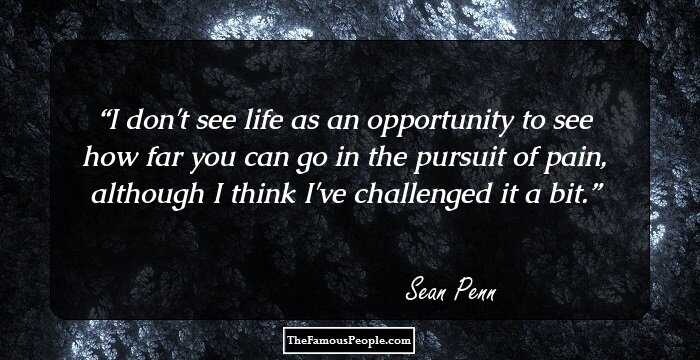 I don't see life as an opportunity to see how far you can go in the pursuit of pain, although I think I've challenged it a bit. 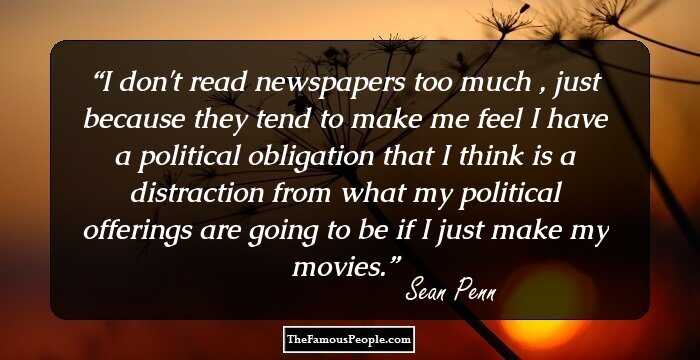 I don't read newspapers too much , just because they tend to make me feel I have a political obligation that I think is a distraction from what my political offerings are going to be if I just make my movies. 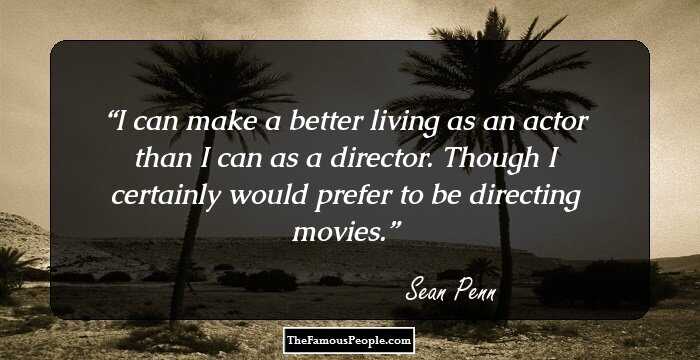 I can make a better living as an actor than I can as a director. Though I certainly would prefer to be directing movies. 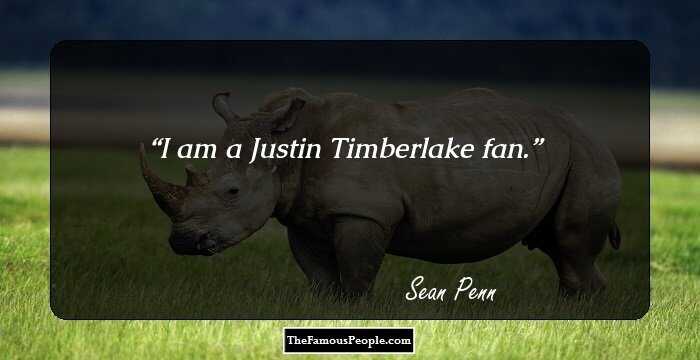 I am a Justin Timberlake fan. 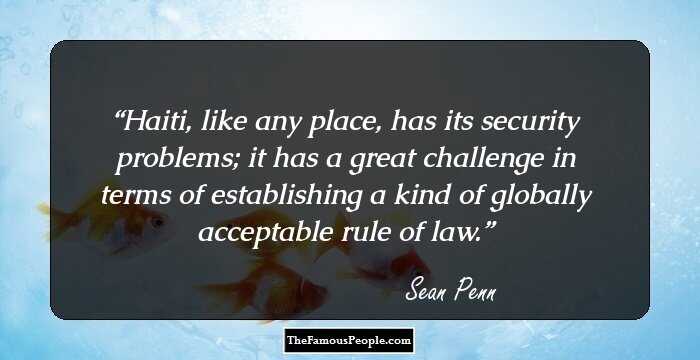 Haiti, like any place, has its security problems; it has a great challenge in terms of establishing a kind of globally acceptable rule of law. 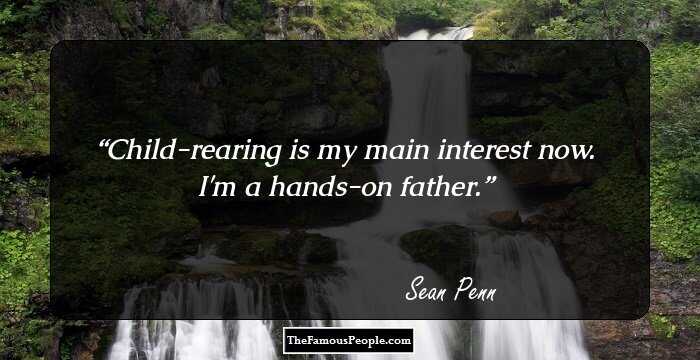 Child-rearing is my main interest now. I'm a hands-on father. 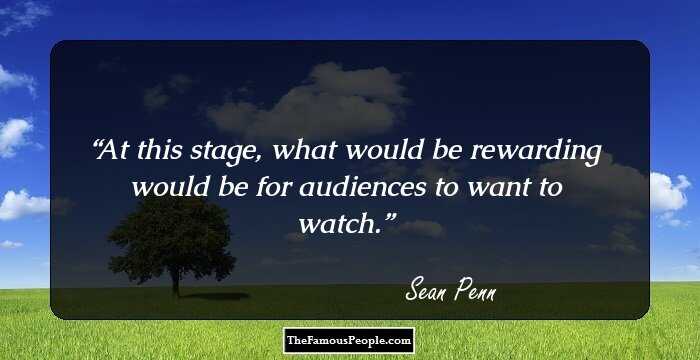 At this stage, what would be rewarding would be for audiences to want to watch. 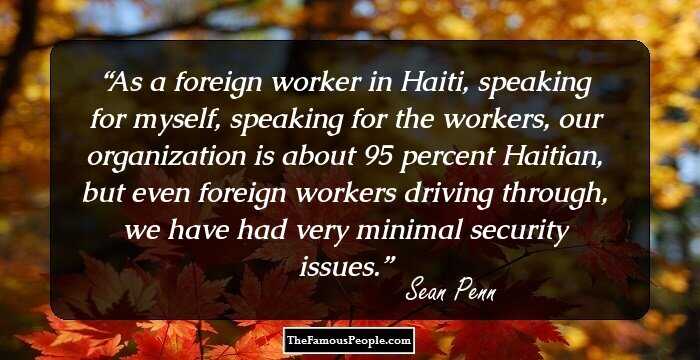 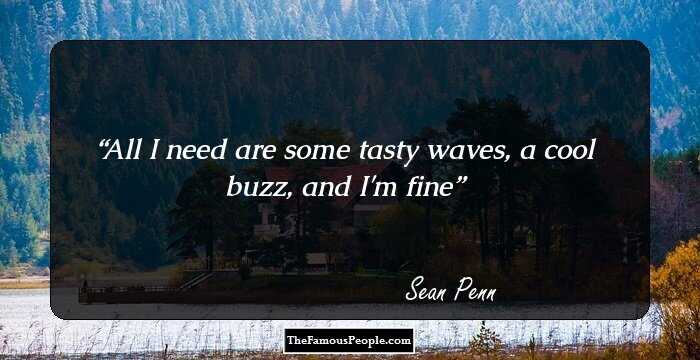 All I need are some tasty waves, a cool buzz, and I'm fine

I do not believe in a simplistic and inflammatory view of good and evil. I believe this is a big world full of men, women, and children who struggle to eat, to love, to work, to protect their families, their beliefs, and their dreams.

I don't believe there are climate skeptics. I think there are people who indulge in a culture of what can be reduced to Fox network thinking. That has nothing to do with the politics that apply to the protection of quality of life in any sense. It's like talking to a member of a cult.

I had a house burn down once, and everything in life burned except my family, and it was so liberating. I didn't have a bad moment about it. It sort of reinvigorated my interest in a lot of things. I wonder if there should be some kind of anarchy. 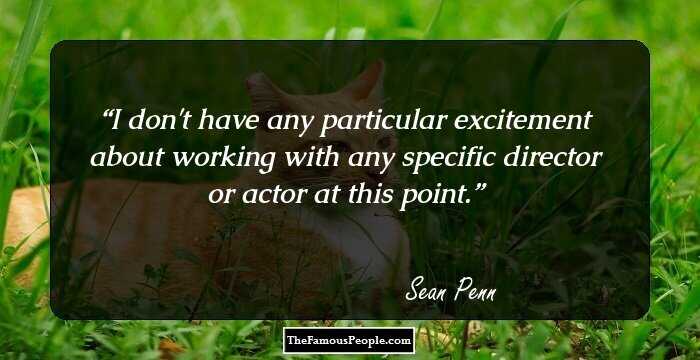 I don't have any particular excitement about working with any specific director or actor at this point. 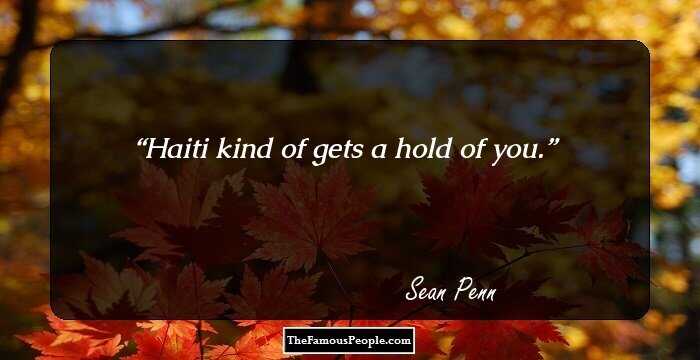 Haiti kind of gets a hold of you. 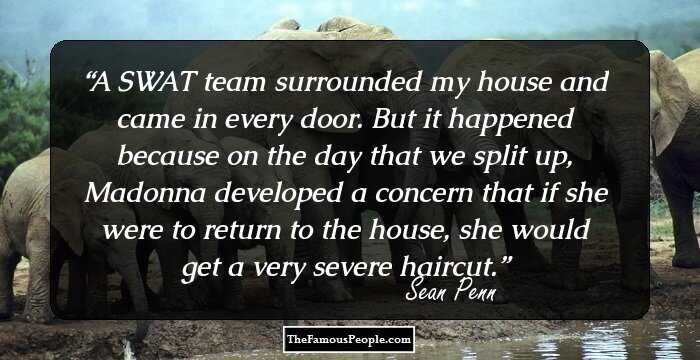 A SWAT team surrounded my house and came in every door. But it happened because on the day that we split up, Madonna developed a concern that if she were to return to the house, she would get a very severe haircut.

A child gets a fever in the United States and it's high enough and sustainable enough, all of us can bring a child to an emergency room. Most Haitians never had that opportunity. They didn't have the emergency room to bring them to. Virtually every time your child has 102 fever, you wait for it to die and you have no clean water to give it.

A clearer and more conventional narrative would have helped the film without, in my opinion, lessening its beauty and its impact. Frankly, I'm still trying to figure out what I'm doing there and what I was supposed to add in that context! What's more, Terry Malick himself never managed to explain it to me clearly.

And dressed her [Madonna] up like a turkey. After I read that stuff, I thought long and hard about what one would do to dress someone up like a turkey. And I nailed it. I figured you've got to get out the Playtex glove, blow it up and put the glove over the head.

I can tell you that my contribution based on my interpretation of the book is unchanged. The other things, in terms of doing the research and following the trail of it, were probably pretty similar to what I would have done then. I think that what makes me celebrate that it took the 10 years is the various other people and contributors that I ended up having on board.

I can't imagine being quite as lucky at any other time - I certainly never have been before. That goes right down from my producing partners to people like Eddie Vedder. But the two things that make me feel that this was meant to be now and not before was that the story itself has more resonance today - I find it a more important story today than it was then - and Emile.