Famous As: Founder of the hip-hop music label Def Jam
Born On: October 4, 1957
Born In: Queens, New York, United States
Age: 65 Years
Russell Simmons is a leading American entrepreneur, producer and author, who co-founded the hip hop label âDef Jamâ recordings. Simmons is also the chairman and CEO of âRush Communicationsâ. Russell Simmons is also a sought after name in the field of fashion and clothing, with his own lines- âPhat Farmâ, âArgylecultureâ, and âTantrisâ. His writing work reflects his thoughts on his experiences in the field of entertainment. Some of his notable works include hardbacks titled âLife and Def: Sexâ, âDrugsâ, âMoneyâ, â+ Godâ, âSuper Rich: Inside and Outâ and âSuccess Through Stillnessâ. With net worth of over $340 million, Simmons played his part in philanthropy as well. He is a key contributor for the âRush Philanthropic Arts Foundationâ and âDavid Lynch Foundationâ for Consciousness-Based Education and World Peace. Identifying himself as a Christian Yogi, Simmons is a practitioner of Jivamukti Yoga, which promotes veganism and eco-friendly activism. Simmons is also renowned for his support for the LGBT Community. Â Let us browse through some the most enlightening quotes and thoughts by Russell Simmons on issues pertaining to homosexuality, motivation, inspiration, environmentalism, veganism and many more.Â
Listed In:
Business People
Film & Theater Personalities
Activists 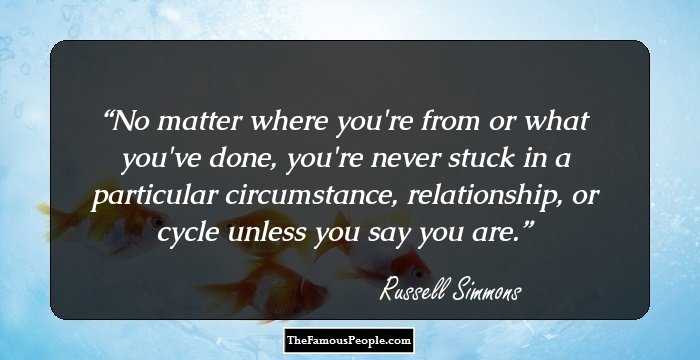 No matter where you're from or what you've done, you're never stuck in a particular circumstance, relationship, or cycle unless you say you are. 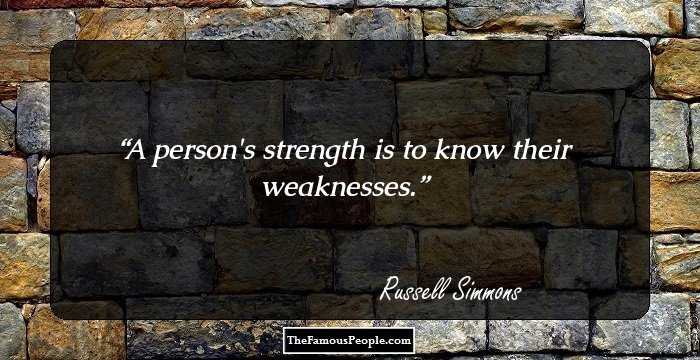 A person's strength is to know their weaknesses. 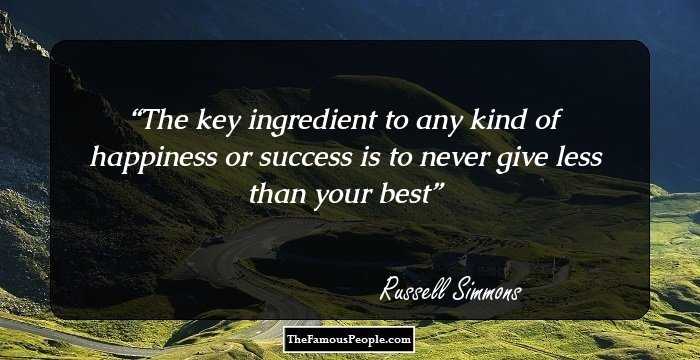 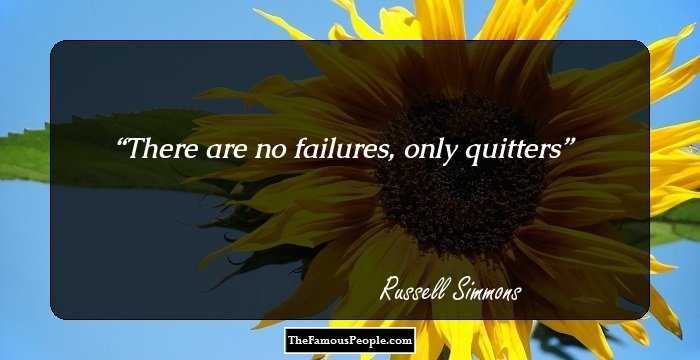 There are no failures, only quitters 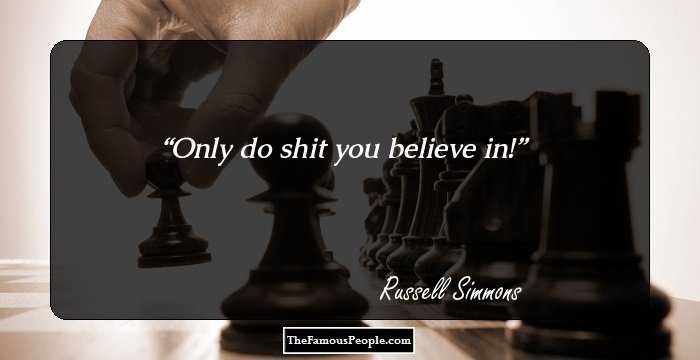 Only do shit you believe in! 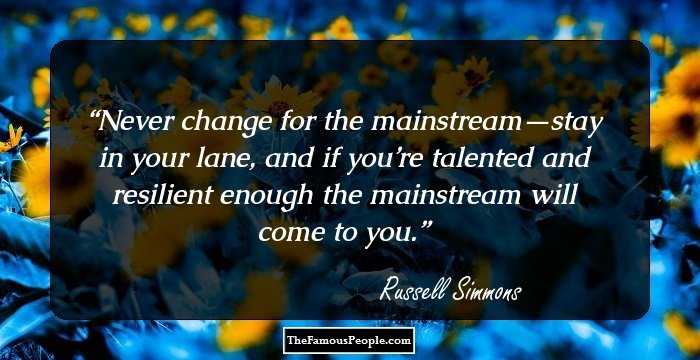 Never change for the mainstreamâstay in your lane, and if youâre talented and resilient enough the mainstream will come to you.

You Change Never Will
Russell Simmons 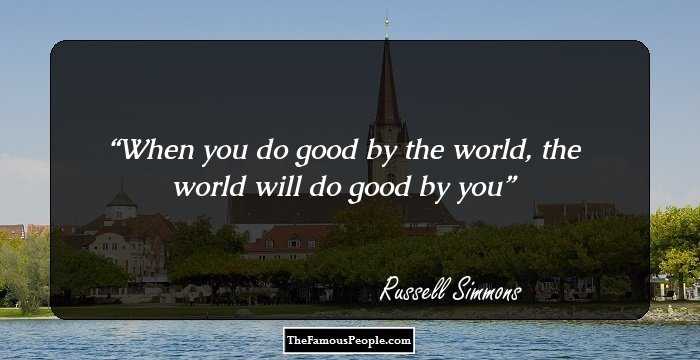 You Will
Russell Simmons 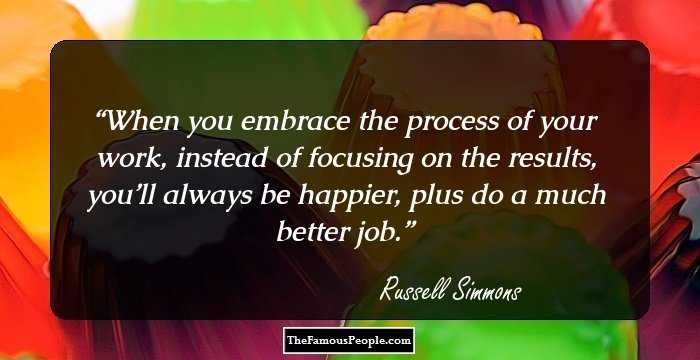 When you embrace the process of your work, instead of focusing on the results, youâll always be happier, plus do a much better job. 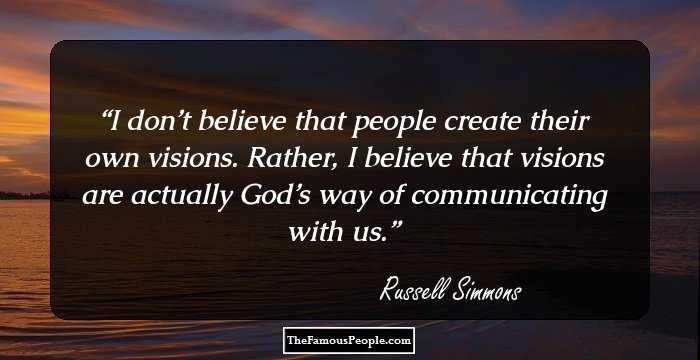 I donât believe that people create their own visions. Rather, I believe that visions are actually Godâs way of communicating with us. 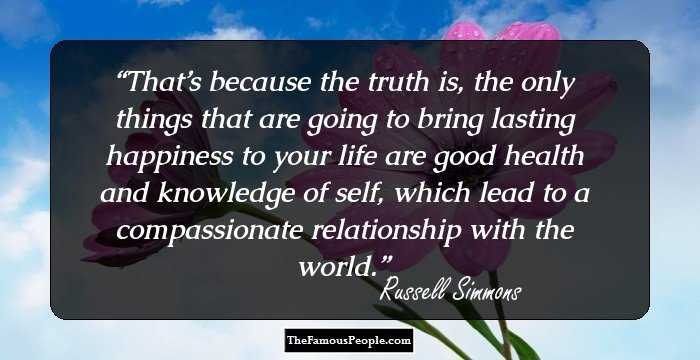 Thatâs because the truth is, the only things that are going to bring lasting happiness to your life are good health and knowledge of self, which lead to a compassionate relationship with the world.