Famous As: Actor & Comedian Best Known for His Role in the Sitcom 'Mr Bean'
Born On: January 6, 1955
Born In: County Durham, England, United Kingdom
Age: 67 Years
Rowan Atkinson is a celebrated English comedian, actor, and screenwriter. He is distinguished for his performances on the well-known sitcoms Mr Bean and Blackadder. He gained recognition with âNot The Nine OâClock News,â a BBC sketch comedy show for which he was also garnered with a âBAFTA Award.â Some of his other well-known works include âRowan Atkinson in Revue,â âMr Beanâs Holiday,â Never Say Never Again,â âThe Thin Blue Line,â âThe Secret Policemanâs Ball,â and âFour Weddings and A Funeral,â besides many others. We have rounded the most funny and interesting sayings and quotes by Rowan Atkinson which have been gathered from his movies, shows,Â  gigs, sitcoms, catchphrases, etc. Presenting some interesting quotes by Rowan Atkinson on prejudice, ideas, offense, oppression, humor, criticism, frustration, obstacles, etc.
Listed In:
Actors
Film & Theater Personalities
Comedians 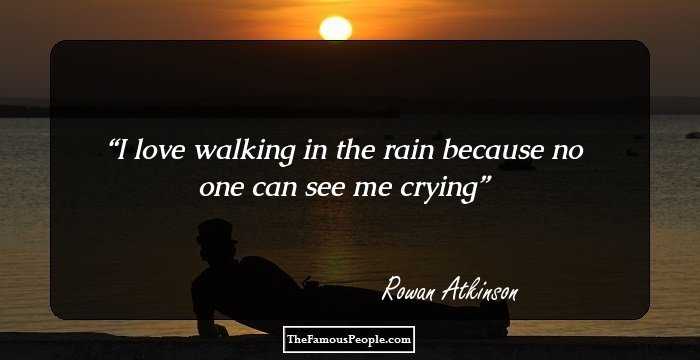 Me Love I
Rowan Atkinson 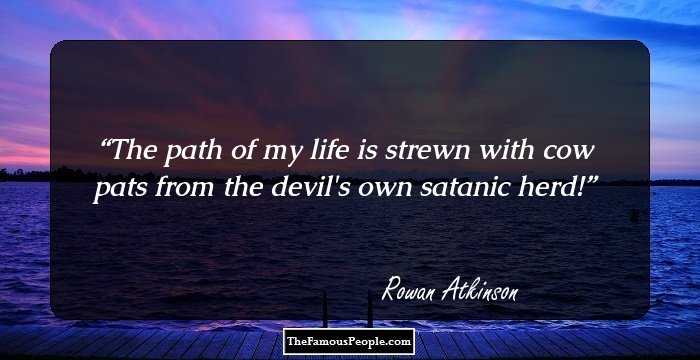 The path of my life is strewn with cow pats from the devil's own satanic herd! 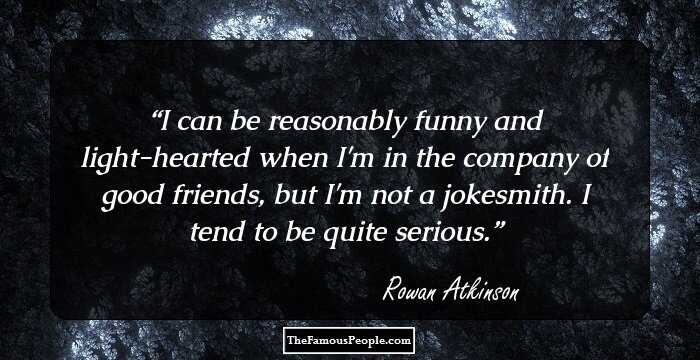 I can be reasonably funny and light-hearted when I'm in the company of good friends, but I'm not a jokesmith. I tend to be quite serious. 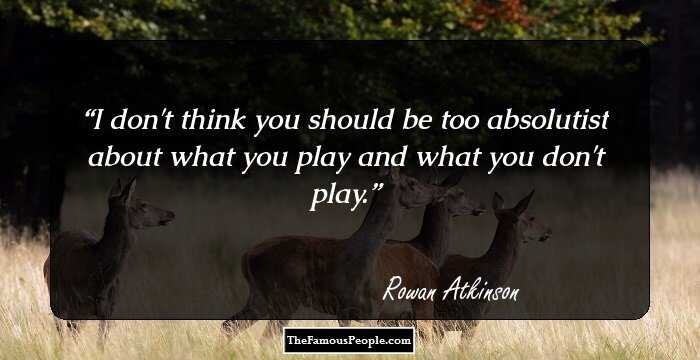 I don't think you should be too absolutist about what you play and what you don't play. 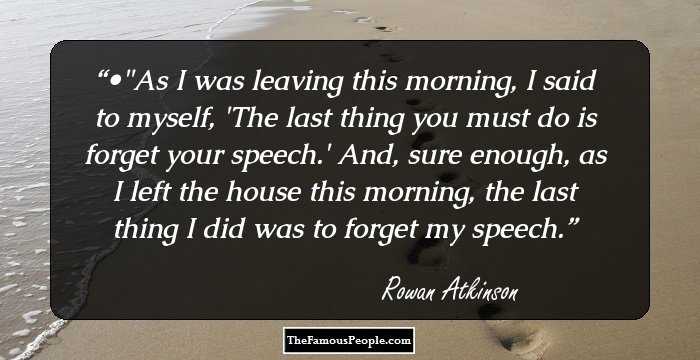 You I
Rowan Atkinson 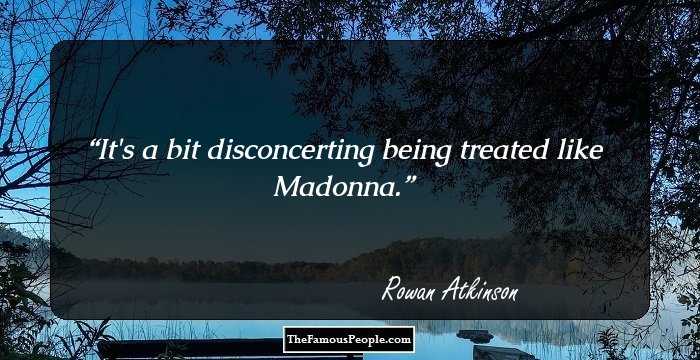 I have a problem with Porsches. They're wonderful cars, but I know I could never live with one. Somehow, the typical Porsche people-and I wish them no ill-are not, I feel, my kind of people. I don't go around saying that Porsches are a pile of dung, but I do know that psychologically I couldn't handle owning one. 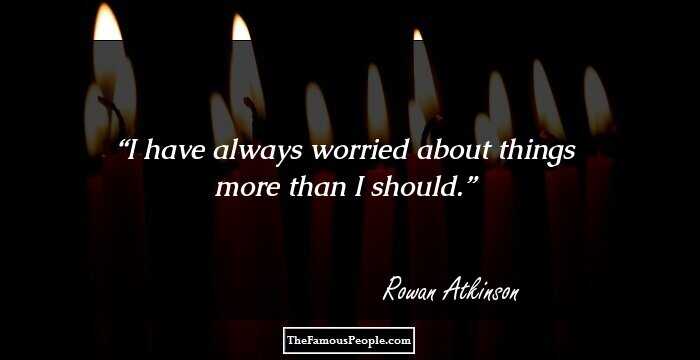 I have always worried about things more than I should. 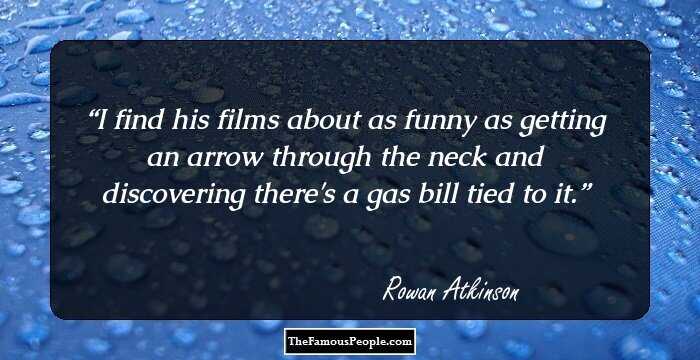 I find his films about as funny as getting an arrow through the neck and discovering there's a gas bill tied to it. 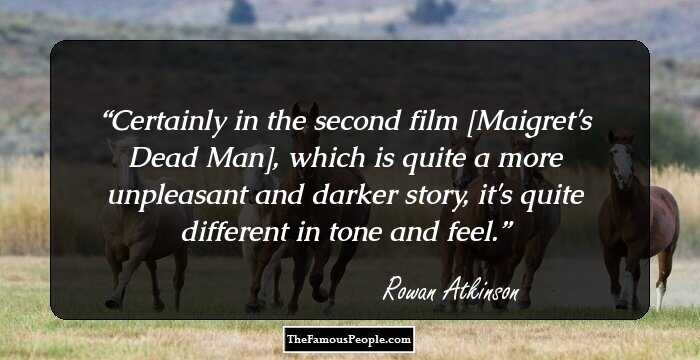 Certainly in the second film [Maigret's Dead Man], which is quite a more unpleasant and darker story, it's quite different in tone and feel.

But, actually, so many of the clerics that I've met, particularly the Church of England clerics, are people of such extraordinary smugness and arrogance and conceitedness who are extraordinarily presumptuous about the significance of their position in society.

I have always believed that there should be no subject about which one cannot make jokes, religion included. Clearly, one is always constricted by contemporary mores and trends because, after all, what one seeks above all is an appreciative audience. 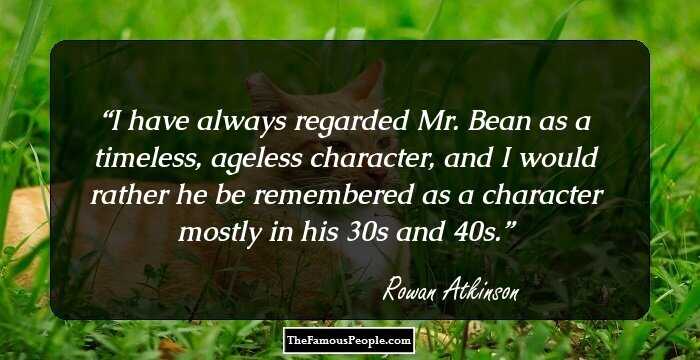 I have always regarded Mr. Bean as a timeless, ageless character, and I would rather he be remembered as a character mostly in his 30s and 40s. 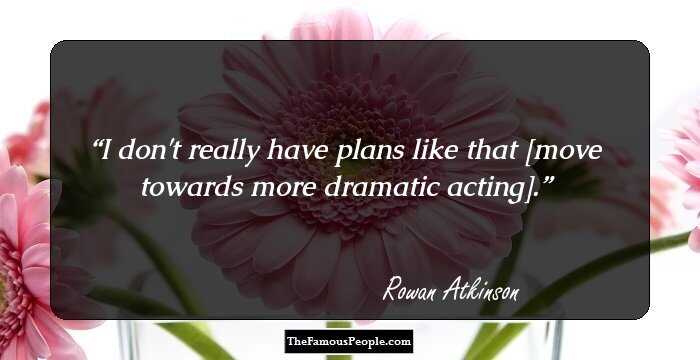 I don't really have plans like that [move towards more dramatic acting]. 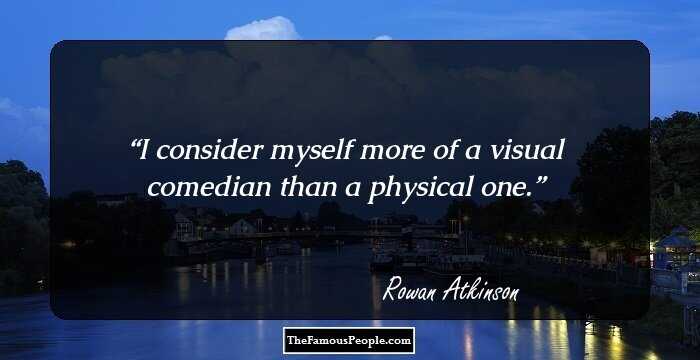 I consider myself more of a visual comedian than a physical one. 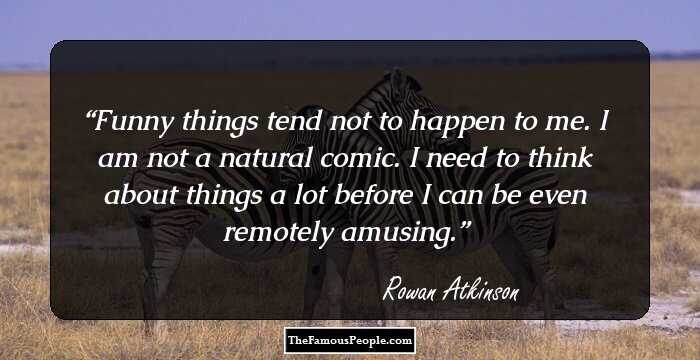 Funny things tend not to happen to me. I am not a natural comic. I need to think about things a lot before I can be even remotely amusing. 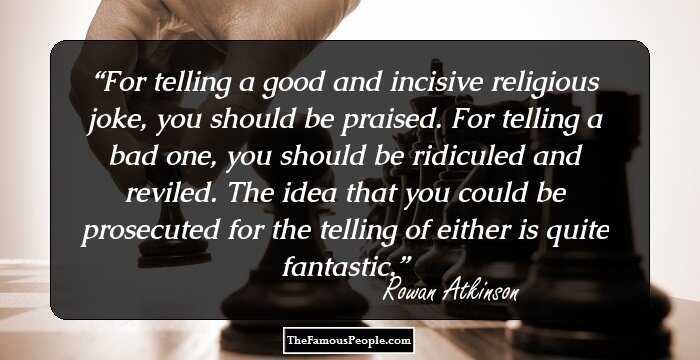 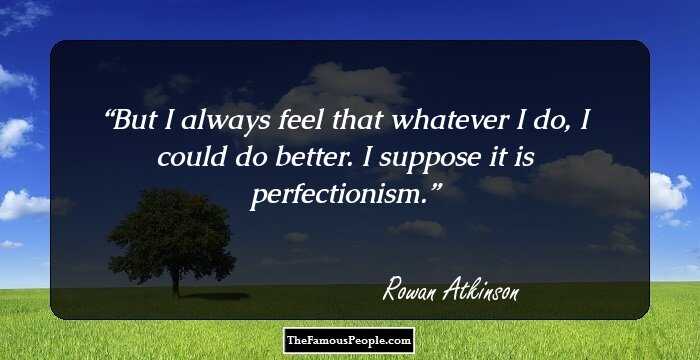 But I always feel that whatever I do, I could do better. I suppose it is perfectionism. 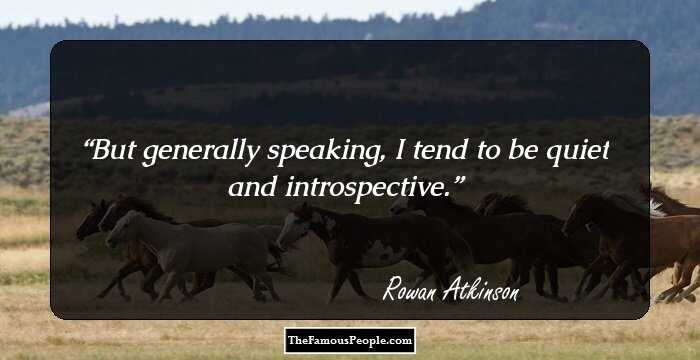 But generally speaking, I tend to be quiet and introspective. 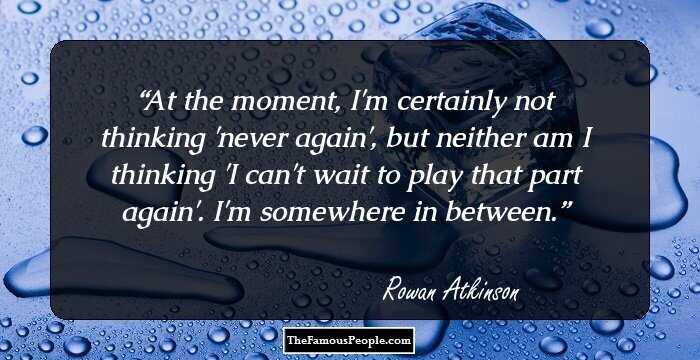 At the moment, I'm certainly not thinking 'never again', but neither am I thinking 'I can't wait to play that part again'. I'm somewhere in between. 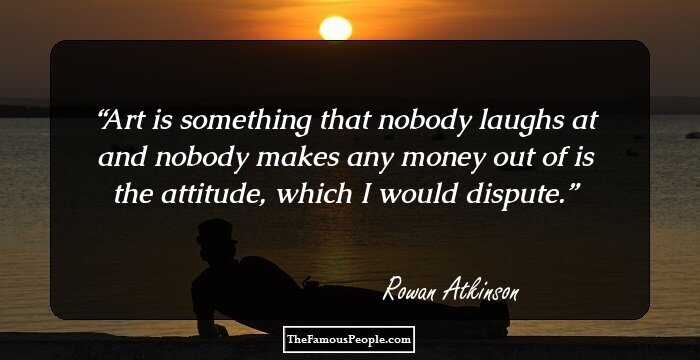 Art is something that nobody laughs at and nobody makes any money out of is the attitude, which I would dispute. 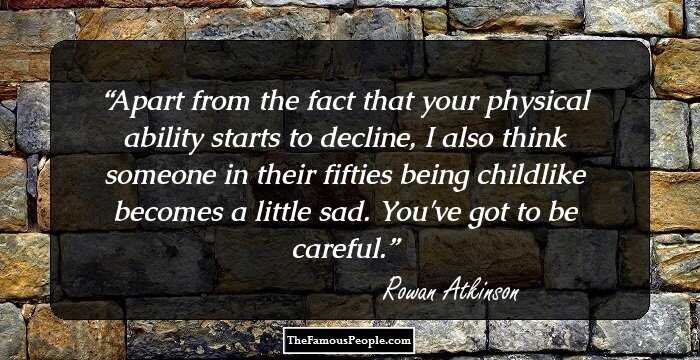 Apart from the fact that your physical ability starts to decline, I also think someone in their fifties being childlike becomes a little sad. You've got to be careful. 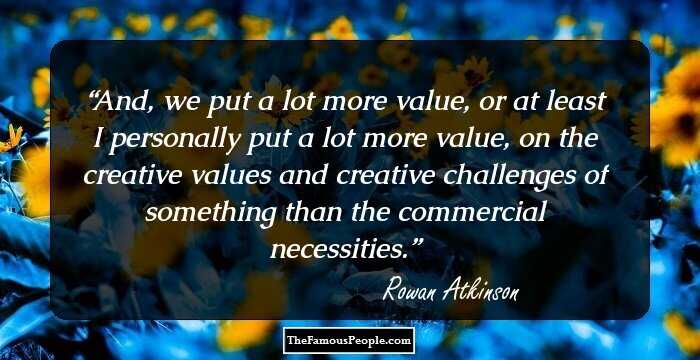 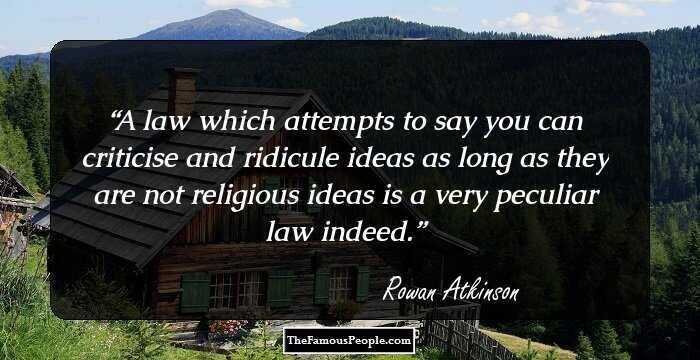 A law which attempts to say you can criticise and ridicule ideas as long as they are not religious ideas is a very peculiar law indeed.

Although the great frustration about this [role] is the fact that there's one thing Maigret never does, and that's drive. He's always driven, or he takes the train, or he gets the bus. I was saying 'Well, why don't we ring the changes for the 21st Century, and stick him in the car?'. [Executive Producer and son of the author, John Simenon] said, 'Well, you can if you want, but there'll be lots of people who won't like it'. So he's a non-driver ... But no, Top Gear was never a consideration for me; and neither was I asked

Having spent a substantial part of my career parodying religious figures from my own Christian background, I am aghast at the notion that it could, in effect, be made illegal to imply ridicule of a religion or to lampoon religious figures.

I enjoy racing historic motorcars from the '50s and '60s. The seed of my interest was planted when I was about 12 years old and took over my mother's Morris Minor. I drove it around my father's farm. But my favorite car is still a McLaren F1, which I have had for 10 years.