Famous As: Musician
Born On: June 30, 1968
Born In: New Orleans, Louisiana, United States
Founder / Co Founder: Housecore Records
Age: 54 Years
Phil Anselmo is an American heavy metal musician. He is best known as the lead vocalist of bands, such as âPantera,â âDown,â and âSuperjoint Ritual.â His joined his first band, âSamhain,â during his teenage years. His next band was âRazor White.âAnselmo was 19 when he joined âPantera.â The bandâs fifth album, âCowboys from Hell,â brought Phil into limelight. The band released 9 studio albums before its members went their separate ways. By that time, Phil was already working on his new project âSuperjoint Ritual. âThe band released three studio albums. In 1991, Anselmo focused on building his newly-launched heavy metal band âDown.â We have curated some of Phil Anselmo quotes on passion, people, world, lessons, mind, earth, music, etc.
Listed In:
Musicians
Singers 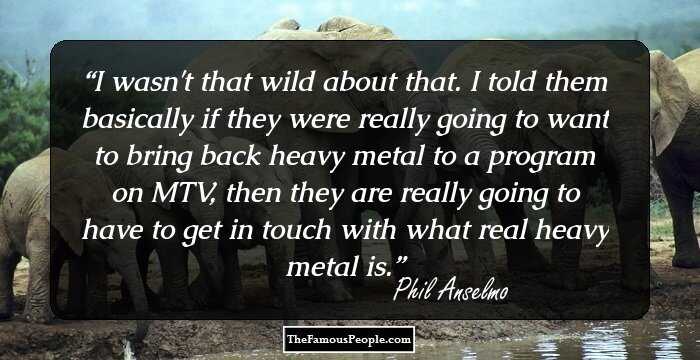 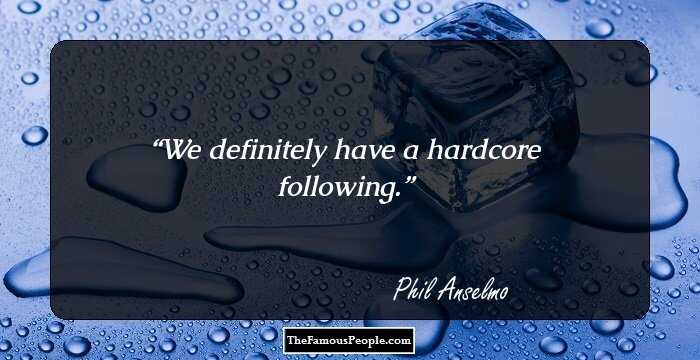 We definitely have a hardcore following. 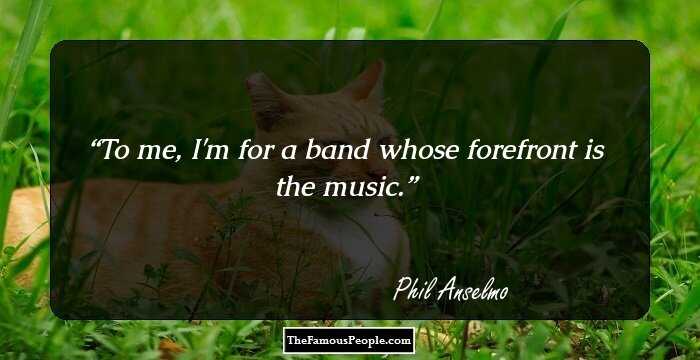 To me, I'm for a band whose forefront is the music. 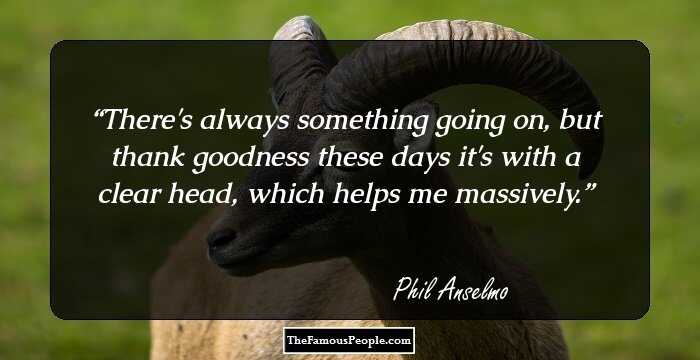 There's always something going on, but thank goodness these days it's with a clear head, which helps me massively. 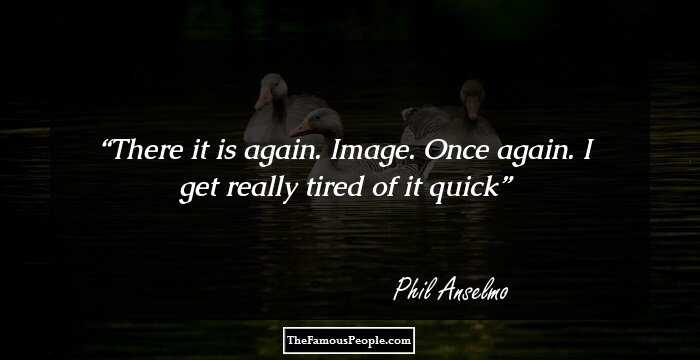 There it is again. Image. Once again. I get really tired of it quick 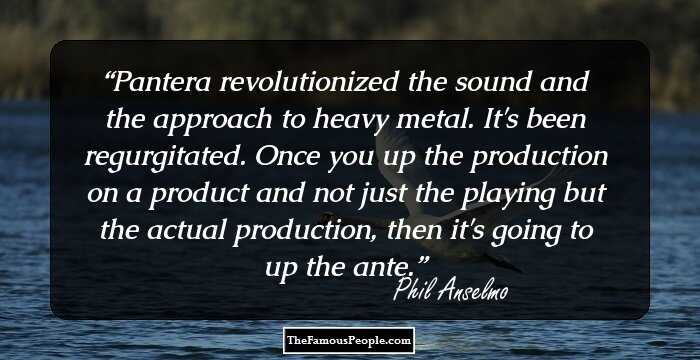 Pantera revolutionized the sound and the approach to heavy metal. It's been regurgitated. Once you up the production on a product and not just the playing but the actual production, then it's going to up the ante. 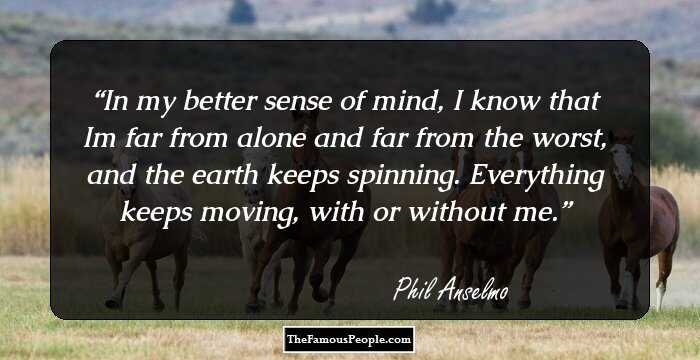 In my better sense of mind, I know that Im far from alone and far from the worst, and the earth keeps spinning. Everything keeps moving, with or without me. 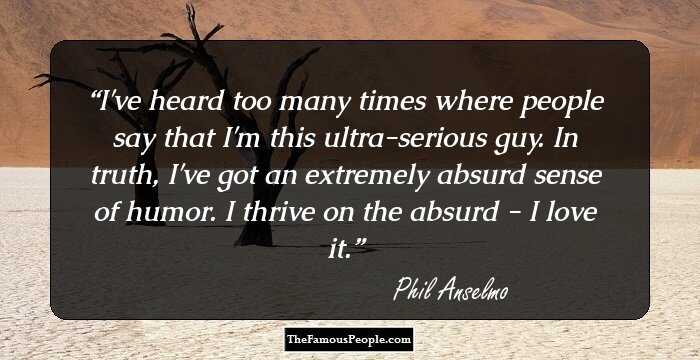 I've heard too many times where people say that I'm this ultra-serious guy. In truth, I've got an extremely absurd sense of humor. I thrive on the absurd - I love it. 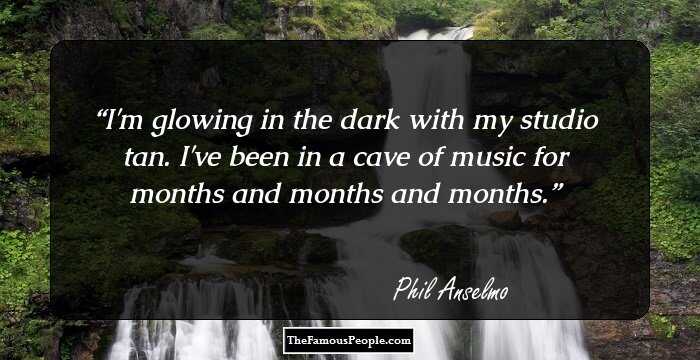 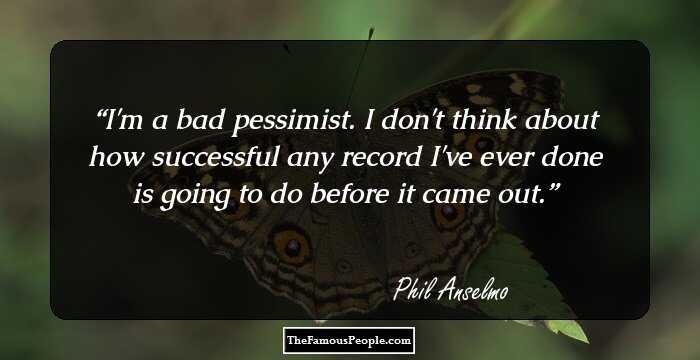 I'm a bad pessimist. I don't think about how successful any record I've ever done is going to do before it came out. 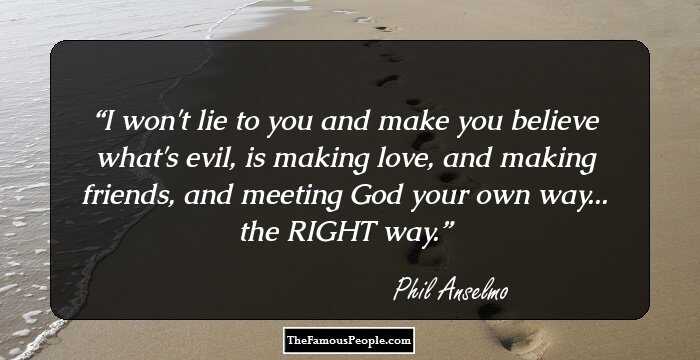 I won't lie to you and make you believe what's evil, is making love, and making friends, and meeting God your own way... the RIGHT way. 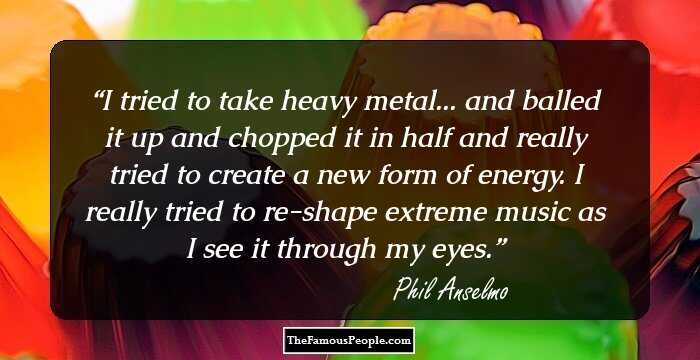 I tried to take heavy metal... and balled it up and chopped it in half and really tried to create a new form of energy. I really tried to re-shape extreme music as I see it through my eyes. 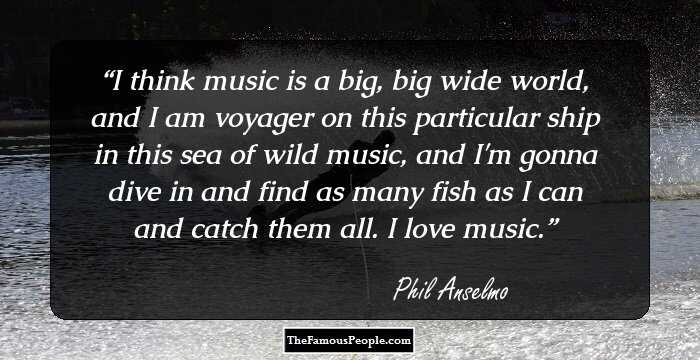 I think music is a big, big wide world, and I am voyager on this particular ship in this sea of wild music, and I'm gonna dive in and find as many fish as I can and catch them all. I love music. 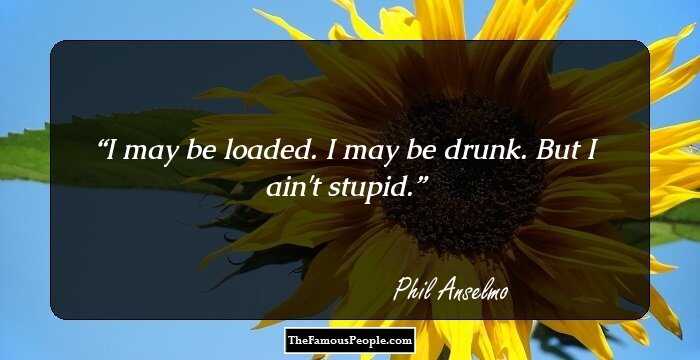 I may be loaded. I may be drunk. But I ain't stupid. 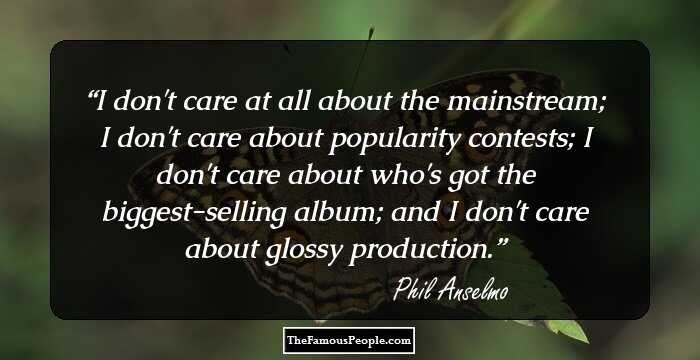 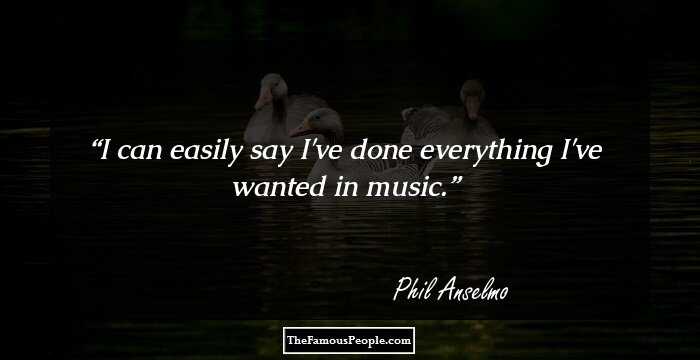 I can easily say I've done everything I've wanted in music. 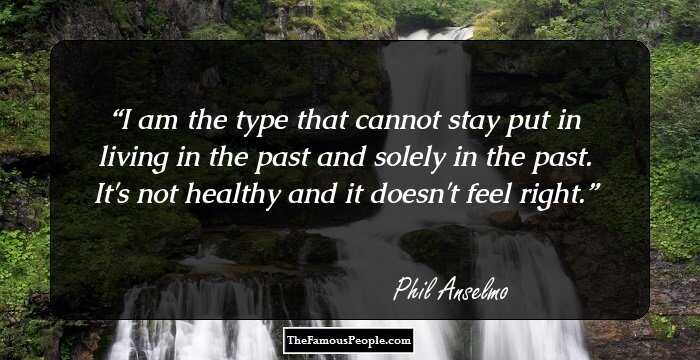 I am the type that cannot stay put in living in the past and solely in the past. It's not healthy and it doesn't feel right. 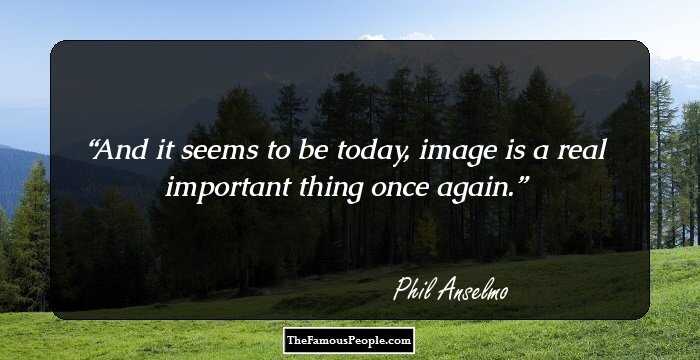 And it seems to be today, image is a real important thing once again.

Communication between band-mates is imperative. Communication is the key to any healthy relationship. If I need to be checked, I expect to hear it put in plain words what my faults are, and give my band-mates the ultimate consideration by shutting up and listening, then acting on the advice given. Same goes for anyone else in any band.

Down is an incredibly important band to me. And there's one other project that may be a little tough for people to understand - it's not sonically heavy, but subject-wise it's absolutely heavy. It's a band that I've been in for many, many yearsm and I've just been waiting for the right itme, and boy, it sure is the right time. So, yeah, you will hear music from Philip Anselmo again, and it ain't gonna be nothing nice.

I guess I've never been introduced properly to Pink Floyd. I know they're great, don't get me wrong. Excellent, excellent musicians; great band; awesome harmony; great song writers; I just don't know anything besides, I guess, the popular songs on the radio.

Music is there for us to explore. To intentionally limit yourself to one, two, or three genres is limitation at its worst. Music is huge; its a gigantic history lesson, and if you are true music fan or a musician, you should explore it. Its all right there in front of us.

Speaking of stage freight. I was terrified! It was in NOLA at an all ages show. I was wearing Jeans, a Van Halen t-shirt, and a bandana on my neck. Once I gripped that microphone stand, I did not let go! I plugged my microphone into a guitar FX pedal. Then at the end of the a Black Sabbath song we were covering, I hit the guitar pedal. It was horrific!

To do an extreme metal record is something that is well within my capacity as a musician to write stuff out of the box, write stuff that's probably more extreme than the band I'm in at the present time, and it's something that needs to come out of me one way or another.

We, PANTERA, had the greatest, the most intense, dedicated fans I've ever seen in my ******* life. And I really hope with all my heart that one day, people - especially our fans and my friends - can see clearly enough to think for themselves and really realize that I have nothing but love for them. I've just been going through personal hell since December. Once again, it's very hard to talk about, man. You know, my heart is in a thousand pieces a day.