Born On: October 26, 1959
Died On: February 21, 2022
Born In: North Adams, Massachusetts
Founder / Co Founder: Partners In Health(PIH)
Died At Age: 62
Paul Farmer is a renowned American physician known for providing good medical facilities to the needy through his health organization called âPartners In Health (PIH)â. He moved to various places as a child and met Haitian workers and was fascinated by them. After completing his medical studies he moved to Haiti, which was facing a huge scarcity of medical facilities. There he collaborated with a few locals to open a small clinic called âClinique Bon Sauveurâ which aimed at serving the needy. The slums were facing an outbreak of the fatal disease AIDS and he played a significant role in minimizing its effects. He went on to form the âPartners in Health (PIH)â which aimed to serve better medical facilities. He took various measures in increasing the number of vaccines in the area, thereby decreasing infant mortality and educating the women about AIDS. The success rate of these measures compelled WHO to implement them in various countries and he was also appointed as the âDeputy UN Special Envoy for Haitiâ. He was honored with various awards for his significant contributions to the society including âS. Roger Horchow Award for Greatest Public Service by a Private Citizenâ. We have compiled notable quotations and sayings by the celebrated anthropologist. Paul Farmerâs quotes and thoughts define the forgotten proverb that âHumanity is the best religion for mankindâ.
Listed In:
Physicians
Intellectuals & Academics 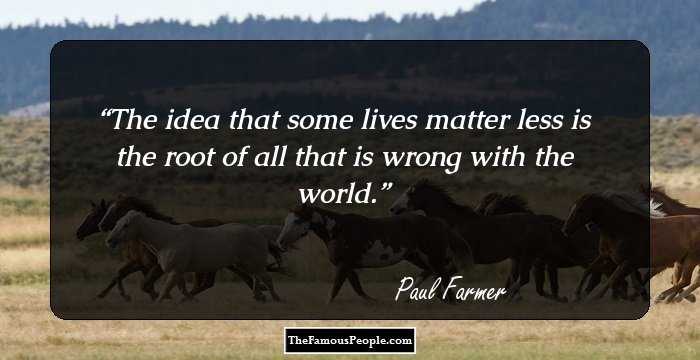 The idea that some lives matter less is the root of all that is wrong with the world. 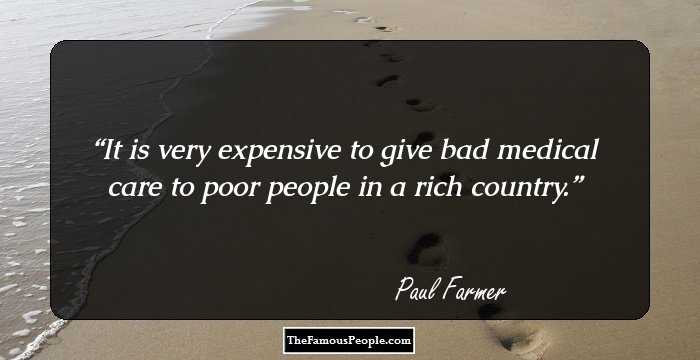 It is very expensive to give bad medical care to poor people in a rich country. 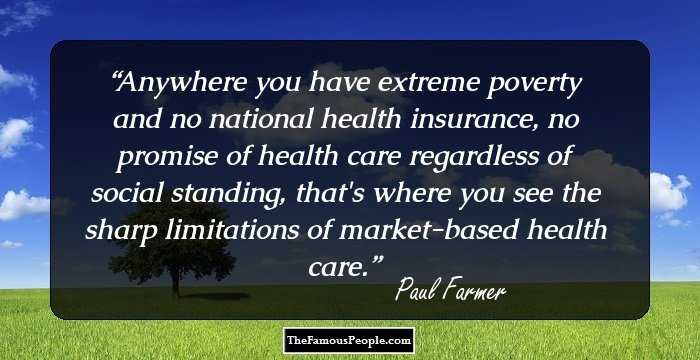 Anywhere you have extreme poverty and no national health insurance, no promise of health care regardless of social standing, that's where you see the sharp limitations of market-based health care. 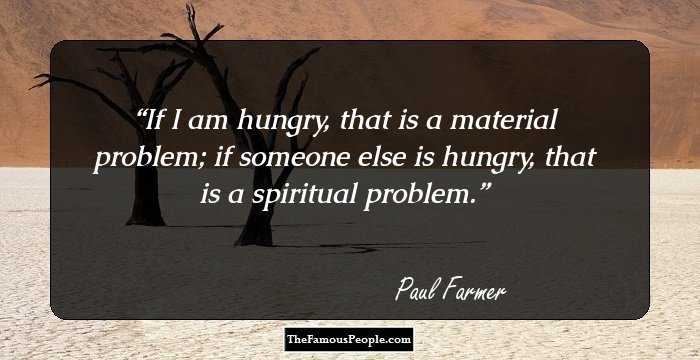 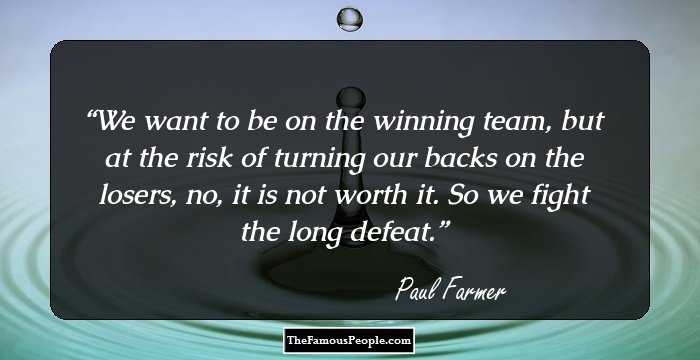 We want to be on the winning team, but at the risk of turning our backs on the losers, no, it is not worth it. So we fight the long defeat. 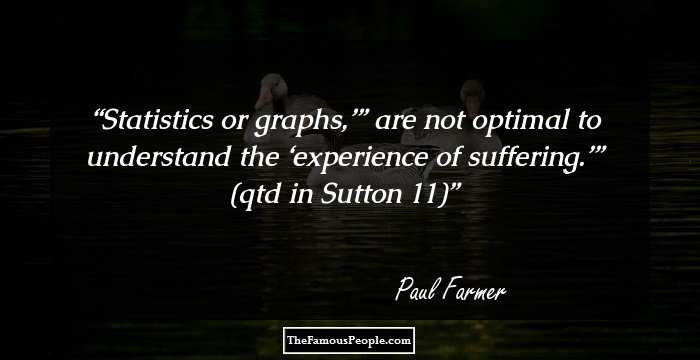 Statistics or graphs,’” are not optimal to understand the ‘experience of suffering.’” (qtd in Sutton 11) 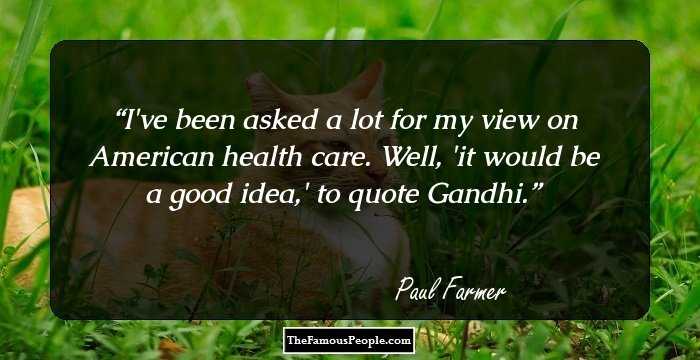 I've been asked a lot for my view on American health care. Well, 'it would be a good idea,' to quote Gandhi. 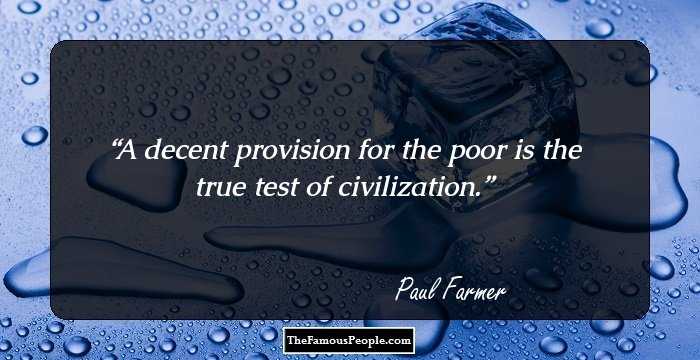 A decent provision for the poor is the true test of civilization. 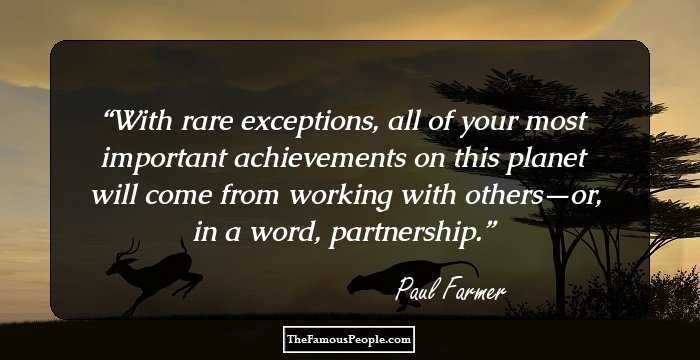 With rare exceptions, all of your most important achievements on this planet will come from working with others—or, in a word, partnership. 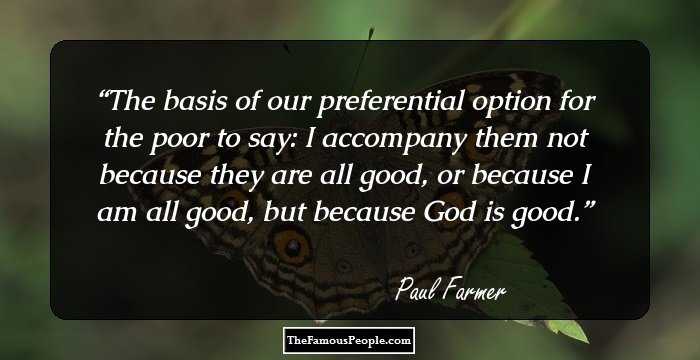 The basis of our preferential option for the poor to say: I accompany them not because they are all good, or because I am all good, but because God is good. 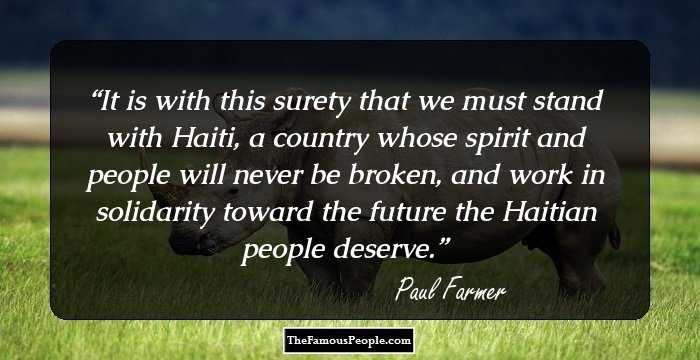 It is with this surety that we must stand with Haiti, a country whose spirit and people will never be broken, and work in solidarity toward the future the Haitian people deserve. 7 Inspiring Quotes By William Glasser For Your Dose Of Happiness 100 Famous Quotes by Eric Hoffer, The Author of The True Believer 19 Interesting Quotes By Bob Black That Challenge The Existing Norms 56 Great Quotes By Alan Greenspan For The Economist In You