Oswald Mosley was a prominent British politician. He first shot to fame as a âMinister of Parliamentâ in the 1920s. He became the leader of the âBritish Union of Fascistsâ after he became disenchanted with mainstream politics. He was a baronet but never knighted. In 1929-31, he served as âChancellor of the Duchy of Lancaster.â Here is a collection of popular sayings by Oswald Mosley which has been excerpted from his speeches, thoughts and public utterances. Have a look at Oswald Mosley quotes on fighting, fascism, struggle, democracy, people, world, movement, change, politics, art, ideas, risk, power, British, finances, marriage, job, men, nationalism, communism, freedom, family, values, wages, government, etc. 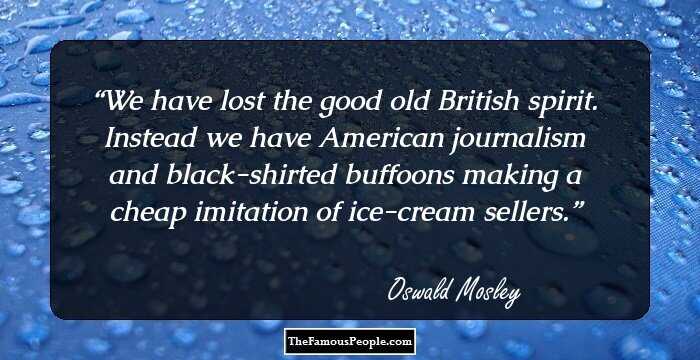 We have lost the good old British spirit. Instead we have American journalism and black-shirted buffoons making a cheap imitation of ice-cream sellers. 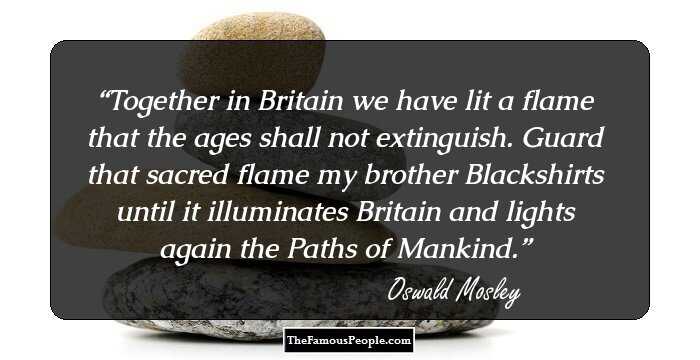 Together in Britain we have lit a flame that the ages shall not extinguish. Guard that sacred flame my brother Blackshirts until it illuminates Britain and lights again the Paths of Mankind. 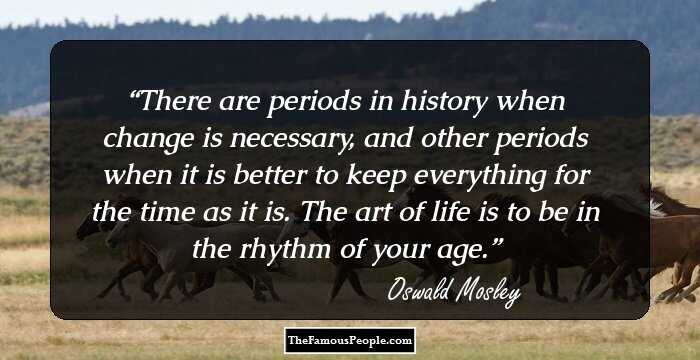 There are periods in history when change is necessary, and other periods when it is better to keep everything for the time as it is. The art of life is to be in the rhythm of your age. 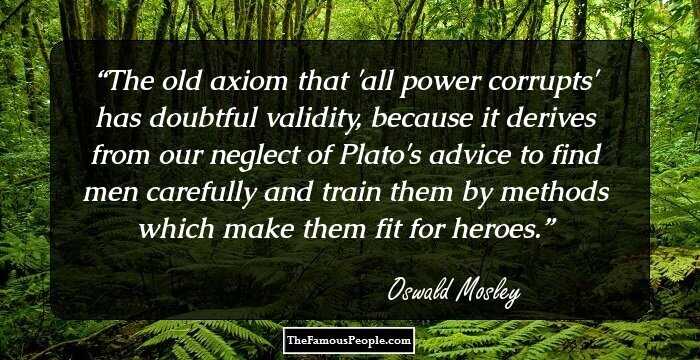 The old axiom that 'all power corrupts' has doubtful validity, because it derives from our neglect of Plato's advice to find men carefully and train them by methods which make them fit for heroes. 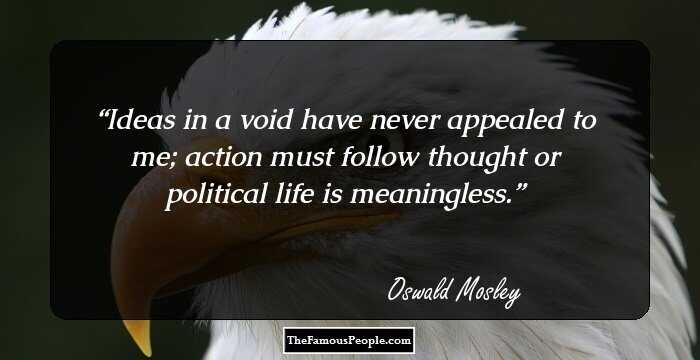 Ideas in a void have never appealed to me; action must follow thought or political life is meaningless. 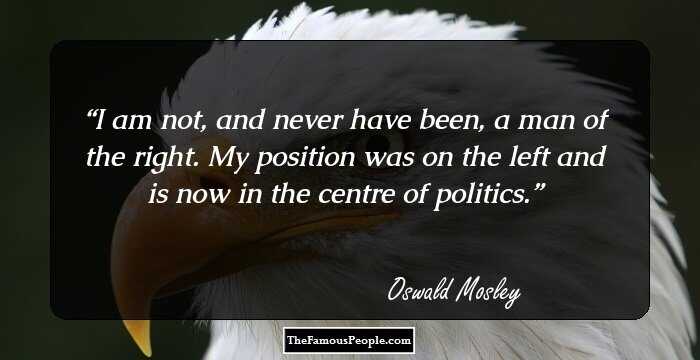 I am not, and never have been, a man of the right. My position was on the left and is now in the centre of politics. 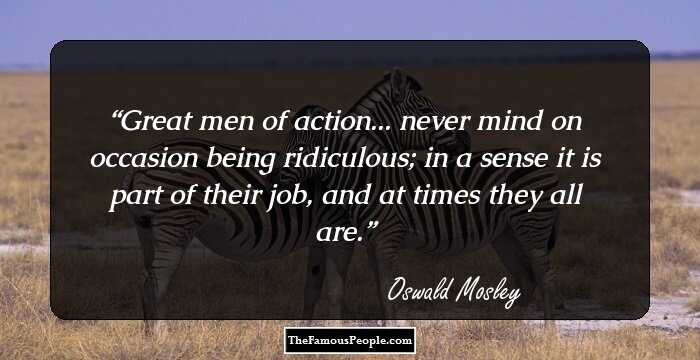 Great men of action... never mind on occasion being ridiculous; in a sense it is part of their job, and at times they all are. 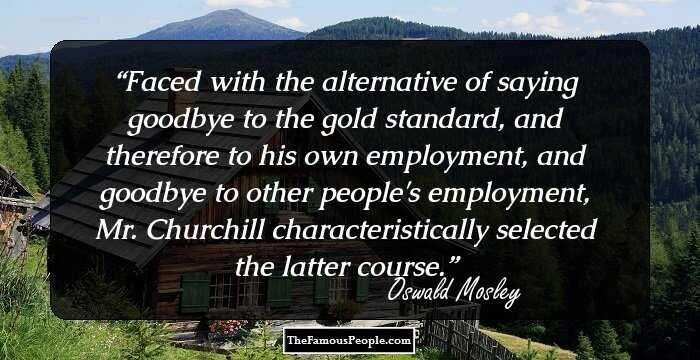 Faced with the alternative of saying goodbye to the gold standard, and therefore to his own employment, and goodbye to other people's employment, Mr. Churchill characteristically selected the latter course. 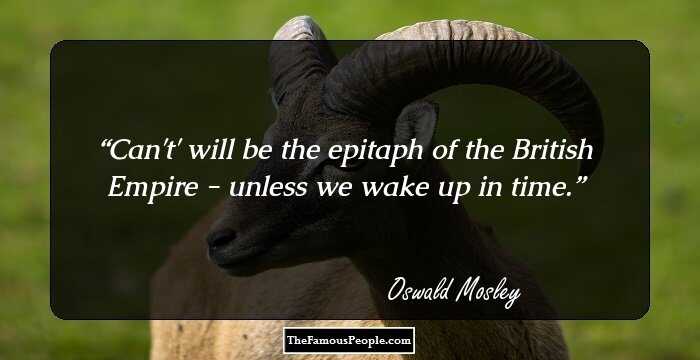 Can't' will be the epitaph of the British Empire - unless we wake up in time. 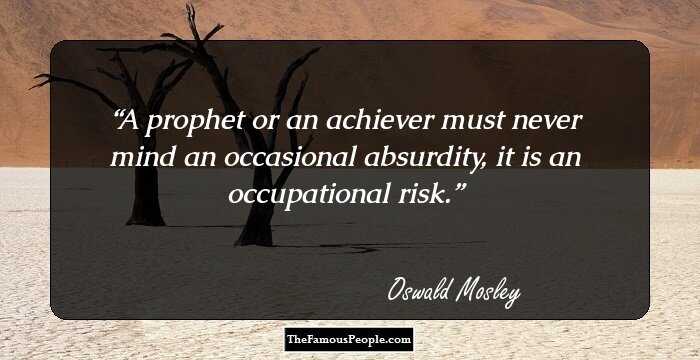 A prophet or an achiever must never mind an occasional absurdity, it is an occupational risk.

Anyone who knows how difficult it is to keep a secret among three men - particularly if they are married - knows how absurd is the idea of a worldwide secret conspiracy consciously controlling all mankind by its financial power; in real, clear analysis.

Fascism was an explosion against intolerable conditions, against remediable wrongs which the old world failed to remedy. It was a movement to secure national renaissance by people who felt themselves threatened with decline into decadence and death and were determined to live, and live greatly.

Those who march with us will certainly face abuse, misunderstanding, bitter animosity, and possibly the ferocity of struggle and of danger. In return, we can only offer to them the deep belief that they are fighting that a great land may live.